Gettysburg Licensed Battlefield Guides Garry Adelman (left) and Tim Smith (right) are our hosts for the Harvest of Death Series. This photograph was taken south of the Chambersburg Pike on the first day’s battlefield in the location for Video #29 in this series. The Chambersburg Pike and the bridge over the Railroad Cut on Reynolds Avenue can be seen in the right background.This view was taken facing northwest in August of 2016. 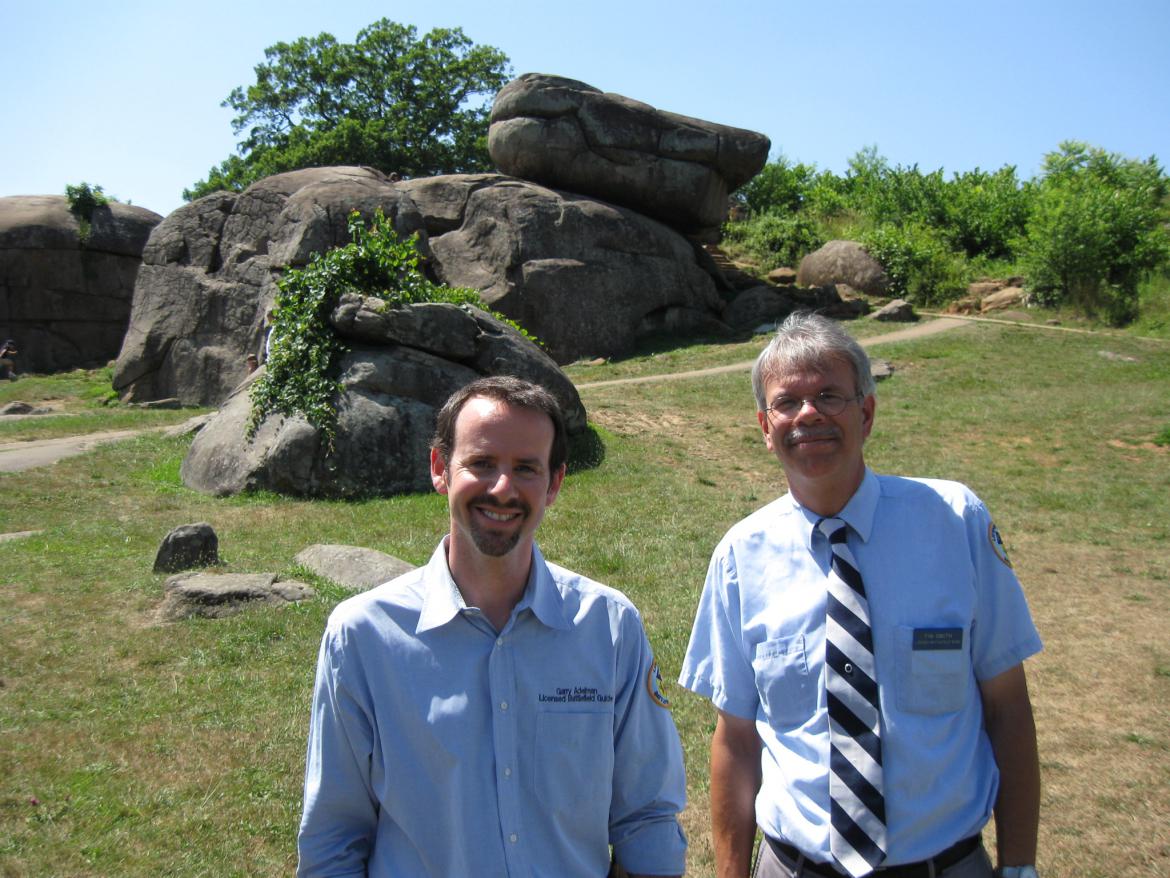 Garry Adelman (left) is the Director of History and Education for the Civil War Trust. He earned his B.A. in business from Michigan State University and his M.A. in history at Shippensburg University of Pennsylvania. He is the award-winning author, co-author or editor of Gettysburg in 3-D (2013) Antietam in 3-D (2012), Manassas Battlefields Then & Now (2011), The Civil War 150 (2011) Antietam: Then & Now (2005), The Myth of Little Round Top (2003), The Early Gettysburg Battlefield (2001), Little Round Top: A Detailed Tour Guide (2000), and Devil’s Den: A History and Guide (1997) as well as nine Civil War image booklets. He has published articles in Civil War Times, Civil War Monitor, Gettysburg Magazine, Civil War News, Hallowed Ground and others. He has conceived and drafted the text for wayside exhibits at eight battlefields, has given thousands of battlefield tours at some 50 sites and has lectured at hundreds of locations across the country including the National Archives and the Smithsonian. He has appeared as a speaker on the BBC, C-Span, Pennsylvania Cable Network, American Heroes Channel, and on HISTORY where he was a chief consultant and talking head on the Emmy Award-winning show Gettysburg (2011) and Blood and Glory: The Civil War in Color (2015). He is a founder and longtime vice president of the Center for Civil War Photography and is a Licensed Battlefield Guide at Gettysburg. If you’d like to see more from Garry, be sure to visit his Facebook page. Garry and Tim are standing by some of the most recognizable rocks of the Devil’s Den area for their series on Devil’s Den in 2011.This view was taken facing northwest at approximately 3:00 PM on Friday, July 1, 2011. 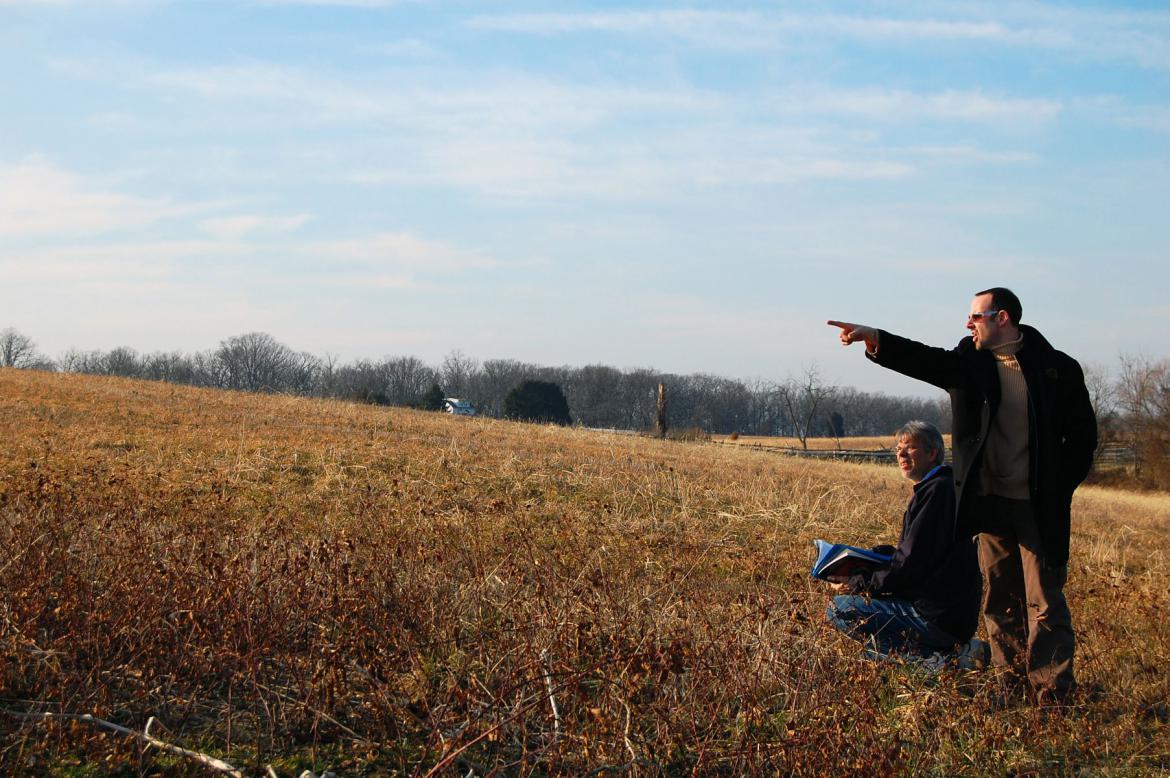 Timothy H. Smith (kneeling) is a native of Baltimore and a life long student of the American Civil War. He is employed as a Licensed Battlefield Guide at the Gettysburg National Military Park and as a research historian at the Adams County Historical Society. He is an instructor for the Gettysburg Elderhostel and teaches classes on the battle and local history at the Gettysburg Campus of the Harrisburg Area Community College. Tim has written numerous articles and authored or co-authored ten books on Gettysburg related topics, including John Burns: The Hero of Gettysburg (2000). He has lectured extensively at Civil War Round Tables and Seminars and has appeared on several television documentaries, including the Unknown Civil War and the popular PCN Gettysburg Battle Walk series. Tim and Garry are pictured here investigating a possible location for the Harvest of Death photo series on the Rose Farm property in 2012.This view was taken at approximately 4:25 PM on Wednesday, February 15, 2012 for Tim Smith’s series on Gettysburg Rock Carvings.
The locations for Videos #29 and #30 in this series are shown on this map (Video #1-28 were shown in previous posts). Previous posts in the Harvest of Death series can be found here.This map was created in a chair facing east on April 15, 2017.
In Video #29 Garry and Tim update us on the Harvest of Death series, discuss the prevalence of theories presented on social media, and explain their role in finding the Harvest of Death photographs.This video was taken facing northwest in August of 2016. 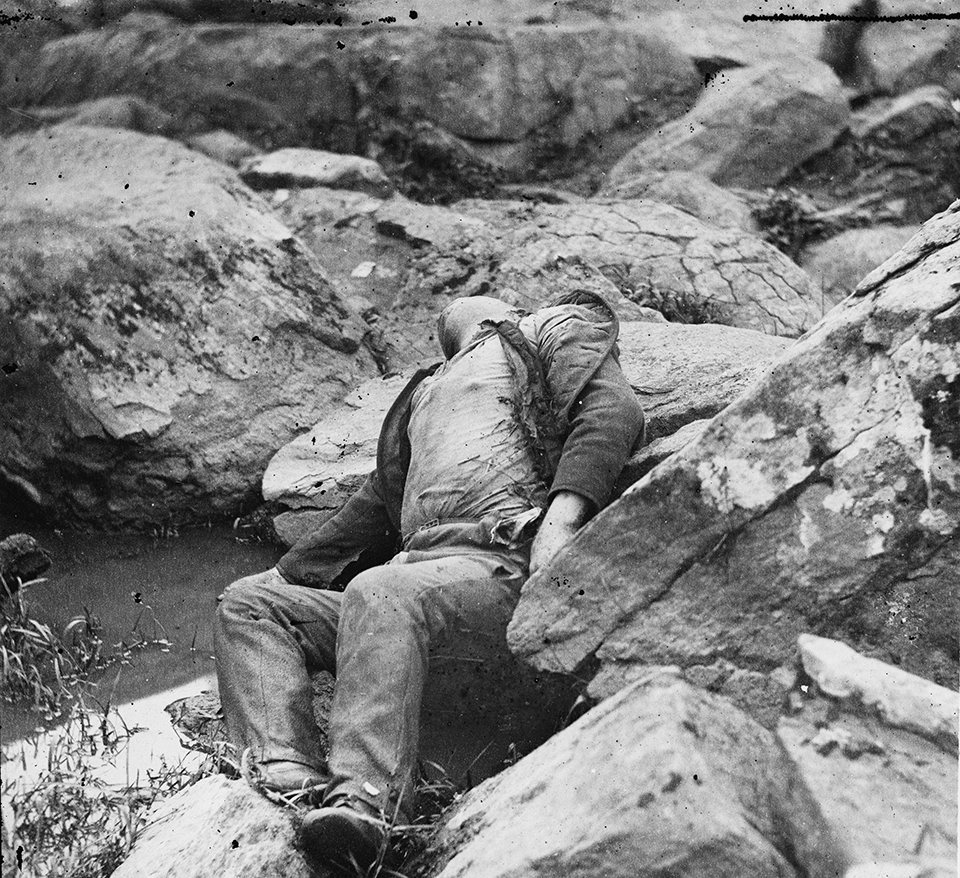 The “All Over Now” photo Garry mentions in Video 29.This view was taken in July of 1863 by Alexander Gardner and Co [LOC].
In Video #30 Garry and Tim discuss why they think the first day’s battlefield is an unlikely location for the Harvest of Death. This video was taken facing northwest in August of 2016. 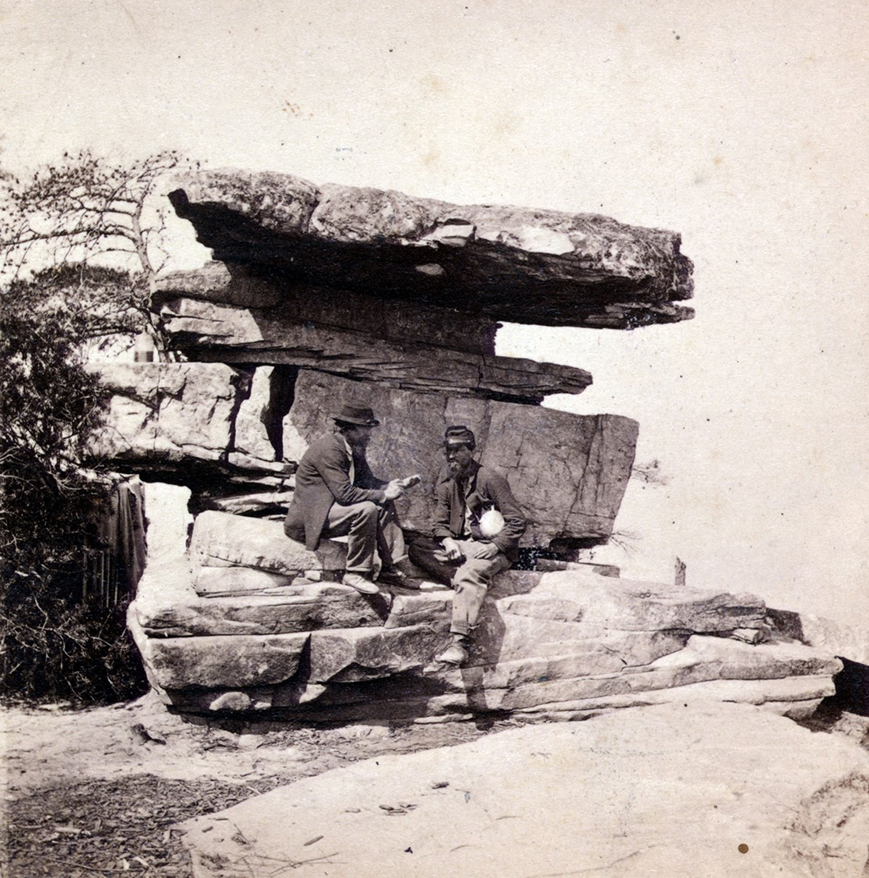 …where the modern view was a clear match.This image is courtesy of Garry Adelman.

…where as Garry put it, the modern view “just works.”This image is courtesy of Garry Adelman.