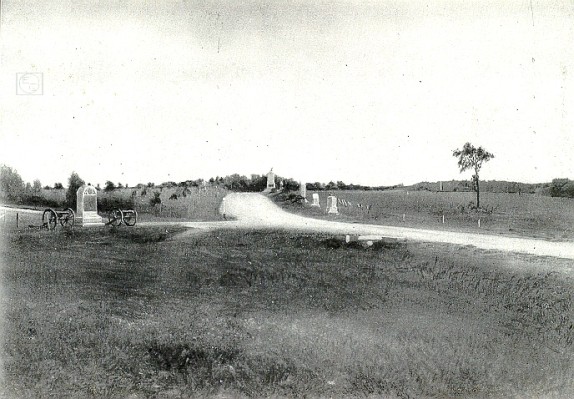 Gettysburg Licensed Battlefield Guide, and Vice President of the Center for Civil War Photography, Garry Adelman. With Barry Martin and Tom Danninger, Garry created the CD, The Gettysburg Park Commission Photos: Then & Now. He is instructing school teachers connected with the Civil War Preservation Trust on the Antietam National Battlefield. Here he shows where Abraham Lincoln stayed at the Stephen P. Grove House located in the trees in the left background, when Lincoln visited the Army of the Potomac on October 3, 1862. This view was taken facing southeast at approximately 11:00 AM on Tuesday, August 17, 2010.

In today’s Gettysburg Then and Now post, Garry Adelman, Barry Martin, and Tom Danninger show photographs taken in the area of The Wheatfield and Sickles and United States Avenues.

This map, from the Gettysburg Park Commission Photos Then and Now CD, shows us the locations for the Then and Now photographs. In today’s post we show photographs in the area of The Wheatfield and Sickles and United States Avenues.

The memorial to the 8th Pa Cavalry is at center. Also visible is the headquarters marker of Gen Winfield Scott Hancock. It, as well as all Union headquarters markers, was erected in 1913. This modern view of the previous photograph was taken in 2001.

View #7: “Hancock Ave, at intersection of Pleasonton Ave.” This view was taken in 1896.

14 years after the old view was recorded, the Pa. Memorial which is the largest monument at Gettysburg was erected in the little orchard at left. This modern view of the previous photograph was taken looking south in 2005.