“Unfit for Service” and “An Army on the March at Gettysburg?”

Photographer Alexander Gardner titled this stereo view “Unfit for Service – on the battlefield of Gettysburg. July 1863.” This view shows a dead mule by a limber. Although it is a well-known picture from Gettysburg, we are not aware of anyone being able to state specifically where it was taken and to what military unit the mule and limber belonged.

The Library of Congress and other photographic websites have performed a wonderful service in making available digital versions of some of America’s most historical photographs.

Earlier this week, the Gettysburg Daily editor was looking at the stereo views of the image by Alexander Gardner titled “Unfit for Service.” He thought he noticed some images in the background and darkened the image, revealing some details he was previously unaware of: A line of animals and artillery equipment standing on the road.

We’re not saying that we were the first people to darken the background and make this discovery. We (who are clueless about Gettysburg anyway) were certainly unaware of the existence of the detail in the background.

Your editor brought this image to the attention of individuals in the Gettysburg Licensed Battlefield Guide Room, and discovered that many of them had also not been aware of the equipment and animals in the background.

So after days of talking to death the details that they could find, we thought we would present the evidence to you in case you were also unaware of the background.

We will present at least one interpretation of the evidence in tomorrow’s post. Not all of the Licensed Battlefield Guides agree with everything about the presentation, and we can’t prove that the findings are true. However, we believe that the evidence points to a certain piece of ground on the Gettysburg Battlefield.

The guides of course freely gave their knowledge to attempting to interpret where the photograph was taken, and on what day. The hours that they spent figuring out different scenarios had nothing to do with the fact that things are very slow in the guide room this time of year and that they had nothing else to do.

We would like to thank the following guides and other individuals (alphabetical order) for their contributions to the photographs:

To add your input on the evidence, please click here to reveal our email address. 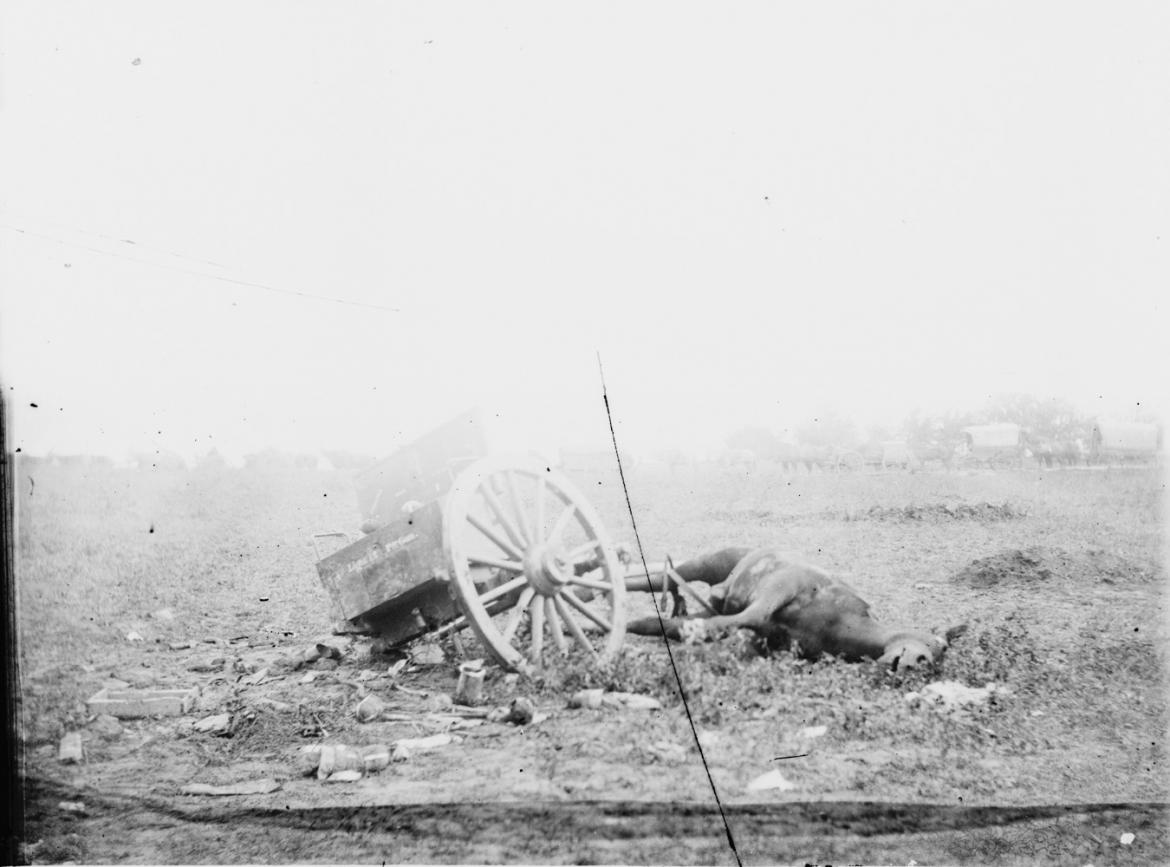 A view of one of the halves of the stereo shows good detail in the foreground with a “washed out” background. 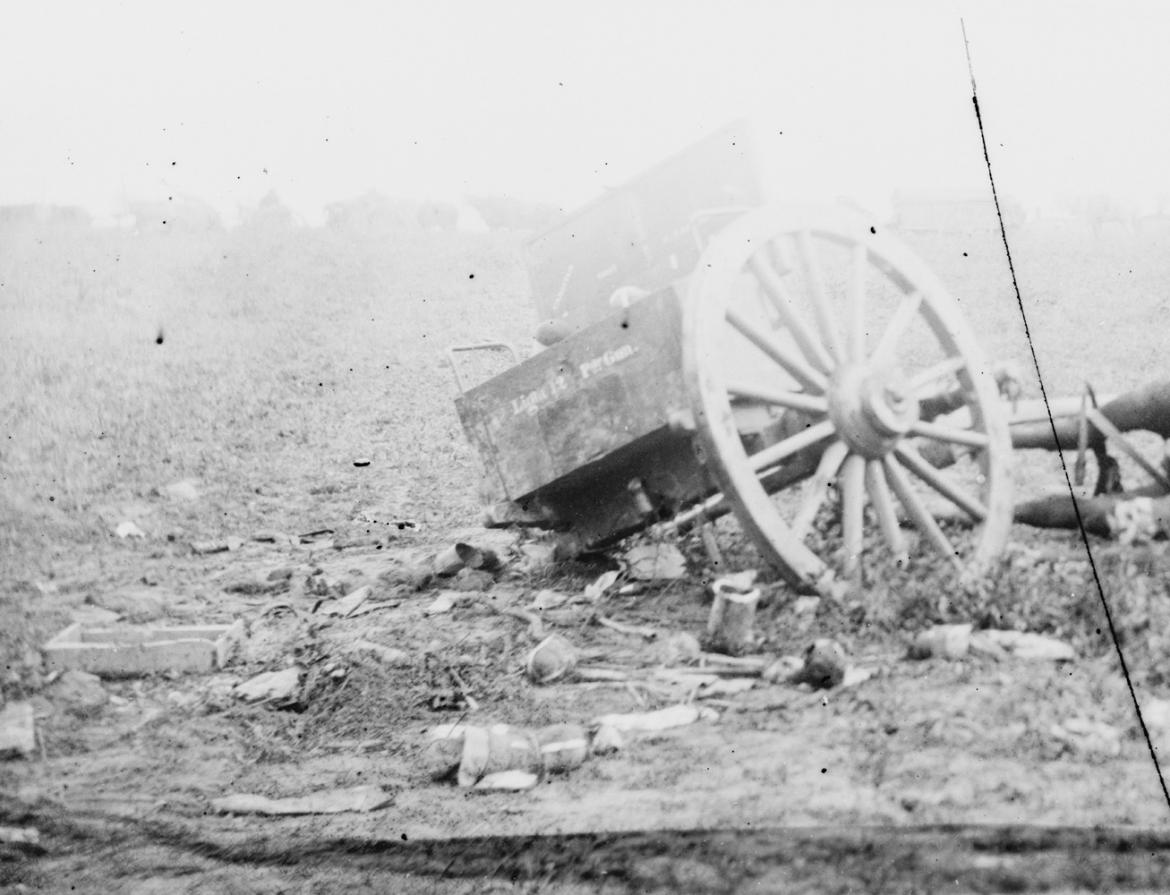 In the left foreground is a lot of debris, including a bucket, a tin cup, artillery shells, powder bags and a tray that held friction primers. Please click on this view to give you a larger image. 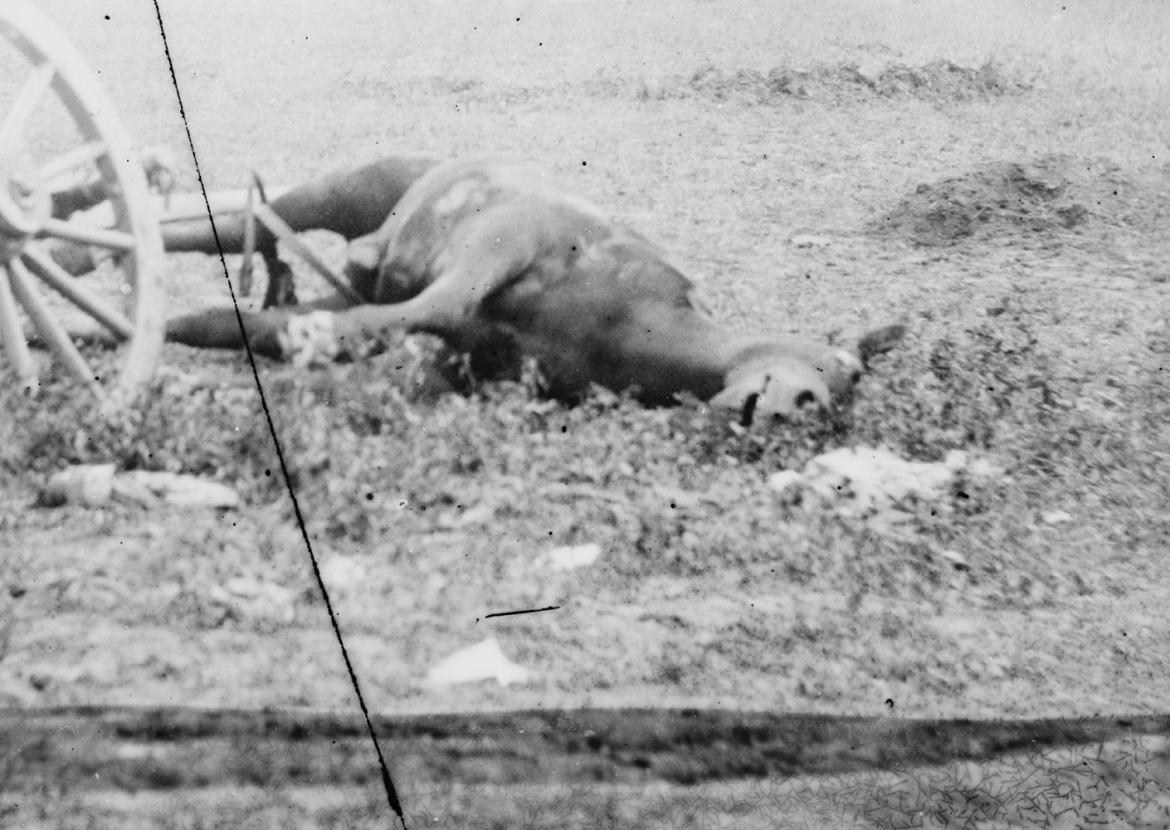 To the right of and behind the mule are what appear to be freshly dug graves. Tony Nicastro, our Licensed Battlefield Guide and former undertaker tells us the mule has been dead two to three days, and no more than four days.

When one darkens the photograph , one can see even better that this is a light 12 pounder gun (Napoleon). Inside the limber chest from left to right appear the words “canister” and “shot.”  Also other artillery ammunition is sticking out of the top of the chest. Again, please click on this view for a larger image.

In the right background under the large trees appear a couple of wagons with horses pulling them.

However, when we darken up the background, we get more detail. Are those large shade trees the kind that typically surround a house? Are the smaller trees on the left fruit trees that are part of an orchard?

First of all, we believe that we are looking at the equipment for an artillery battery standing/waiting on a road. On the right is a supply wagon. On the left is an ambulance.

The next vehicle to the left is a traveling forge. If you click on this image you will see what we believe is a wounded soldier sitting on the forge with a bandage around his head. His feet are on the left. His head with the white bandage is resting against the forge. There is a driver on the forge’s limber. The horses have saddles.

Here’s where things really get good. To left of the limber chest, look what happens when we darken the background. Those aren’t trees on the horizon.  They are animals pulling equipment. First on the right are two sets of horses. The lead set is behind a caisson. This shows the road is wide enough for equipment to be side by side. Then you have the caisson with a person sitting on the limber, and on the left are the horses pulling the caisson. It appears that there might be another caisson behind the caisson closest to the camera.

Here’s the whole background darkened.  Please click on this image, study the details, and give us your input. We might not have shown you all the details that interest us in finding out where it was taken. There might be many more important details that we missed.  However, is this the Army of the Potomac on the march at Gettysburg?