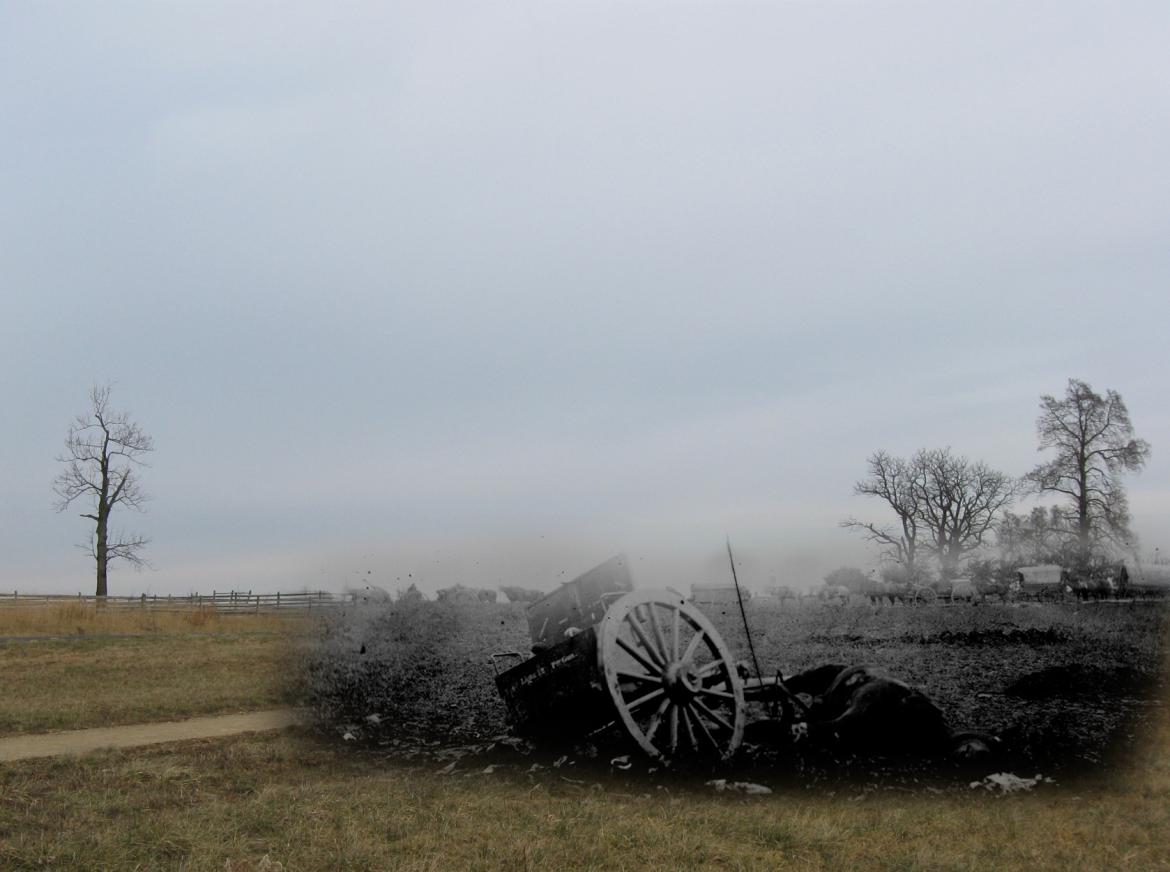 Yesterday we presented details from Alexander Gardner’s July, 1863 Gettysburg photograph, “Unfit for Service.” Today we present the area where we believe the photograph was taken. Gettysburg Licensed Battlefield Guide Rich Kohr presents his interpretation of to what unit the limber and mule might have belonged. 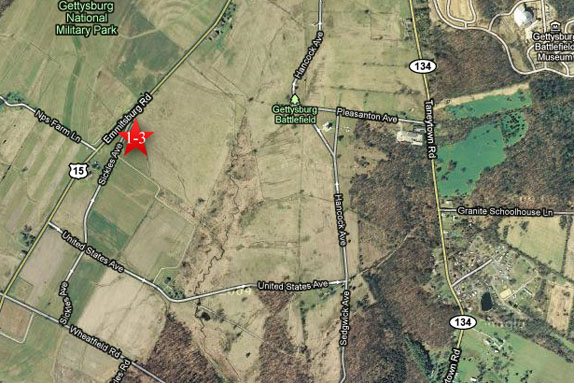 This map shows the locations for the videos we shot for this post. Videos #1-#3 were taken behind the position of Turnbull’s Battery, and southeast of the junction of Sickles Avenue and the Emmitsburg Road. This map was created facing north at approximately 6:15 PM on Thursday, December 30, 2010.

Gettysburg Licensed Battlefield Guide Rich Kohr is holding the photograph “Unfit for Service” in the area where we believe the photograph was taken. We no longer believe that it was taken from this angle (see our first photograph for this post) but we do believe it was taken in this area. The cars in the background are on the Emmitsburg Road. We have left the cars in this photograph to show how you can see the wheels of the cars on the right, but you begin to lose the wheels of the car on the left. In the left background is a monument and artillery pieces marking the location of Lieutenant John G. Turnbull’s Batteries F and K, Third United States Artillery. Just to the right of Rich is the marker to Carr’s Brigade of Humphreys’ Division. To the right of Carr’s marker is a car. To the right of that car is a monument to Company G, 1st United States Sharpshooters (Berdan’s) that were from Wisconsin. This view was taken facing northwest at approximately 4:15 PM on Wednesday, December 29, 2010.
In Video #1, Gettysburg Licensed Battlefield Guide Rich Kohr explains why he thinks the limber and the mule shown in the photograph belonged to Hugh Garden’s Palmetto (South Carolina) Artillery that was brought east of the Emmitsburg Road on July 3, 1863, to attempt to protect the right flank of Confederate infantry during Pickett’s Charge. This view was taken facing northwest to southwest to north to east to north at approximately 4:15 PM on Wednesday, December 29, 2010. 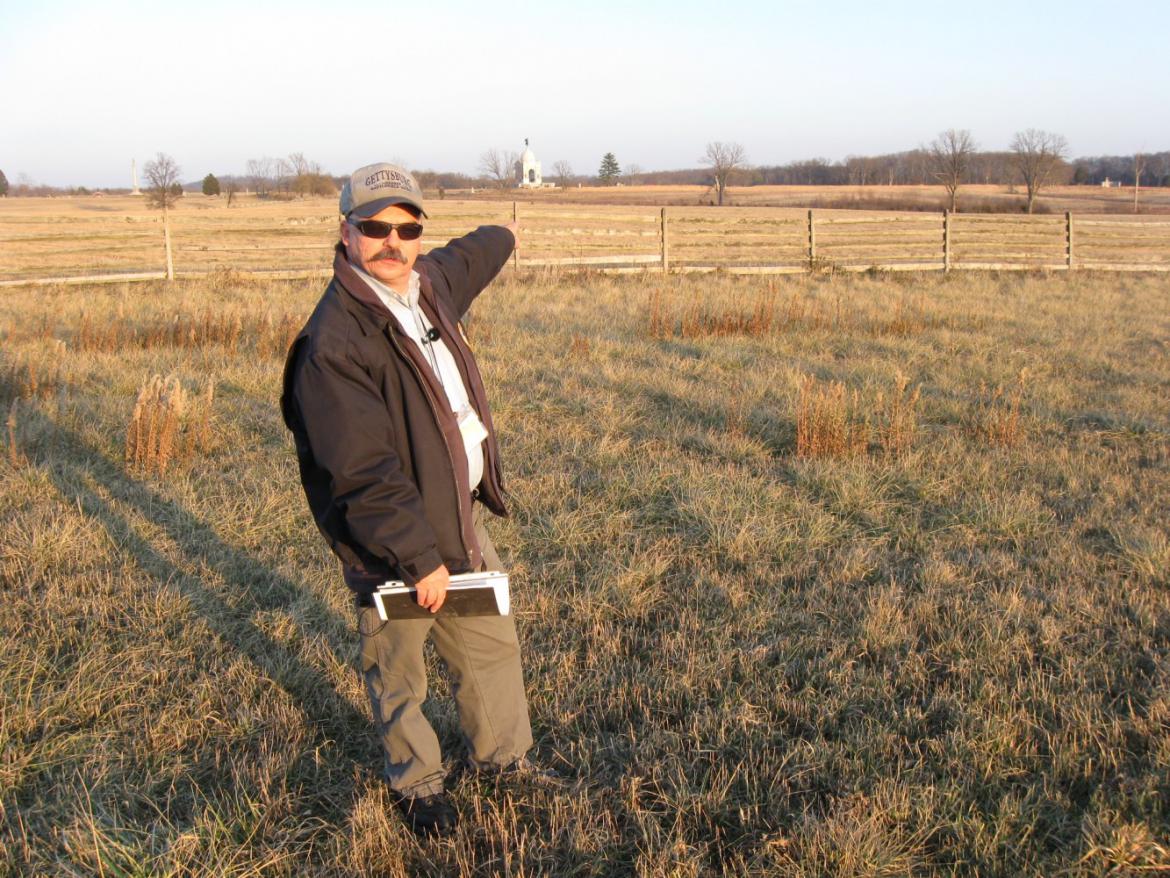 Gettysburg Licensed Battlefield Guide Rich Kohr points out the position of Freeman McGilvery’s artillery line on Cemetery Ridge. The Pennsylvania State Monument is the large structure sitting on Cemetery Ridge. In his official report of the Battle of Gettysburg, Captain Patrick Hart of the 15th New York artillery stated regarding his action on July 3, 1863: “immediately afterward he (the Confederates) brought a section to bear on me. I brought all the guns of my battery to bear on this section. The first gun that I fired exploded one of his limbers. Corporal Hammond with the next shot dismounted, I believe, one of his guns. Sergt. William Sheehy, I believe, followed with equal success. There was not a gun fired or a man to be seen at this section afterward, until, late in the evening, they sent down horses and took away one limber.” Captain Jabez Daniels of the 9th Michigan Battery, stated, “Another battery was then brought into the open field at a range of 700 yards. This battery was disabled before they could do me any damage.” From McGilvery’s line to the area where Rich is standing is approximately 700 yards. This view was facing east at approximately 4:25 PM on Wednesday, December 29, 2010. 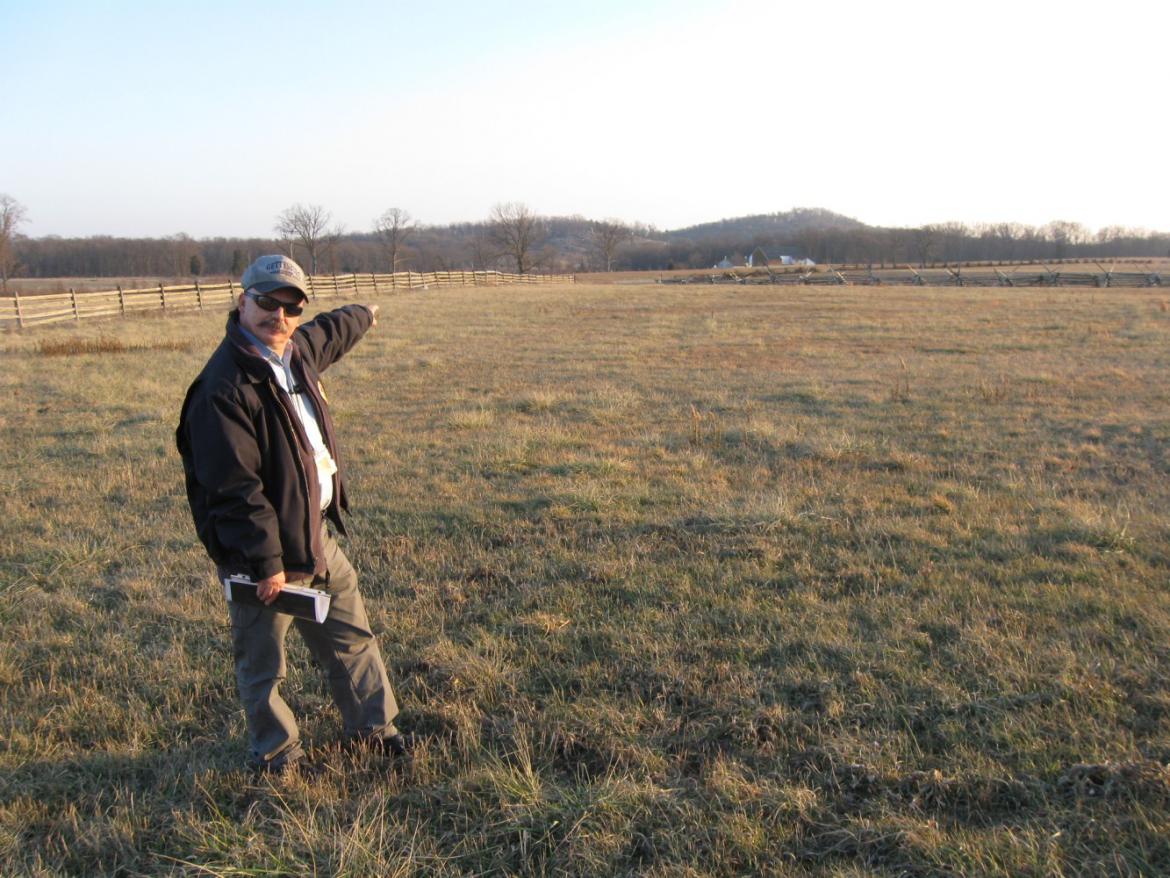 Licensed Battlefield Guide Rich Kohr is pointing to the Abraham Trostle Farm, which is directly below Big Round Top. Little Round Top is to the left of Big Round Top. This view was taken facing southeast at approximately 4:25 PM on Wednesday, December 29, 2010.
In video #2, Licensed Battlefield Guide Rich Kohr reminds us of the movements of photographer Alexander Gardner and his camera crew from July 5-7, 1863. This video was taken facing southeast to northwest at approximately 4:25 PM on Wednesday, December 29, 2010.

This is a better angle (an angle that we think matches Gardner’s angle) of the area where we believe the photograph was taken. In the right background are large trees near the site of the Peter Rogers House. Below the trees, and on the far right is the statue to Brigadier General Andrew H. Humphreys. To that statue’s left is the monument to the 11th Massachusetts Regiment. The stop sign to the left of the car (on the Emmitsburg Road) stops traffic from Sickles Avenue from entering the Emmitsburg Road. To the left of the stop sign is the marker for Carr’s Brigade. The next marker to the left is to Andrew Humphreys’ Second Division of the Third Corps. To the left of Humphrey’s Division marker are artillery pieces and a marker for John G. Turnbull’s Battery F and K, Third United States Artillery. The Emmitsburg Road is just in front of (west of) the cannon. Sickles Avenue is behind the cannon and in front of the Humphreys Division marker. The dirt path in the background is a horse trail. The wooden post and rail fence in the left background is west of the Emmitsburg Road. We combined this image with the Gardner photograph to present the first view on today’s post. This view was taken facing mostly north at approximately 10:35 AM on Thursday, December 30, 2010.
In video #3, Rich Kohr explains some of the evidence that leads us to believe that the photograph was taken in this area. This view was taken facing northwest to west to northwest at approximately 4:30 PM on Wednesday, December 29, 2010. 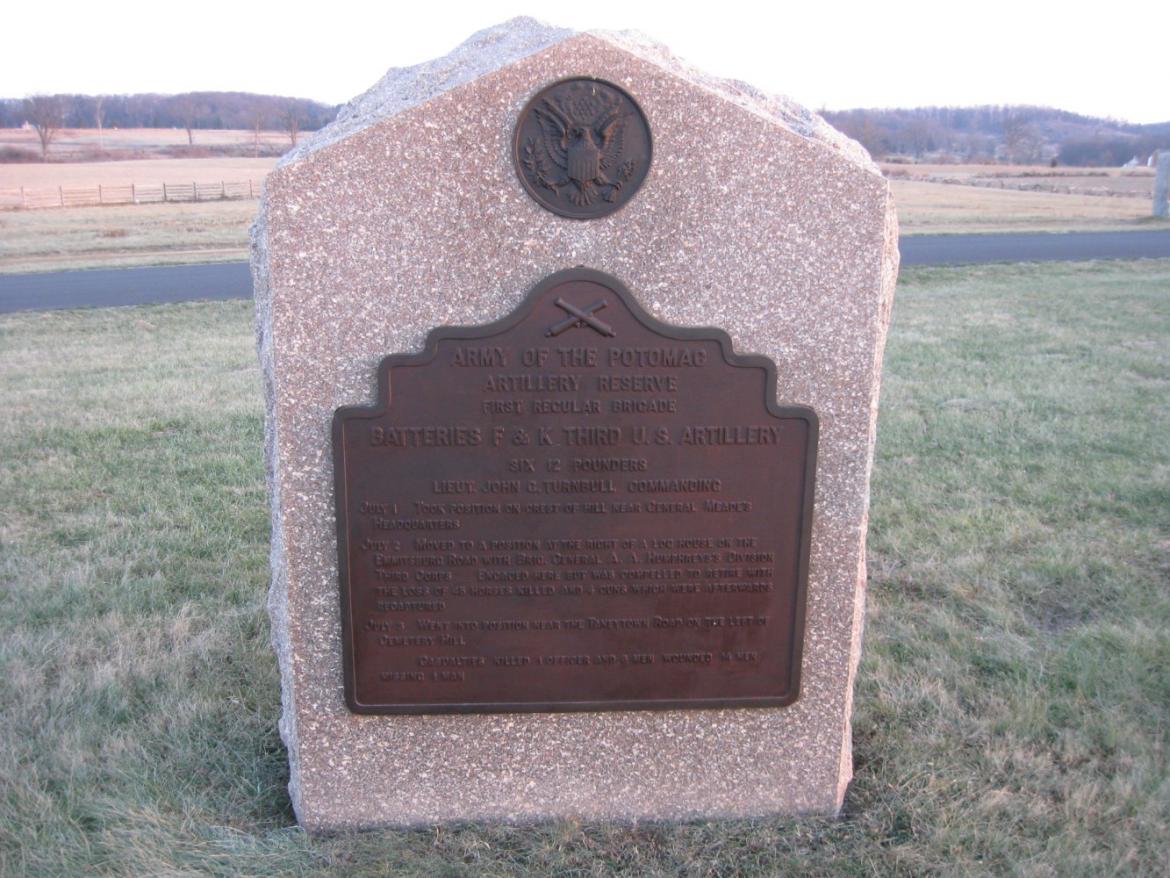 While Rich believes that the mule and other evidence points to this being a Confederate battery, it should also be kept in mind that we are behind Turnbull’s position on July 2, 1863. Turnbull lost four guns and 45 horses were killed, but the accounts state that he lost his guns as he attempted to retreat across Plum Run, which is the low ground between the position of his marker and Cemetery Ridge, where the fields meet the tree line in the background. This view was taken facing east at approximately 4:45 PM on Wednesday, December 29, 2010.

Photographer Alexander Gardner titled this stereo view “Unfit for Service – on the battlefield of Gettysburg. July 1863.” This stereo view from the Library of Congress possesses some very interesting details…

…especially after we manipulated the midtones of the image.