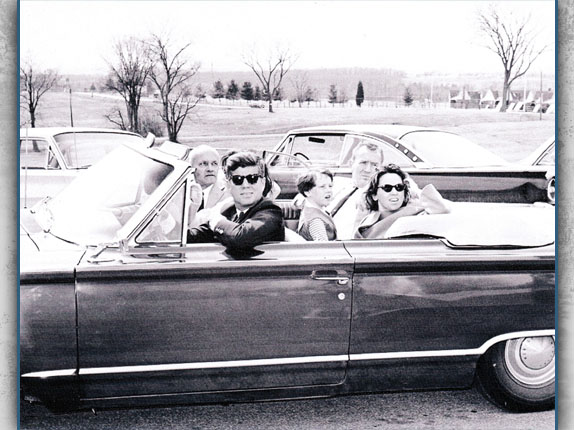 In our sixth and last series on President John F. Kennedy’s visit to Gettysburg, the Kennedy party reached Oak Hill and paused to look at the Eternal Light Peace Memorial (Peace Light). In the front seat from left to right are Caroline Kennedy (head visible behind the front windshield), Colonel Jacob Sheads, Mrs. Jacqueline Kennedy (hand and hair visible behind the President), President John F. Kennedy, Sally Fay, Under Secretary of the Navy Paul Fay Jr., and Anita Fay. Look at the two trees in the background above the windshield. Between them is visible the monument to the 9th New York Cavalry Regiment on Buford Avenue. The Peace Light Inn is on the right. This view was taken facing southwest at approximately 1:20 PM on Sunday, March 31, 1963.

Tomorrow is the 46th anniversary of President John F. Kennedy’s visit to Gettysburg. On March 31, 1963, President Kennedy with some friends and members of his family drove from a church service at Camp David, Maryland to tour the Gettysburg Battlefield. Their guide was Jacob Melchior Sheads, a longtime Gettysburg High School History Teacher and seasonal historian with the National Park Service. Licensed Battlefield Guide Richard Goedkoop follows what we know of the route that the Kennedy party took around the battlefield.

In the first part of this series, Richard Goedkoop covered how the trip was planned and where President Kennedy picked up Colonel Sheads. In our second post, we discussed the Kennedy party in the area of the Angle/High Water Mark. In the third part, the Kennedy party visited Little Round Top. In the fourth post the tour went by the Wheatfield/Stony Hill/Loop area. In the fifth post, the Kennedy party drove north along Seminary Ridge and got out of the vehicles at the North Carolina Monument.

In today’s post the Kennedy party drives by the Eternal Light Peace Memorial and leaves the area by helicopter. 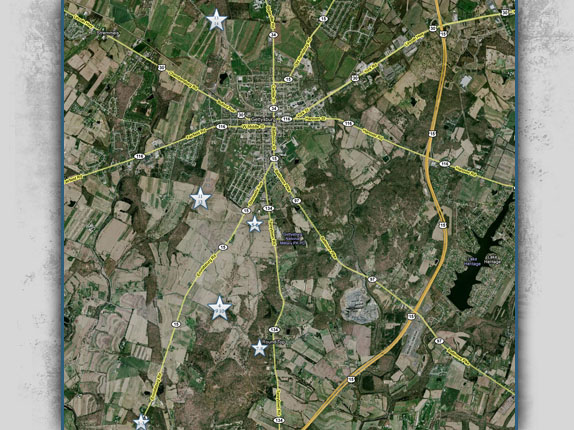 This map shows the locations of the videos that we have shot during the Kennedy segments. Videos 1-3 were taken at Edgewood Bowling Lanes on the Emmitsburg Road, which is off the map. Videos 4, 9 and 10 were taken at the Stony Hill or “Loop” area. Videos 5-6 were taken at the High Water Mark/Angle Area. Videos 7-8 were taken on Little Round Top. Videos 11 and 12 were taken at the North Carolina Monument. Videos 13-14 were taken at the Eternal Light Peace Memorial. This map was created facing north at approximately 6:45 PM on Thursday, March 29, 2009.
Get the Flash Player to see this player.
In Video #13 (Videos 1-12 were part of our previous Kennedy Visit posts), Gettysburg Licensed Battlefield Guide Richard Goedkoop explains a little bit of the Kennedy visit, and some history of the dedication of the Peace Light. This view was taken mostly facing northwest at approximately 4:30 PM on Saturday, February 14, 2009. 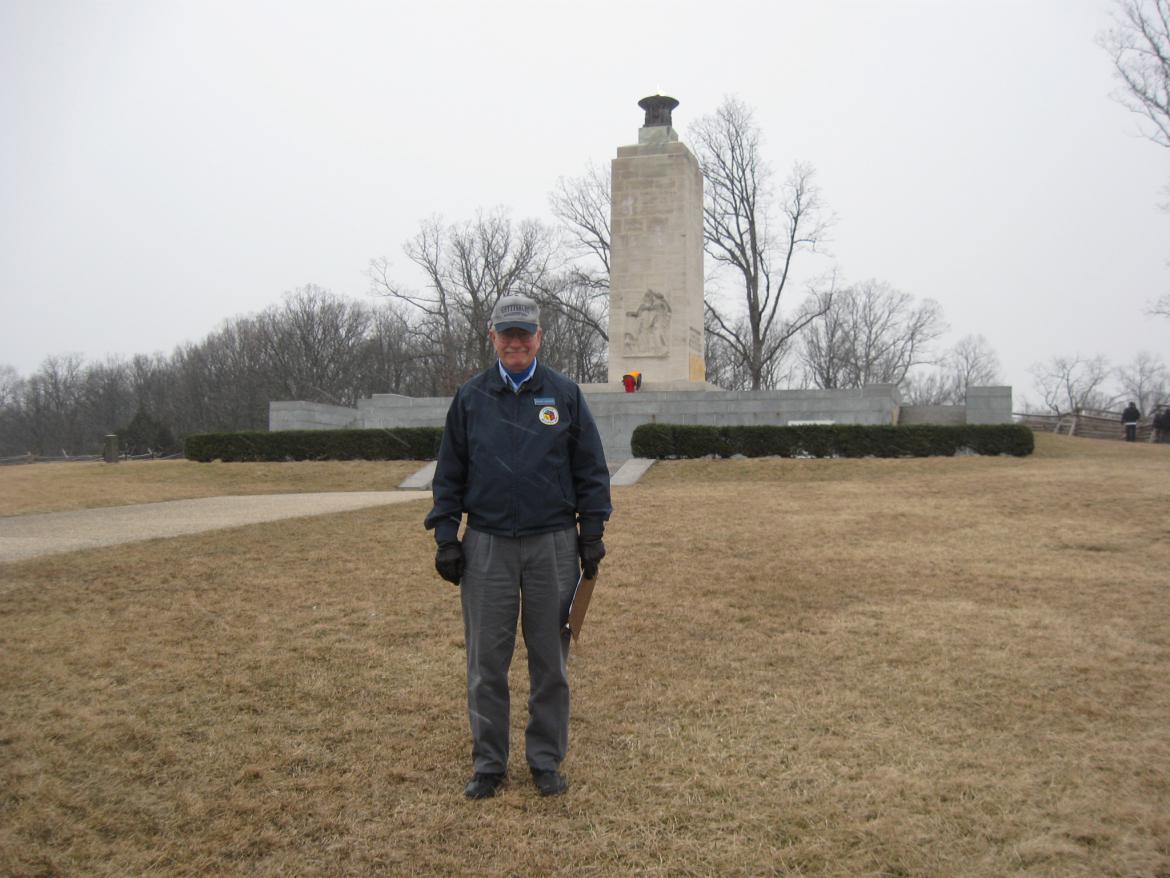 Gettsyburg Licensed Battlefield Guide Richard Goedkoop has been the host for our Kennedy series. The Peace Light at Gettysburg was said by Jack Valenti (1921-2007), who was an aide to President Lyndon B. Johnson, to be the source for the eternal flame on President Kennedy’s grave at Arlington National Cemetery. Valenti who was later president of the Motion Picture Assocation of America, related the story when he toured the Gettysburg battlefield, circa 1987, with Licensed Battlefield Guide Bob Mullen. Valenti stated that President Johnson ordered him to take care of the Kennedy funeral arrangements. Mrs. Kennedy requested that there be an eternal flame on the grave at Arlington. There was confusion among the military about what she was requesting. Valenti went back to Mrs. Kennedy who told Valenti that they had toured the field of Gettysburg, and saw the flame on the Eternal Light Peace Memorial. This is what she wanted on President Kennedy’s grave. This view was taken facing northwest at approximately 4:30 PM on Saturday, February 14, 2009.
Get the Flash Player to see this player.
In video #14, Richard Goedkoop relates the Jack Valenti version of the Peace Light at Gettsyburg being the source for Kennedy’s eternal flame at Arlington National Cemetery. This view was taken facing mostly northwest at approximately 4:30 PM on Saturday, February 14, 2009. 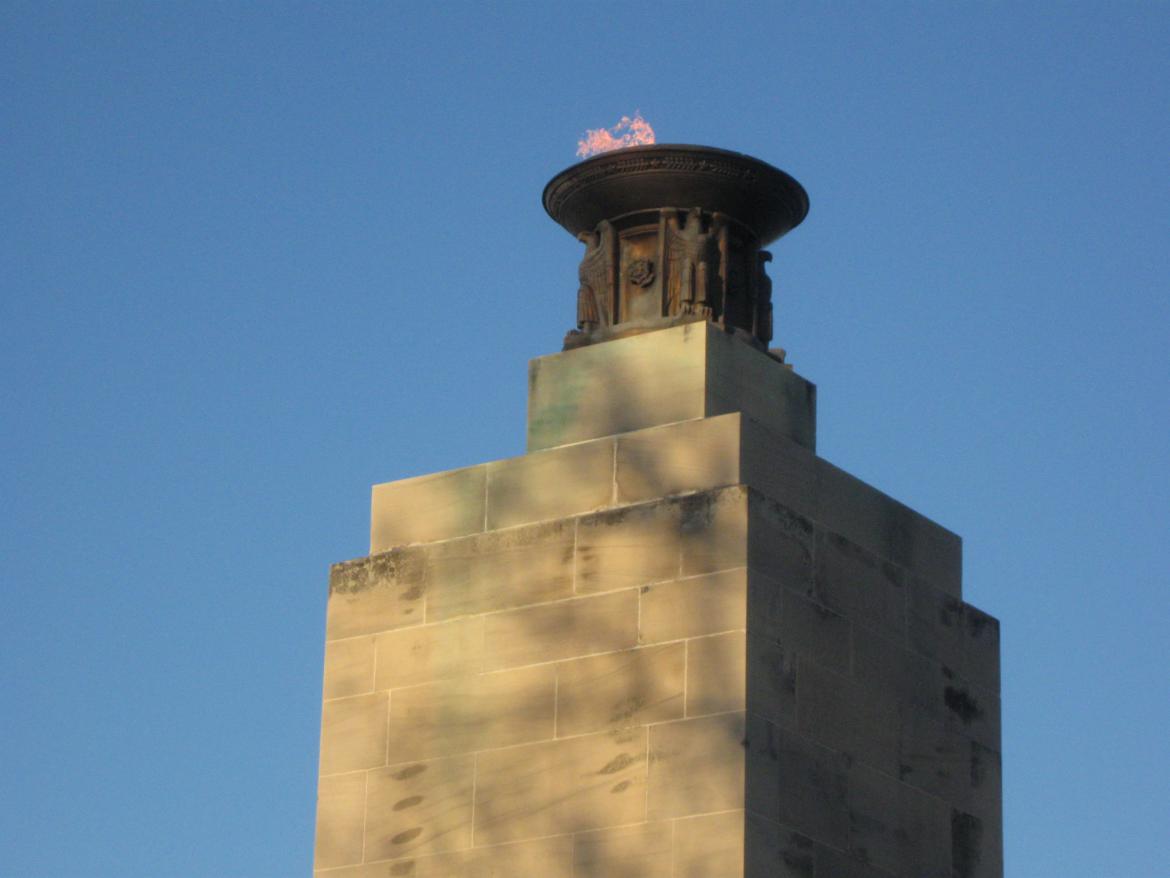 Jack Valenti told Licensed Battlefield Guide Bob Mullen, that “a few telephone calls were made to the National Military Park at Gettysburg for construction details of the Eternal Peace Light Monument.” This view was taken facing southwest at approximately 8:00 AM on Thursday, December 25, 2008. 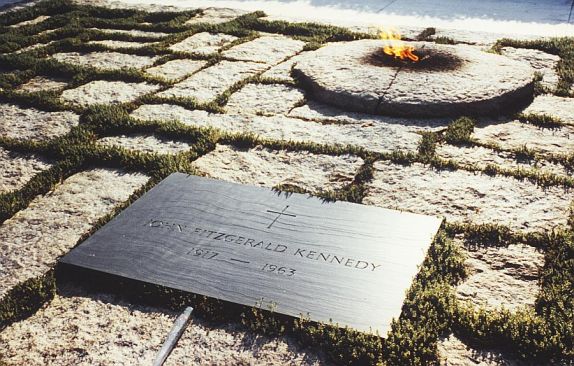 The Eternal Flame on President Kennedy’s grave at Arlington National Cemetery. Valenti stated “after much scrambling” the flame on Kennedy’s grave at Arlington was lit on time. Other sources state that Mrs. Kennedy got the idea for the Eternal Flame from a 1961 visit to the Arc de Triumphe in Paris. So is the Paris vist the inspiration of the eternal flame idea, or was that idea reinforced by her visit to Gettysburg eight months before her husband was assassinated? If Valenti’s story is correct, why did she relate to him that she wanted an eternal flame such as she saw at Gettysburg, not Paris? 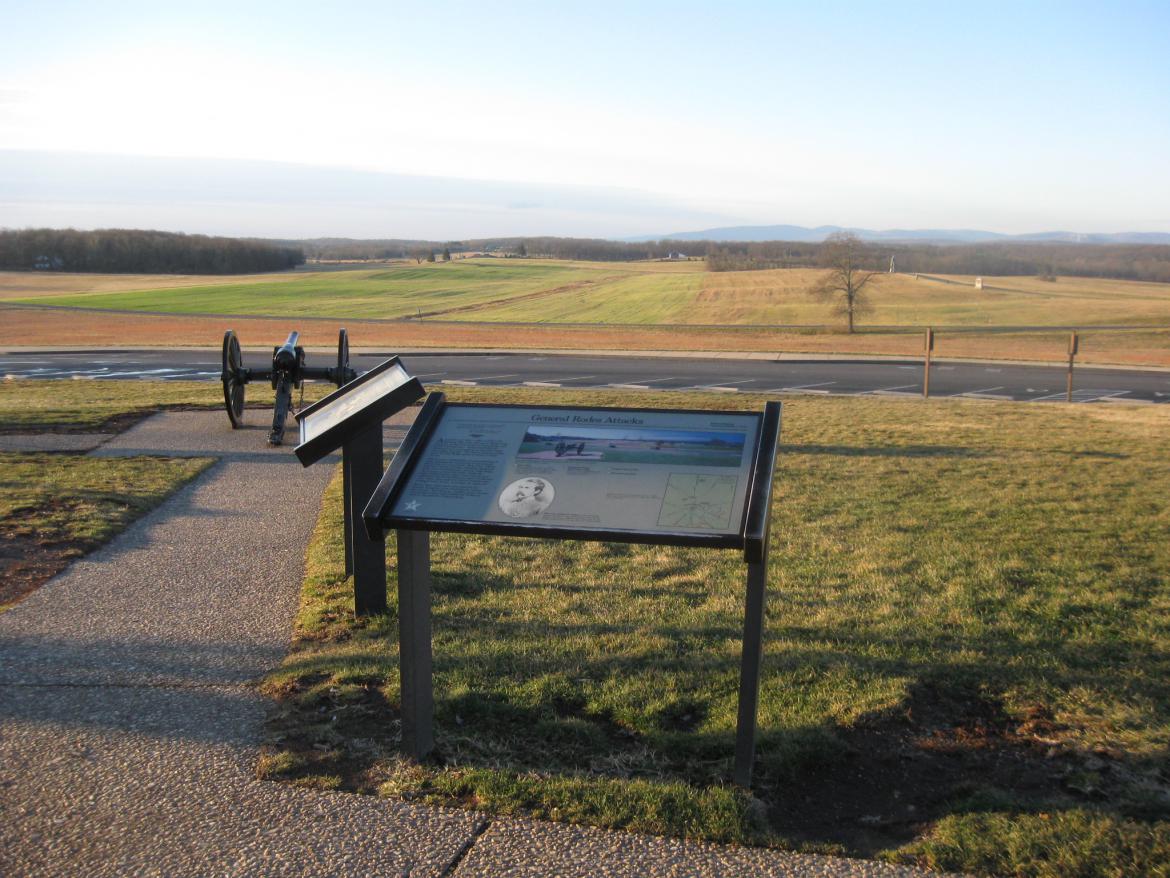 The Kennedy party then received permission to turn around and drive west on North Confederate Avenue to the Gettysburg airport on US 30. This view was taken facing south at approximately 8:00 AM on Thursday, December 25, 2008. 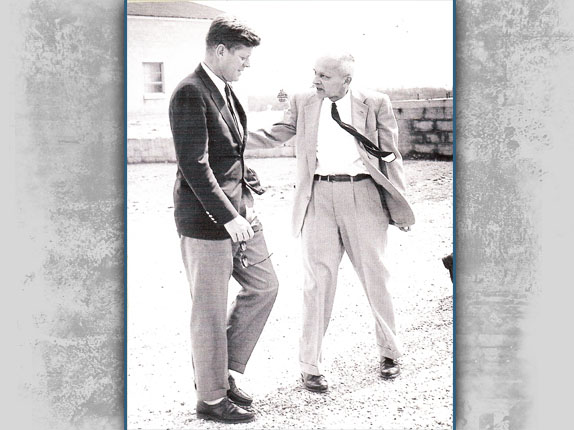 By 1:26 PM the Kennedy party was boarding a helicopter for the 10 minute ride back to Camp David. Colonel Sheads is saying goodbye to the President as the helicopter blade blows his tie. Sheads remembered President and Mrs. Kennedy as “very friendly and polite,” and President Kennedy in particular as “a wonderful person.” This view was taken at approximately 1:25 PM on Sunday, March 31, 1963. 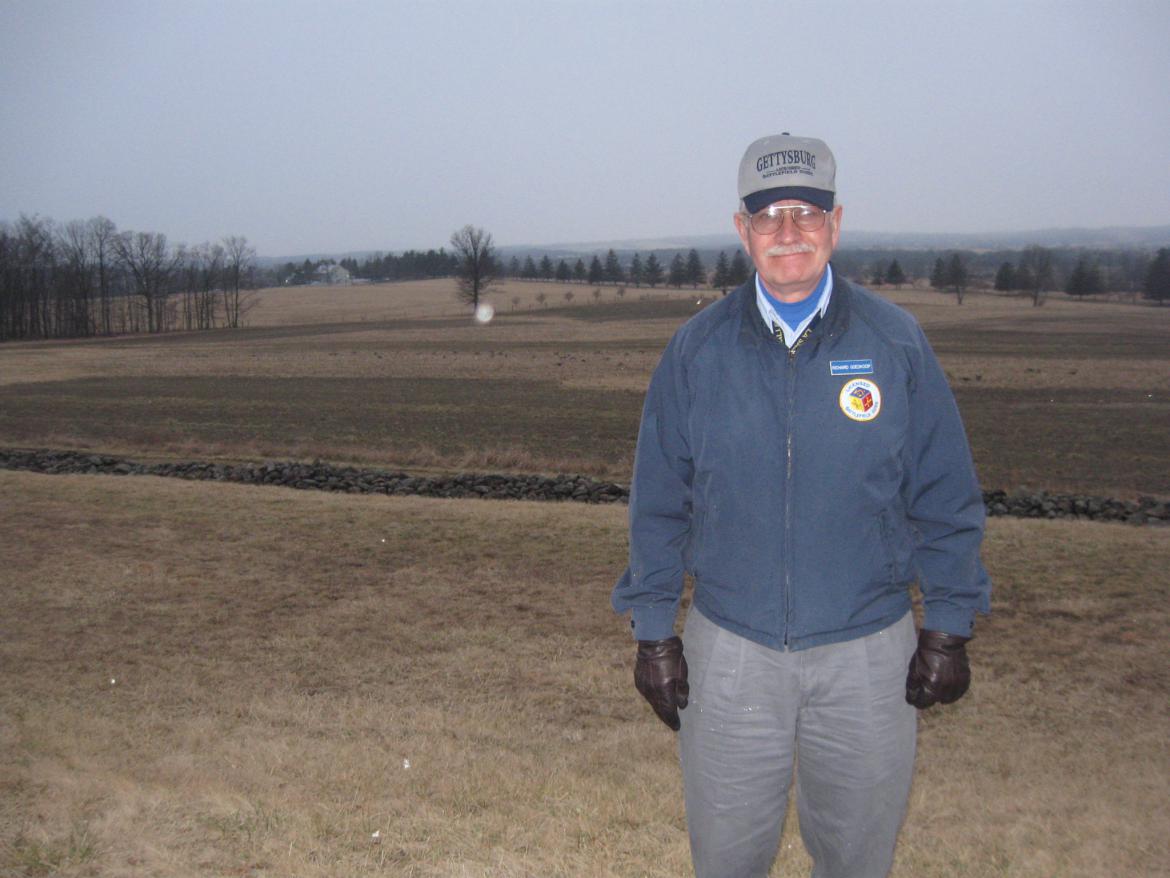 As you can tell, it was starting to snow when we took this photograph of Richard Goedkoop with the Eisenhower Farm in the background. We were wondering why Kennedy hadn’t stopped by the Eisenhower Farm to pay his respects while he was in town. The Gettysburg Times for April 1, 1963, states the following: “The Kennedys also got a quick look at the Eisenhower farm, although shrubbery concealed a great part of the area.” The Eisenhowers were in Palm Springs, California, that weekend. Paul Fay wrote that Kennedy “was always amazed and intrigued by the life of …Eisenhower.” Kennedy had the helicopter fly over President Eisenhower’s Farm as he was flying back to Camp David that Sunday afternoon. This view was taken facing southwest at approximately 5:00 PM on Saturday, February 14, 2009. 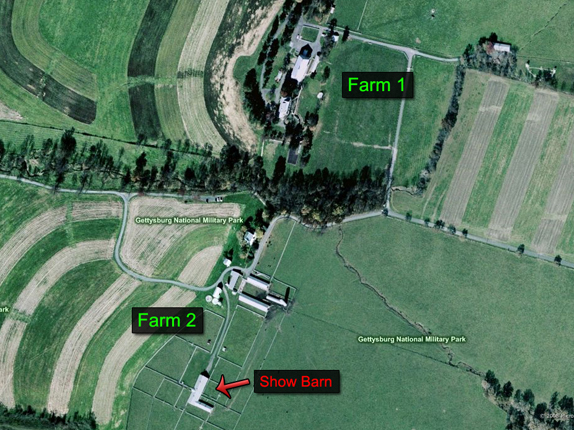 An aerial view of the Eisenhower Farm. Paul Fay, in his book The Pleasure of His Company, tells the following story as the President Kennedy’s helicopter flew over the farm: “Looking down at the beautiful farmhouse, the spacious metal barns, quantities of farm equipment, the freshly painted fence and an assortment of thoroughbred stock, Jack said with a trace of wonder plus curiosity, ‘There doesn’t seem to be too strong a basis for a military pay raise if Ike could accumulate all this spread starting as a second looey.’ He didn’t begrudge Ike any of his material possessions. In fact, he respected Ike, but he was fascinated by the demands of a military career.” See our post on the Eisenhower Show Barn on November 3, 2008. This map was created at approximately 6:30 PM on Monday, November 3, 2008. 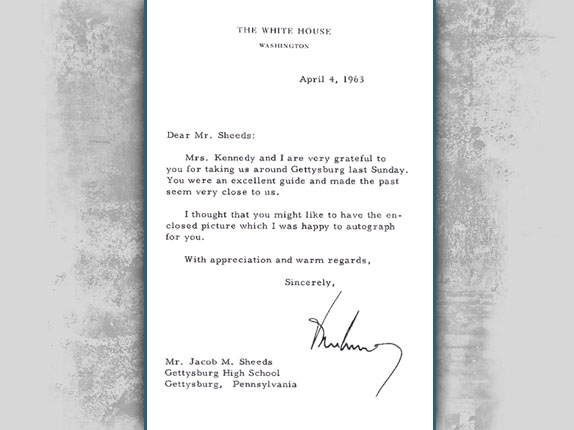 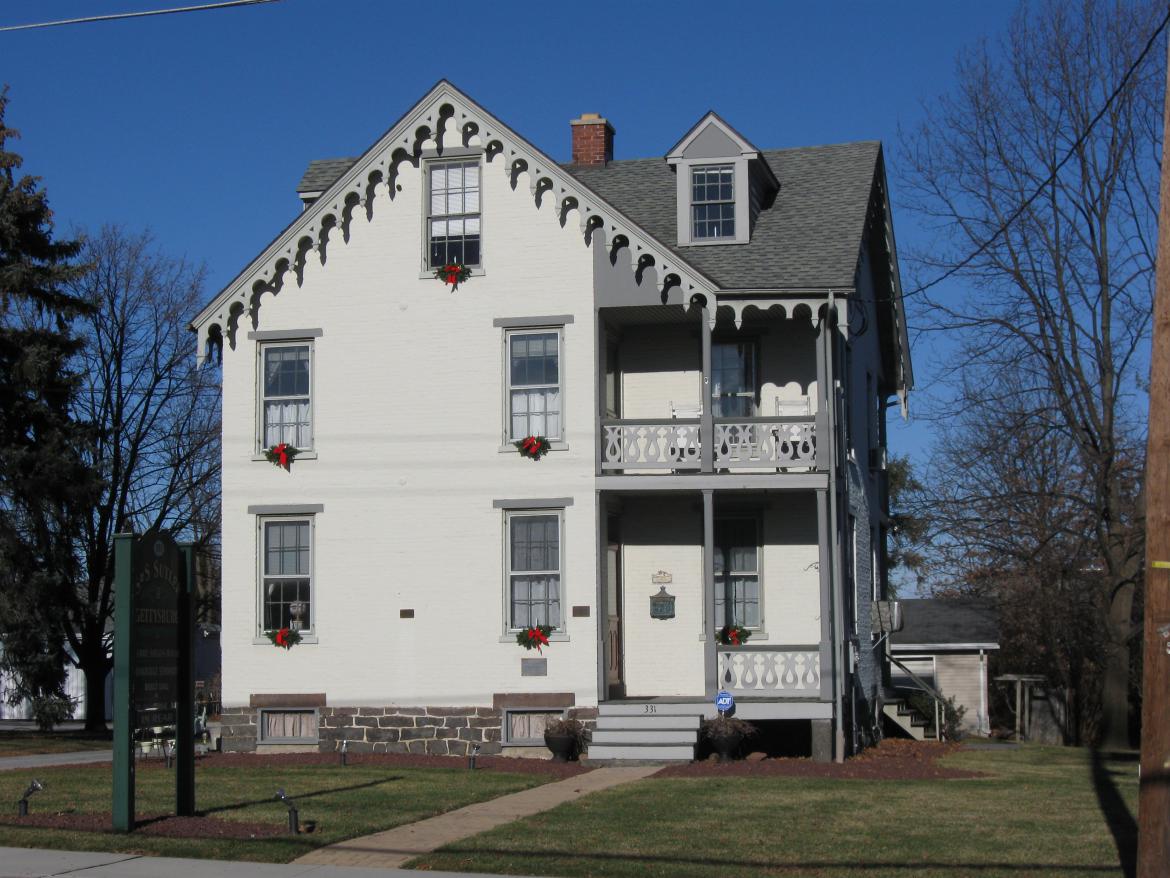 Most of the black and white photographs of our series on the Kennedy visit were graciously supplied to us by one of Jacob Sheads’ sons, Tim Sheads. Tim and his wife Debbie own the Carrie Sheads House on Buford Avenue (the old Chambersburg Pike). 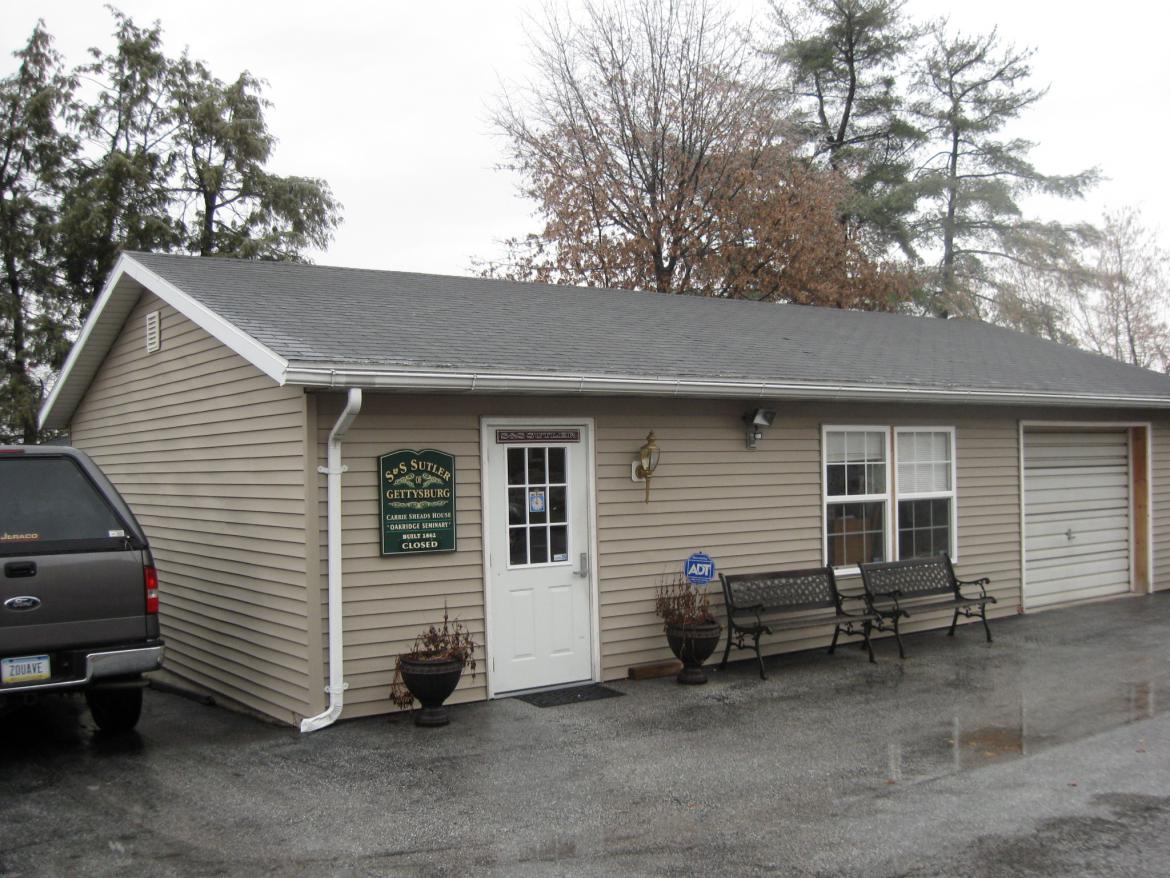 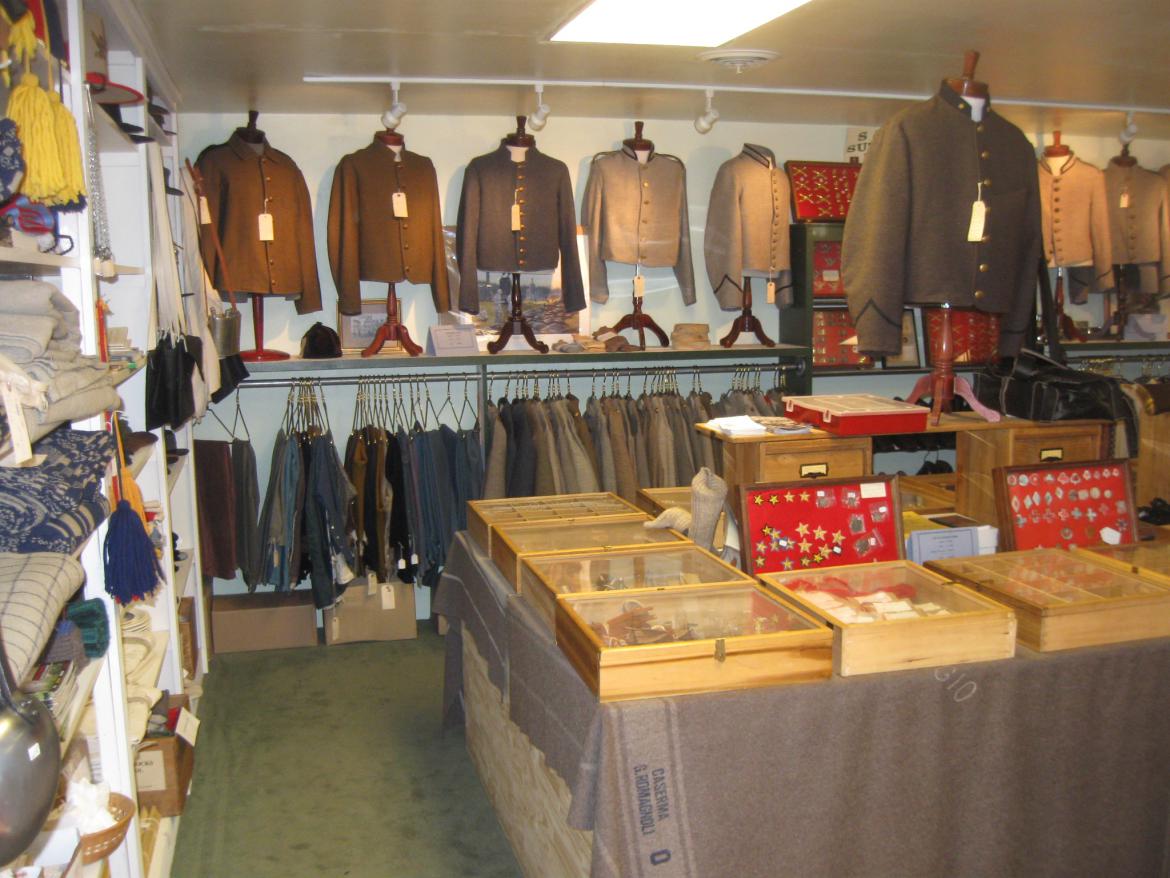 S & S Sutler of Gettysburg is filled with items for reenactors and others who are interested in Civil War history. This photograph was taken facing northeast at approximately 2:00 PM on Sunday, February 15, 2009.

See our previous posts on the Carrie Sheads House: