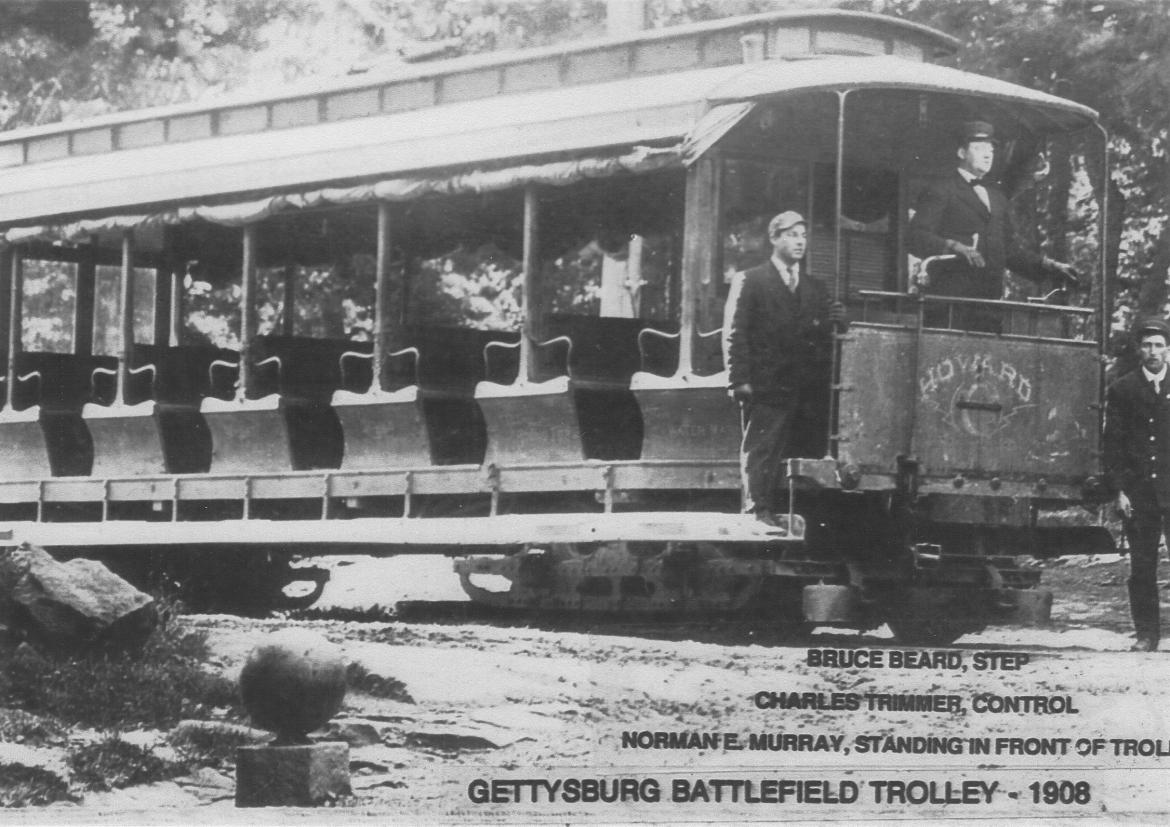 The Gettysburg Electric Trolley operated in the town and on the battlefield from 1893 to 1916. There were seven trolley cars, each named for a corps commander in the United States Army. This car is the General Howard at the north end of Little Round Top in 1908. This photograph is courtesy of the National Park Service.

Today we are beginning a series on the Gettysburg Electric Trolley, which existed from 1893 to 1916. Gettysburg Licensed Battlefield Guide Rich Kohr will take us on a tour of the trolley area. The purpose is to follow the trolley around the field, show photographs of what the area looked like at the time the trolley was operating, and show the remaining traces of the trolley.

The trolley was one of the first non-horse powered mass transportation systems on the Gettysburg Battlefield. Its supporters promised that the damage to the battlefield’s resources would be minimal, but others, including some veterans groups, disagreed. The Battlefield Memorial Association was almost powerless to stop the trolley from operating on the battlefield. One of the primary reasons that Gettysburg National Military Park was established was to create a government agency that could have more power to protect the battlefield from entities like the trolley company. Also, in 1896, the United States Supreme Court established the right of eminent domain based on the United States government’s attempt to forcibly take over the trolley. The landmark court case established the right of the United States to condemn land for the preservation of areas of historic significance. 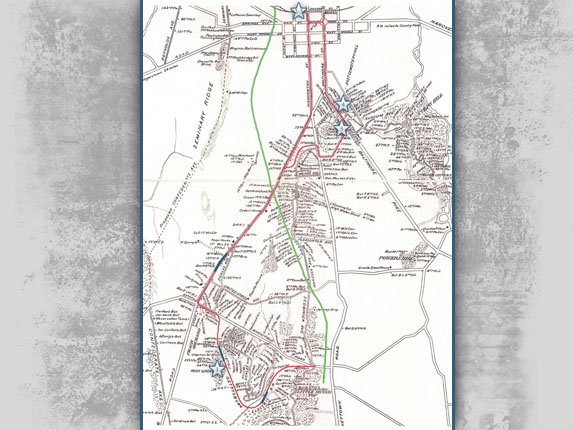 This map shows the route of the trolley. The red line is the trolley route. The green line is the route of the Gettysburg/Harrisburg/Reading Railroad. For some time, the trolley used the Gettysburg/Harrisburg/Reading Railroad line from the Emmitsburg Road to Little Round Top to help establish a circular route on the battlefield. The blue sections are where the trolley had double or passing tracks. The white stars are the locations where we filmed videos, which we have numbered. Click on this image to make it larger. This map was created at approximately 8:00 PM on Tuesday, January 20, 2009. 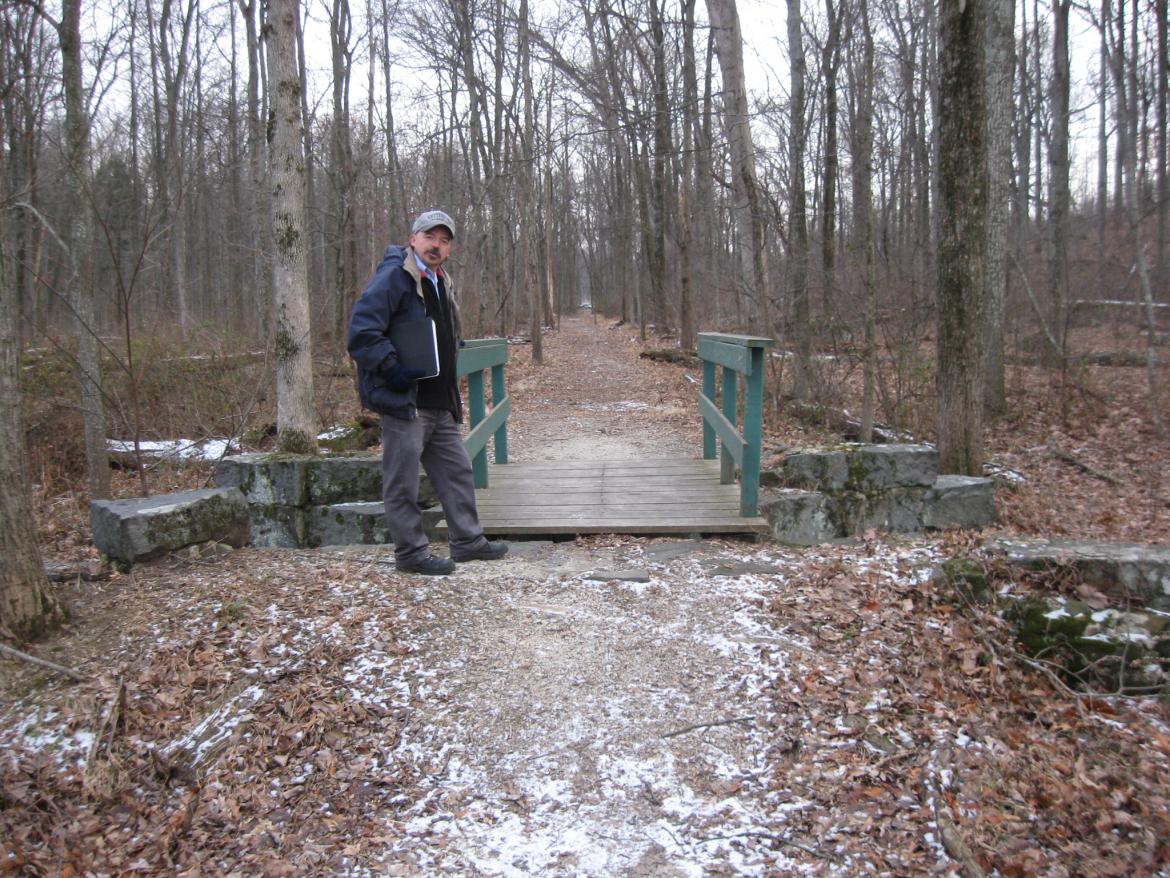 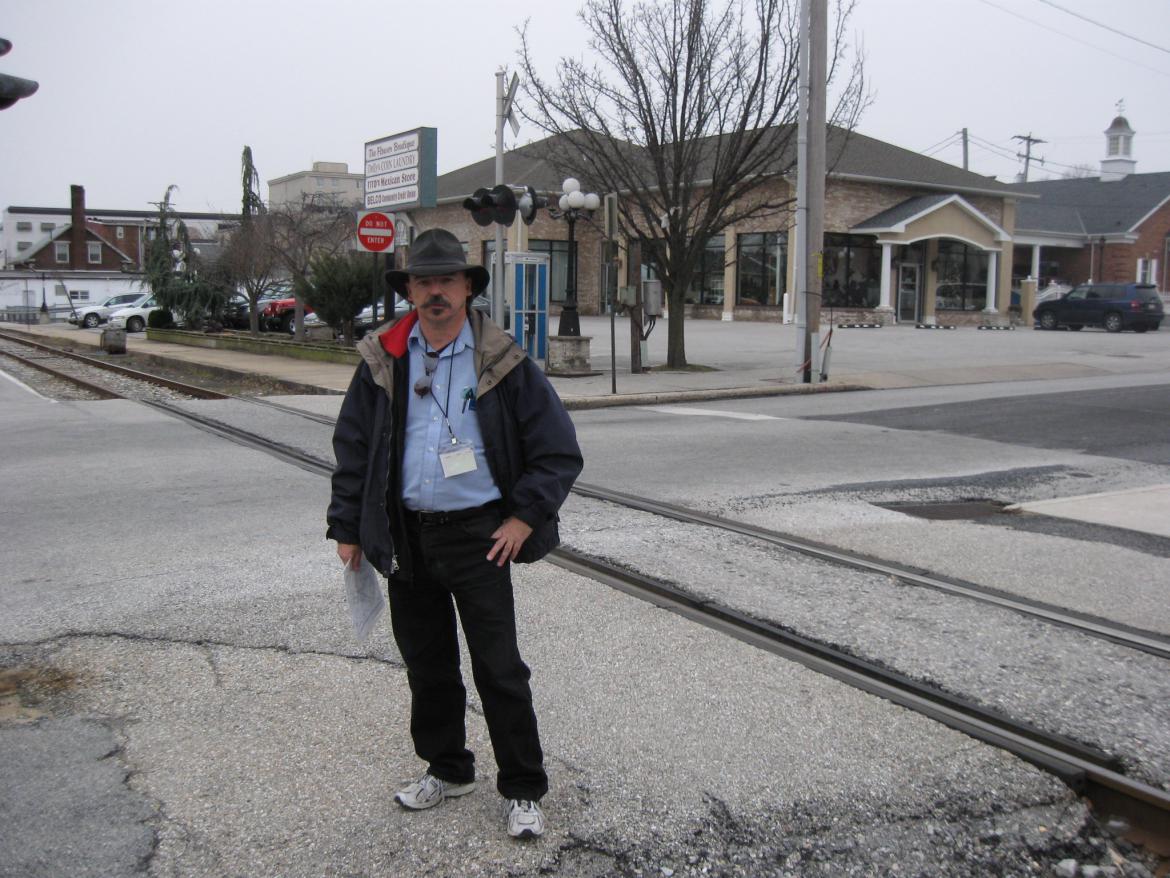 Rich will start tracing the trolley route at the corner of Washington Street and Railroad Street. The location of the Power Plant/Electric Trolley Barn was behind Rich, where a flower shop and laundry are now located. This view was taken facing southeast at approximately 10:30 AM on Friday, January 2, 2009. 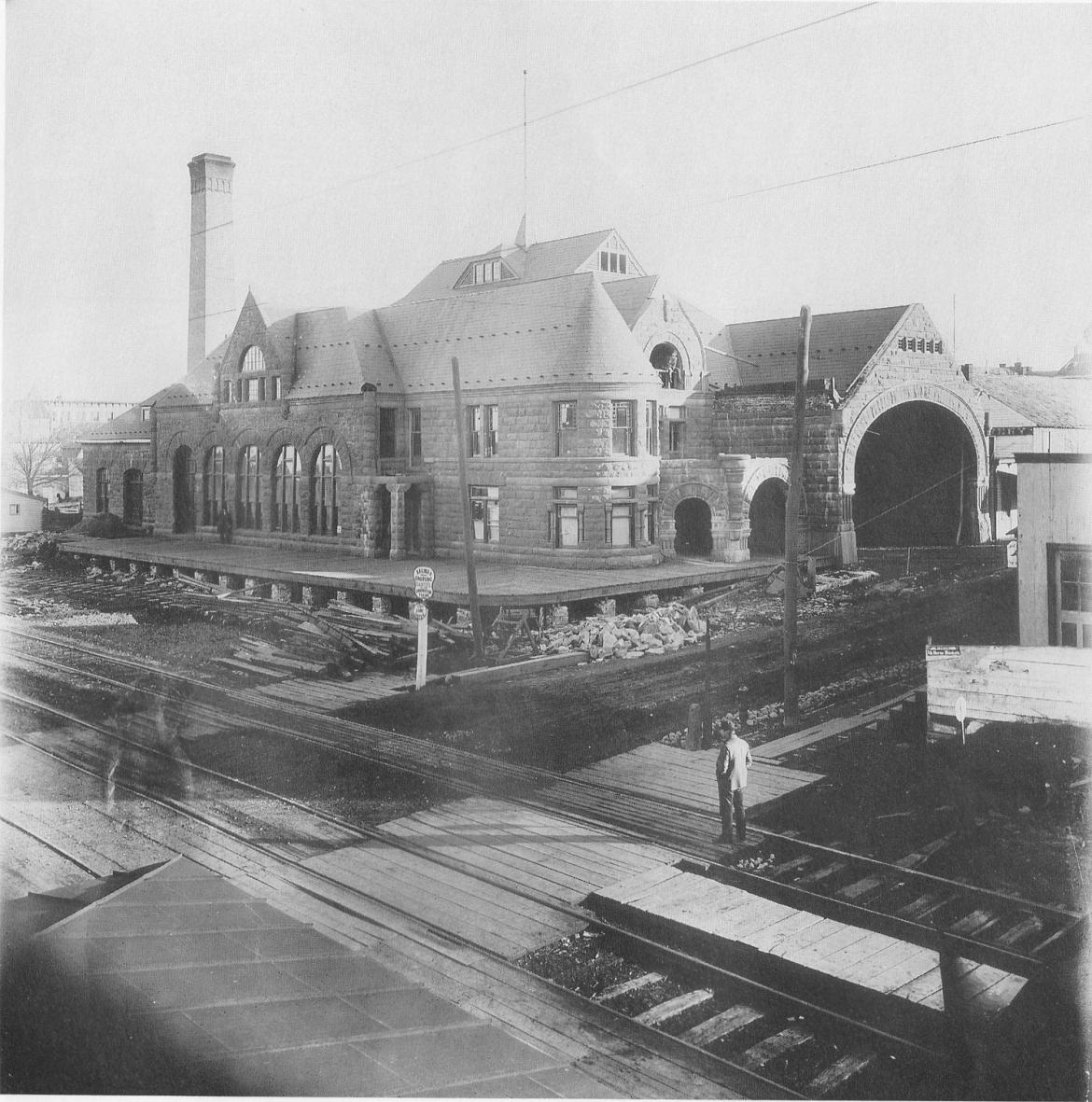 Electricity and the Gettysburg Electric Trolley arrived in Gettysburg in 1893. The electric powerhouse, shown here in its unfinished state, also served as the trolley barn. The large entrance on the right is where the trolleys entered and exited the structure. This building was demolished in 1965. This photograph is courtesy of the National Park Service. This view was taken facing southeast in 1893.
In Video #2, Rich starts us off at the intersection of North Washington and Railroad Streets, across from the powerhouse and trolley barn location. We don’t want to confuse you over dates that the trolley existed. The trolley ceases operation in 1916. The trolley tracks were removed in 1917. This view was taken facing southeast to a couple of other directions at approximately 10:30 AM on Friday, January 2, 2009.
In Video #3, Rich explains the original trolley route, and how the Supreme Court decided that the U.S. Government could use eminent domain to condemn land to protect historic sites. This view was taken facing southeast at approximately 10:30 AM on Friday, January 2, 2009. 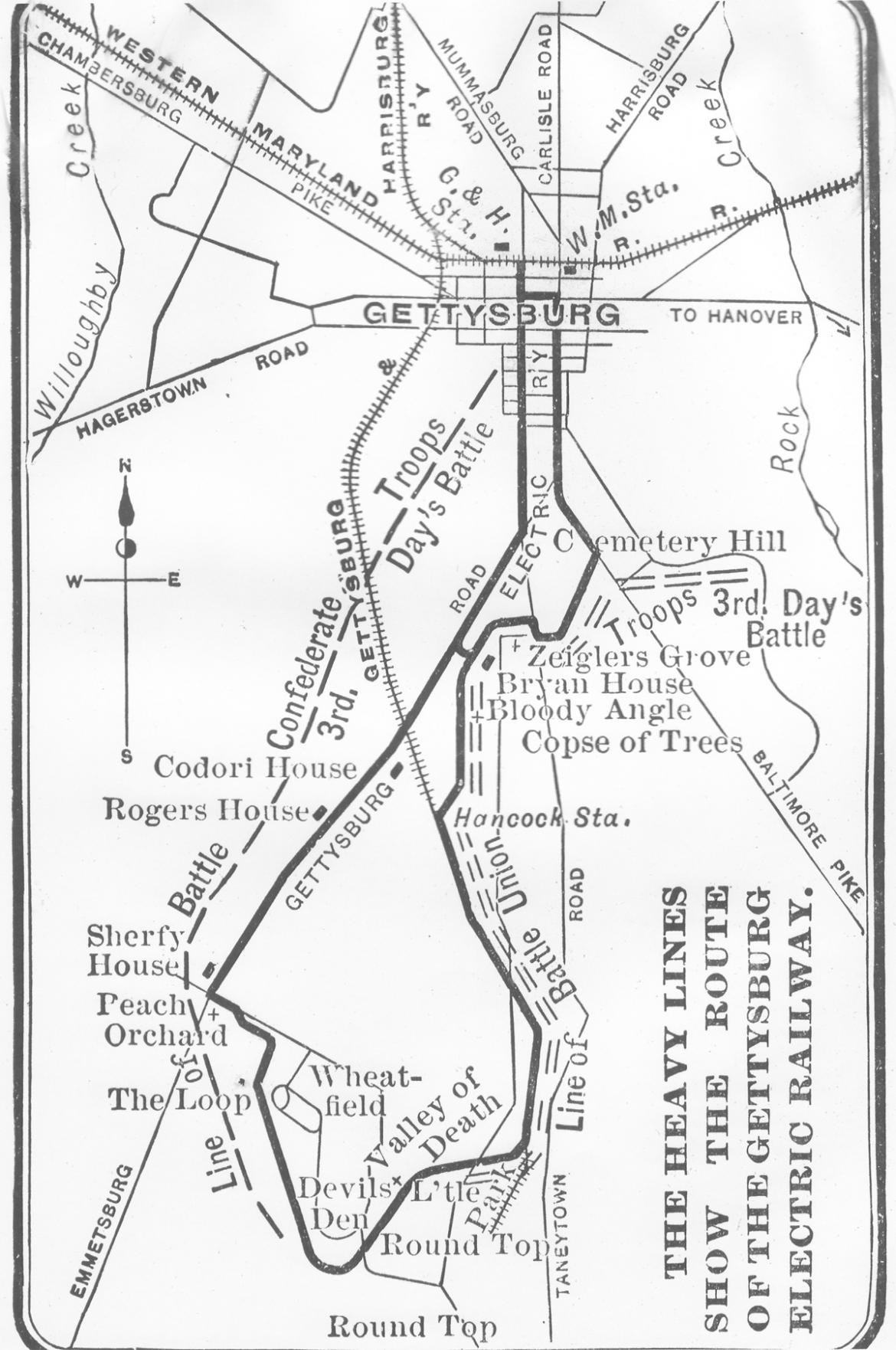 Here is the map of the planned route for the trolley that Rich showed in Video #3. Again, this was the proposed route, and circumstances which we will discuss in future posts will alter the trolley’s path. 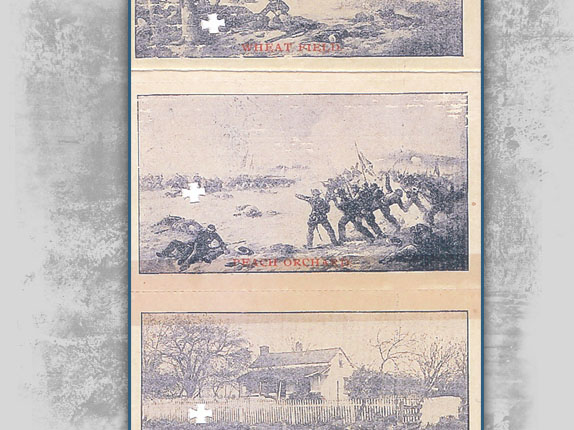 The tickets featured here are courtesy of Gettysburg Licensed Battlefield Guide Sue Boardman. Tickets were at one time required for the trolley, and there was a whole strip. Click on this picture to see the whole strip. There is a different panel for each of the stops on the battlefield, and this ticket strip was purchased from someone taking the “Sykes” trolley. We know that because the trolley conductor punched the ticket with the symbol for Syke’s Fifth Corps, the maltese cross. There were two sides to the ticket strip. One side showed the battlefield (especially those stops) “As It Was…” 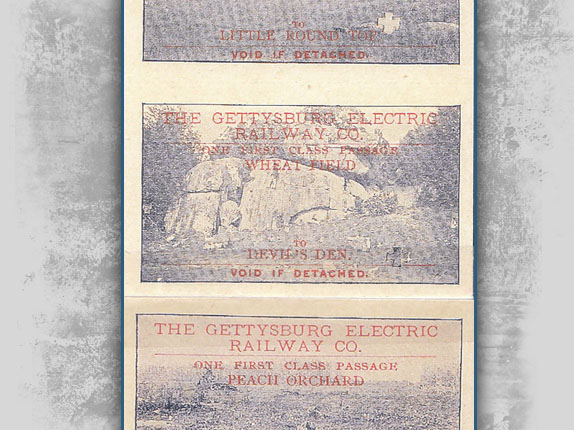 …and the other side showed the battlefield (those stops) “As It Is.” One did not give that section of the ticket strip to the conductor (note the words “void if detached.”) This was your souvenir to keep, and that is why they were punched with the corps symbol. Each trolley had it’s own distinctive punch based on the corps commander for which the trolley was named. So the Sykes had the maltese cross, the Howard (Eleventh Corps) had the crescent moon, etc… Again, please click on the picture to view the whole strip. 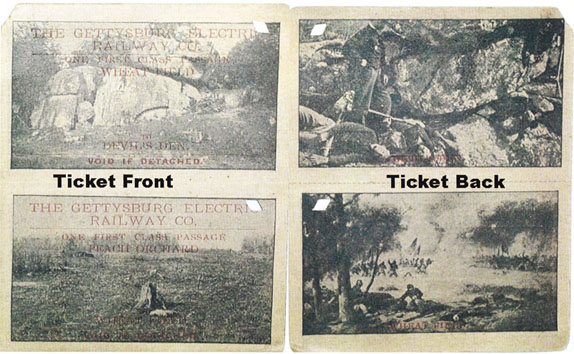 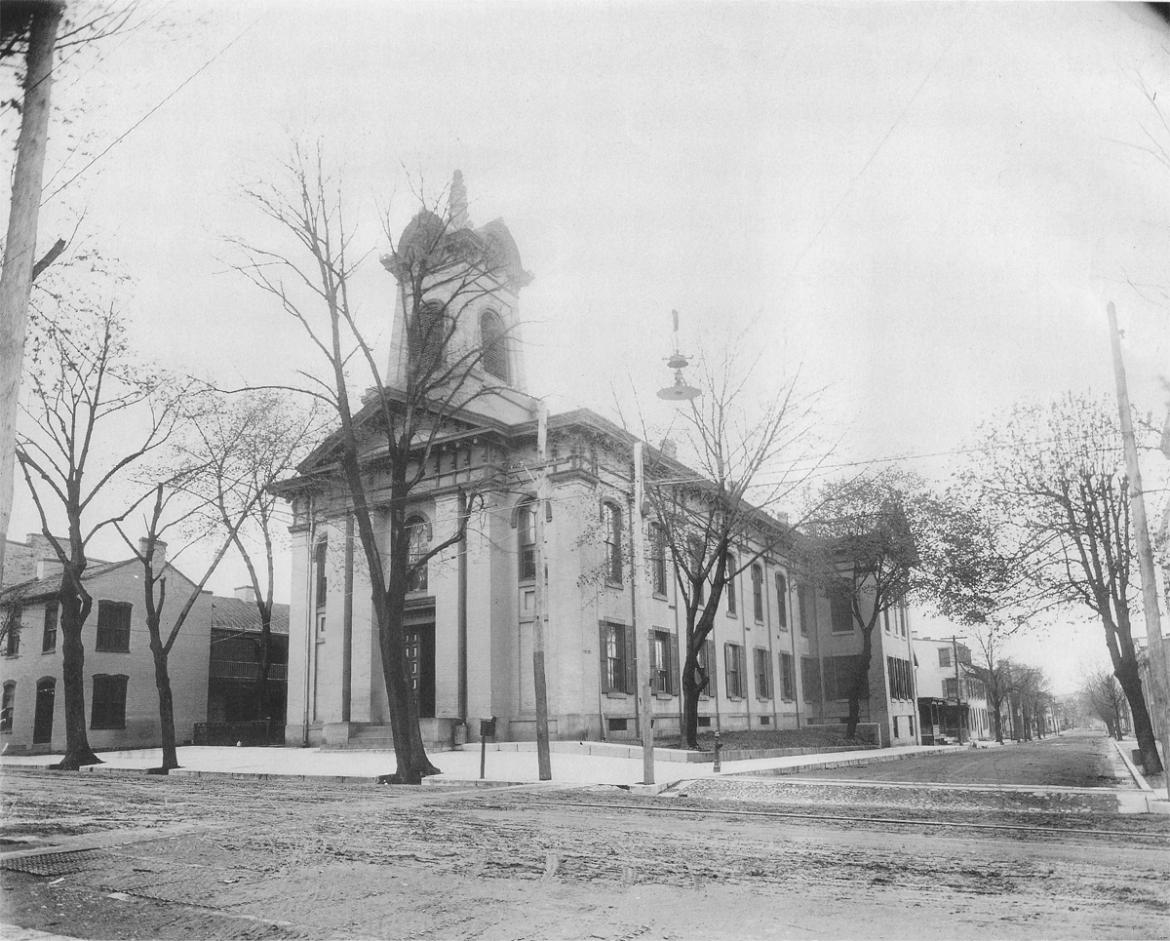 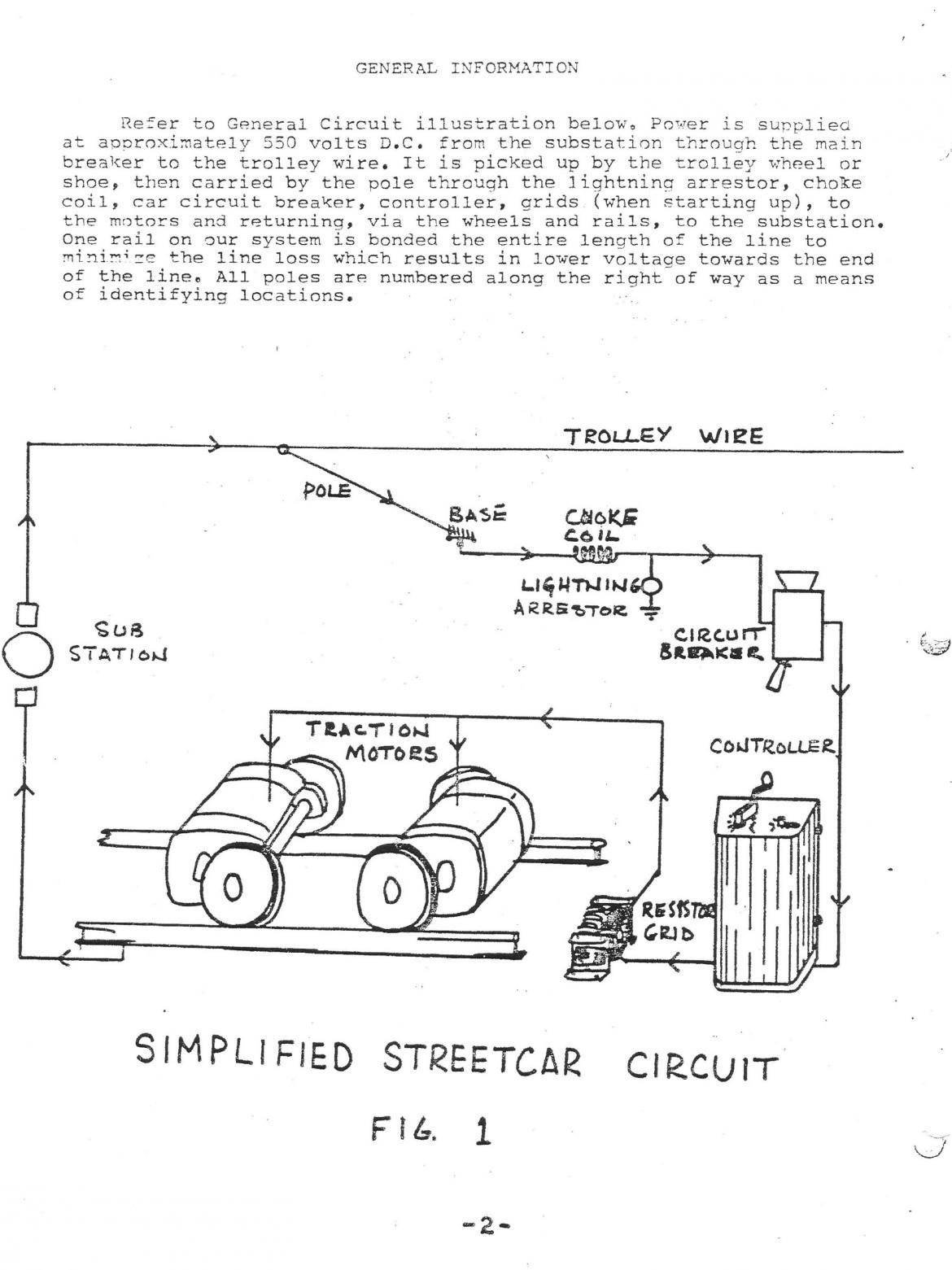 This image from the Shoreline Trolley Museum in Branford, Connecticut, shows the basic method by which the trolley operated. The controller is where the driver/motorman would stand to regulate the power on the trolley (make it go faster or slower). 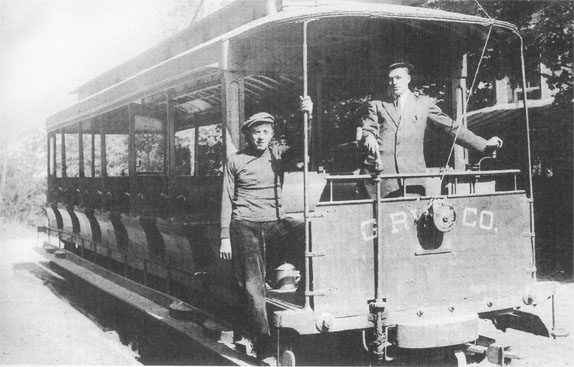 This picture shows the motorman/driver with his left hand on the controller, and his right hand on the brake. This view was sometime between 1893 and 1916. This photograph is courtesy of the National Park Service. 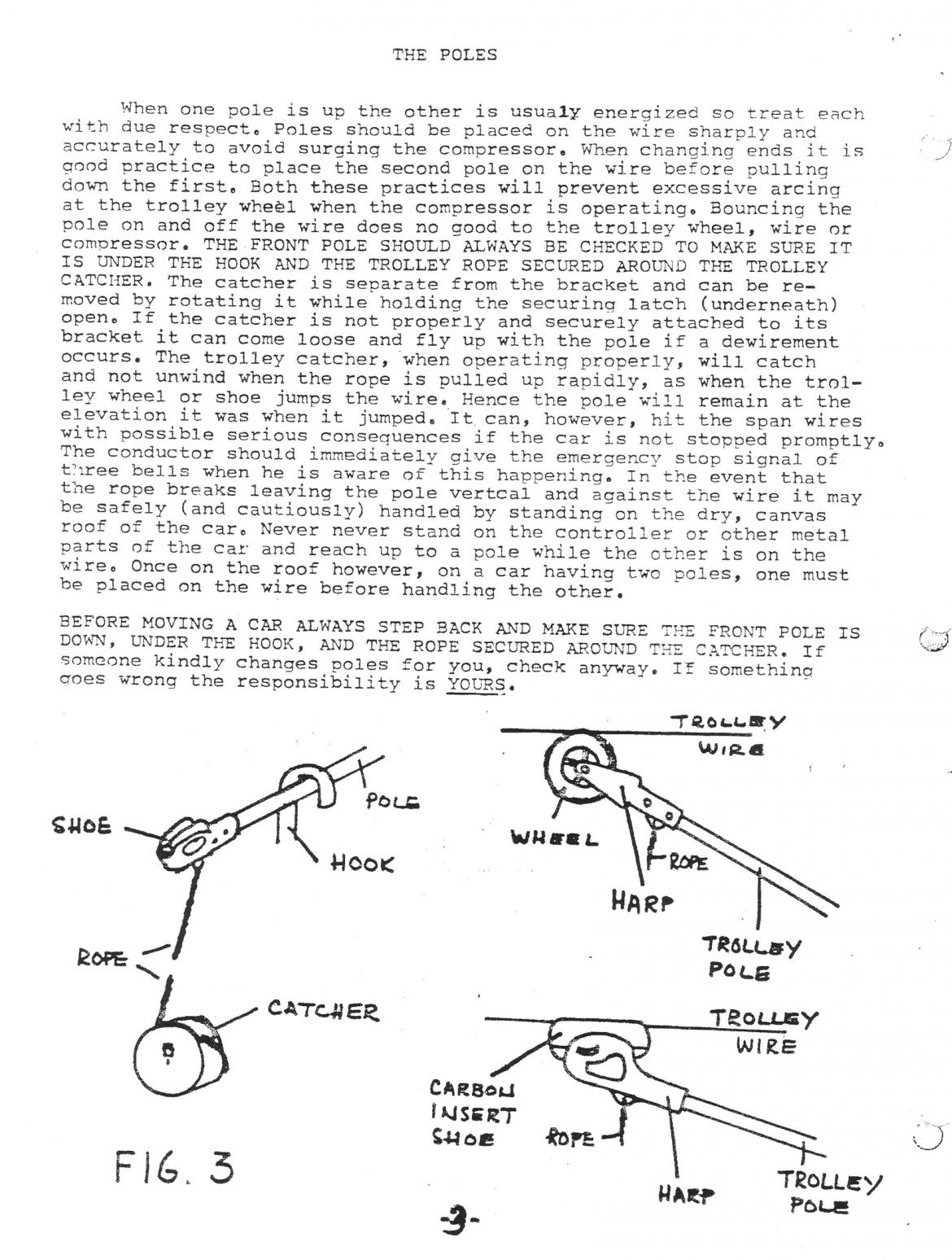 Here are the instructions given to operators of the trolley and drawings of the poles that connected to the electrical wires. This image is from the Shoreline Trolley Museum in Branford, Connecticut 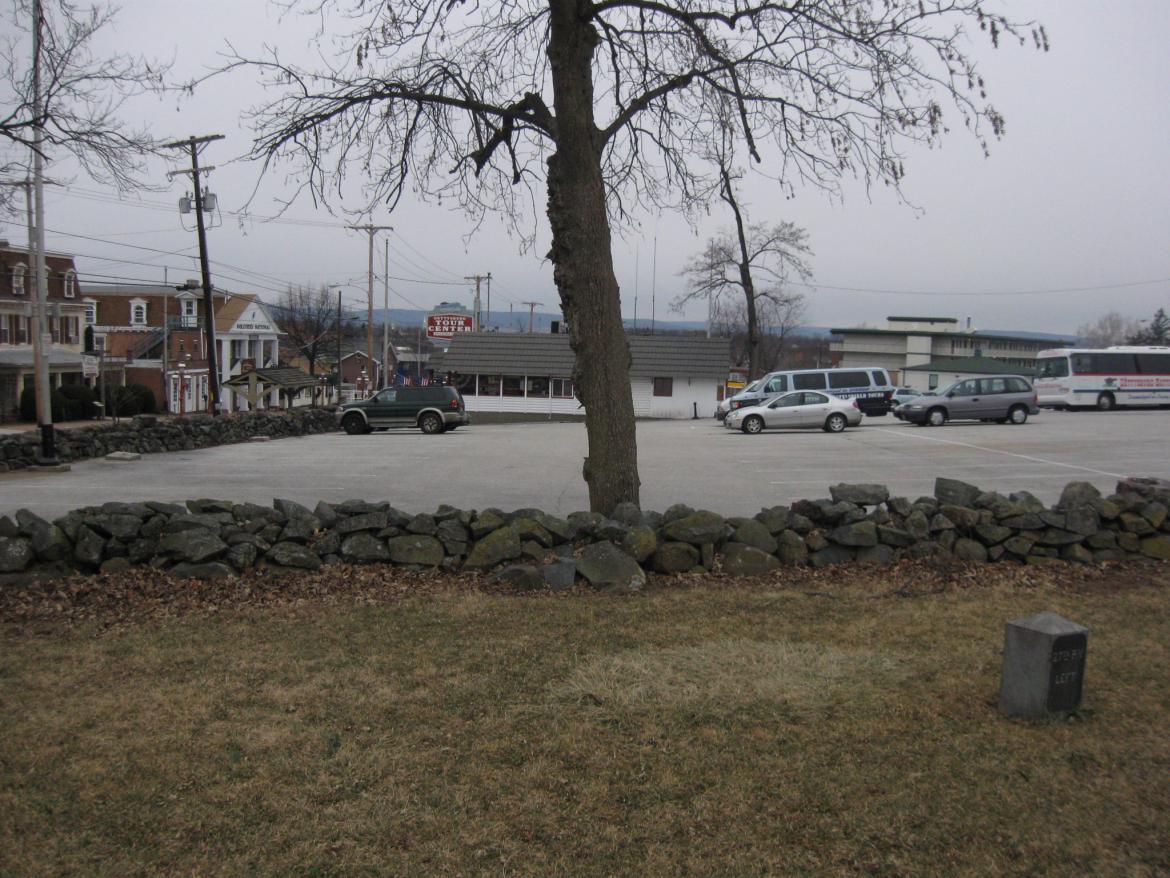 We’ve now reached Cemetery Hill, and East Cemetery Hill at this point. The Gettysburg Tour Center, which with its fleet of battlefield tour buses is the modern successor to the Gettysburg Trolley, is located here in the parking lot on the other (north) side of the stone wall. This view was taken facing north at approximately 10:30 AM on Friday, January 2, 2009.
In Video #4 Rich explains what the trolley did when it reached Cemetery Hill, and the Baltimore Street entrance to the Soldiers’ National Cemetery. We start the video facing north and then we will turn in multiple directions at approximately 10:30 AM on Friday, January 2, 2009. 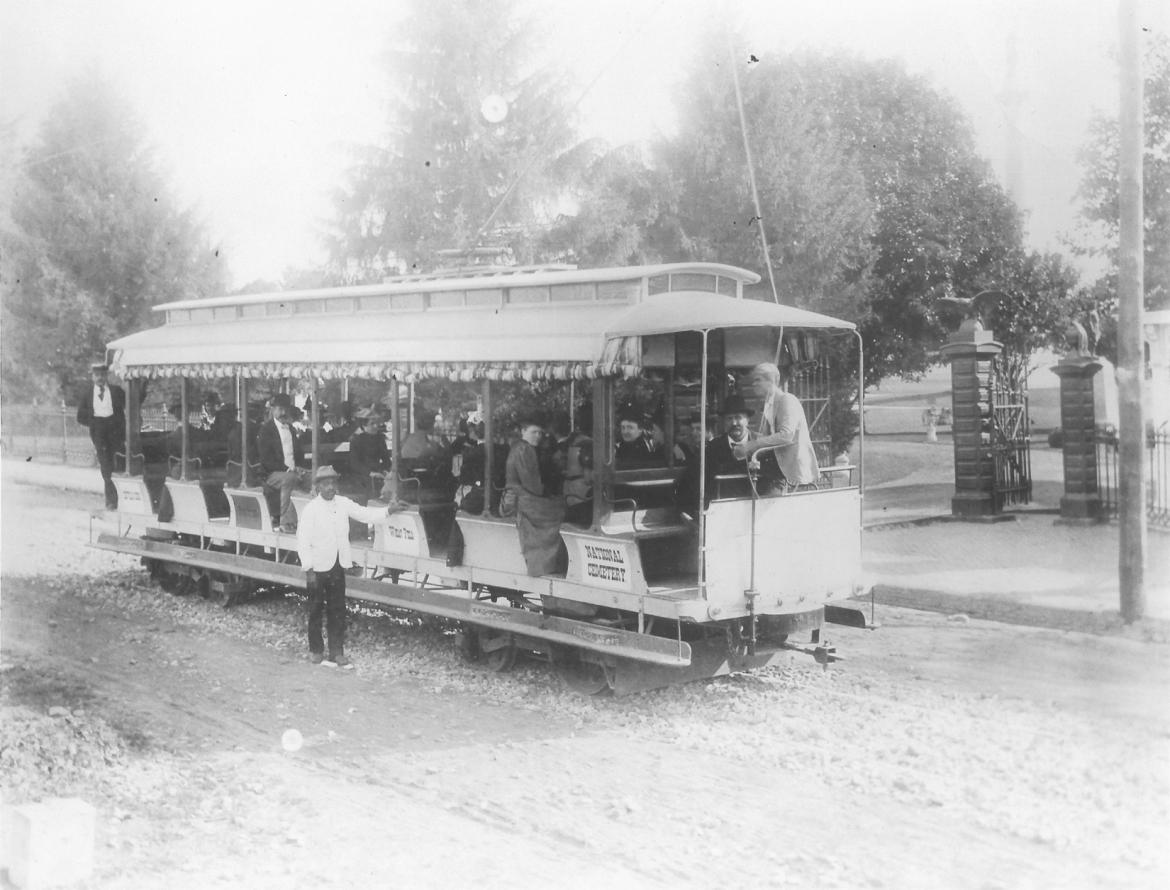 Here is the photograph that Rich showed us in Video #4. Notice the pole at the top of the car. It starts in the middle of the roof and goes to the top right of the car where it contacts the wire. This will help show you in future photographs which way the car is going. This means the car is traveling to its left (south) or would be outbound (going out of the town of Gettysburg). This photograph is courtesy of the National Park Service. This view was taken facing southwest between 1893 and 1917.

The trolley changed hands a couple of times during its operation. Some owners didn’t use the tickets we showed you, and instead used tokens. 10 cents was for an unguided tour, and 25 cents was a tour with a guide. These tokens are courtesy of Gettysburg Licensed Battlefield Guide Sue Boardman. 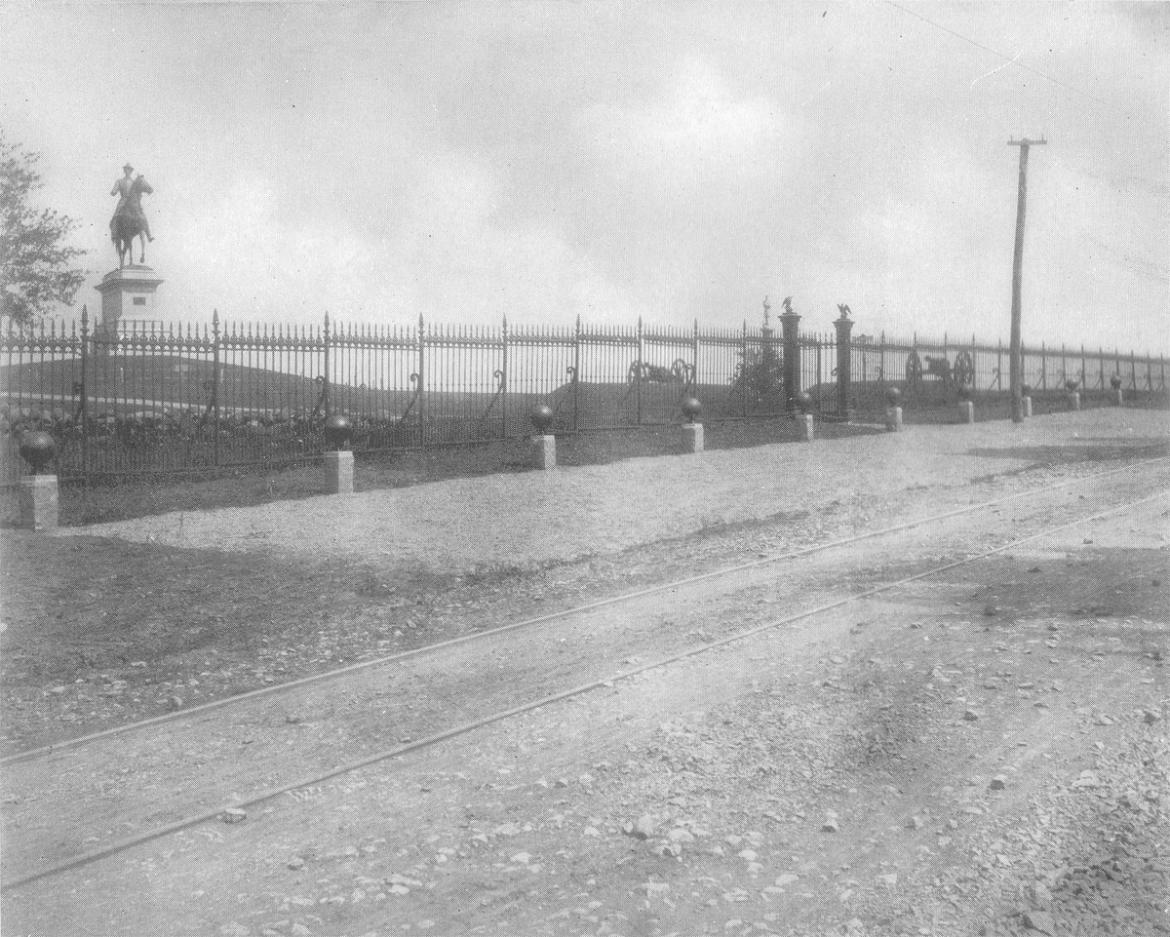 The trolley then continued over the crest of Cemetery Hill on the Baltimore Pike. The equestrian statue to United States Major-General Winfield Scott Hancock is on theÂ left. The fence is the Sickles Witness Fence, which was later moved, and now separates the Soldiers’ National Cemetery from Evergreen Cemetery. This view was taken facing southeast between 1893 and 1917. This photograph is courtesy of the National Park Service. 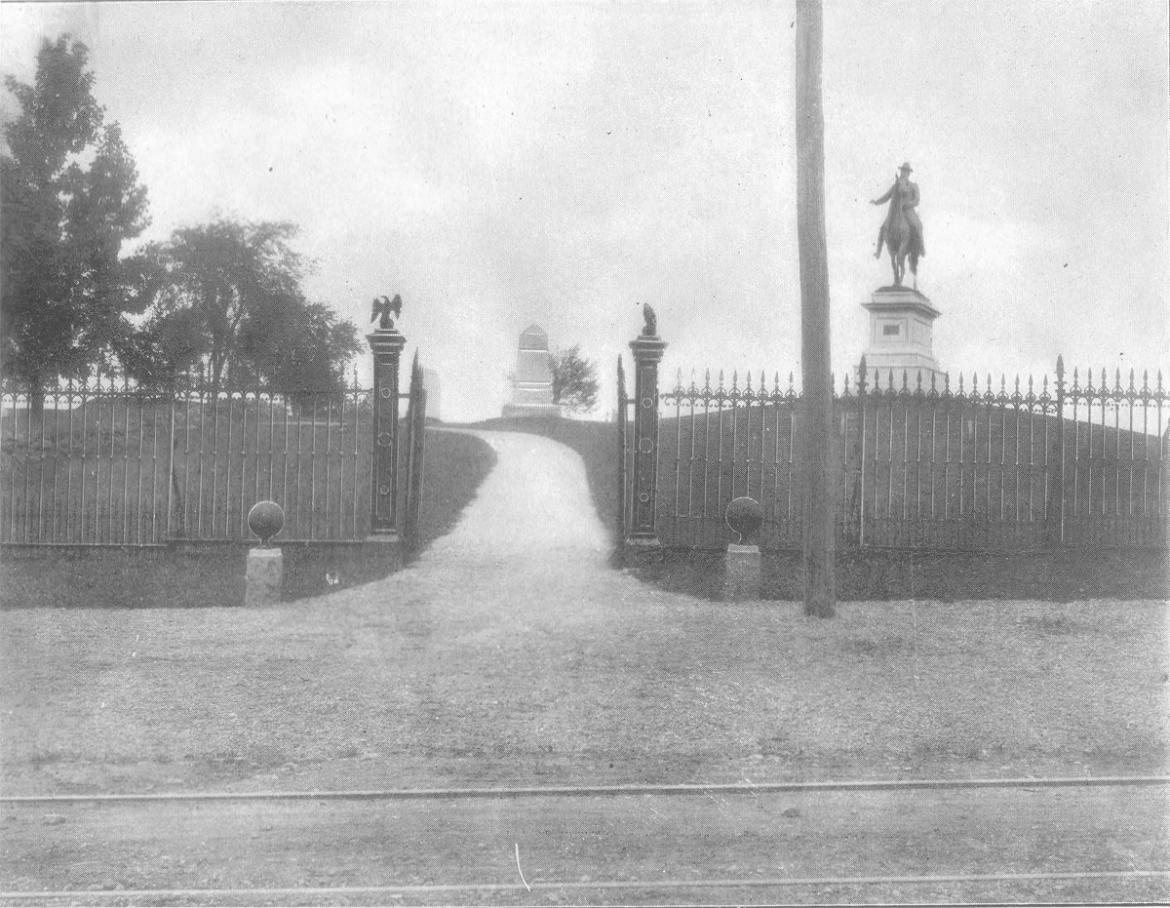 Let’s pause a moment to look at the entrance gate on the Sickles fence, and the path that leads from it towards the Hancock statue. This view was taken facing east between 1893 and 1917. This photograph is courtesy of the National Park Service. 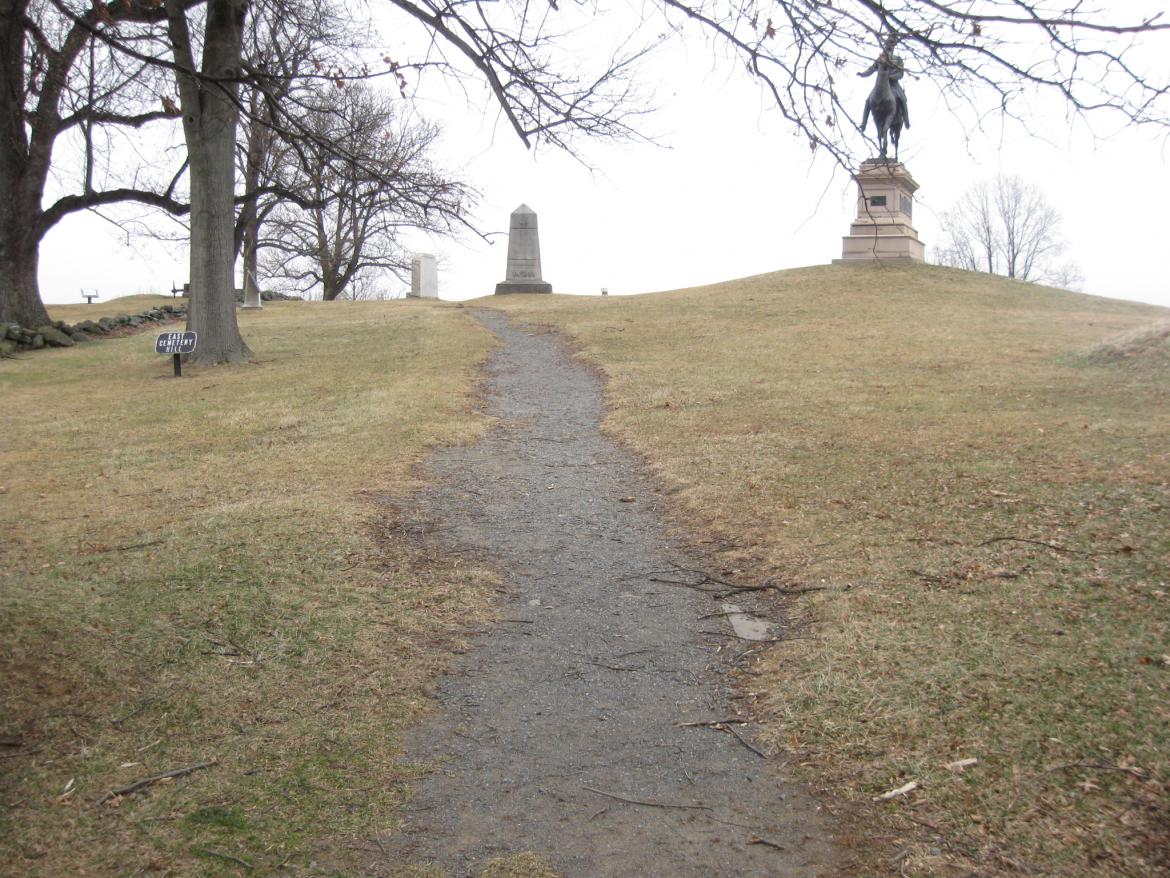 The location of the entrance is still clearly marked today by the pathway. This view was taken facing east at approximately 10:30 AM on Friday, January 2, 2009. 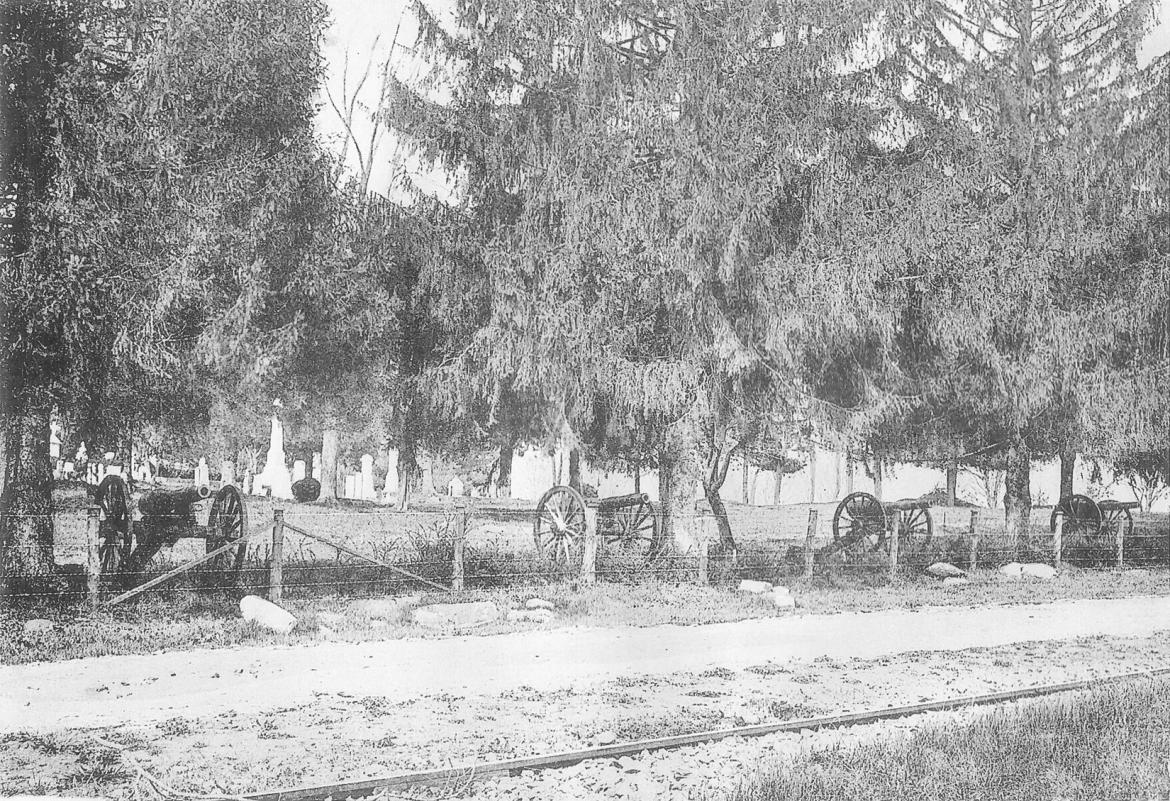 We’ve gone over (down the south side of Cemetery Hill on the Baltimore Pike. The trolley tracks are visible in front of the guns marking the position of Taft’s 5th New York Battery. Evergreen Cemetery is in the background. This view was taken facing southwest between 1893 and 1917. This photograph is courtesy of the National Park Service. 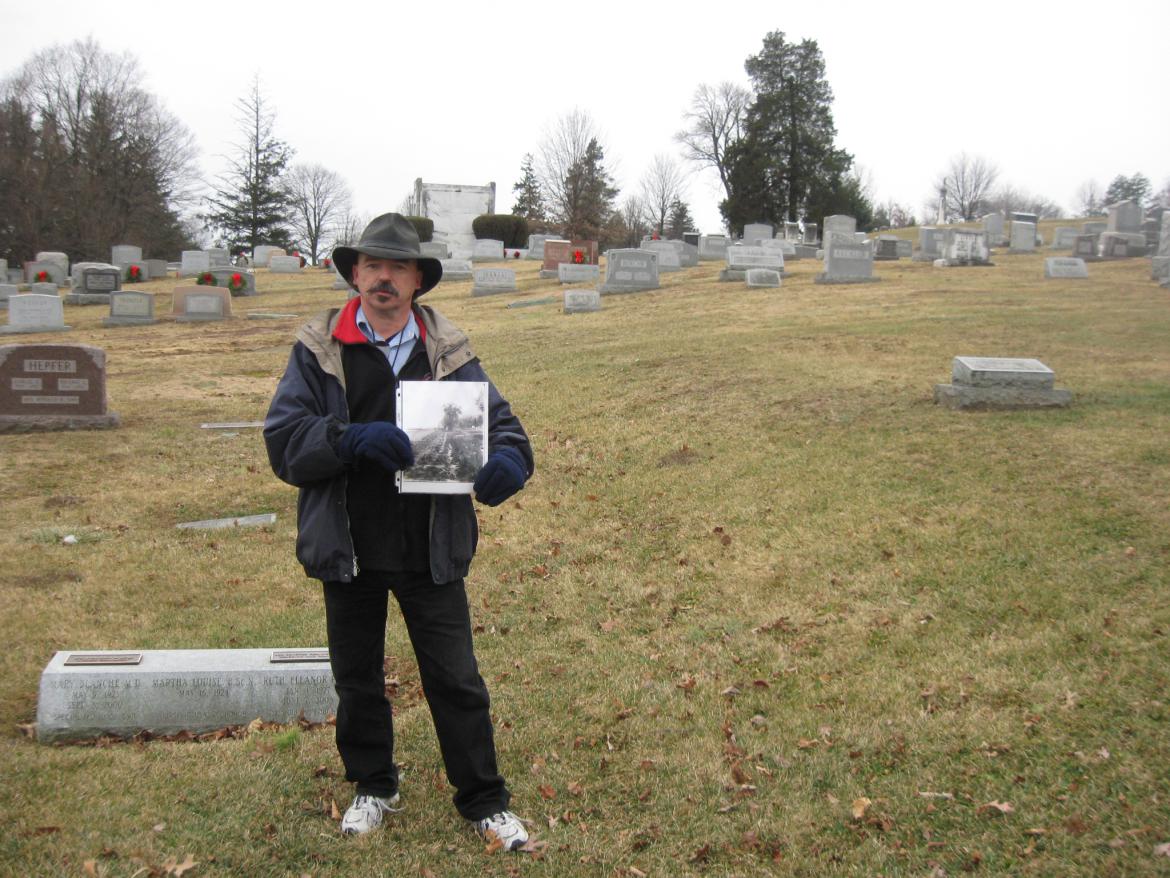 Rich is standing in Evergreen Cemetery in a dip where the trolley cut a path through what at one time was the south edge of the cemetery. He is holding a photograph taken at this location. The stones that helped us locate this position were the twin Bushman headstones. To find them, look at the large evergreen tree on the right. Follow its trunk down until you come to the twin Bushman headstones. This view was taken facing southwest at approximately 10:30 AM on Friday, January 2, 2009.
In Video #5, Rich shows us how the trolley lined entered what was then the southern boundary of Evergreen Cemetery. The construction on the south edge of Evergreen Cemetery is an event that nobody would even think of doing today because we are much more enlightened. This view was taken facing northeast to a couple of other directions at approximately 10:30 AM on Friday, January 2, 2009. 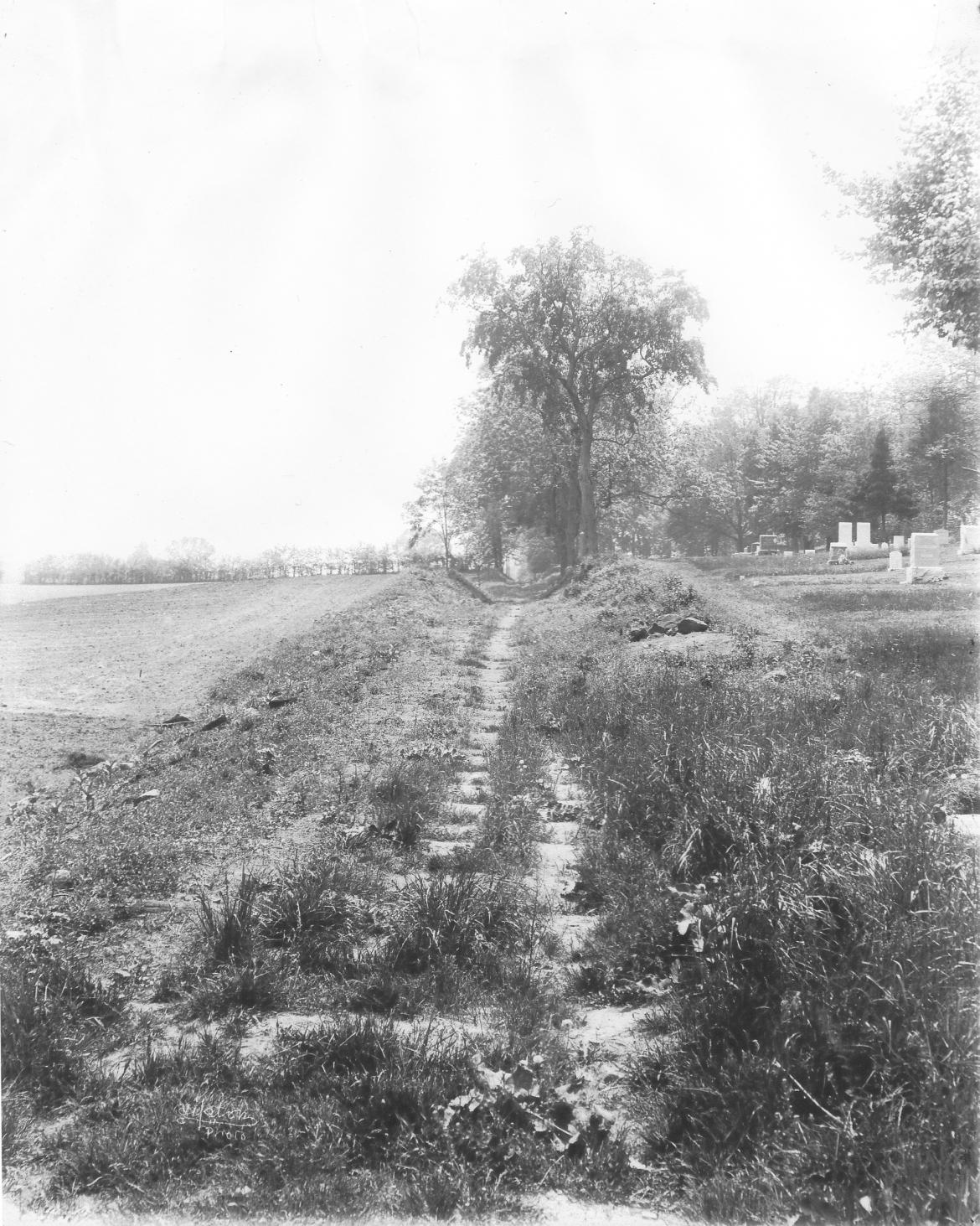 Here is the photograph that Rich showed us in Video #5. The twin, white, Bushman headstones are prominent to the right of the cut. This view was taken facing southwest in 1918. This photograph is courtesy of Sue Boardman.