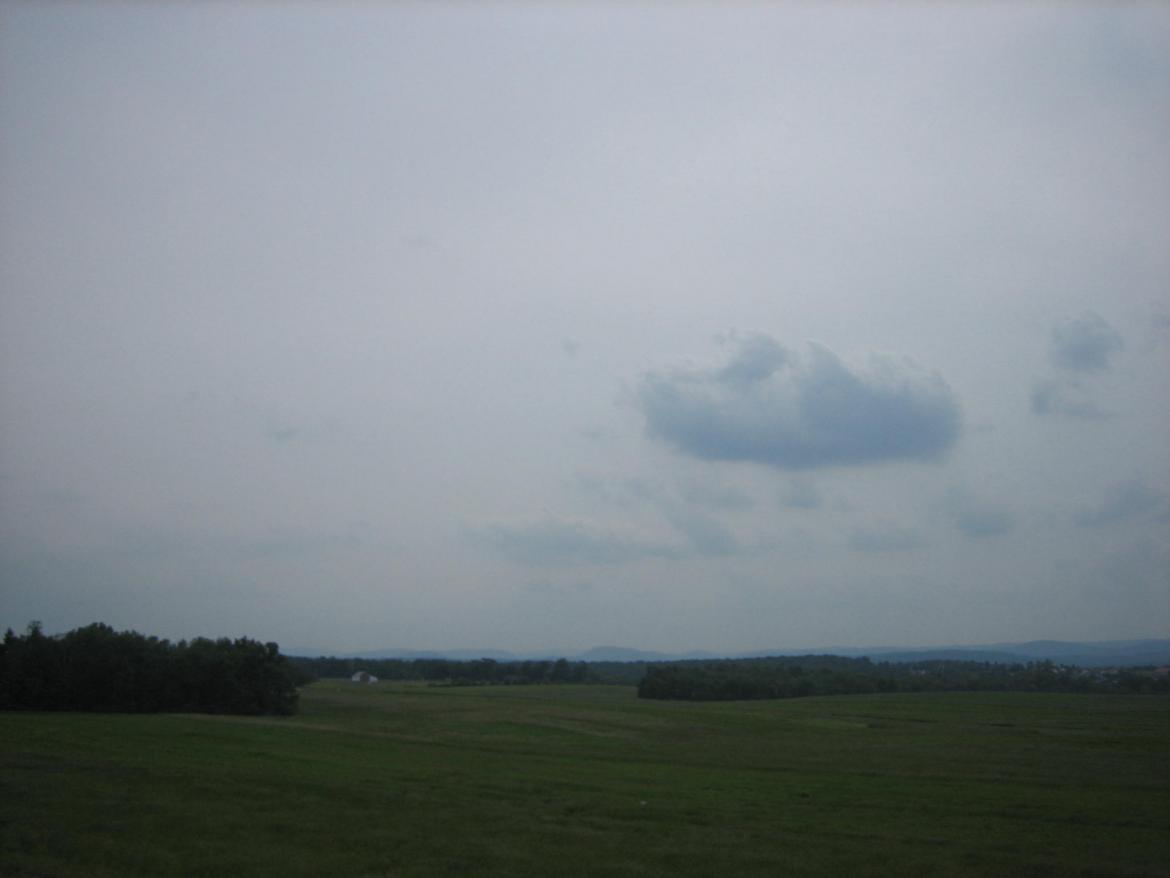 The South Mountains, or Blue Ridge Mountains or Appalachian Mountains are in the distance. The McPherson Barn is in the background. General Robert E. Lee stated that in one of his reports about the battle of Gettysburg, that “the position occupied by the enemy opposite Fredericksburg being one in which he could not be attacked to advantage, it was determined to draw him from it.” This view was taken from the northeast facing southwest at approximately 4:30 PM on Tuesday, June 3, 2008.

The Gettysburg Campaign began 145 years ago today, on June 3, 1863. General Robert E. Lee’s Confederate Army of Northern Virginia began to leave Fredericksburg, Virginia on that day. Eventually the Confederates used the Appalachian Mountains to screen their movements from the United States’ Army of the Potomac under Major-General Joseph Hooker. The Gettysburg Daily took photographs of these mountains from the Oak Ridge Tower. Storm clouds were approaching the borough, and thunderstorms and are expected tonight and tomorrow.

The orange roof of a structure near Herr’s Tavern is visible in the background of this view. Other reasons for Lee’s movement west of the mountains were to “provide the relief of the Shenandoah Valley from the troops that had occupied the lower part of it during the winter and spring, and if practicable, the transfer of the scene of hostilities north of the Potomac.” This view was taken from the northeast facing southwest at approximately 4:30 PM on Tuesday, June 3, 2008.

The monuments on Forney Ridge or the west arm of McPherson’s Ridge are visible in this view. Lee continued with his reasons for the Gettysburg Campaign: “It was thought that the corresponding movements on the part of the enbemy to which those contemplated by us would probably give rise, might offer a fair opportunity to strike a blow at the army then commanded by General Hooker…” This view was taken from the northeast facing southwest at approximately 4:30 PM on Tuesday, June 3, 2008.

The monument to the 17th Pennsylvania Cavalry regiment is now visible on the right side of this view. Lee’s report for the campagin continued, “… and in any event that army would be compelled to leave Virginia, and possibly, to draw to its support troops designed to operate against other parts of the country. In this way it was supposed that the enemy’s plan of campaign for the summer would be broken up…” This view was taken from the east facing west at approximately 4:30 PM on Tuesday, June 3, 2008.

The Mummasburg Road and the Eternal Light Peace Memorial (Peace Light) are shown to the right in this view. Lee continued his report, “the movement began on June 3rd. McLaws’ Division of Longstreet’s corps, left Fredericksburg for Culpeper Court-House, and Hood’s division, which was encamped on the Rapidan, marched to the same place.” This view was taken from the southwest facing northeast at approximately 4:30 PM on Tuesday, June 3, 2008.