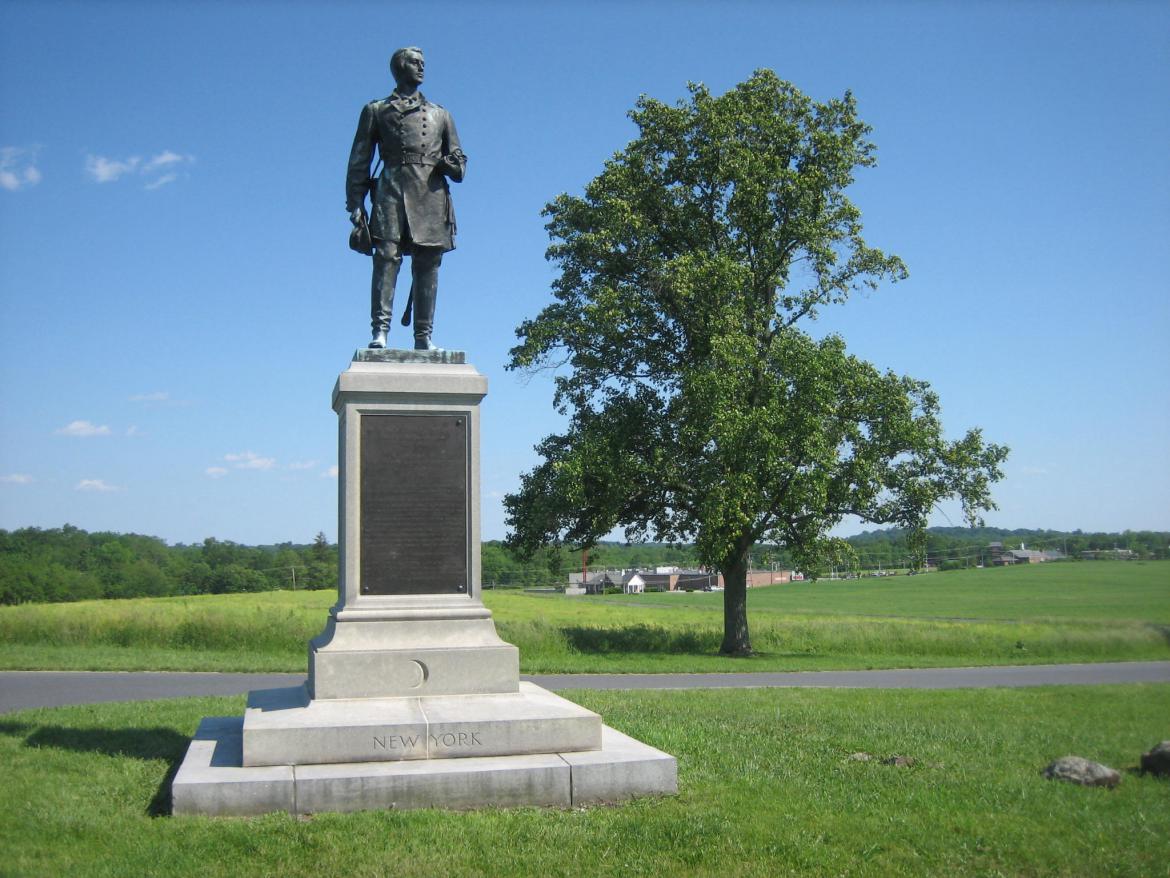 Francis Channing Barlow was born on October 19, 1834 in Brooklyn, New York, was raised in Brookline Massachusetts, and would have been 29 years old at the time of the Battle of Gettysburg. His youthful features and manner of dress, however, encouraged some to call him “an independent mounted news boy.” Barlow graduated from Harvard University in 1855, went to New York and studied law where he was admitted to the bar in 1858. At Gettysburg, he commanded a division in Oliver O. Howard’s 11th Corps. This view was taken from the northwest facing southeast at approximately 4:30 PM on Monday, June 2, 2008.

The statue of Brigadier-General Francis Channing Barlow was the subject of today’s photographs. Located on Barlow Knoll, along Howard Avenue, the statue marks the spot where Barlow wanted to make sure he controlled high ground on the first day, July 1, 1863. Reminiscent of Major-General Daniel Sickles’ move toward high ground at Sherfy’s Peach Orchard on July 2, 1863, Barlow has been criticized for not having enough men to adequately defend the new ground he was occupying, and forming a salient which could be attacked from two directions. He has also been second-guessed for moving his men to this exposed position instead of leaving them closer to the alms house where the buildings and the contours of the ground might have helped to protect them. 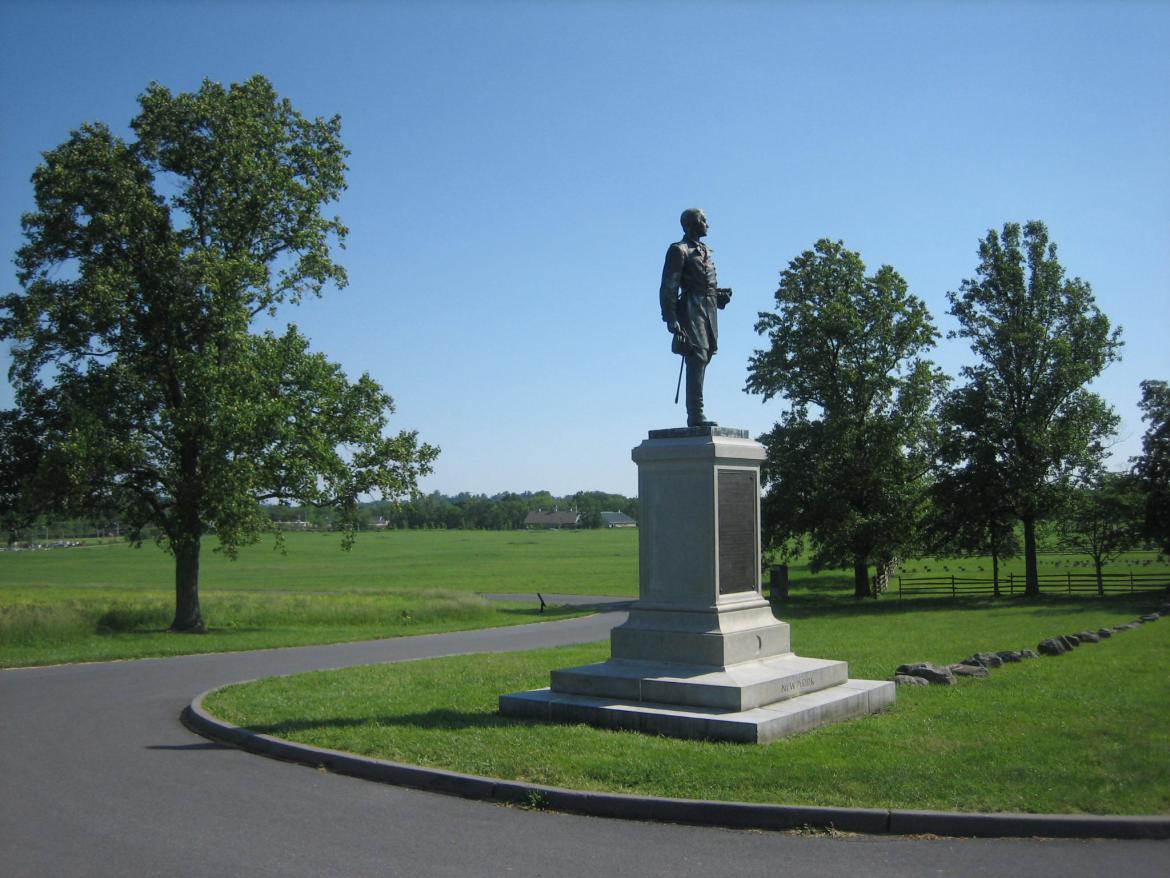 Barlow has been criticized for leaving the ground around the Adams County Alms House, now occupied by the Adams County Agricultural building seen in the background near the treeline. There is also some evidence that his corps commander, Major-General Howard might have moved him here to Blocher’s Knoll, now known as Barlow’s Knoll. This view was taken from the north facing south at approximately 4:30 PM on Monday, June 2, 2008.

Possibly another problem that Barlow had was that he became fixated on Confederates to his northwest, especially Dole’s Georgia Brigade. His statue is looking in that direction. He will be attacked by Gordon’s Georgia Brigade from the north and east– the direction in which the cannon are pointing. His division will be driven from this area, and Barlow was wounded by projectile which temporarily paralyzed his arms and legs. His wife Arabella was allowed through the lines to nurse him at various structures including the Crawford House. This view was taken from the south facing north at approximately 4:30 PM on Monday, June 2, 2008. 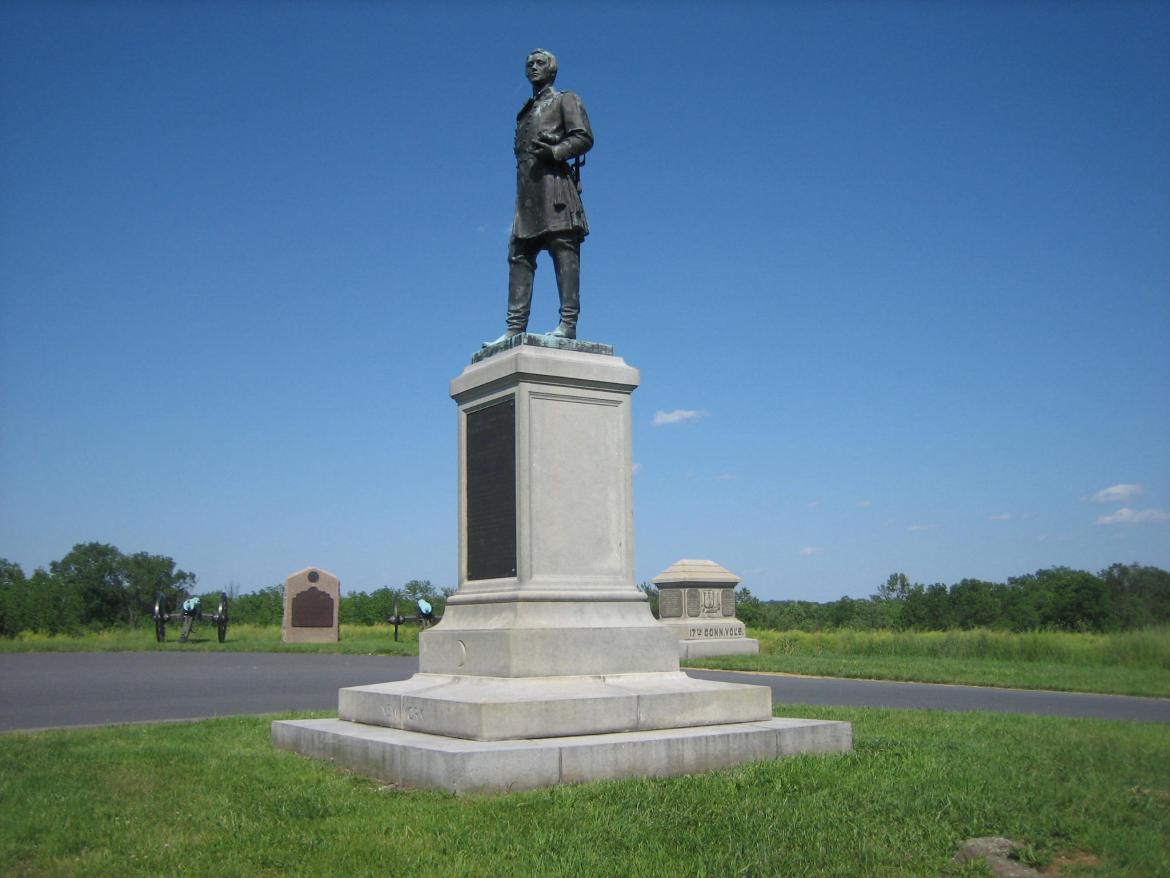 Barlow’s wife, Arabella died in 1864, and Francis Barlow later married Ellen Shaw, the sister of Robert Gould Shaw of the 54th Massachusetts Regiment. After the war, the Republican Barlow prosecuted Boss Tweed who was the head of the Democrat’s (and Sickles’) Tammany Hall. Francis Barlow was also a founder of the American Bar Association. Barlow died on January 11, 1896, and is buried in Walnut Street Cemetery, Brookline, Massachusetts. Barlow’s monument was dedicated on June 6, 1922. The sculptor of the statue was J. Massey Rhind. The pedestal was designed by Edward P. Casey. This view was taken from the southwest facing northeast at approximately 4:30 PM on Monday, June 2, 2008.