The 123rd New York Monument on Lower Culp’s Hill, or as some have labeled it, Spangler’s Hill. This view was taken from the southwest facing northeast at approximately 4:15 PM on Friday, March 14, 2008.

It’s late afternoon, and the The Gettysburg Daily stopped by one of the many monuments that do well in reflecting the western light. The monument to the 123rd New York Infantry Regiment, on South Slocum Avenue, was dedicated on September 4, 1888. On top of the monument is Clio, the muse of history, as she writes the events of the battle of Gettysburg on her tablet.

The 123rd New York brought 465 men and officers to the Battle of Gettysburg. They built earthworks or breastworks at this position on July 2nd before they were withdrawn for action near Cemetery Ridge. When they returned to this area the night of July 2nd, the Confederates had occupied their earthworks. Efforts to retake the position resulted in the death of one man, and the capture of a junior officer of the regiment. View from the west facing east at approximately 4:15 PM on Friday, March 14, 2008.

The monument is made of Westerly Granite and standard bronze. The cost was $4000. The sculptor for this monument was J.G. Hamilton, and the contractor was the Smith Granite Company of Westerly, Rhode Island. The height is 18’2″ and the base of the monument is 8’0″ square. View from the northwest facing southeast at approximately 4:15 PM on Friday, March 14, 2008. 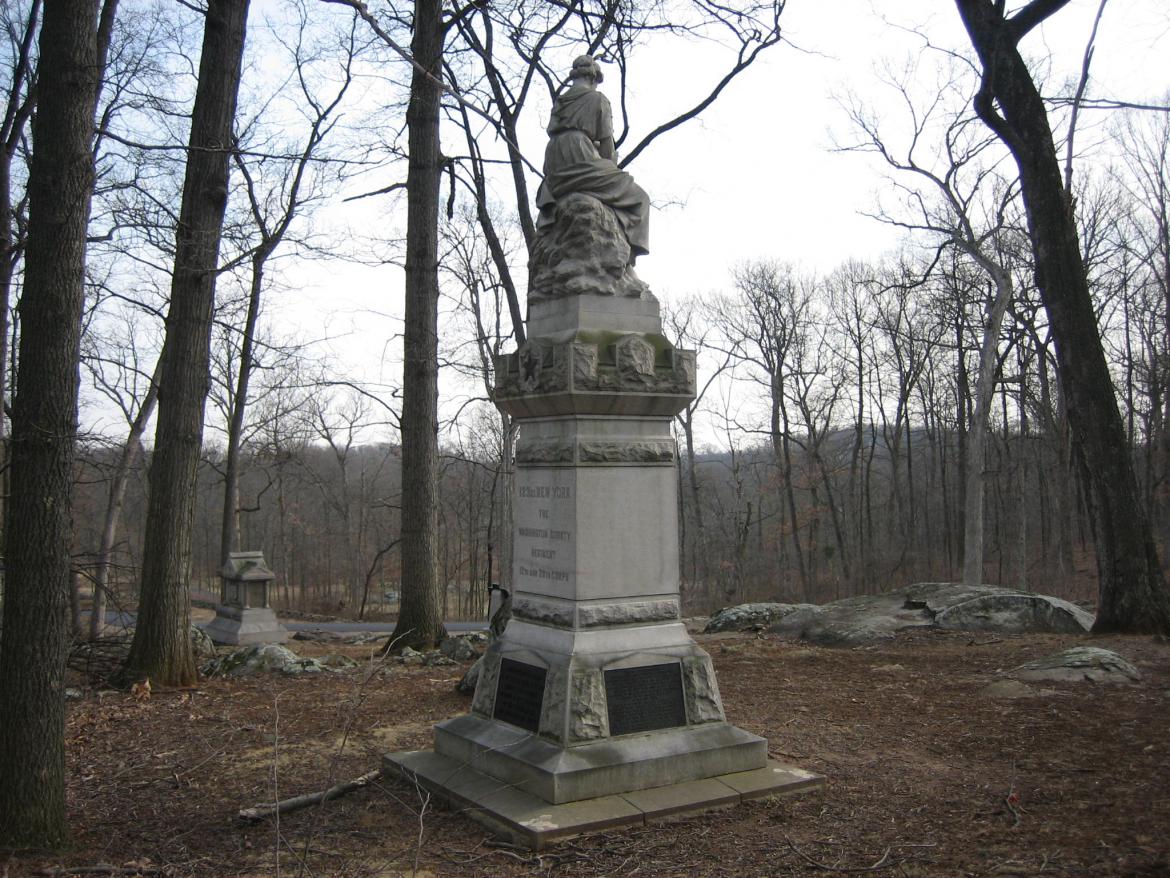 The 123rd New York was raised in Washington County, New York, and was mustered into United States service on September 4, 1862. It participated in the battles of Chancellorsville and Gettysburg, the Atlanta Campaign and the Carolina Campaign. During the war, a total of 338 of men and officers were killed, wounded, captured, or missing. View is from the northeast facing southwest at approximately 4:15 PM on Friday, March 14, 2008.

The 123rd New York reoccupied this area at approximately 2:00 PM on July 3rd. During the afternoon they experienced a severe artillery shelling. Total casualties for the Battle of Gettysburg were three men killed, nine wounded, and one captured, for a total of 13. View from the southwest facing northeast at approximately 4:15 PM on Friday, March 14, 2008.