The 1904 Relief Map of the Gettysburg Battlefield is now on display in the new National Park Service Visitor Center. Unfortunately, while it is mounted on the north wall, it is oriented to the east. The correct perspective would be achieved by turning the map clockwise 90 degrees (the left side of the map in this view should be at the top). This view was taken from the south facing north at approximately 7:30 AM on Saturday, June 7, 2008.

The Electric Map was not brought over to the new visitor center, but the War Department’s 1904 Relief Map of the battlefield has finally made its way to the new facilities. The map was constructed under the supervision of War Department Engineer Emmor B. Cope. It was displayed in St. Louis during the 1904 World’s Fair in St. Louis (also known as the Louisiana Purchase Exposition). It was housed in Gettysburg in the government office building at the corner of Baltimore Street and East High Street, where the Adams County Library is now located. It was later moved to the Cyclorama Center, where it was located on the second floor until it was moved over this week. A problem that one might have with the way it is currently displayed is that it is not oriented to the north, which is how one views it in its new location. It is oriented to the east. This could be a problem for any National Park Service Rangers, volunteers, and/or Licensed Battlefield Guides who might want to orient visitors to the battlefield before they take them on a tour. 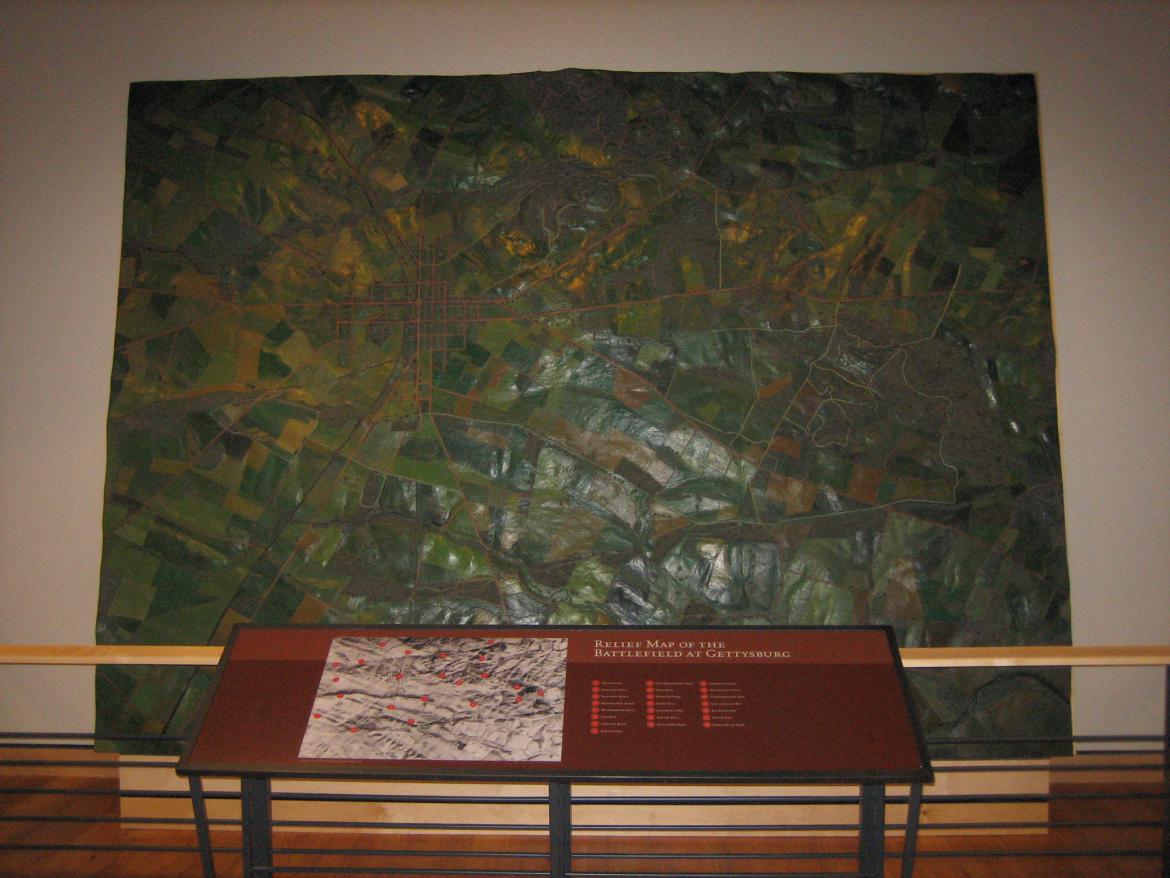 There might also be a conflict between lighting the map well enough so that visitors can view it better and the desire to keep the map in low light so it does not fade. It also used to be displayed “flat” so visitors could wander around it to get a closer view of all sides. Unfortunately, some visitors decided to take off parts of the map (buildings and other structures) as souvenirs. This view was taken from the south facing north at approximately 7:30 AM on Saturday, June 7, 2008.

There are three “waysides” to help interpret the map. This one explains it’s history. This view was taken from the south facing north at approximately 7:30 AM on Saturday, June 7, 2008. 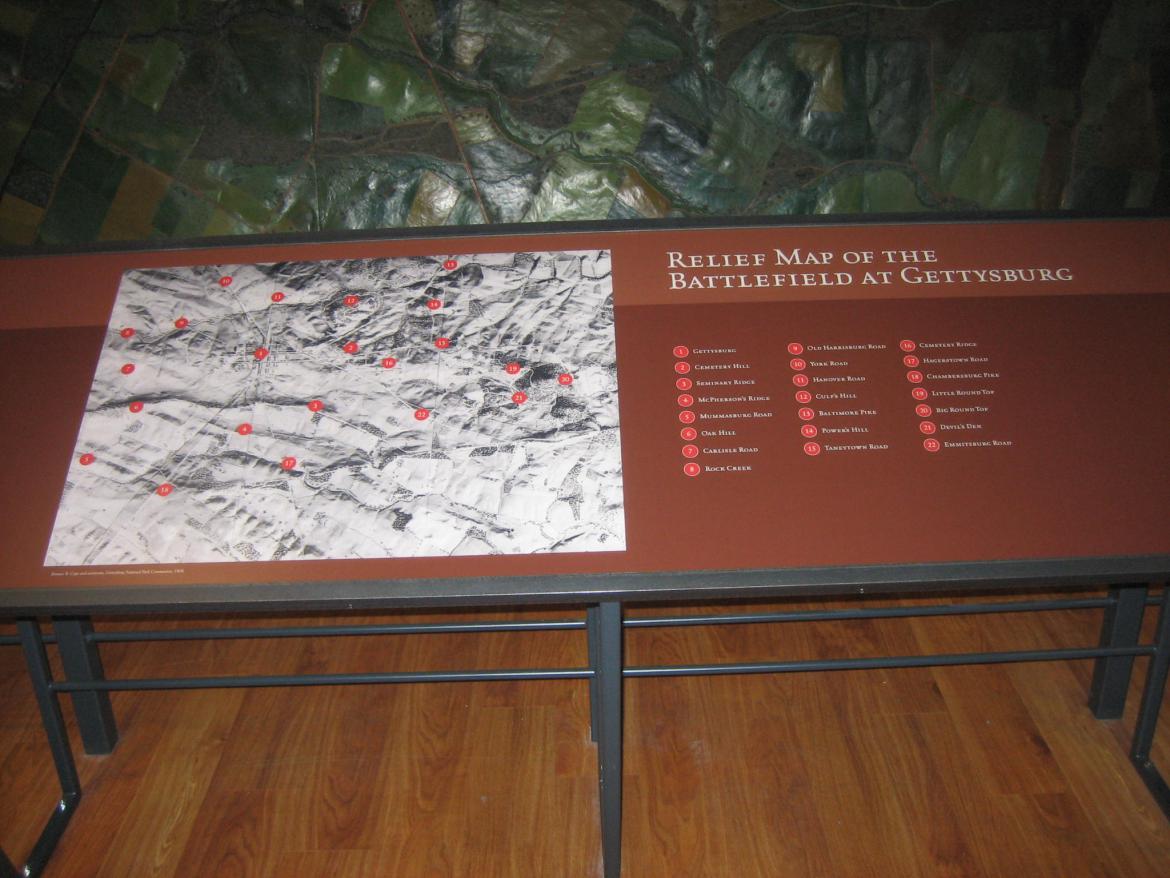 This display has red dots with numbers on the photograph, but not on the map itself. This just doesn’t work for us. It takes too much work to orient one’s self. This view was taken from the south facing north at approximately 7:30 AM on Saturday, June 7, 2008.

A history of Emmor B. Cope (1834-1927). Cope was a sergeant under Chief Engineer Gouvenour K. Warren at the Battle of Gettysburg. After the battle, he was put in charge of the first survey and cartographic depiction of the Gettysburg Battlefield. This “Cope Map” remains an indispensable tool for historians of the early battlefield. All of the early work of the Gettysburg National Park Commisssion (as it was then known) involved E.B. Cope–surveying land, constructing roads, marking positions, and erecting observation towers. Using text developed through Commissioner John Bachelder’s correspondence and interviews with veterans, Cope worked to place itinerary tablets in various locations in Maryland and Pennsylvania to denote important phases of the Gettysburg Campaign. On a more detailed level, Cope worked with the GNPC as bronze plaques were erected for every Union and Confederate battery, brigade, division, corps, and army that participated in the Battle of Gettysburg. He also assisted with the placement of itinerary tablets for both armies during the battle. Cope is buried in Evergreen Cemetery, Gettysburg, Pennsylvania. This view was taken from the south facing north at approximately 7:30 AM on Saturday, June 7, 2008. 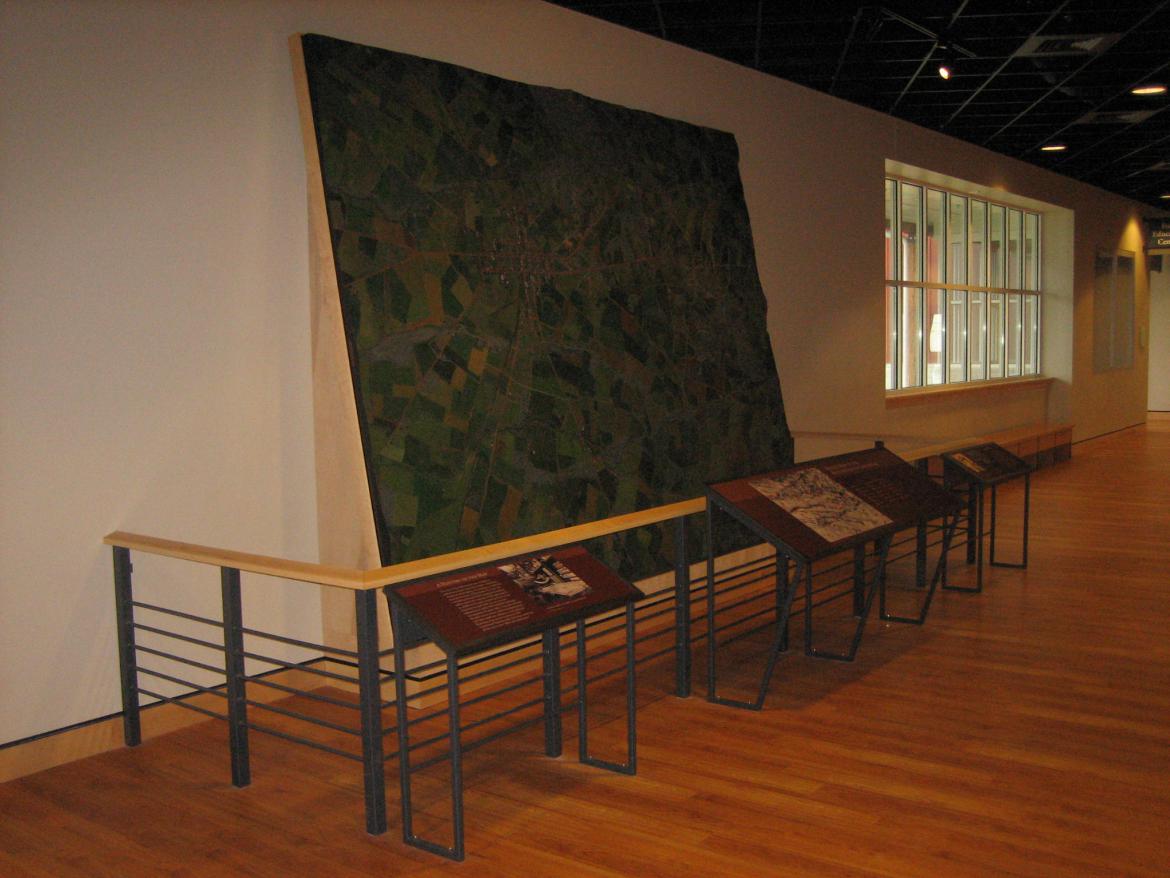 The windows to the right look out to the north. Wouldn’t it have been nice to orient the map in this direction as well? This view was taken from the southwest facing northeast at approximately 7:30 AM on Saturday, June 7, 2008.