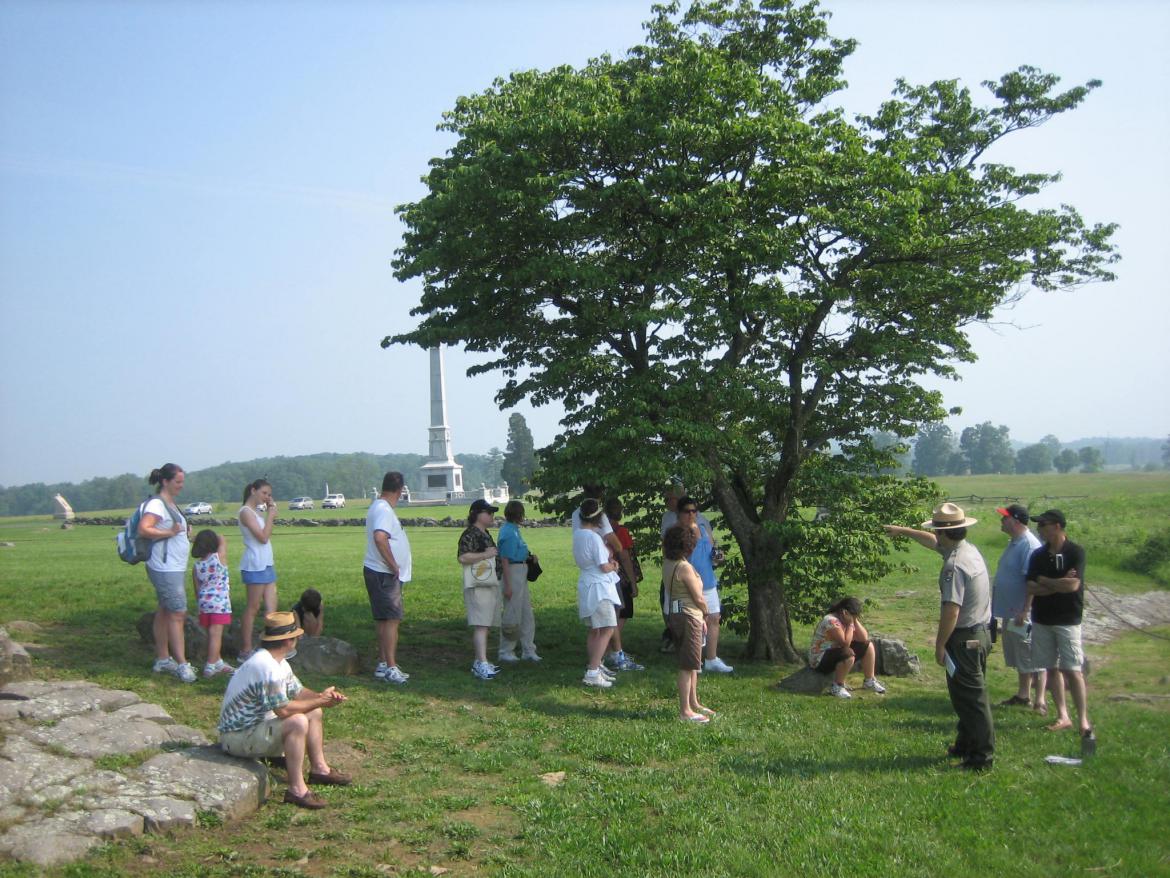 The seasonal rangers have been researching in the library and the reading room the last couple of weeks in preparation for their programs. Here, seasonal Kevin Bowman is leading his group along Cemetery Ridge for “The Third Day: Pickett’s Charge” Walk. The temperature was approximately 81 degrees, and Kevin has done a good job finding some shade for his group. The obelisk monument to the U.S. Regulars is in the background. This view was taken from the northwest facing southeast at approximately 4:15 PM on Friday, June 6, 2008.

The best way to take a tour of Gettysburg National Military Park is the basic two hour tour with a Licensed Battlefield Guide driving your vehicle. If you want more details about the battle, the summer season is beginning, which means the summer seasonals have been hired and more free National Park Service summer programs are offered. The park is offering approximately 27 different programs by rangers, volunteers, and licensed battlefield guides. During the 145th anniversary of the battle (July 1-3, 2008), 11 different programs will be offered. Today the Gettysburg Daily caught up with the “The Third Day: Pickett’s Charge” Walk on Cemetery Ridge near the High Water Mark Monument. 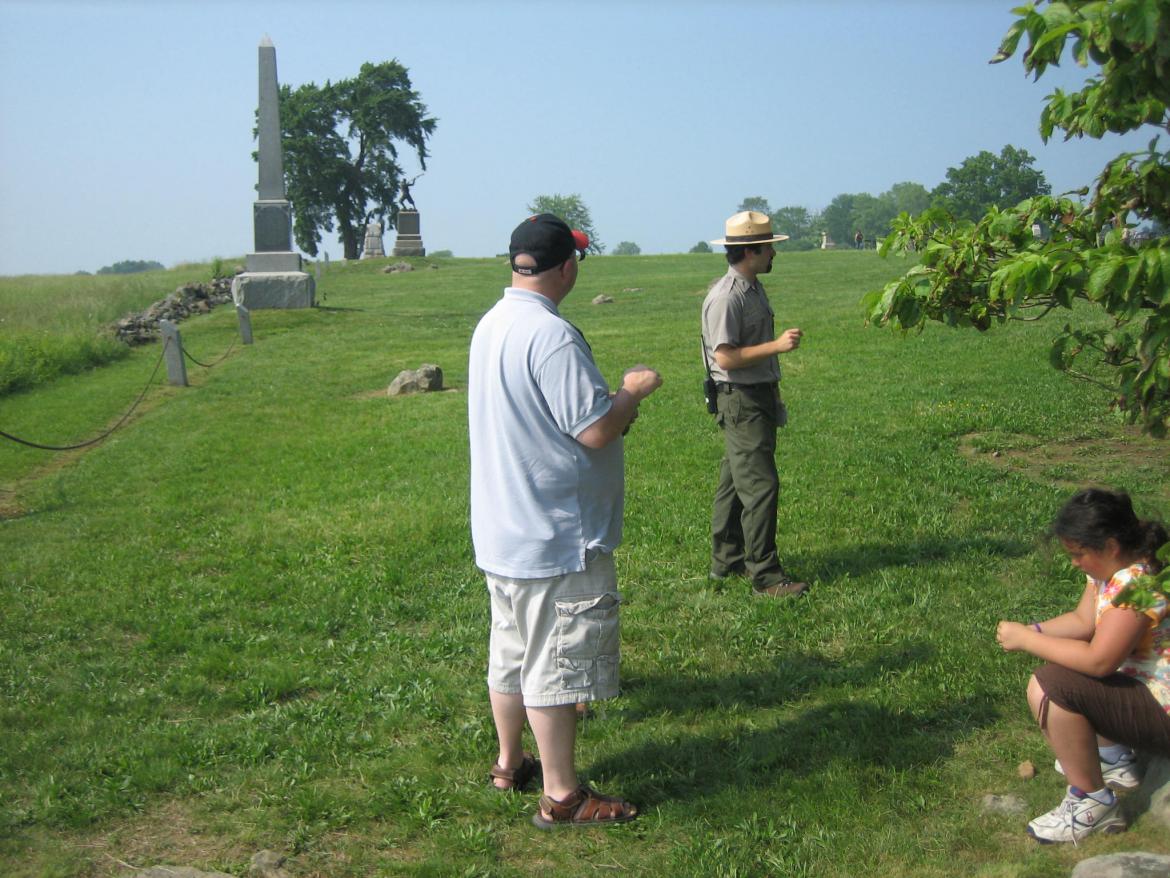 This walk, which begins at 4:00 PM, used to start on the west side of the Cyclorama building. It now begins by the flagpole by the “National Cemetery parking lot” (old Cyclorama parking lot). “The Third Day: Pickett’s Charge” walk does not actually walk Pickett’s Charge. There is a “Pickett’s Charge Battle Walk” program offered on some Wednesdays at 3:30 that takes groups across the fields. It is part of the “Ranger Guided Battle Walks” series. Monuments shown in this view include the 69th Pennsylvania on the left, the 72nd Pennsylvania (soldier with clubbed musket), and the 71st Pennsylvania by the tree growing out of the outer angle of the stone wall. This view was taken from the south facing north at approximately 4:15 PM on Friday, June 6, 2008. 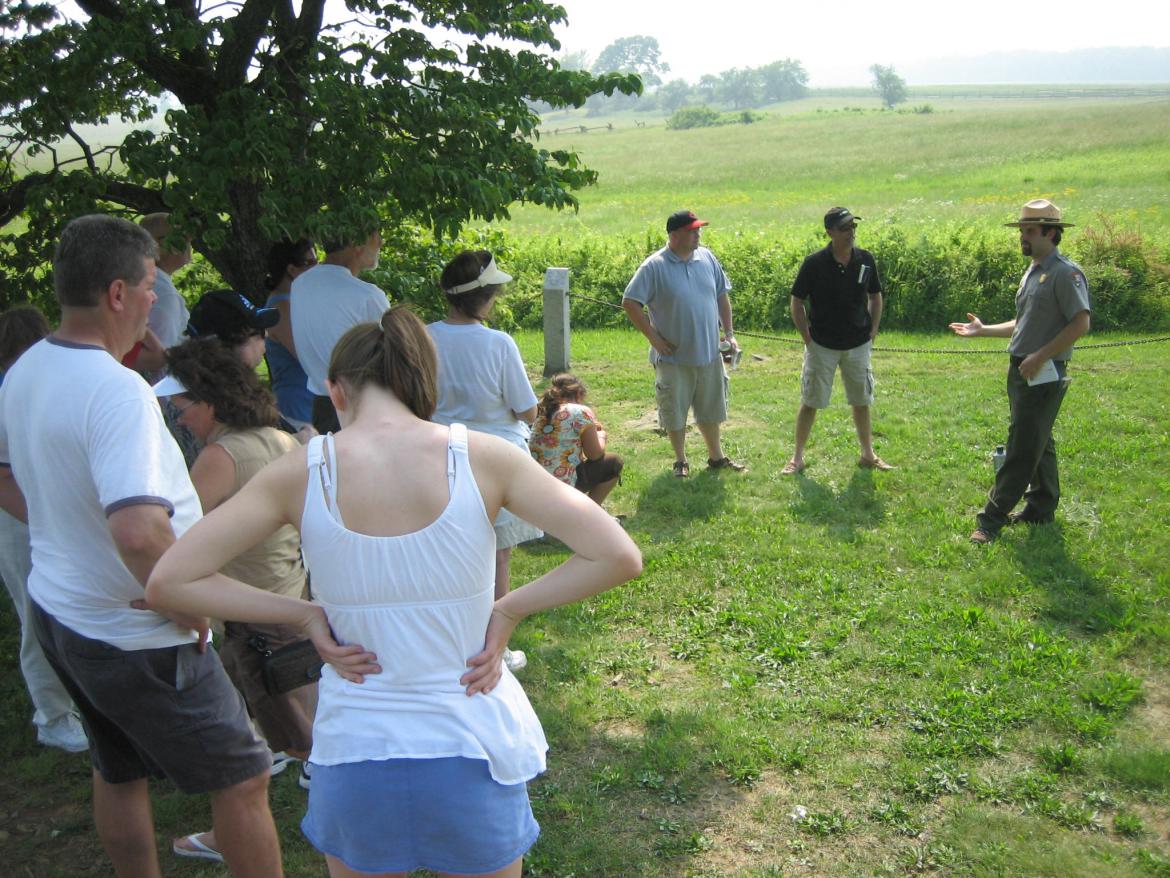 It was a hot, hazy, humid day, and the Appalachian Mountains/South Mountains/Blue Ridge Mountains to the west were not visible. This walk is one of the six programs offered to first time visitors to Gettysburg. Kevin’s group is in the area defended by the 69th Pennsylvania, just west of the Copse/Clump/Group of trees. The Confederates advanced during Pickett’s Charge out of the treeline in the background, and across the fields to this point. This view was taken from the east facing west at approximately 4:15 PM on Friday, June 6, 2008.