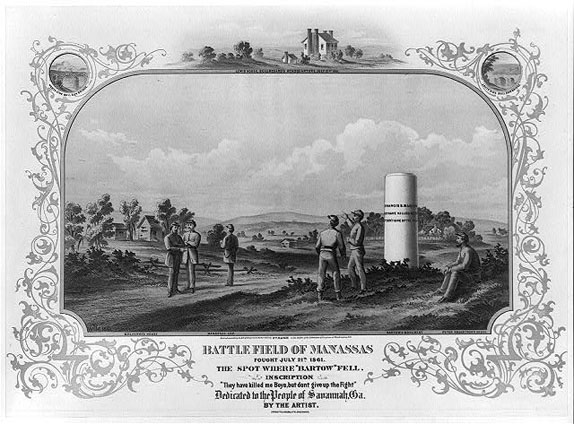 This engraving shows the Henry House in the left background and the Francis Bartow Monument, probably the first Civil War monument, on the right. It was dedicated on September 4, 1861. This image was created oriented to the northwest in 1861 and is courtesy of the Library of Congress.

The Gettysburg Daily decided on Thursday, July 21, 2011 that after finishing their tours at Gettysburg to drive to Manassas. The goal was to stand on the ground on the 150th anniversary of the Battle of First Manassas, to document the scene, and to avoid the crowds.

In the second First Manassas 150th Anniversary post we concentrated on the material around the Henry House on Henry Hill, including tents, equipment, and artillery pieces.

In the third First Manassas 150th Anniversary post we feature the Stone House or Matthews’ House. We were fortunate to have been allowed in the house that evening.

In the fourth First Manassas 150th Anniversary post we walk back up Henry Hill towards the foundation of the James Robinson House Wade Hampton’s South Carolinians made a stand in Robinson’s Lane.

In the fifth First Manassas 150th Anniversary post we walked from the James Robinson House to Thomas J. “Stonewall” Jackson’s artillery line at the edge of the woods on Henry Hill.

In today’s First Manassas 150th Anniversary post we found the base to the first monument to Colonel Francis Bartow. Dedicated on September 4, 1861, Bartow’s monument was probably the first Civil War monument. 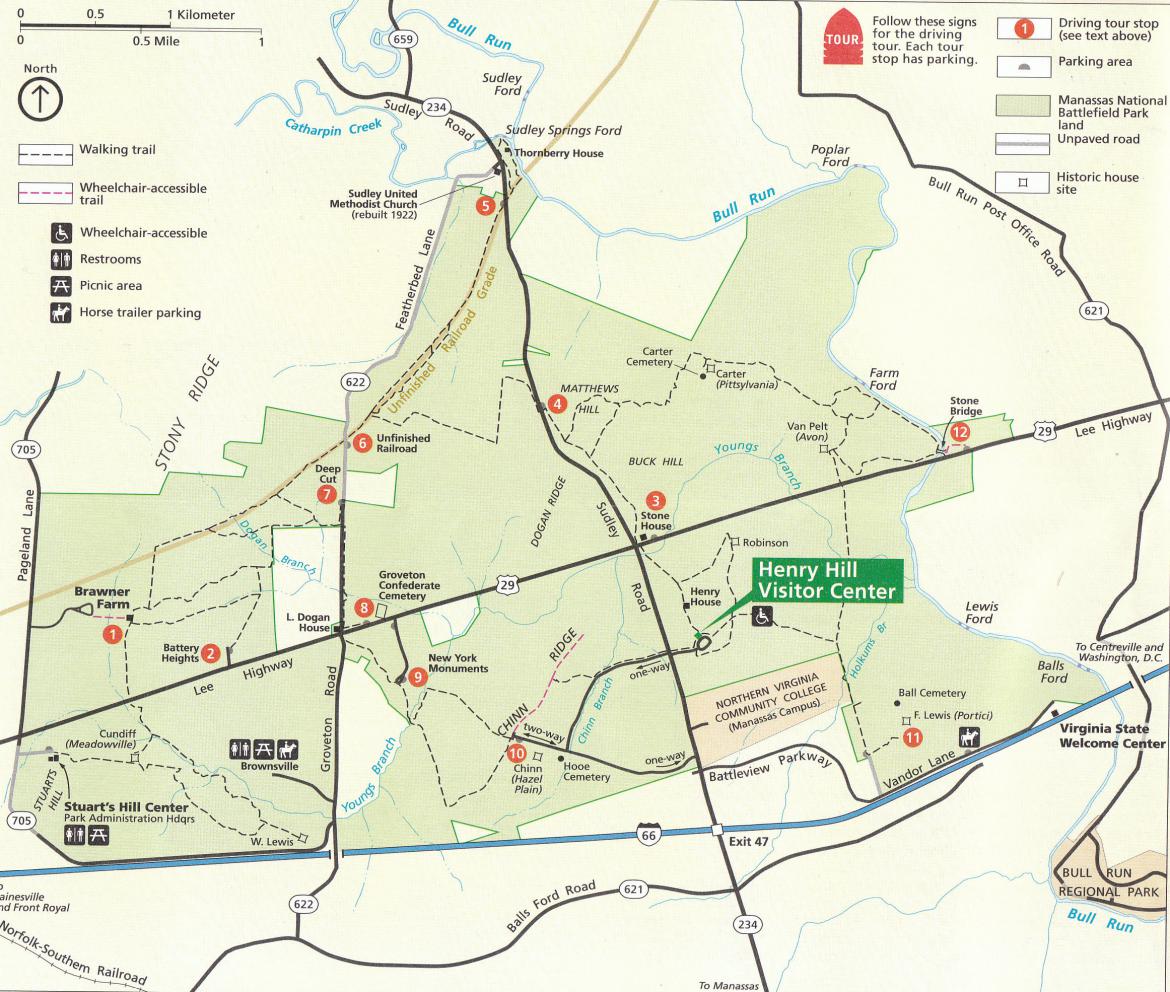 This is the National Park Service Map of Manassas National Battlefield. Most of the map shows areas concerning the Second Battle of Manassas, which was fought from August 28-30, 1862. Today, we are concerned about the First Battle of Manassas, which was fought on July 21, 1861. This final stages of the battle centered around the Henry Hill area, shown in the bottom right of the map. This map was scanned facing north at approximately 11:00 AM on Friday, July 22, 2011. 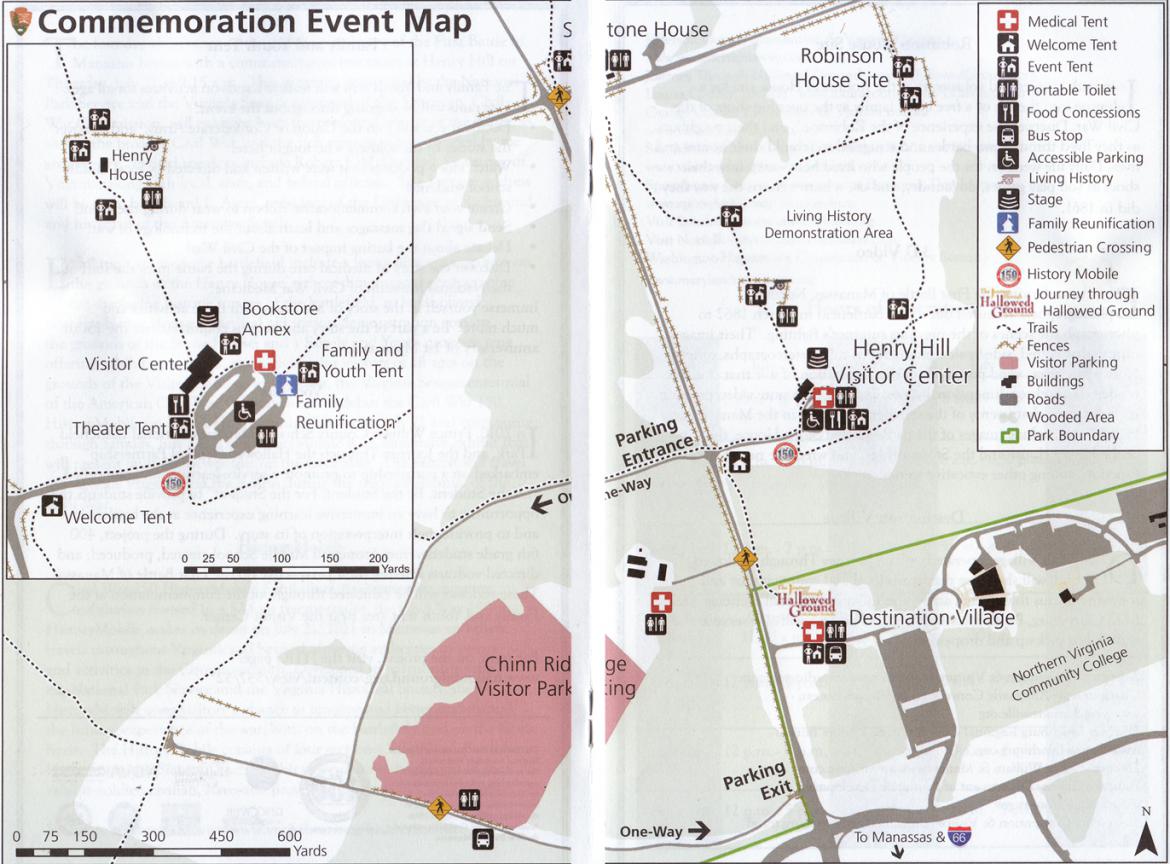 This is the National Park Service Map of the area around Henry Hill for the 150th anniversary period. Large tents, tractor trailers, Coca Cola trucks, Pepsi trucks, food stands, etc… dot the hill of the first major land battle of the American Civil War. So if you had thoughts of going to the battlefield and to be transported back in time 150 years ago, that was difficult. This map was scanned facing north at approximately 11:00 AM on Friday, July 22, 2011.

In 1936, the year of the 75th anniversary of the Battle of First Manassas, this monument to Francis S. Bartow was dedicated by the Georgia Division of the United Daughters of the Confederacy. The monument to Stonewall Jackson, in the background, was dedicated in 1940.This view was taken facing southeast at approximately 8:30 PM on Thursday, July 21, 2011.

Thomas J. “Stonewall” Jackson’s artillery line is marked by the cannon at the edge of the woods in the background. This view was taken facing south at approximately 8:30 PM on Thursday, July 21, 2011. 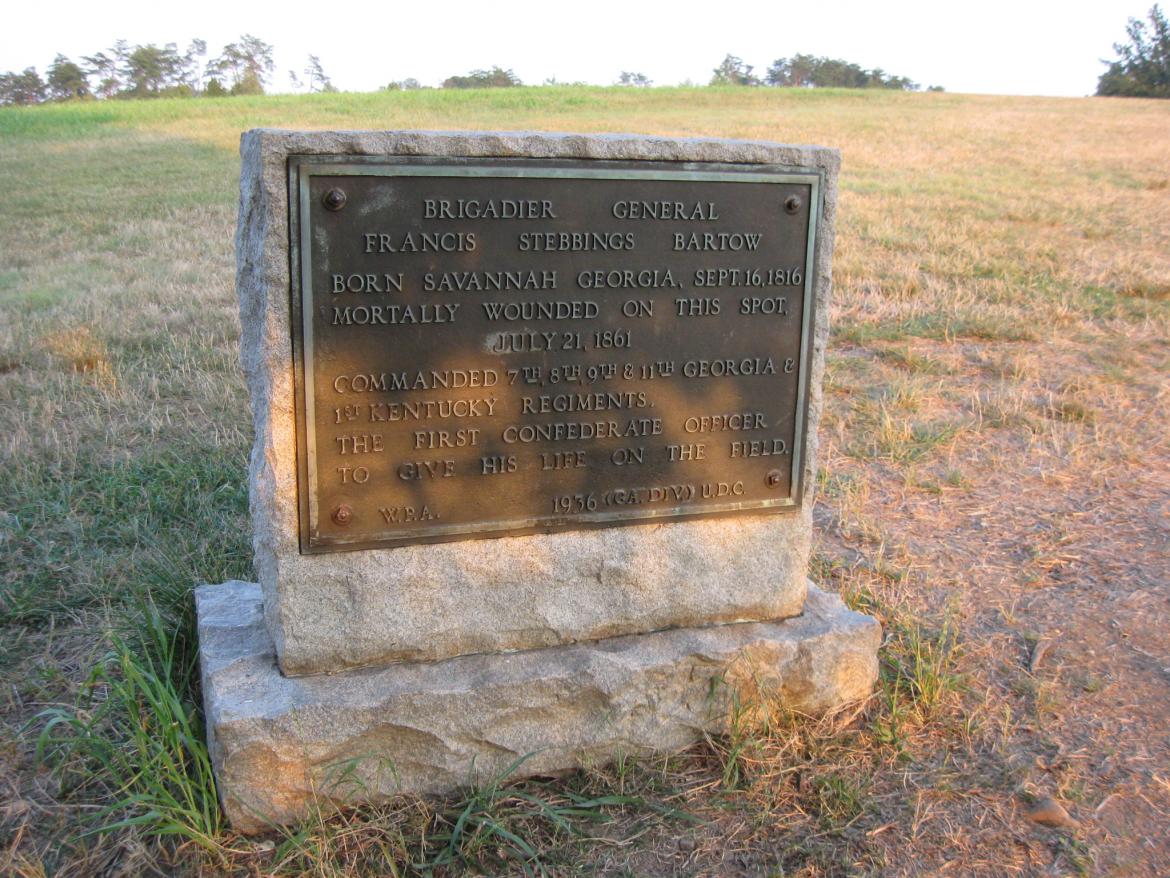 Bartow with his Georgia regiments had to fall back from Matthews Hill/Buck Hill towards the area marked by the woods in the background around noon on July 21, 1861. There, he asked General Beauregard, “What shall now be done? Tell me, and if human efforts can avail, I will do it.” Waving probably at Griffin’s Union Battery on Henry Hill, Beauregard replied, “That battery should be silenced.” Bartow gathered what was left of the 7th Georgia Regiment and launched another attack. Bartow’s horse was shot out from under him and a bullet wounded him slightly. Nonetheless, he grabbed another horse and continued the attack. This view was taken facing east at approximately 8:30 PM on Thursday, July 21, 2011. 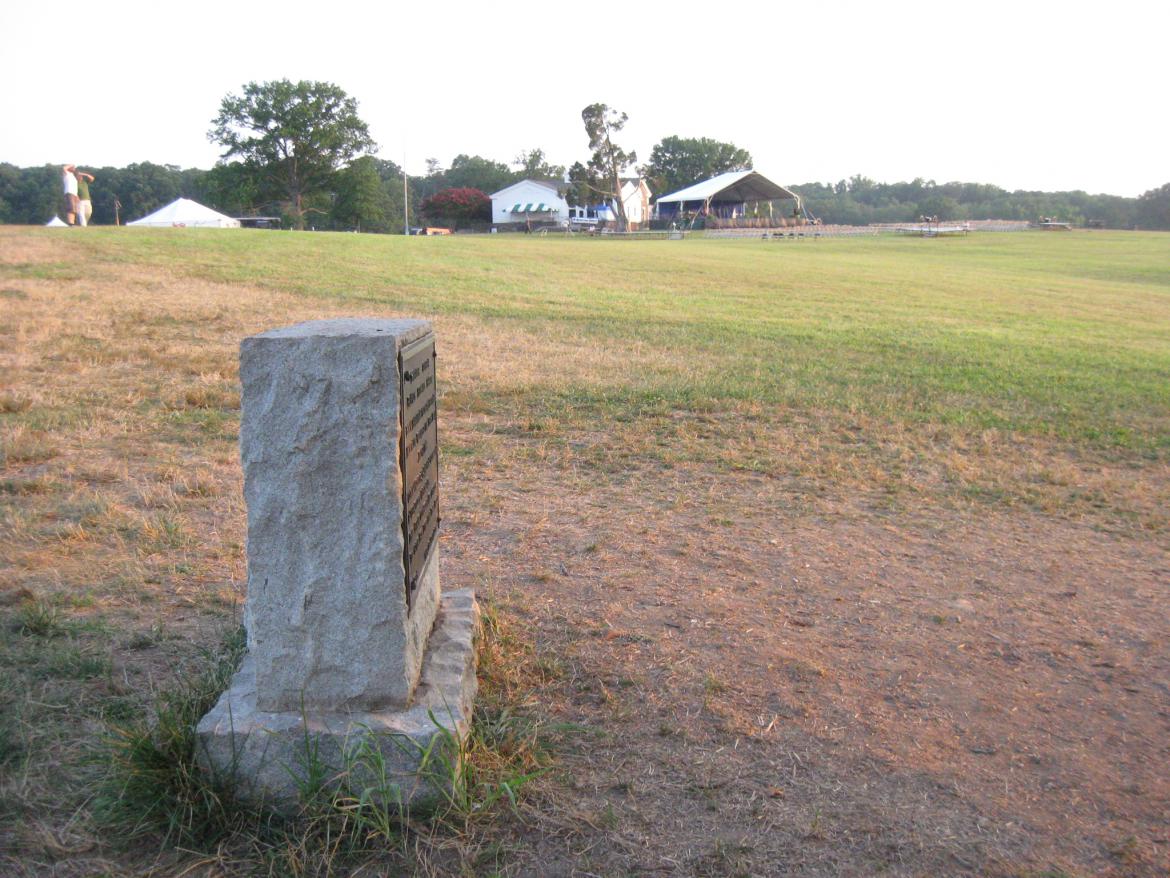 The Visitors Center is in the background. At one point, he encouraged his troops to follow him toward the enemy by cheering “Boys, follow me!” and waving his cap frantically over his head. At that moment, another projectile hit his chest, fatally lodging in his heart. Some of his soldiers gathered around him, witnessing his last words: “Boys, they have killed me, but never give up the field.” Lying on the ground and wrapped in the arms of the Colonel of the 7th Georgia, Lucius Gartrell, Francis Bartow died. This view was taken facing south at approximately 8:30 PM on Thursday, July 21, 2011. 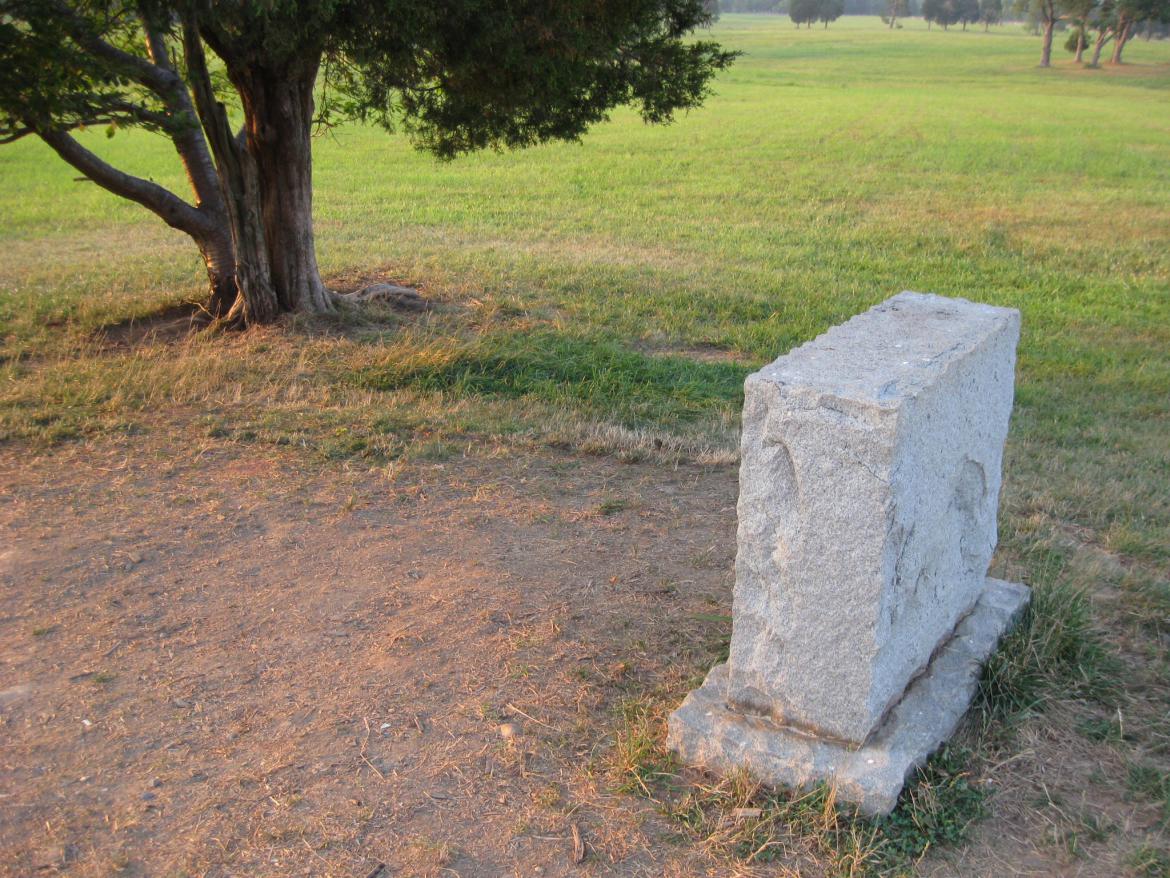 This is not the first monument erected at Manassas to Bartow. The first monument was dedicated on September 4, 1861, and its base is still located on the battlefield. It is in the area of the cedar tree on the left. This view was taken facing northwest at approximately 8:30 PM on Thursday, July 21, 2011. 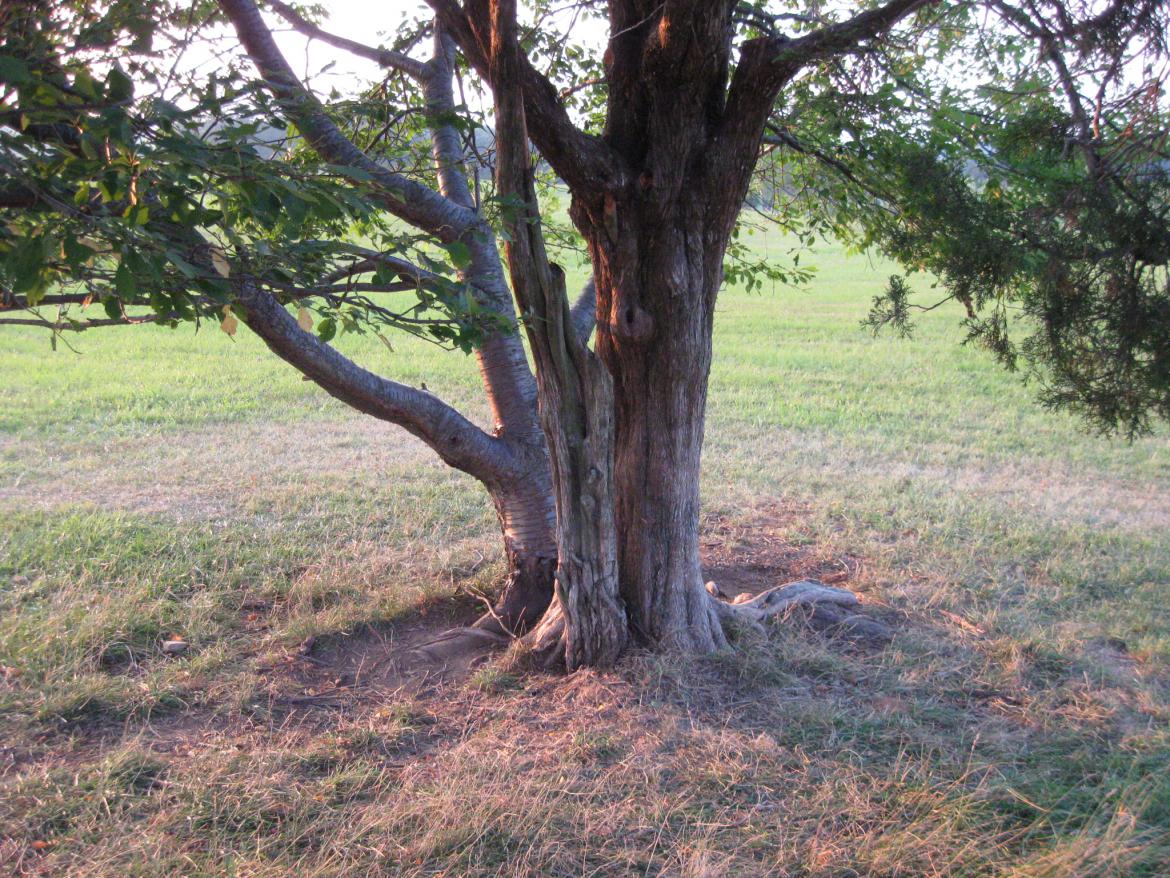 The 1936 monument was erected in part to replace the monument dedicated here in 1861. This view was taken facing northwest at approximately 8:30 PM on Thursday, July 21, 2011.

Here is the base of the monument within the tree. The monument itself is shown in our first picture of this post. The correspondent of the Richmond Dispatch wrote the following article about the dedication of the monument on September 5, 1861. It was published on September 10, 1861 on page one, columns four and five: “In a previous letter I spoke of the ceremony of raising a monument upon the spot where the noble Bartow fell while leading on his men in the battle of the 21st. The members of the 8th Georgia Regiment, desiring to erect some memorial on the spot, purchased a shaft which was placed in position yesterday evening. It was reported that General Toombs and Vice-President Stephens would both speak upon the occasion, and consequently a large crowd of soldiers walked to the field, some from a distance of six and eight miles. When I arrived, about one thousand were present, and others were pouring in from every quarter. Groups of soldiers were roaming about in every direction over the battle-field, gathering relics of the fight and gazing at every object of interest connected with it. The cen- tre of attraction was the Evans house, which was so riddled with shot, and which now stands a perfect ruin, with holes marking the passage of cannon shot, and with bullets still imbedded in its wall. Throughout the day the house was crowded by curiosity-hunters, who carried away many pieces of the doors and windows to preserve as relics.” This view was taken facing southeast at approximately 8:30 PM on Thursday, July 21, 2011.

“After waiting until near 2 o’clock it was found that Mr. Stephens had gone to Richmond with his brother, and that Mr. Toombs was too ill to be present. The services were delayed no longer, and the soldiers were ordered to form in rank to proceed to the spot. The 7th, 6th and 9th Georgia, and the Kentucky regiment, under Col. Taylor, formed in a square around the prostrate shaft, with the officers and civilians in the centre. A few ladies were present, and among them Mrs. Braneb, mother of Adjutant Branch, of the 8th Georgia, who was also killed in the battle of Stone Bridge. The day was beautiful, and the scenery around perfectly charming. Standing upon an eminence, the whole battle-field was spread out before us, with its patches of wood land and desolated field. Beyond were thriving farms and hillside covered with corn, while in the distance the Blue Ridge stood out boldly against the sky. The picture was indeed beautiful and worthy the pencil of a Claude. But a few yards away was the small field which proved the mausoleum of so many New York Zouaves, and close by the half-destroyed Evans house [Gettysburg Daily Editor’s note: Henry House?]. But little change has taken place since the day of the battle, except that which Nature has made. Little mounds mark the grave of both friend and foe, and the green grass is now springing from each. The altheas by the old house once more look fresh and green, and roses again bloom where the dead lay in heaps.” This view was taken facing southwest at approximately 8:30 PM on Thursday, July 21, 2011. 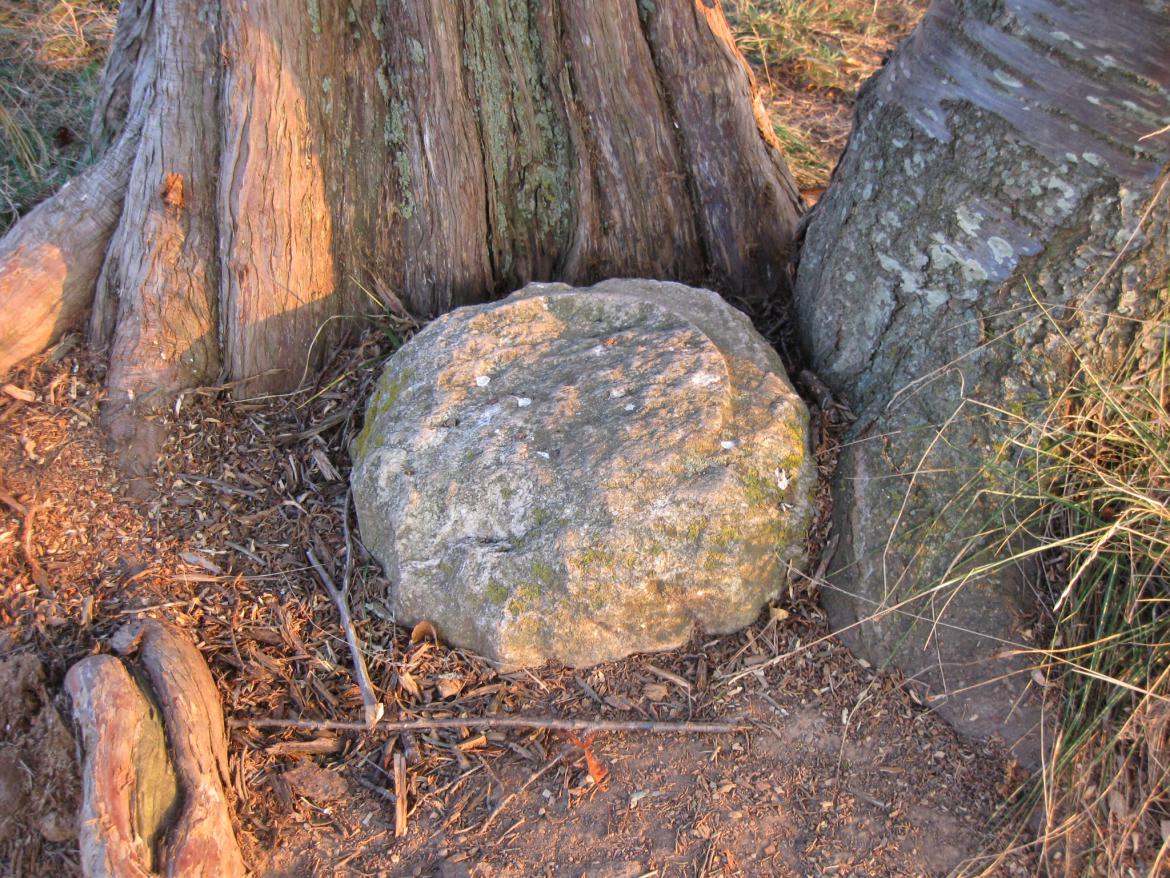 “The brass band, belonging to the Second Georgia Regiment, was present, and at a signal the colors of the Eighth Georgia, perforated by many a bullet, were brought in front. The flag was saluted by each regiment in turn, and then, with an air from the band, Rev. Mr. Jones, chaplain of the 8th, made a fervent and touching prayer, after which the Hon. Mr. Semmes, Attorney-General of Louisiana, made a short speech to the assembly.” The speech by Semmes, which we are not giving in full here, was followed by a speech by Major Cooper of the 8th Georgia. Cooper’s speech was not published. While the speeches were being made, action at the Battle of Munson’s Hill was heard: “heavy firing was heard in the direction of the Potomac, which lasted some two hours. Only the larger guns were distinguishable, the dull, heavy report of which, reverberating over the hills, came to our ears like the distant sound of thunder. It was then believed a general engagement had taken place; but the firing soon ceased, convincing us it was but a skirmish.” This view was taken facing southeast at approximately 8:30 PM on Thursday, July 21, 2011. 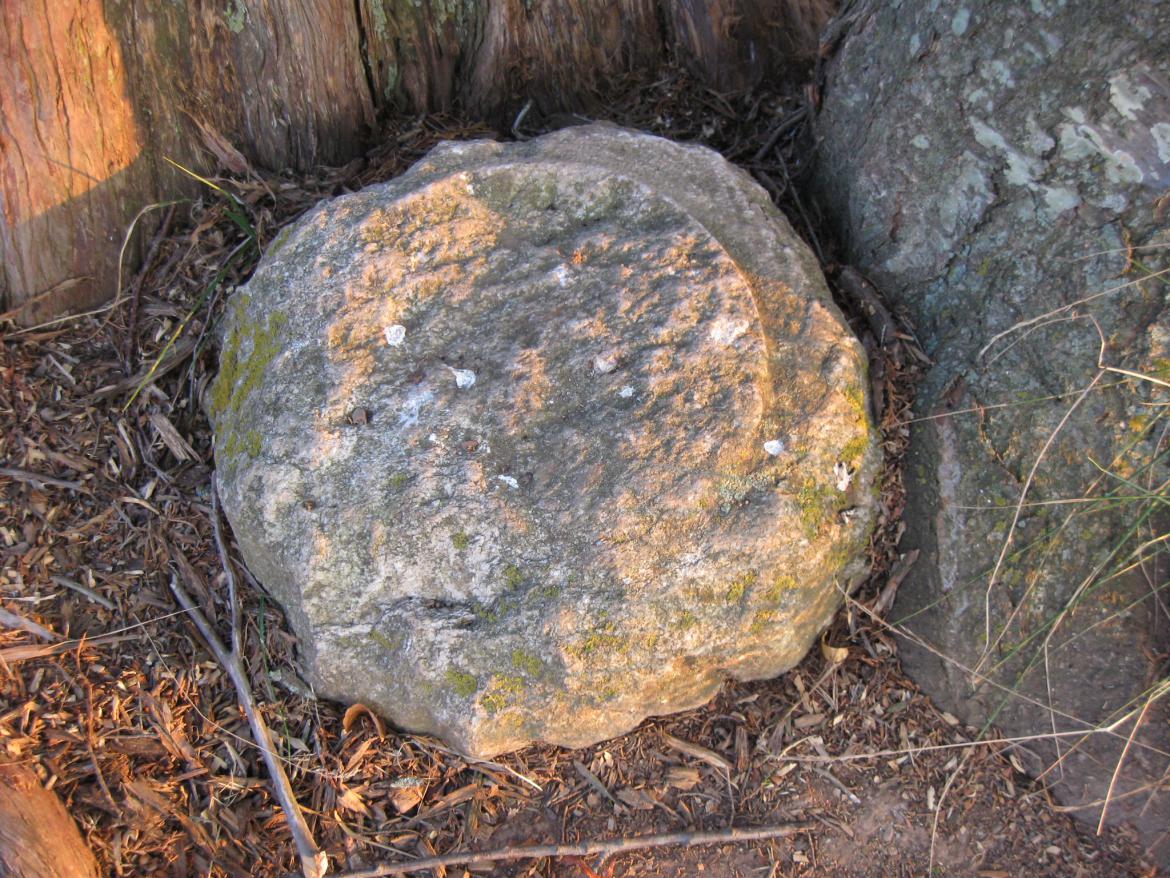 “After the stone was raised in position, each officer present threw a little earth upon the base and then retired. They were followed by Mrs. Branch, Mrs. and Miss Semmes, and then by the privates. This concluded the ceremonies, and preceded by the excellent band, the regiments marched again to their various camps.” This view was taken facing south at approximately 8:30 PM on Thursday, July 21, 2011.

“I have thus given you a hasty sketch of the day’s proceedings, but cannot do justice to the interesting occasion, or say half I wish to in memory of the noble man who fell in defence of his country on the spot where this plain white marble shaft is standing, bearing his dying words.” This view was taken facing west at approximately 8:30 PM on Thursday, July 21, 2011.

“I regret to see that a slight error has been made in the inscription, which will hand down in history a much less forcible sentence than that really spoken by Bartow. He said, ‘They have killed me, boys, but never give it up.’ This inscription reads, ‘Never give up the field.'” This image was created oriented to the northwest in 1861 and is courtesy of the Library of Congress. 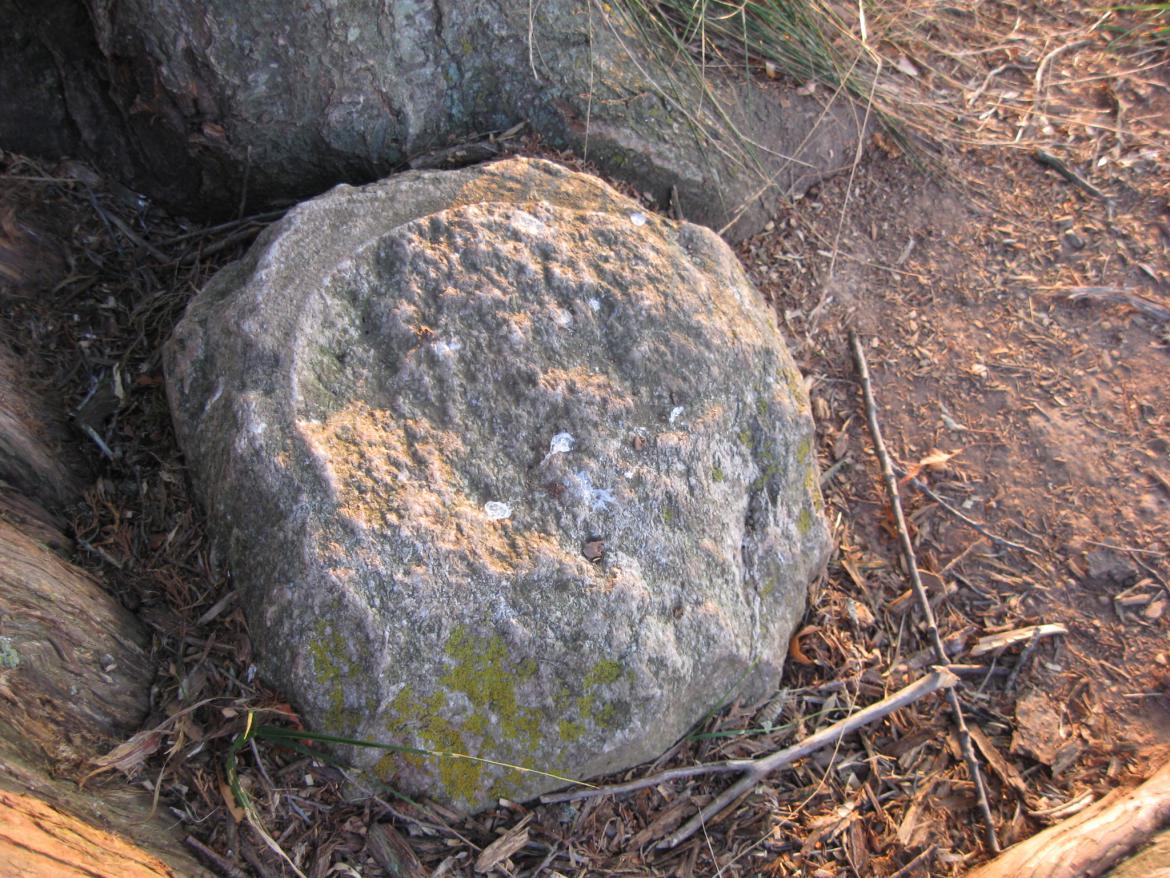 Today there is not good documentation of what happened to the stone. Some sources say that Union soldiers vandalized the stone when they reoccupied the area in 1862. At least one of the Manassas National Battlefield Historians (John Hennessy for instance) believe that the Confederates took the stone down before they left this area in 1862 so the Union soldiers wouldn’t destroy it. It may have been lost. This view was taken facing southwest at approximately 8:30 PM on Thursday, July 21, 2011. 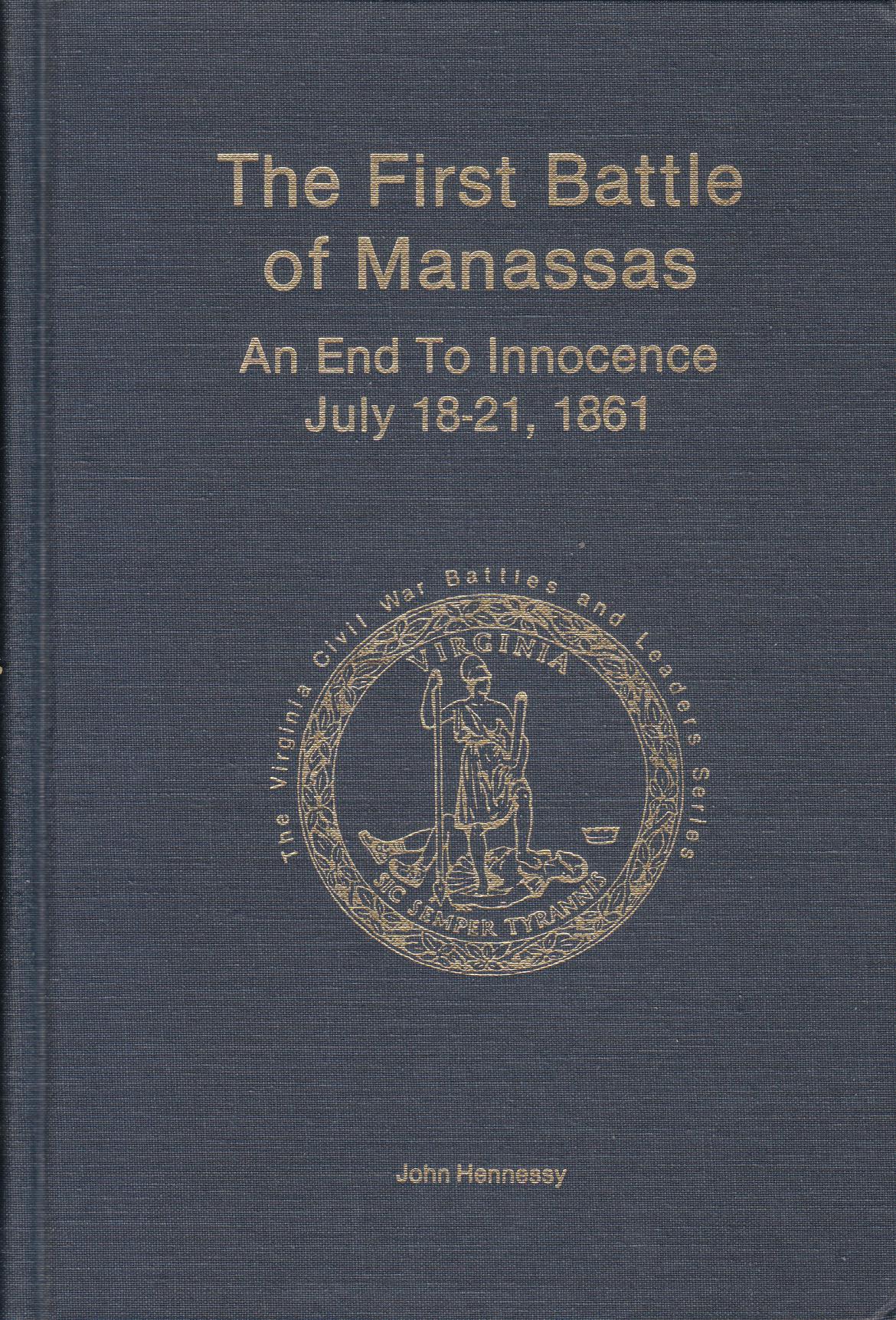 We feel the best book on the Battle of First Manassas is John Hennessy’s book, First Battle of Manassas: An End to Innocence.

It is part of the Virginia Civil War Battles and Leaders Series by H.E. Howard. This image was scanned facing north at approximately 7:40 PM on Sunday, August 7, 2011.