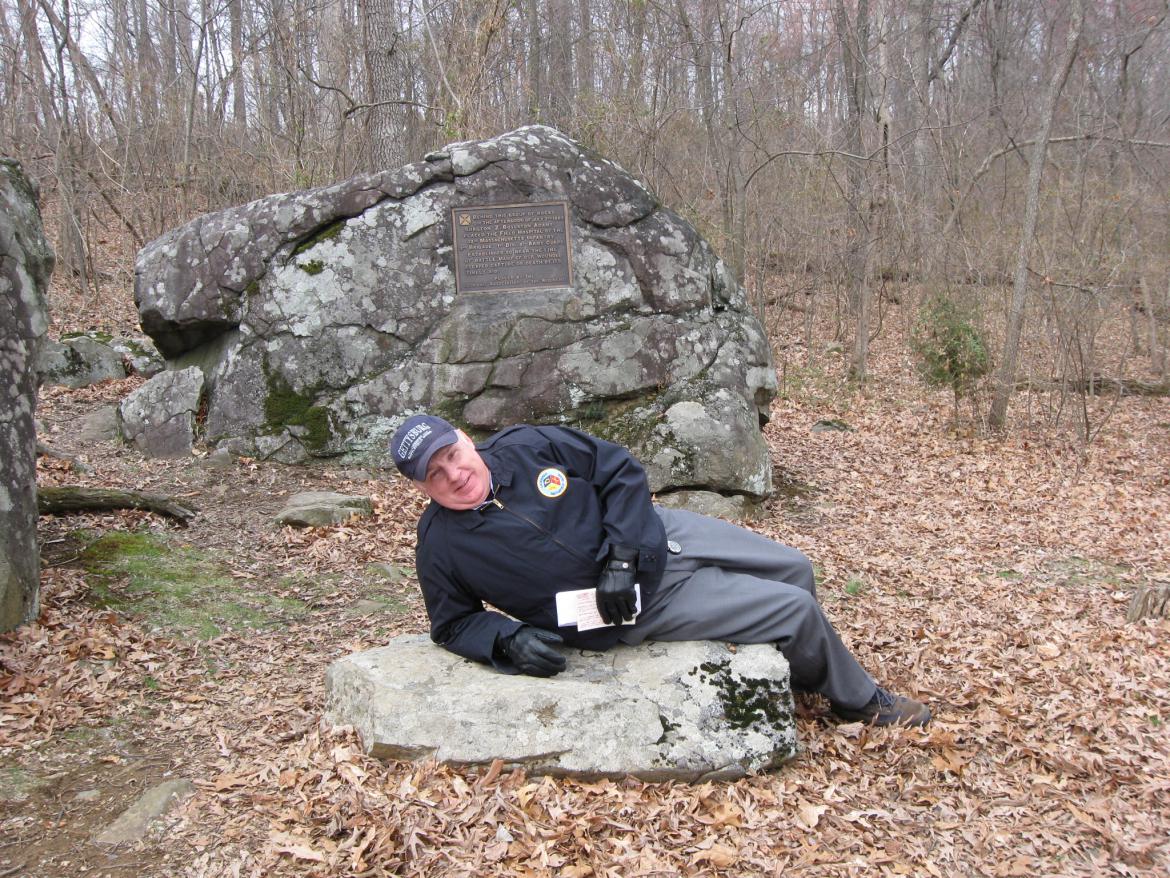 Gettysburg Licensed Battlefield Guide Fred Hawthorne is relaxing?/posing? on a rock in the area where the 32nd Massachusetts had established an first aid station on July 2, 1863. This view was taken facing northwest at approximately 4:45 PM on Friday, March 25, 2011.

In today’s 140 Places Every Guide Should Know post, Gettysburg Licensed Battlefield Guide Fred Hawthorne shows us the location of the first aid station of the 32nd Massachusetts, the oldest marker outside of the National Cemetery, and the Semmes Rocks. 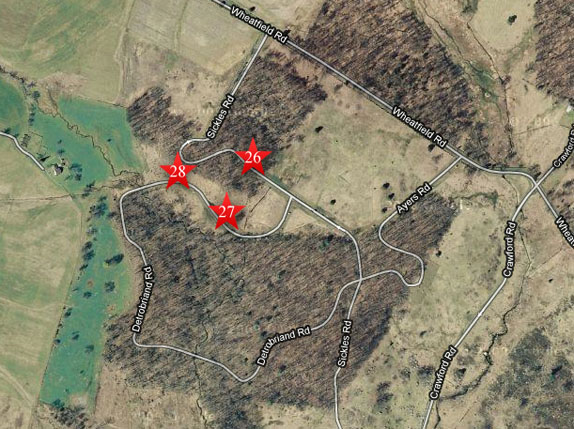 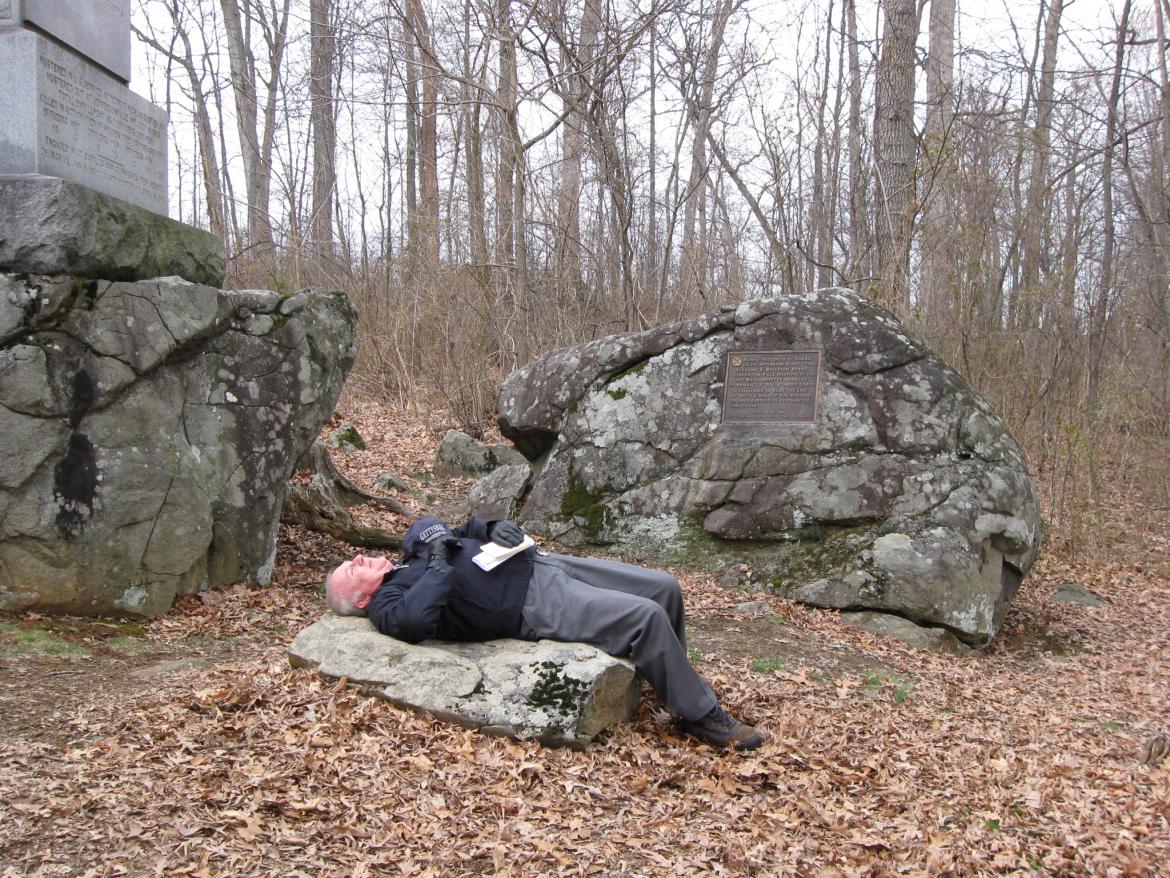 The rock on which Fred is resting was used as an operating table by Surgeon Zabdiel Boylston Adams (1829-1902) of the 32nd Massachusetts Infantry Regiment. This view was taken facing northwest at approximately 4:45 PM on Friday, March 25, 2011.
In Video #26 (Videos #1-25 were shown in our previous 140 Places Posts) Gettysburg Licensed Battlefield Guide Fred Hawthorne in the area where Surgeon Z. Boylston Adams established a field hospital for the 32nd Massachusetts. This view was taken facing southeast to south to southeast to south to north to northwest at approximately 4:45 PM on Friday, March 25, 2011. 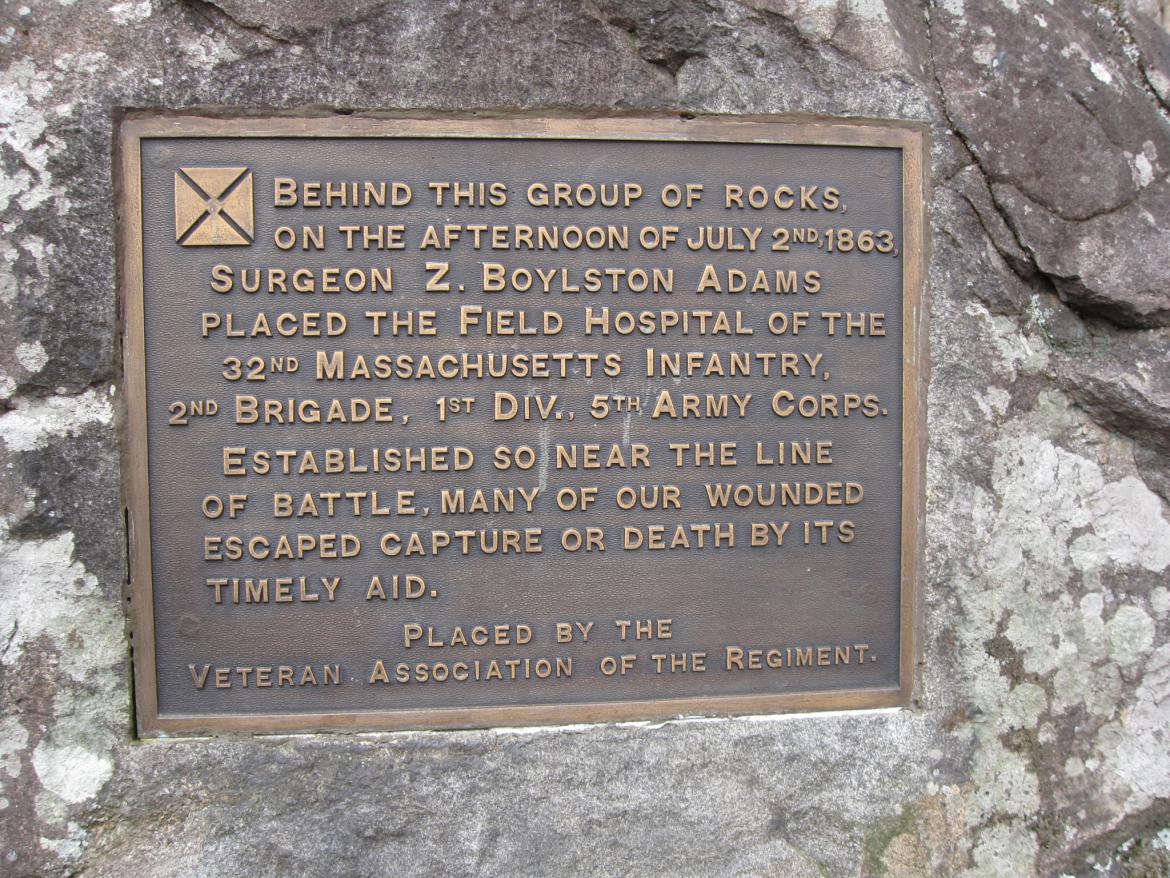 A closer view of the plaque marking this location as the site of the field hospital. This view was taken facing northwest at approximately 4:45 PM on Friday, March 25, 2011. 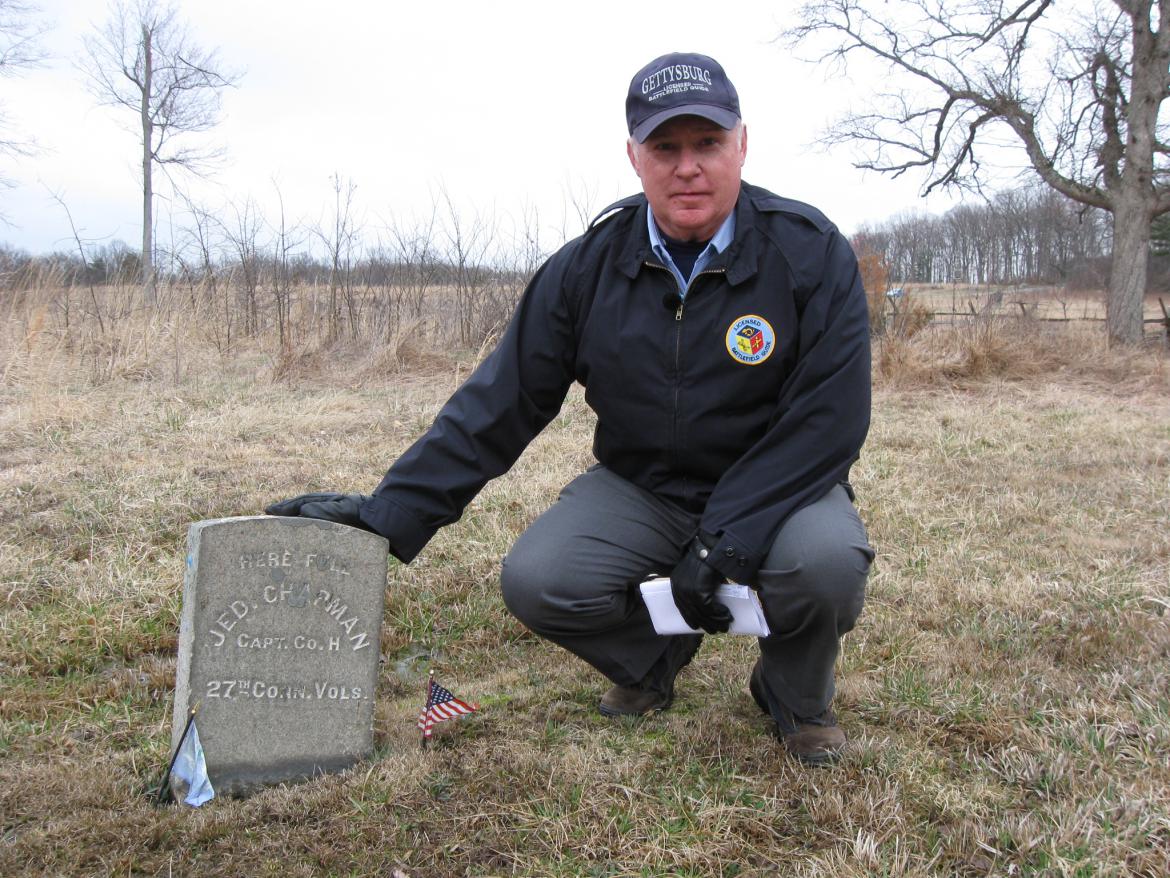 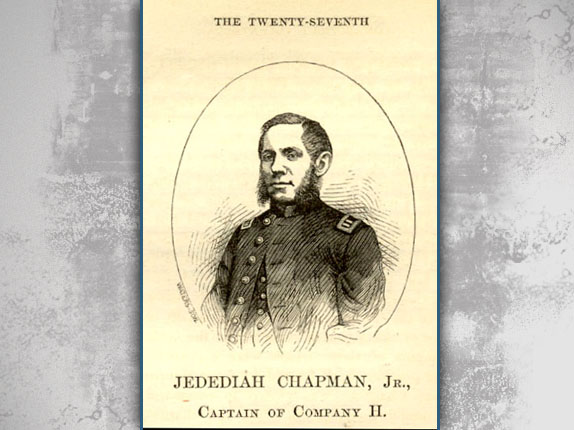 First Lieutenant Jedediah Chapman, because of “protracted sickness” missed the Battle of Chancellorsville in May, 1863 when the 27th Connecticut suffered tremendous casualties, mostly by having their men captured. Only two companies of the regiment remained in the field, along with a few remnants from other companies that were not captured. “These scattering portions were formed into one company, and Lieutenant Chapman was placed in command. His peculiar qualifications of discipline and character contributed much to their unity and effectiveness during the succeeding campaign of Gettysburg; and at their head he fell on the second of July, 1863. His commission as Captain of Company H, dated May thirteenth, 1863, had been already issued and forwarded; but he did not live to know of this well-deserved honor.” This image, circa 1866, is from The “Twenty-Seventh” A Regimental History. 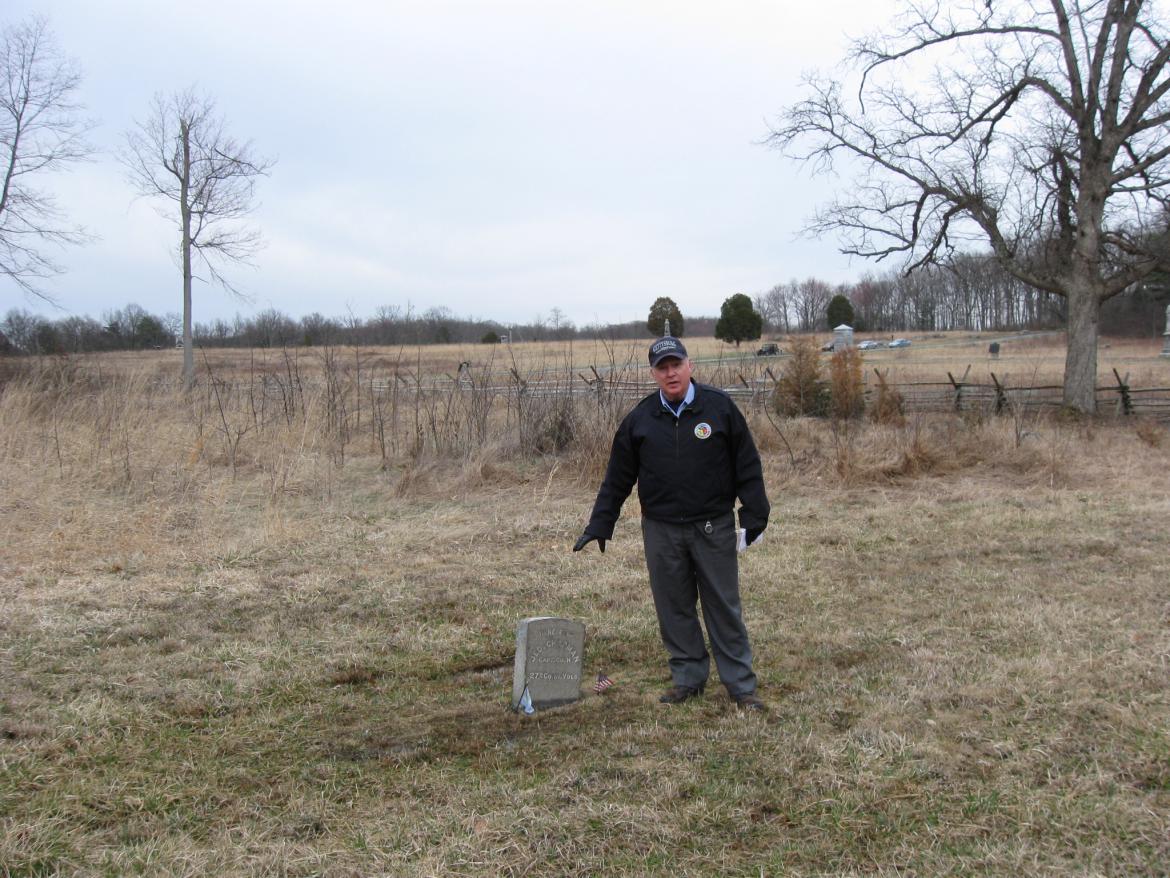 To give an idea of how far it was for the 27th Connecticut to cross the open Wheatfield to the area where First Lieutenant/Captain Chapman was killed, look above the Chapman stone to the crest of the ridge in the Wheatfield. The smaller gray monument to the right of the green tree is to the 61st New York Infantry Regiment. The taller monument with a shaft and an eagle on top (okay, you’ll really have to blow it up to see those details) is the monument to the 27th Connecticut which was placed on the battlefield in 1885. This view was taken facing northeast at approximately 5:00 PM on Friday, March 25, 2011. 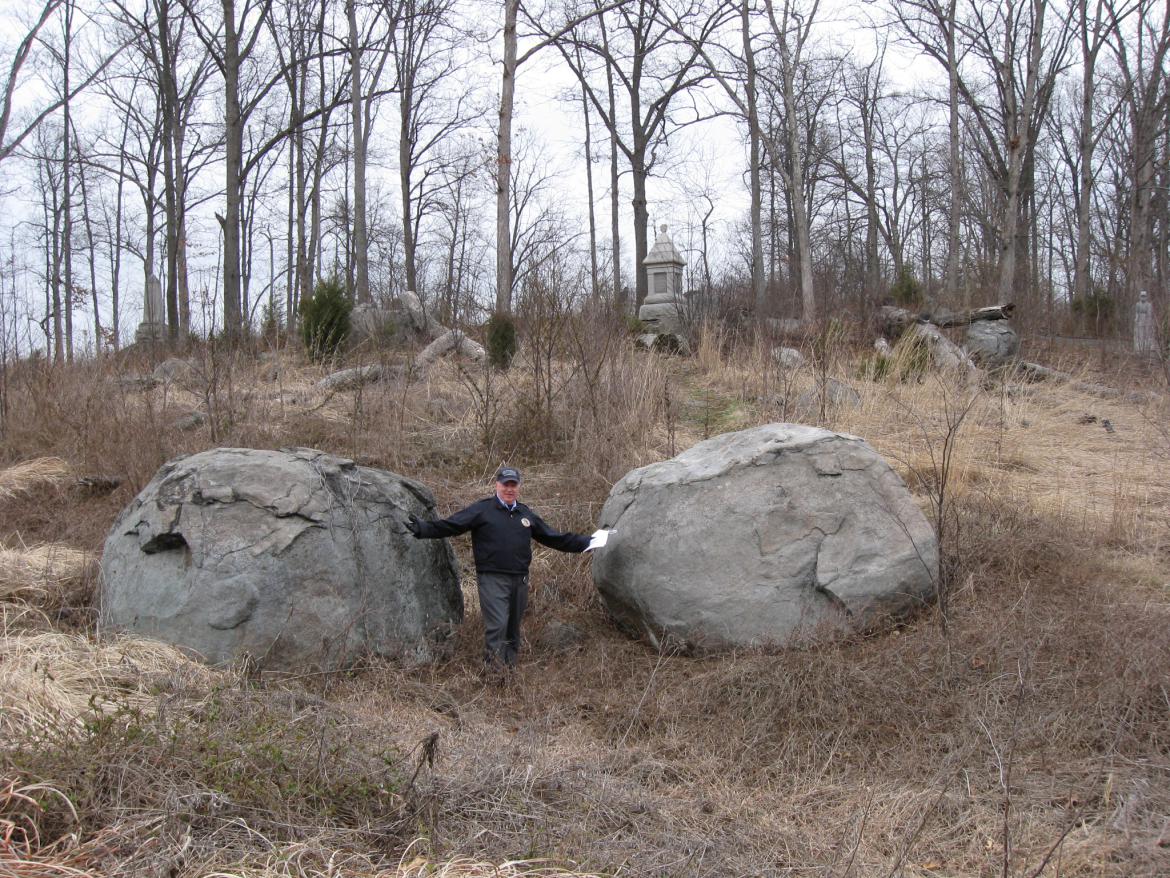 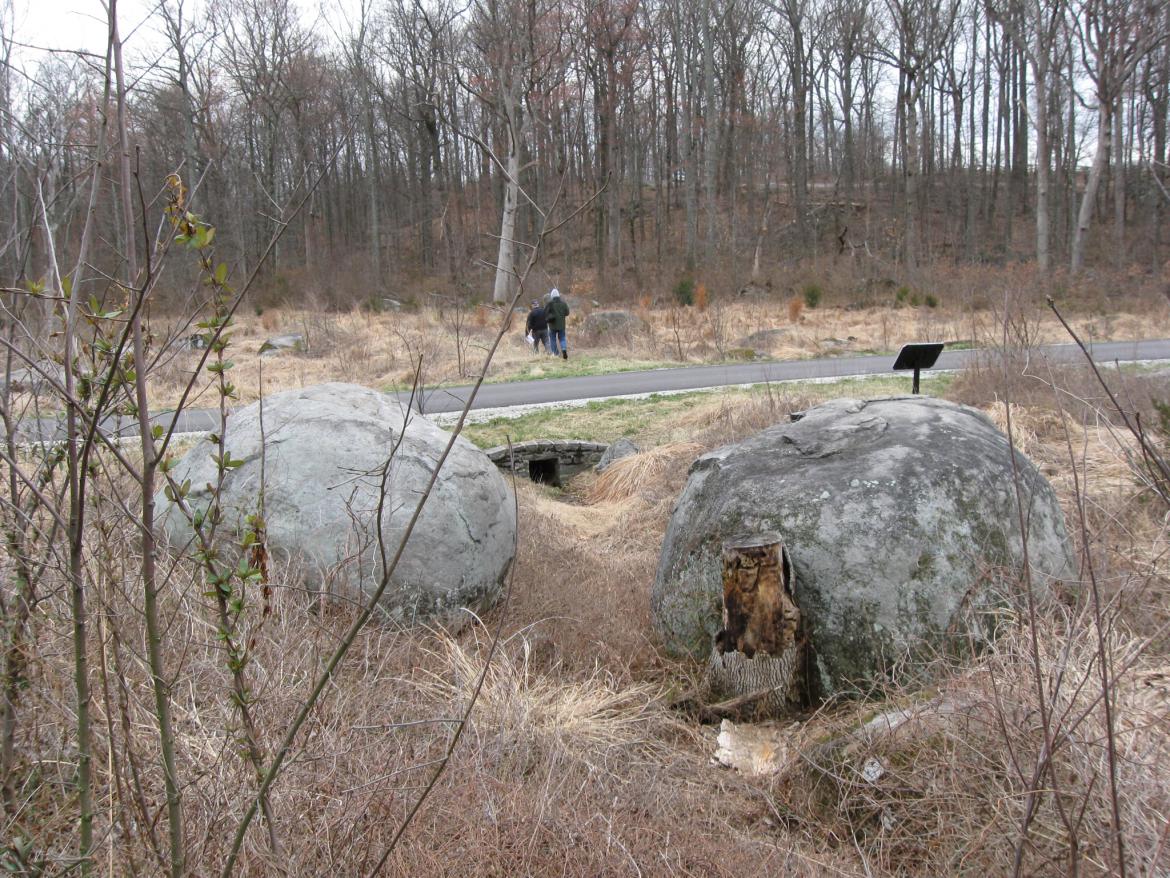 A view of the Semmes Rocks from the Stony Hill. Fred Hawthorne is walking down the old trolley bed/trail to set up for a video we will show in our next post. In the ground ahead of them was the 9th Georgia Infantry. Captain George Hillyer (1835-1927) of the 9th Georgia claimed that Semmes was mortally wounded at these rocks in the foreground. This view was taken facing southeast at approximately 4:45 PM on Friday, March 25, 2011. 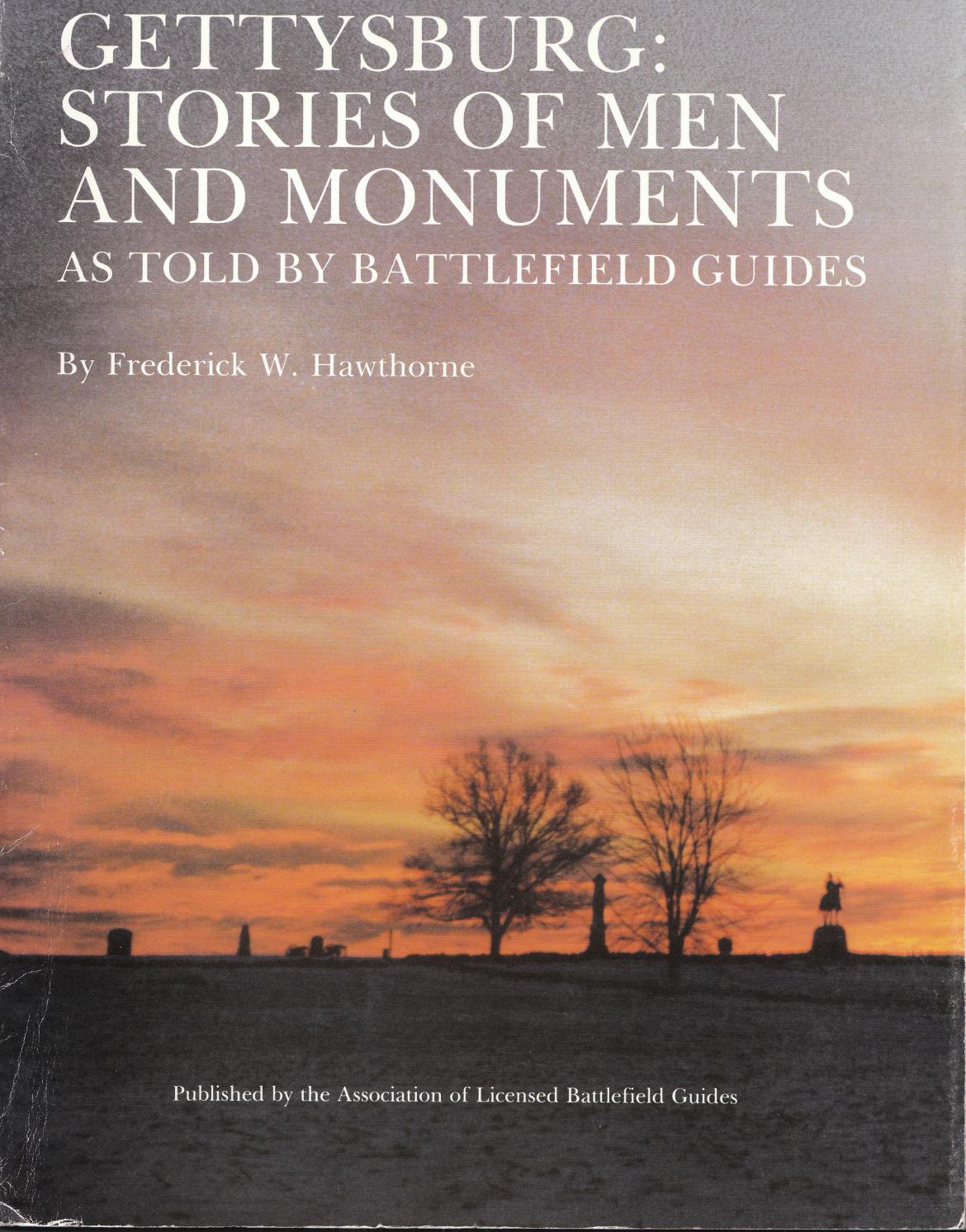