The Third United States Infantry Regiment charged from Little Round Top (background) on the afternoon of July 2, 1863 towards the position where there monument is located. In the afternoon when they had to retreat back to Little Round Top, Gibb’s Ohio Battery, on the north slope of Little Round Top, waved their hats telling the regulars to drop to the ground. The battery then fired canister at the Confederates pursuing the regulars. This view was taken from the west facing east at approximately 4:30 PM on Tuesday, May 13, 2008.

The Third United States Infantry Regiment, also known as “The Old Guard,” is known today for the ceremonial duties it performs at military funerals, Presidential ceremonies, and guarding the Tomb of the Unknown Soldier at Arlington National Cemetery. This is the oldest unit in the United States Army. It was organized as the First American Regiment in 1784. After the War of 1812, it was consolidated with other regiments to form the Third U.S. Infantry, based on the seniority of the then regimental commanders. The Battle of Gettysburg was not the unit’s final moment.

When the Third United States came to Gettysburg, it was commanded by a Captain, and consisted of 300 men. Six men be be killed in at Gettysburg, 66 were wounded, and one was captured/missing for 73 total casualties, or 24.3%. This view was taken from the south facing north at approximately 4:30 PM on Tuesday, May 13, 2008.

The Third, a unit of Hannibal Day’s First Brigade of Ayre’s Second Division of the Fifth Corps was in reserve in this area while the other regular brigade under Sidney Burbank was outflanked by Confederates in the Wheatfield on the other side of these woods. As Burbank’s men retreated, Day’s men left with them back to the Plum Run Valley, and eventually to Little Round Top. So their casualties were mostly as they were in reserve, or were retreating. This view was taken from the east facing west at approximately 4:30 PM on Tuesday, May 13, 2008.

Confederates at Devil’s Den (the high ground to the right background of the monument) inflicted casualties on the regulars while they were in reserve in this position. This view was taken from the north facing south at approximately 4:30 PM on Tuesday, May 13, 2008. 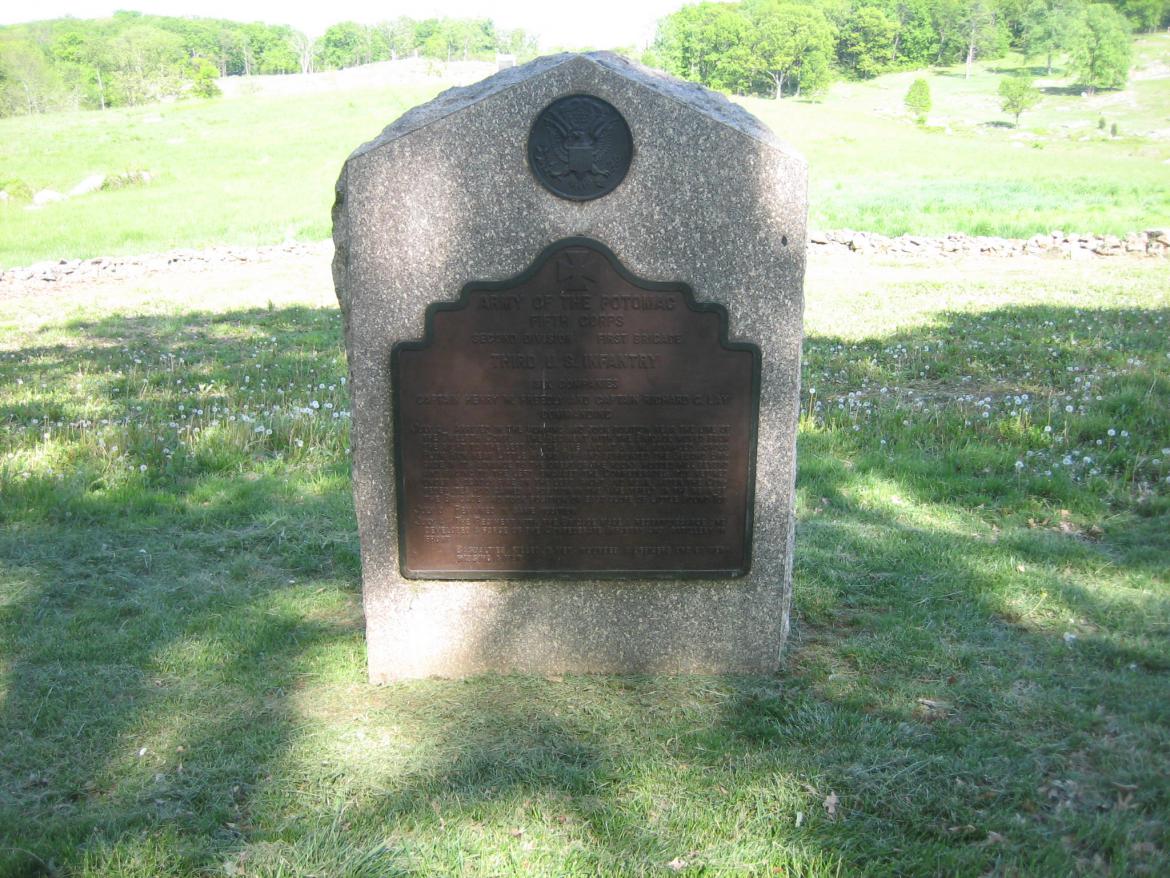 So the Third U.S. essentially was in reserve while others were fighting in the Wheatfield. Was harrassed by enemy fire from Devil’s Den. They were chased by Confederates back across Plum Run, and had to dive in the mud and behind boulders to keep being shot from United States canister rounds fired from Little Round Top. Not a very glorious moment for what is now the military “spit and polish” ceremonial unit. This view was taken from the west facing east at approximately 4:30 PM on Tuesday, May 13, 2008.