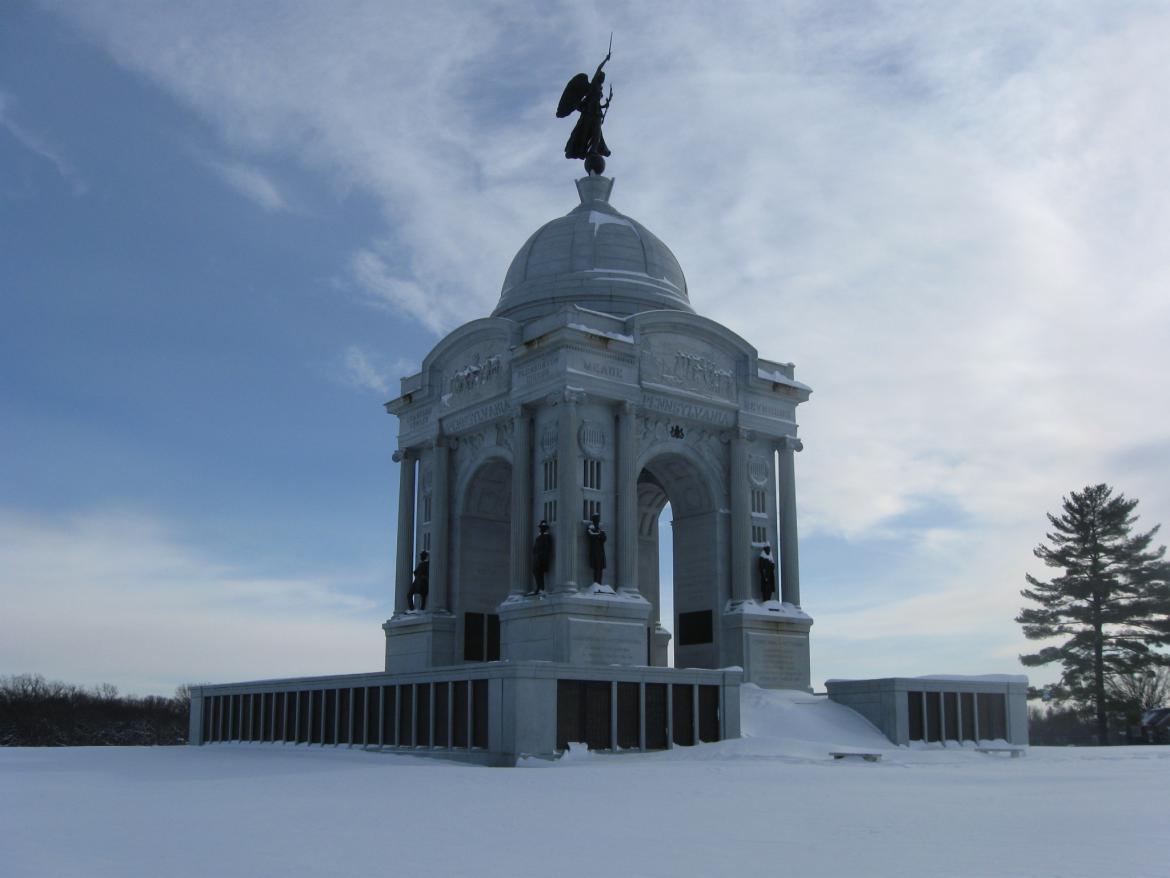 The north and west sides of the Pennsylvania State Monument, which was dedicated on September 27, 1910 at a cost of approximately $150,000. This view was taken facing southeast at approximately 11:00 AM on Sunday, December 20, 2009.

We have taken more than a couple of pictures around Gettysburg the last two years, but we have yet to feature the Pennsylvania State Monument. Naively, we thought we could do an easy post showing the complete monument for New Year’s Day. However, with all the details on the monument, and as consumed that we sometimes are in showing you details, this could take a while. So we will begin our tour of the monument by showing some items on the north side. 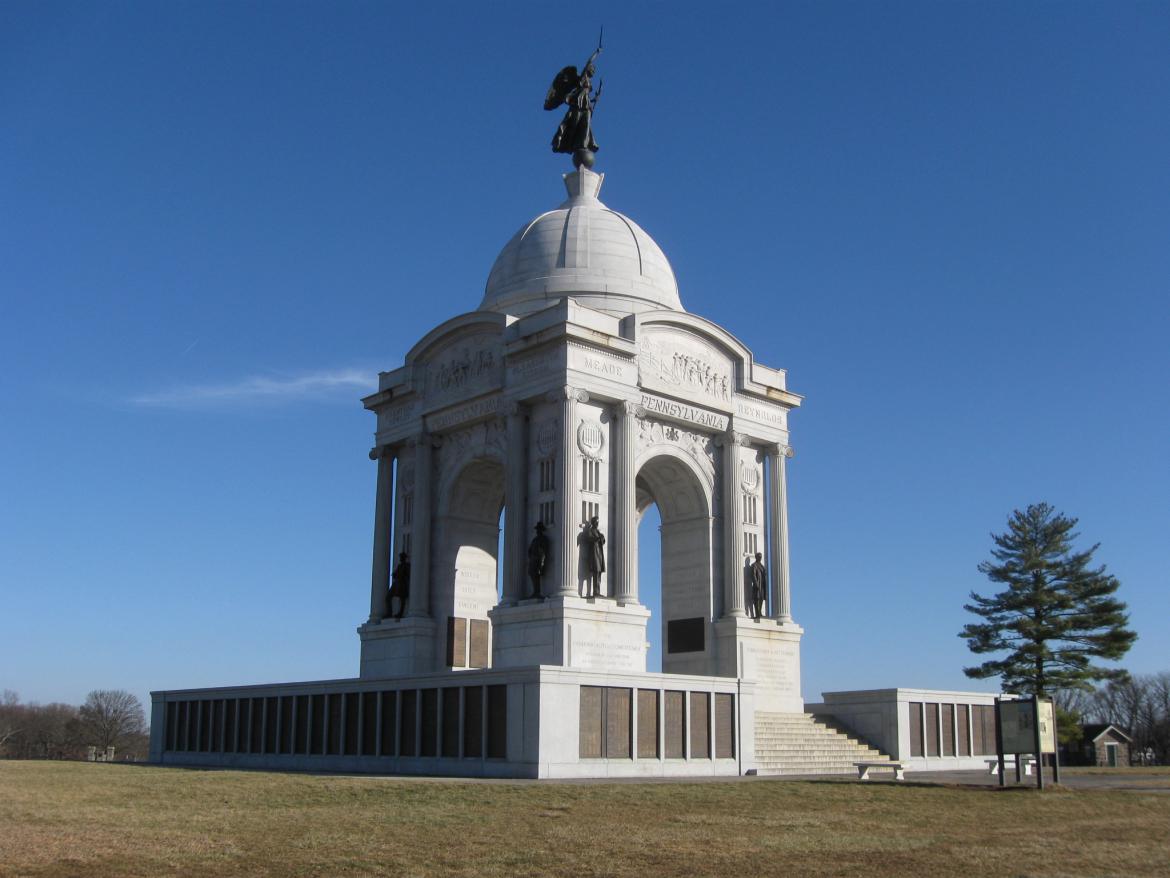 Much of the information from this post was taken from the series of books, Pennsylvania at Gettysburg. “As Inspector of Construction, to be on duty at all times, the Commission appointed on Oct. 1st, 1909, James G. Mitchell, himself a soldier, and according to figures kept by him, the weight of the monument is as follows, cut granite stone, 1,252 tons, broken stone 1,410 tons, sand 740 tons, cement 366 tons, steel bars 50 tons, bronze 22 tons,â€”a total of 3,840 tons.” This view was taken facing southeast at approximately 9:45 AM on Thursday, December 25, 2008. 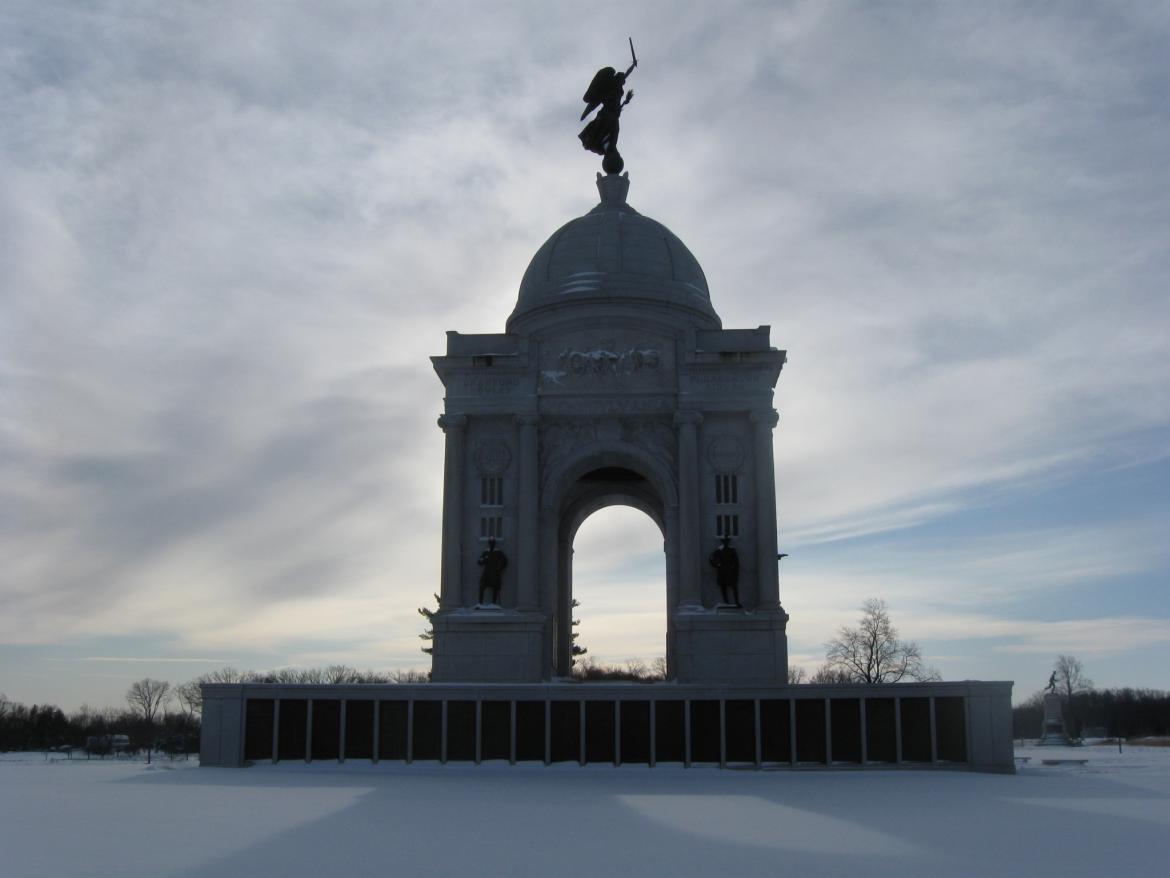 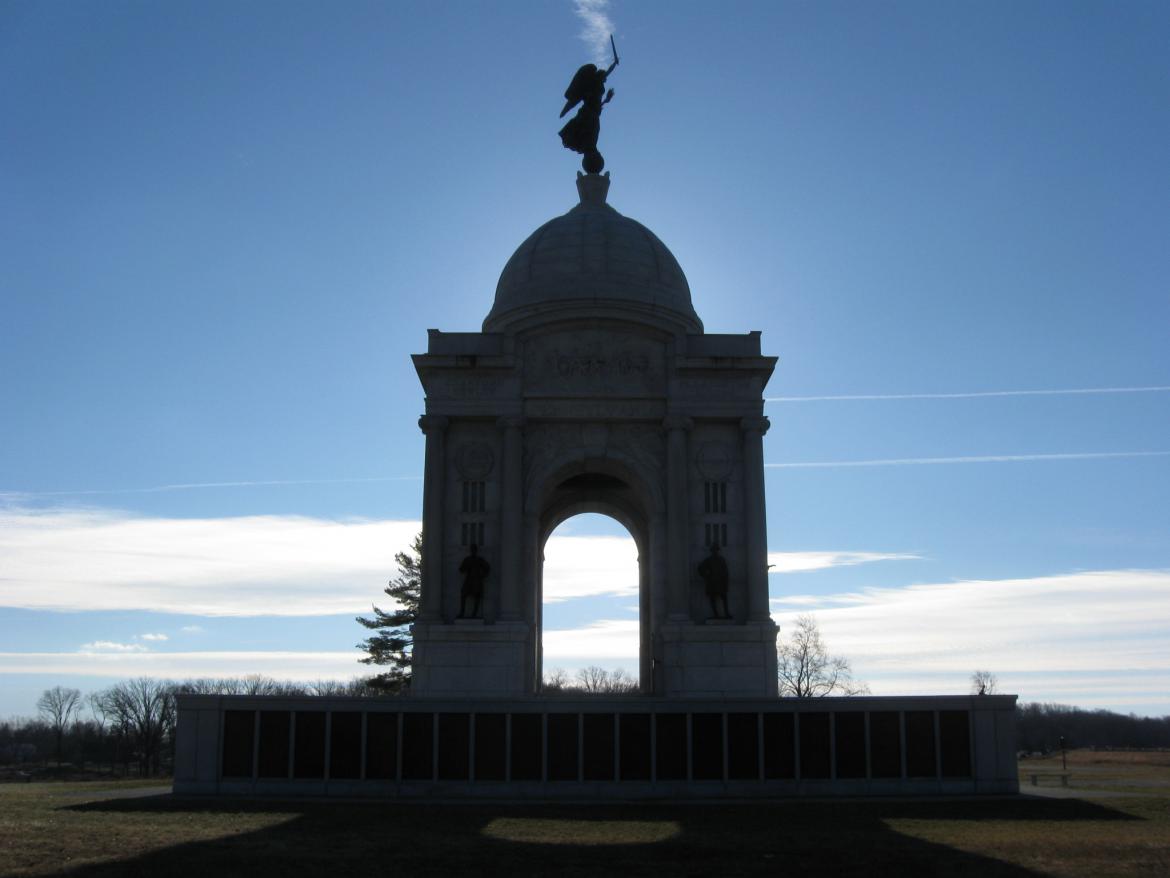 It’s certainly not easy to take a picture of this side of the monument in the morning…This view was taken facing southwest at approximately 9:45 AM on Thursday, December 25, 2008. 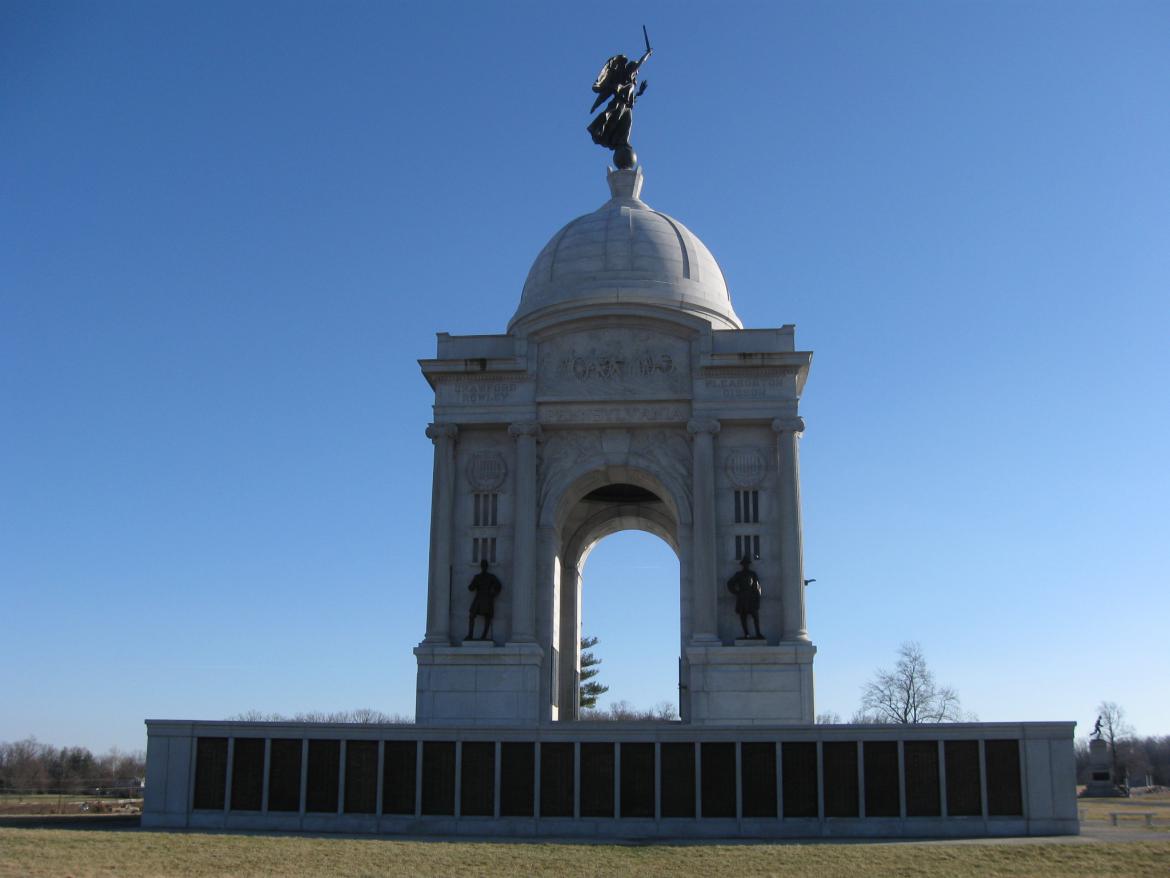 …or even in the afternoon. No matter. We’ll say the first two shots of the north side were “artsy.” We’ll begin our look at the monument, starting at the top, and working our way down. This view was taken facing southwest at approximately 9:45 AM on Thursday, December 25, 2008. 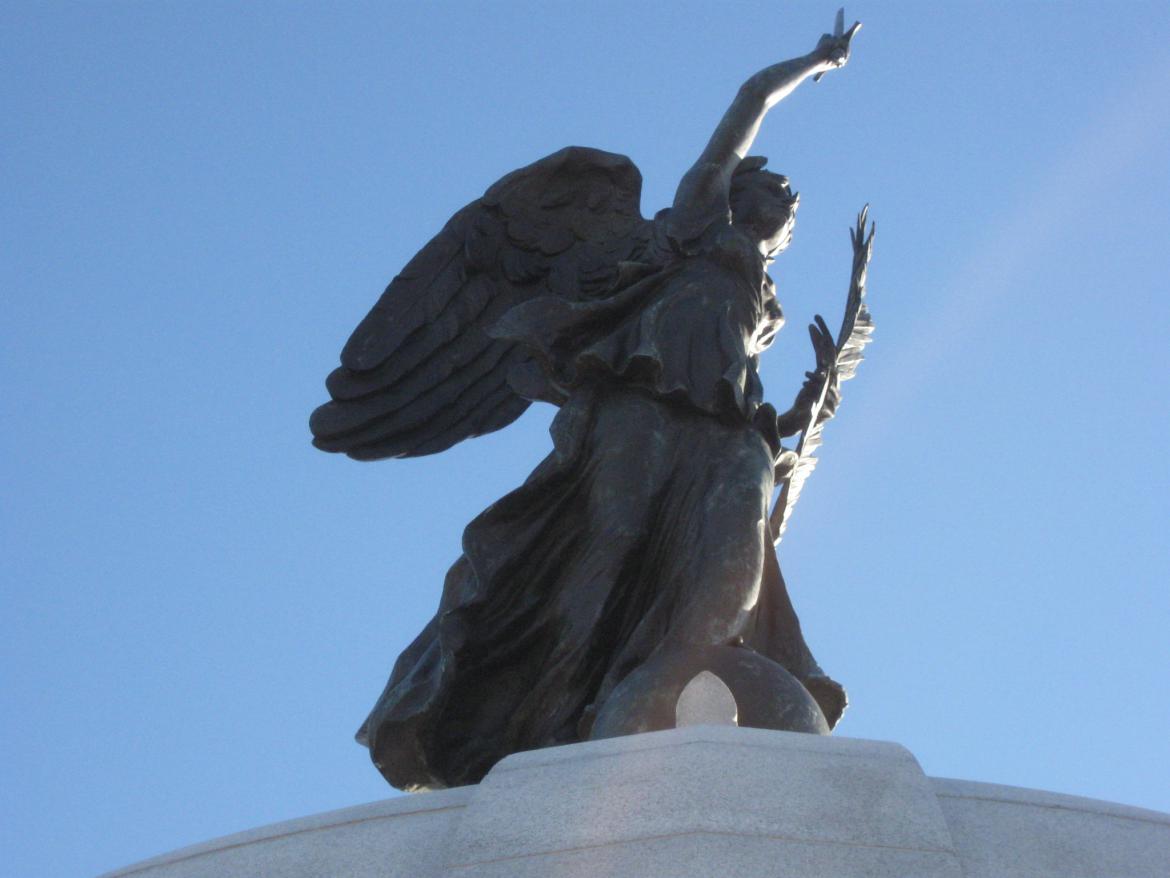 On the top of the monument is the “Goddess of Peace and Victory,” or simply “Victory.” Victory is 21 feet high and weighs 7500 pounds. This view was taken facing southeast at approximately 9:45 AM on Thursday, December 25, 2008. 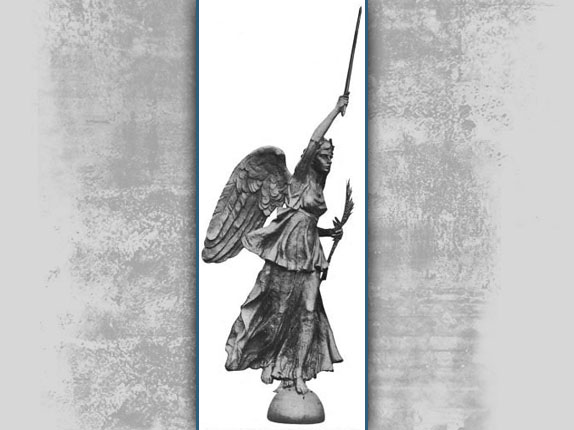 Victory was cast from bronze taken from melting down cannon actually used in the Civil War. Sculptor Samuel Murray of Philadelphia shows a sword in Victory’s right hand, and her left hand holds a palm of peace. This view was taken circa 1910. 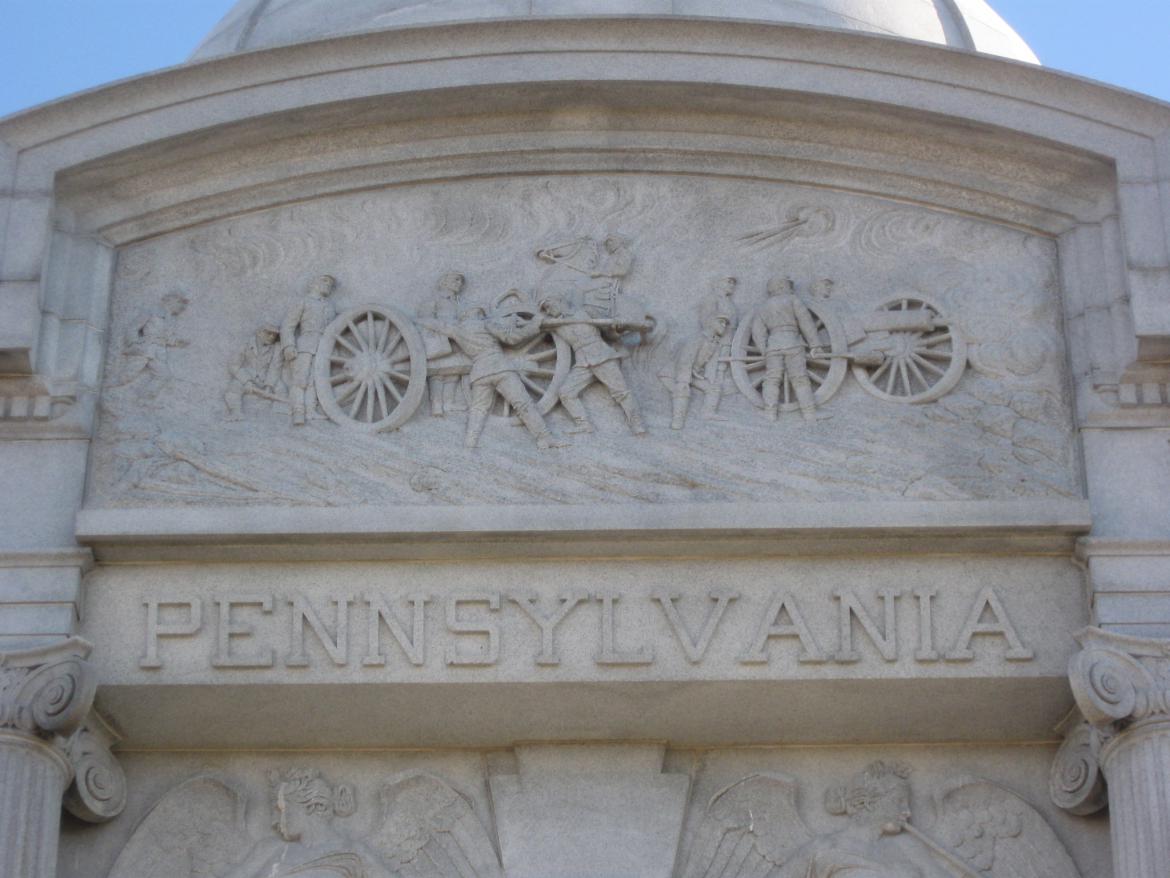 Samuel Murray and the Harrison Granite Company also did the battle scenes above the four archways of the memorial. At the time, they were “said to be among the largest granite monoliths in the world, each being nine feet high and eighteen feet long, and weighing about 25 tons.” This view was taken facing south at approximately 9:45 AM on Thursday, December 25, 2008. 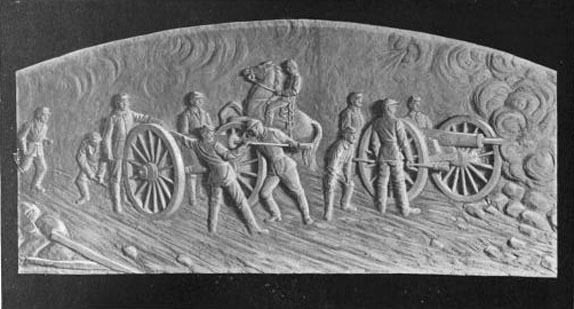 Each monolith depicts a different branch of the service. This one on the north side, of course, represents the artillery. This view was taken circa 1910. 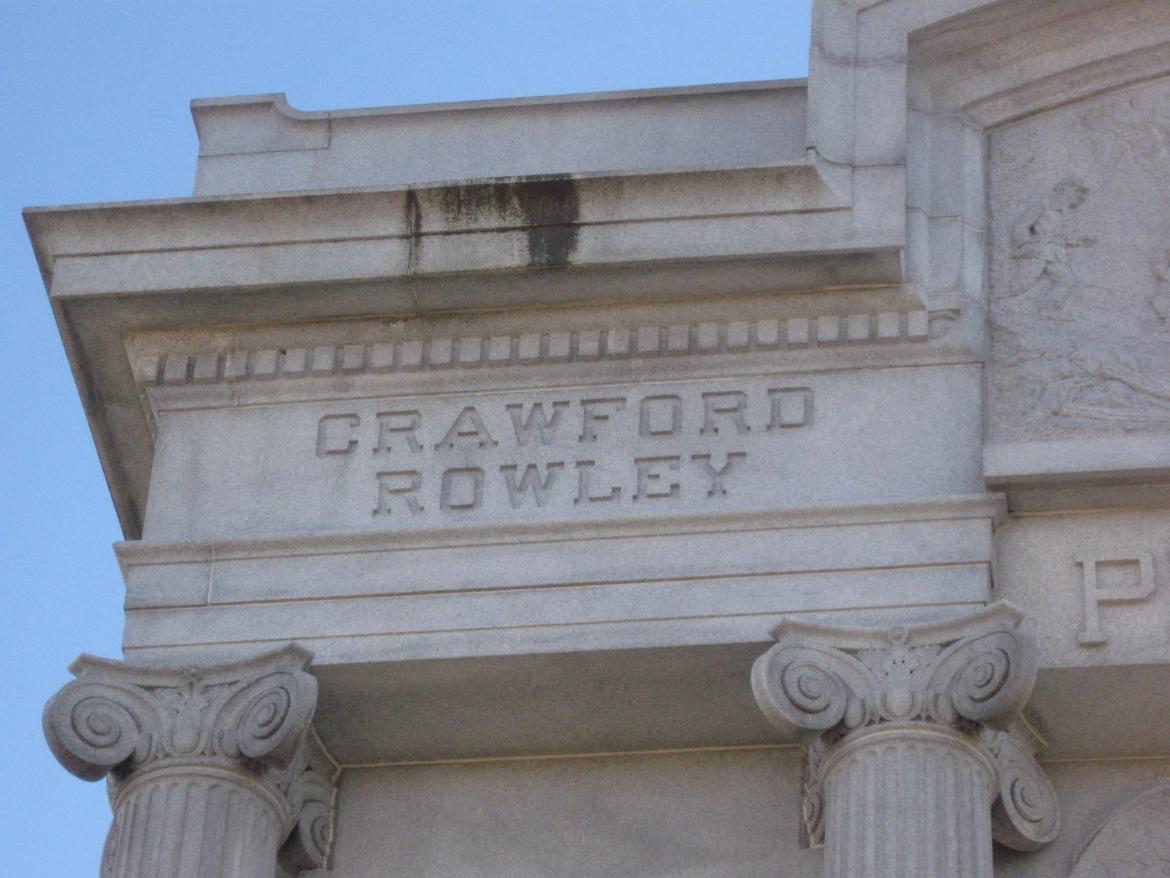 The names of corps and division commanders from Pennsylvania are on the left and the right of each archway. These names on the left (northeast) corner are for Brigadier General Samuel Wiley Crawford, whose Pennsylvania Reserves did well on July 2, 1863. Brigadier General Thomas Rowley was criticized for being intoxicated while he commanded Doubleday’s division of the First Corps on July 1, 1863. This view was taken facing south at approximately 9:45 AM on Thursday, December 25, 2008. 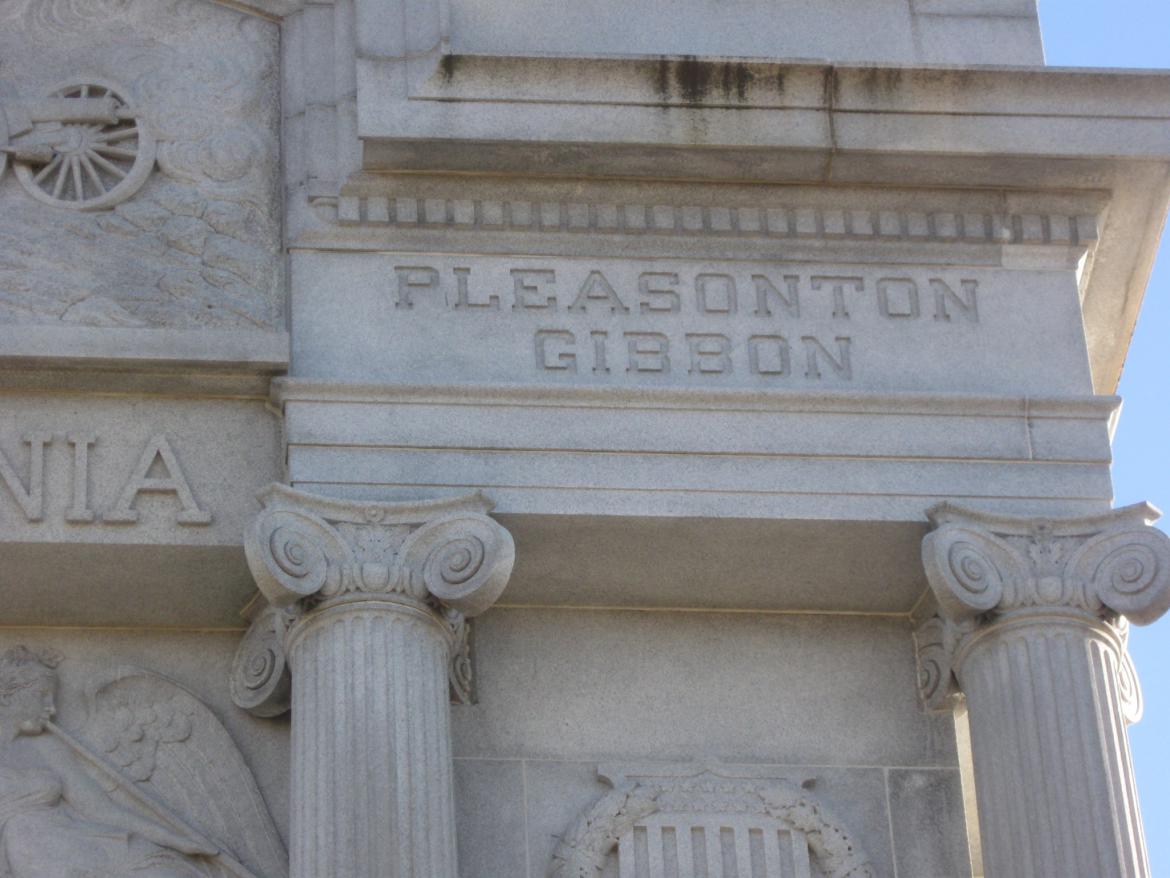 These names on the right (northwest) corner are for Major General Alfred Pleasonton who commanded the Army of the Potomac’s Cavalry Corps, and for Brigadier General John Gibbon, who commanded his division in the Second Corps, and at times the Second Corps during the Gettysburg Campaign. This view was taken facing south at approximately 9:45 AM on Thursday, December 25, 2008. 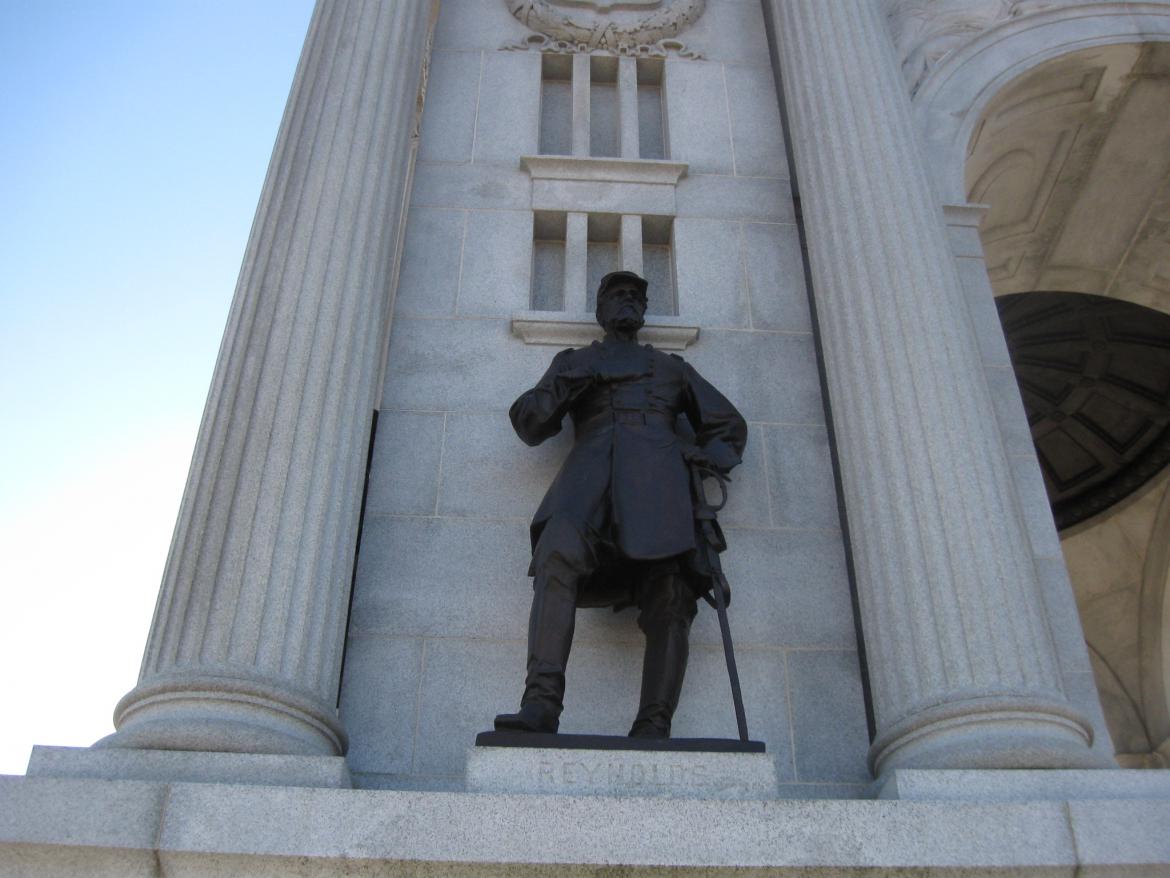 The eight bronze statues around the monument were not present during the dedication in 1910 because of a lack of funds. The Pennsylvania legislature appropriated $40,000 on June 14, 1911 for the eight bronze statues and other work around the monument. The statue of General John Fulton Reynolds is on the northeast side of the memorial. This view was taken facing west at approximately at approximately 9:45 AM on Thursday, December 25, 2008. 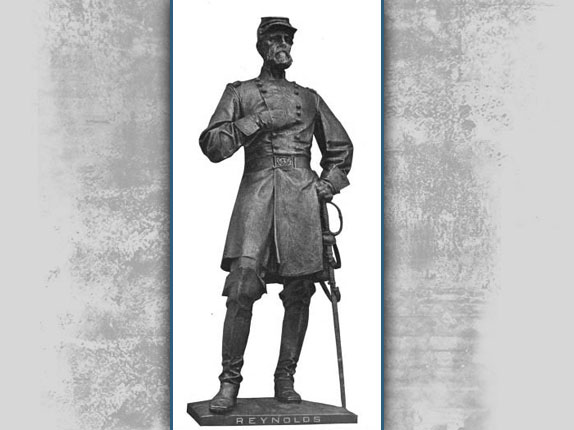 It was sculpted by Lee O. Lawrie, and placed on the monument in May, 1913 in time for the 50th anniversary of the Battle of Gettysburg. This view was taken circa 1910. 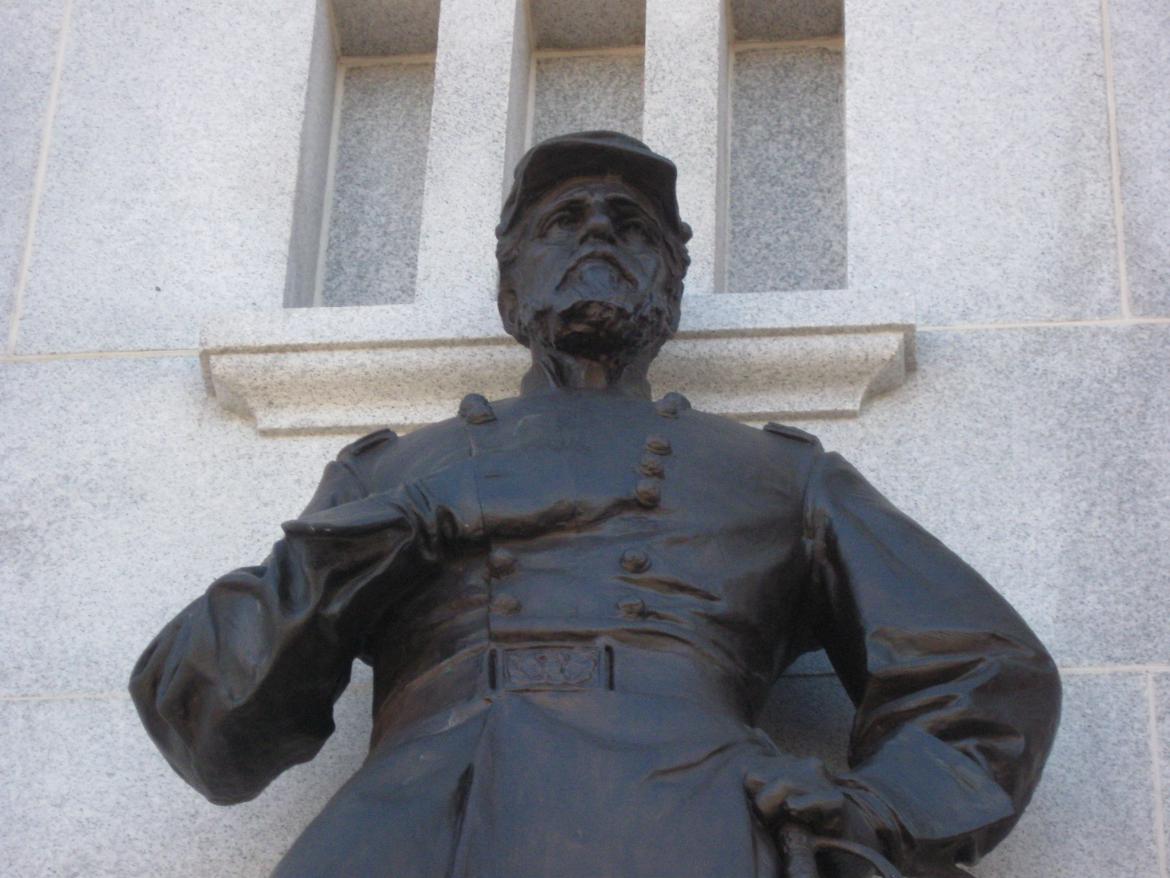 Major General John Fulton Reynolds commanded the left wing of the Army of the Potomac, consisting of his First Corps, the Third Corps, and the Eleventh Corps. He was killed on July 1, 1863. This view was taken facing south at approximately 9:45 AM on Thursday, December 25, 2008. 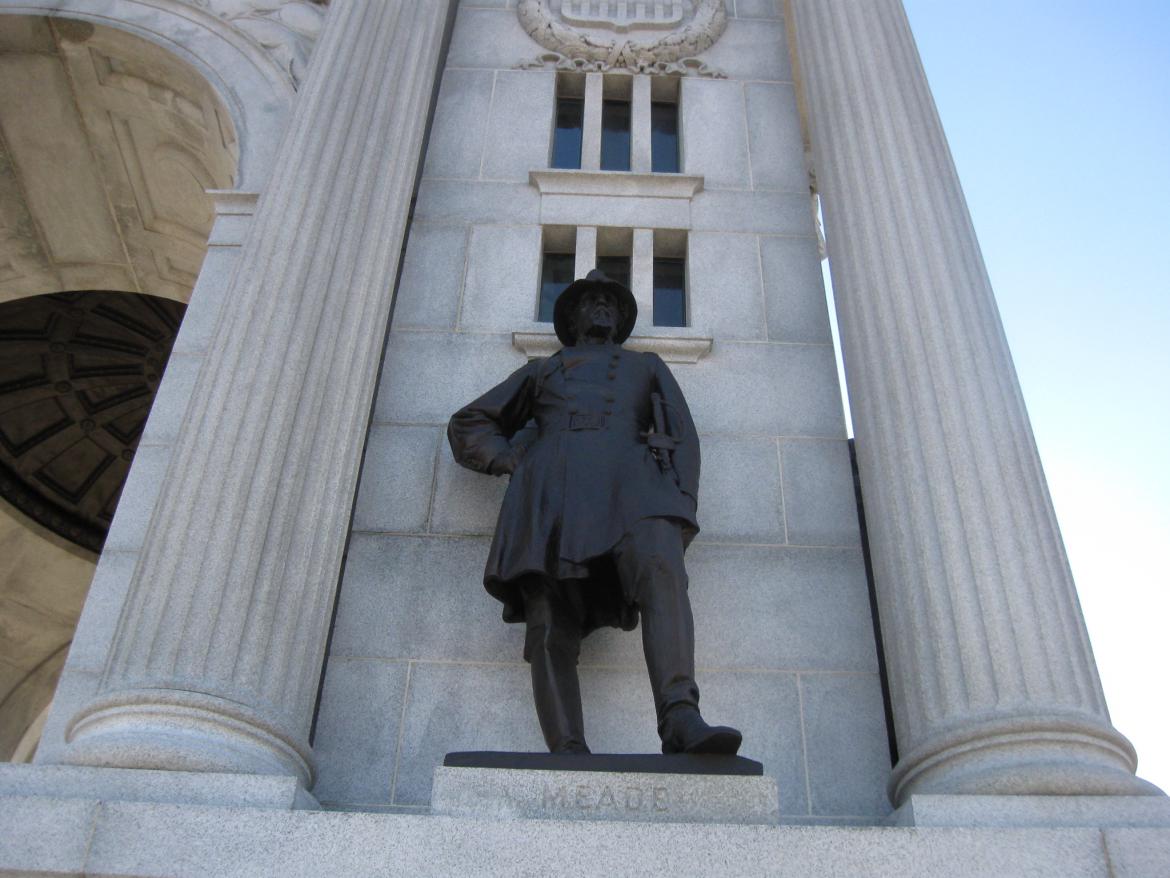 Ths statue of Major General George Gordon Meade is on the northwest side of the monument. “The contract for the modeling casting and setting-in place of these eight statues was given to the Van Amringe Granite Co., of Boston, Monumental Architects, a company of large experience of this character, and one to be depended on as to time, which was essential, inasmuch as the 50th anniversary of the battle was near at hand and it was desired to have the statues in position to be seen by the old soldiers of both sides when going over the field.” This view was taken facing south at approximately 9:45 AM on Thursday, December 25, 2008.

“In making the contract with the contractors there were named thirty sculptors of good repute from whom the contractor could select several who might be found to have the time to make the models… The Commission first examined two-foot models of the subjects, and latter the full sized models, approving each before it was sent to the Gorham Manufacturing Co., at Providence, R. I., to be cast in bronze. These statues are eight feet high…” This view was taken circa 1910. 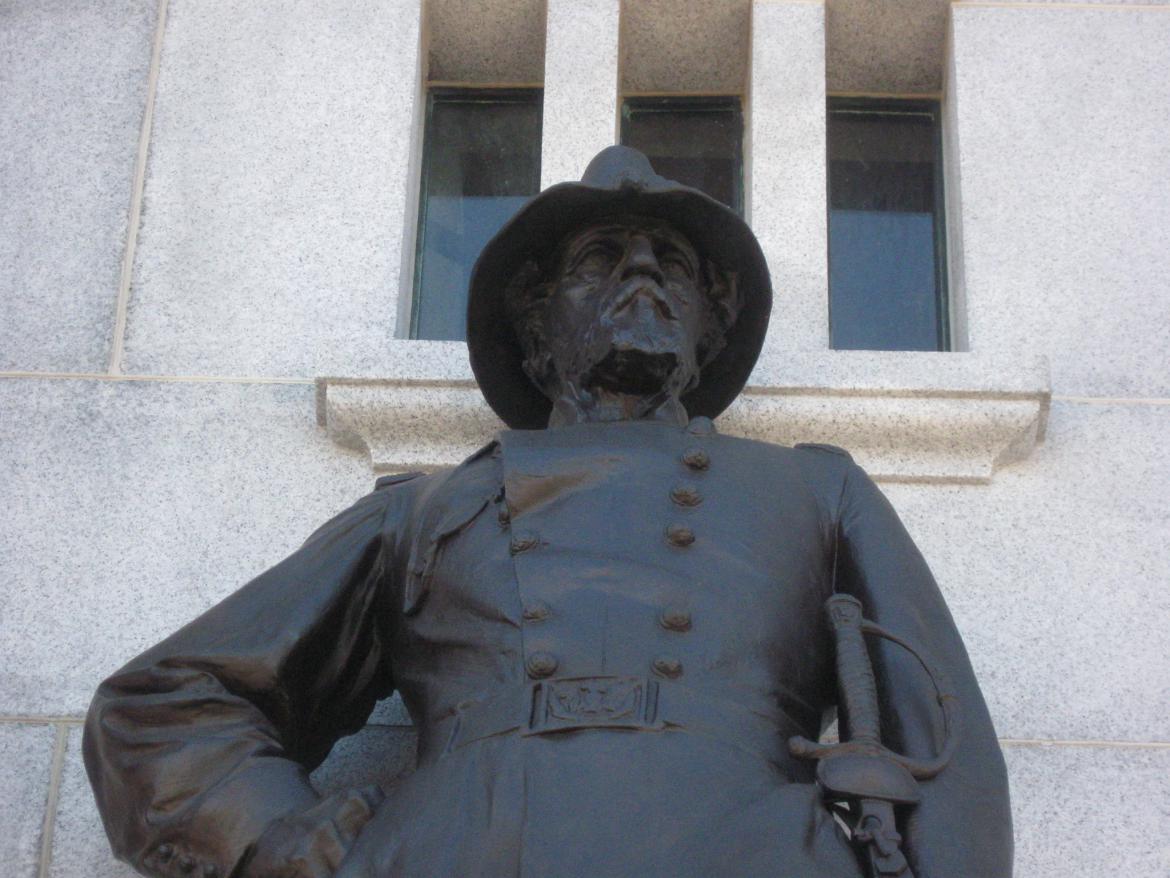 George Gordon Meade commanded the Army of the Potomac from June 28, 1863 until the end of the war. This view was taken facing south at approximately 9:45 AM on Thursday, December 25, 2008.

This has nothing to do with the Pennsylvania monument, but 150 years ago today, on January 1, 1860, the staff of one of Gettysburg’s weekly newspapers, the Adams Sentinel, wrote their review of the year 1859.

The Sentinel was a Republican paper published by Robert Harper, who lived on the southeast quadrant of the Diamond, next to David Wills.

The review was a poem talking about a variety of subjects including:

The passing of the new year, lost love, Napoleon III’s fighting in Italy during the second war for Italian Independence, the Turks fighting the Russians, John Brown’s raid of the previous October, President James Buchanan (â€œBuckâ€), and Gettysburg soon to acquire gas lamps. For what it’s worth:

KIND PATRONS with our annual greeting,
We hail you to a joyous meeting,
We wish you mirth and gladness;
To quaff the flowing cup of joy,
To taste of bliss without alloy,
Or tinge of gloom and sadness.

The Old year on its rushing pinions,
Swept swiftly over Timeâ€™s dominions,
Then with a pall of gloom,
Amongst the dying and the dead,
And hopes and joys forever fled,
Drooped in the murky tomb.

Methought, I saw the Old year come,
Encloaked in thoughts of doubt and gloom,
To form his lonely mansion,
Where he may quietly repose,
And wipe his eyes because he knows
That he is out of fashion.

Then whilst he viewed his funeral train,
Discordant visions reached his brain
Of hope, and fear, and passion;
He thought of moments mis-improved,
Then how his moody soul was moved
By a dread apparition.

Of all the time that he had wasted,
Of all the pleasure he had tasted,
When young and brisk and gay;
He thought of many a bout and spree,
Chock full of frolic, fun, and glee;
But all was passed away.

The old year had not done lamenting,
When, all propriety forgetting,
The New Year rushed along:
â€œAll hail!â€ed him with a joyous shout,
As if St. Nick was still about,
And with a gladsome song.

And now the old year with affright,
Fled in the darkness of the night,
The last night of December;
Into his lone and dreary tomb,
Where scarce was flickering in the gloom
A pale and dying ember.

The New Year promised to the boys,
A sweet-heartâ€™s kiss and other joys;
And also plenty of beaux,
To every charming maiden fair,
With sparkling eyes and golden hair,
And lips the tint of rose.

But Oh! what record hast thou borne
Of hope, and fear, and love, and scorn,
To the eternal bar?
For thou hast heard the widowâ€™s wail,
Transported by the Southern gale,
To Northern lands afar;

And thou has seen Italiaâ€™s plain
Where waving fields of ripening grain,
And Scioâ€™s luscious vine,
Are mingled in the fairy view,
With summerâ€™s green and golden hue,
And scenery divine,

Cursed by the bloody scourge of War,
Whilst, like a red and fiery star,
Oâ€™er vales of living green,
Napoleonâ€™s bannered flag was borne,
And echoed on the breath of morn
That trumpetâ€™s pealing twang.
Italian Liberty the cry,
As oâ€™er the Lombardâ€™s plains they fly,
A serried wall of steel;
Alas! what would Italia expect
From him who rose on Freedomâ€™s wreck,
Than heavier chains to feel?

But tyrants on their gilded thrones,
Supported by the bleaching bones
Of Freedomâ€™s brave defenders.
Know thereâ€™s an age of strife and storm,
When there shall rise from Freedomâ€™s form
A thousand dread avengers;

That then shall cease the reign of night,
Which long has triumphed over right;
God grant to haste the day,
When tyrants on their thrones shall shake,
And tyrannies shall feel and quake,
And Freedom bear the sway.

And Turks along the golden Horn,
For sitting in the blushing morn,
To read Mohammedâ€™s lore,
Do nothing but protest and swear,
That the much talked of Russian bear
Is an egregious bore.

But in our country allâ€™s as dry,
As lemonade without a fly,
To use a social term,
Except a little fighting muss
And any quantity of fuss,
By Old John Brown and firm.

Old John determined it was best,
To leave the regions of the West
And try a Southern land:
He had some twenty warriors brave,
To fight the battles of the slave,
A mongrel band.

For they were white and black and brown,
And John himself of great renown,
The captain of the host;
But Old Virginia rose in might,
To pour her legions to the fight,
Or else give up the ghost.

Death to the foeman was the cry,
But â€˜ere old John had time to fly
The threatening storm,
It burst in fury on his head,
Whilst all around his warriors dead
Lay by his prostrate form.

His name shall live when he is dead
And pillows low his mouldering head,
As one of great renown,
Who, stirring for to free the slave.
Although so radiant and so brave,
Was done up brown.

Election day has come and gone
And Cupid still is playing on,
Still Lymonâ€™s torch is lighted;
And Senor Oveido has led to his bower,
Where pearls and rubies fall in a shower,
To be in love united.

A Lady, who in silk is laced.
With gold, according to her taste,
All by her lover given;
But though she now is young and gay,
Sheâ€™ll wish before sheâ€™s half the way,
That she was safe in heaven.

Democracy has tumbled down.
Has met the fate of old John Brown
Before the peopleâ€™s voice:
Old Buck is standing all alone,
And heaves forth now and then a groan,
Unable to rejoice.

Gettysburg and its maidens fair
With black and red and yellow hair,
Is the last theme I sing:
Upon their charms I will not dwell,
Nor of their many virtues tell,
â€˜Tis far too grand a theme.

Our fame is spreading far and wide,
Our town is praised on every side,
As quite sublime.
Soon we shall see the lamp posts rise,
And draw the lightning from the skies
To write a line.

And now, dear friends, our song is ended,
It might be worse, and might be mended:
Whatâ€™s that to you or I?
Just buy a song and plank the cash,
Then you may call it stuff and trash,
Until you come to die.