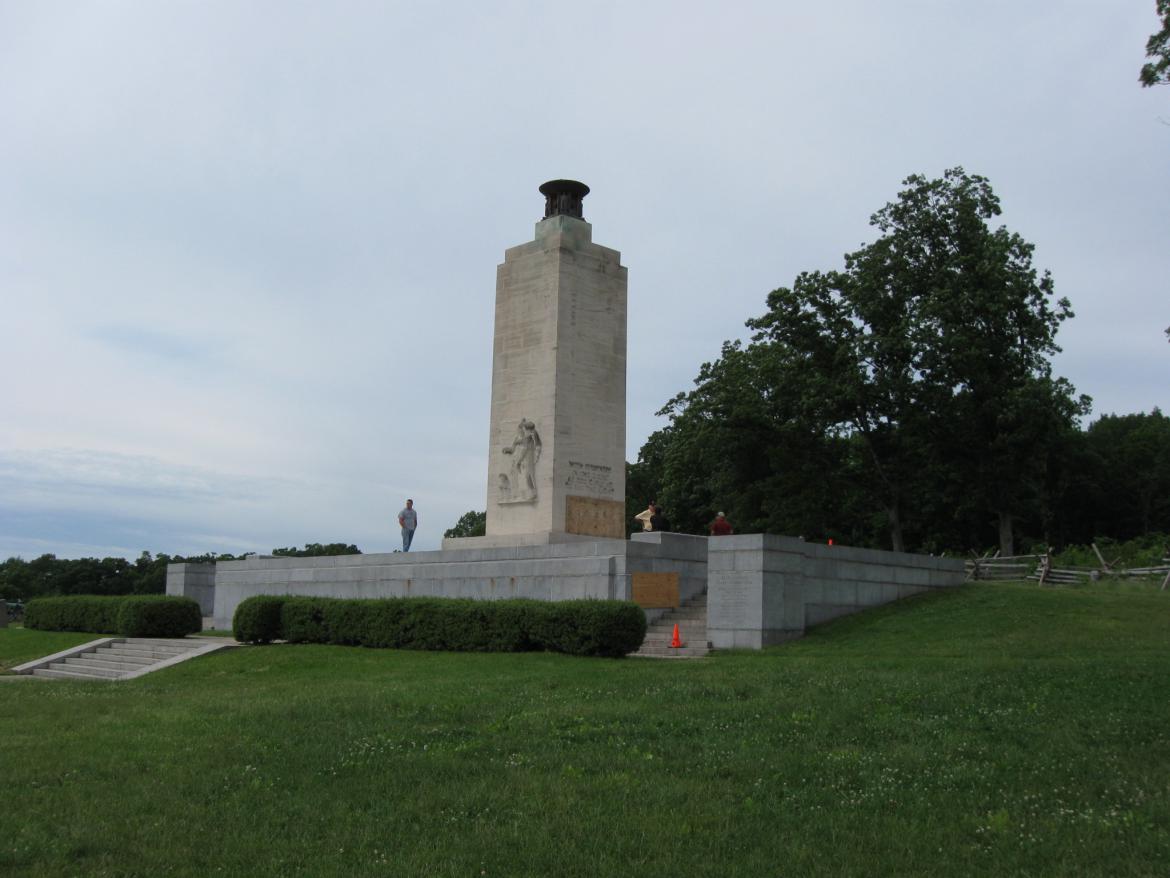 We know that it takes professional expertise to clean the graffiti from this monument, but should it take so long? The National Park Service Technical Preservation Services Branch doesn’t think so. They state: “Building managers and owners of historic properties will be advised on the importance of being prepared for rapid graffiti removal by testing different cleaning techniques in advance in order to select the most appropriate and sensitive cleaning technique.” This view was taken facing northwest at approximately 4:30 PM on Monday, June 1, 2009.

The Eternal Light Peace Memorial (Peace Light) was vandalized on January 8, 2009. The graffiti on the monument is yet to be cleaned. Excuses that we have heard about or read for the delay include:

The NPS is waiting for dry weather so they can move heavy equipment into this area (although the monument itself is basically one large granite pad, and their heavy equipment has been very visible around other monuments, such as the North Carolina monument, this spring.)

And here it sits, all boarded up. So far, the vandals, who have not been caught by the way, have won.

The National Park Service, in its own Preservation Brief from the Technical Preservation Services Branch, states in the first line of Bulletin #38: “Removing graffiti as soon as it appears is the key to its elimination–and recurrence.”

We hope they have the Peace Light all cleaned up tomorrow, but in the meantime, we’ve put a graphic up on the right side of our site that counts how many days it’s been since the Peace Light was vandalized. 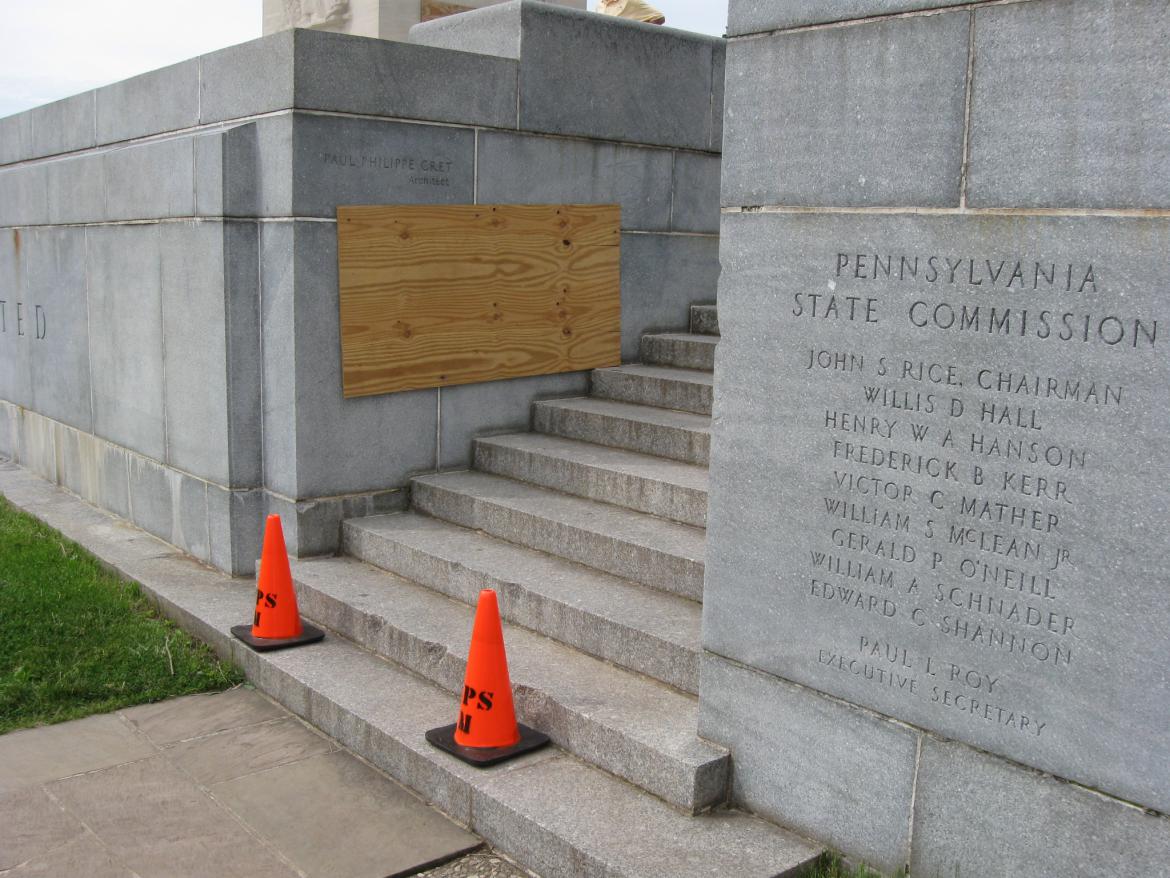 The spokesperson for Gettysburg National Military Park informed us in an email last week that “The park’s monument preservation crew is satisfied with the way their new steam cleaner removed the graffiti from the granite. They will be getting up there to do the rest of it soon.” This view was taken facing northwest at approximately 4:30 PM on Monday, June 1, 2009. 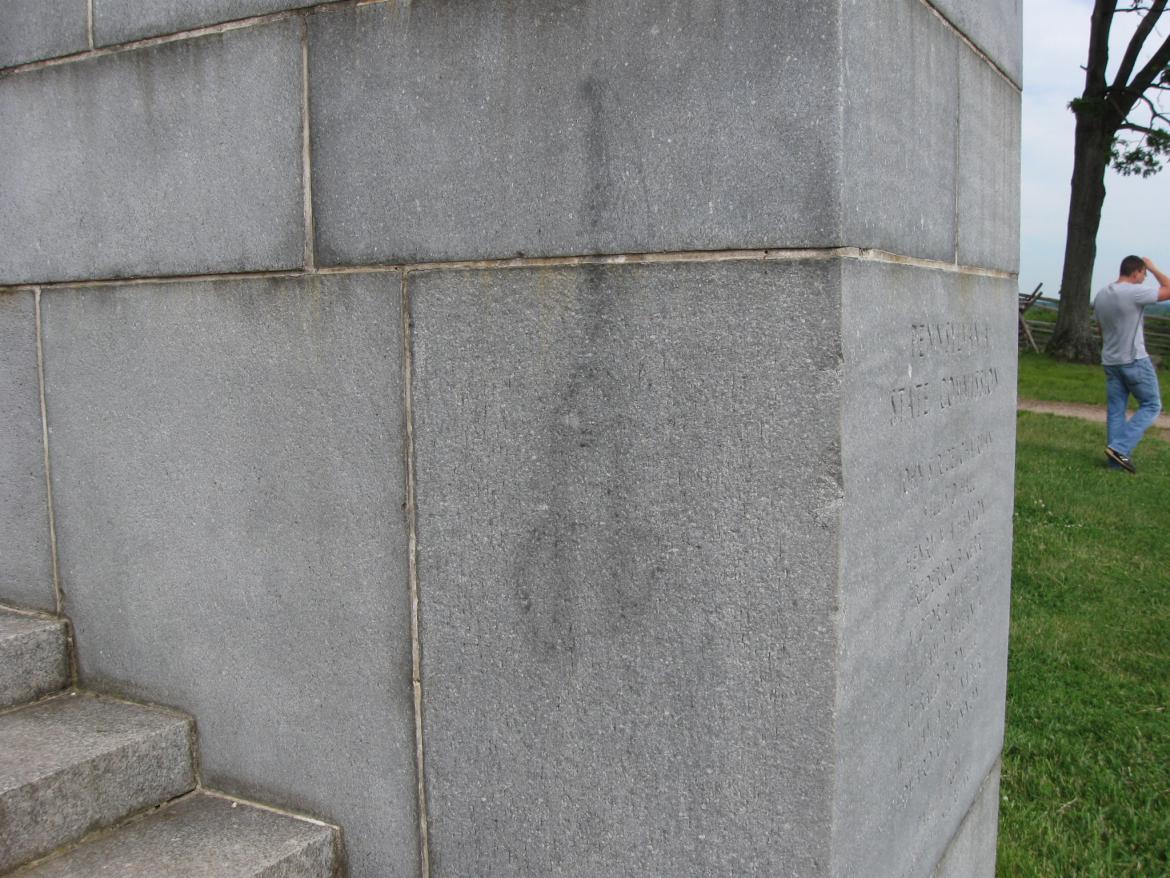 Ok, here is one of the locations on which they used the steam cleaning. They are pleased with this?… This view was taken facing northeast at approximately 4:30 PM on Monday, June 1, 2009. 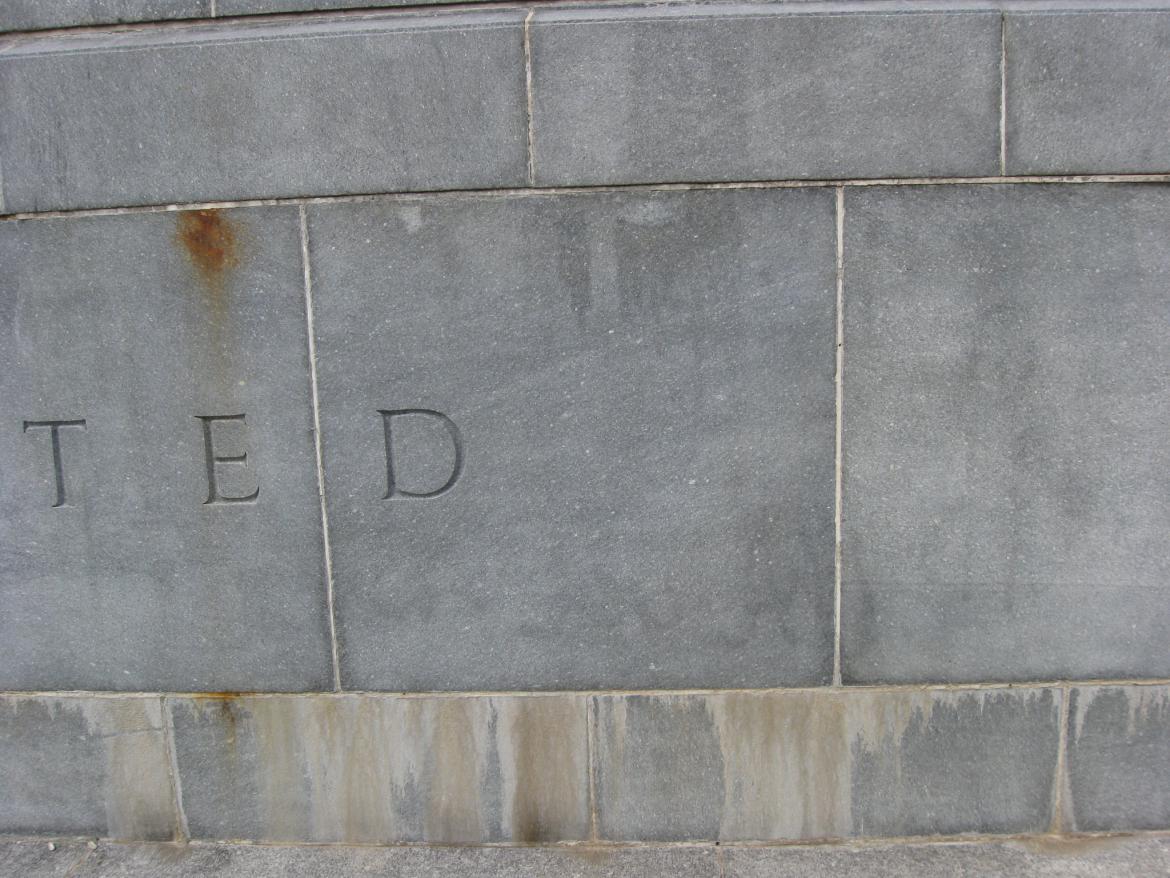 … or this? It is possible that we have different standards. This view was taken facing north at approximately 4:30 PM on Monday, June 1, 2009. 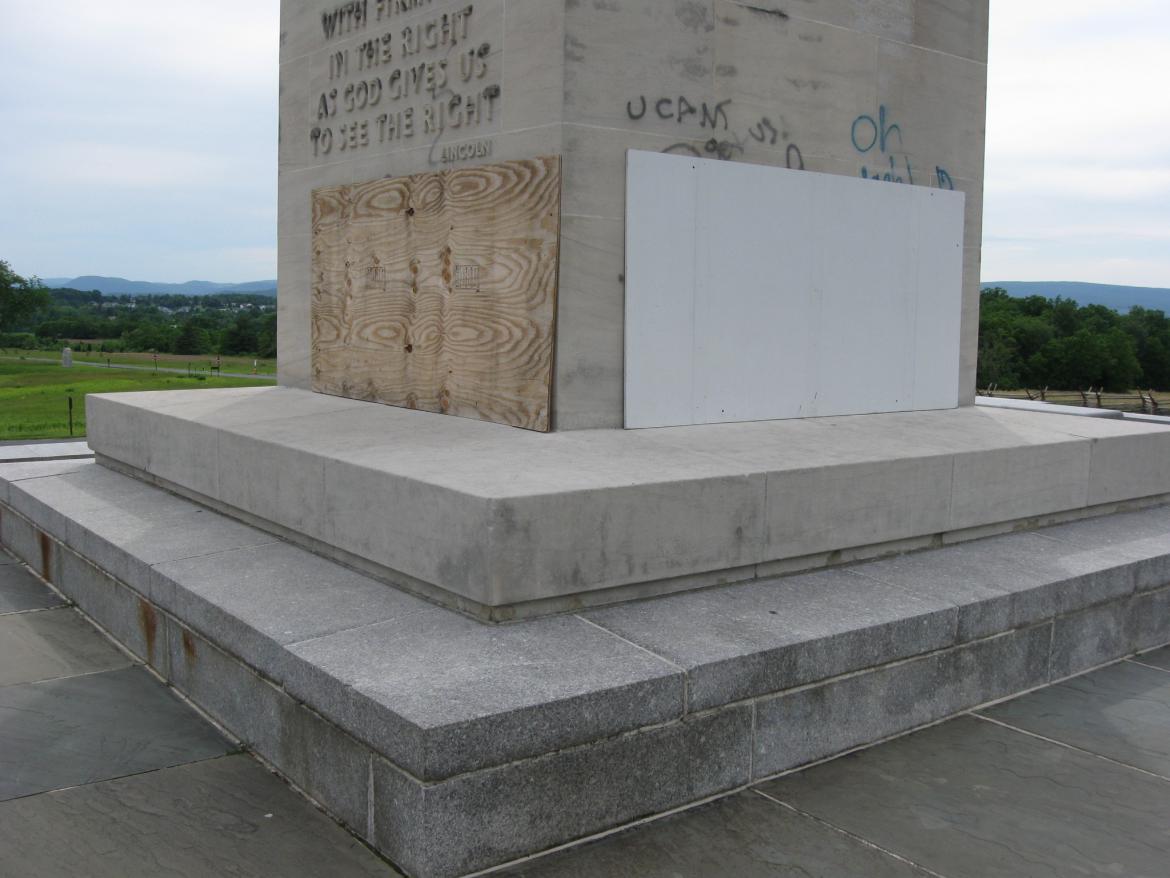 We understand sensitive methods should be used in cleaning this monument, but with over 1300 monuments, plaques and markers, and this not being the first instance of vandalism, shouldn’t we have been better prepared? As the National Park Service Technical Preservation Services Bulletin #38 states: “Most graffiti is made with spray paints.” This view was taken facing southwest at approximately 4:30 PM on Monday, June 1, 2009.

As the National Park Service Technical Preservation Services Branch Bulletin #38 states: “Graffiti that is not removed quickly tends to attract more graffiti. Often motivated by a need to have their work seen, graffitists tend to be discouraged from repeating their efforts in a location where their work is quickly removed.” This view was taken facing west at approximately 4:30 PM on Tuesday, May 19, 2009. 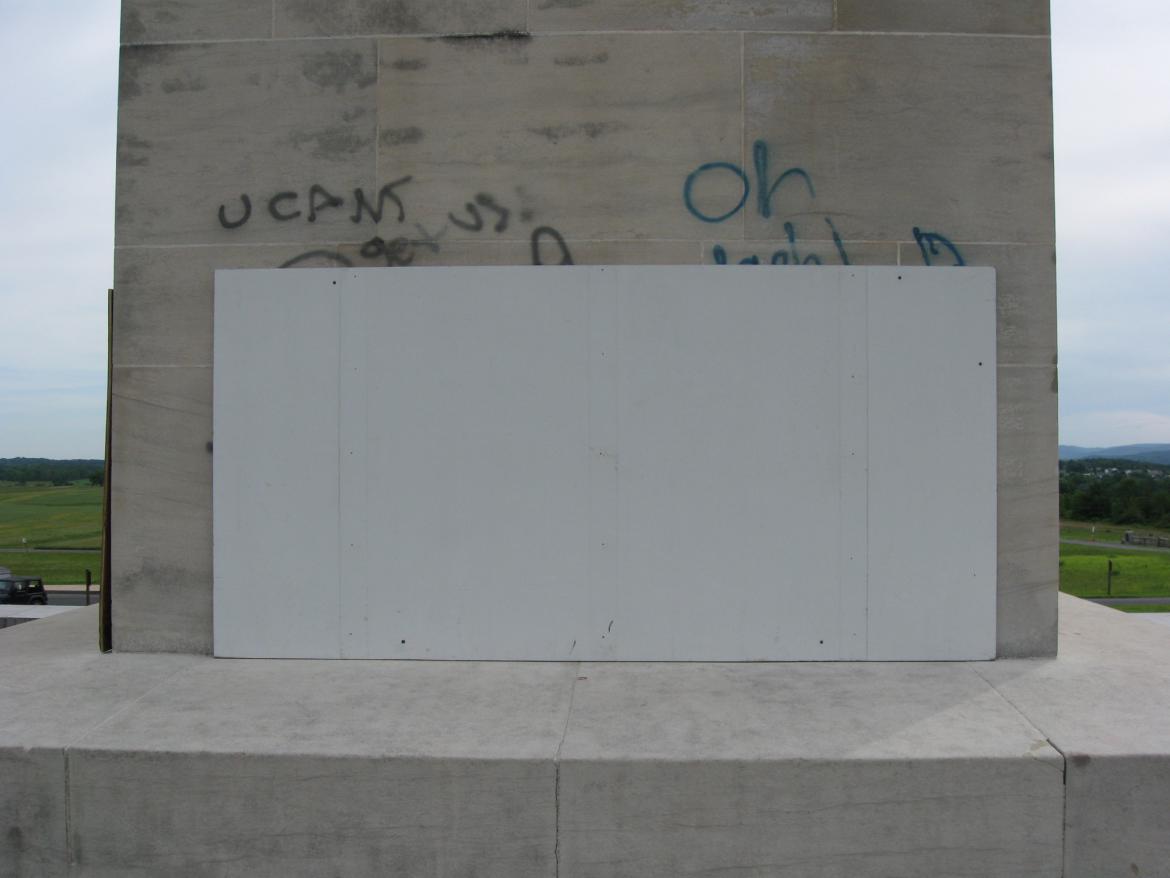 National Park Service Technical Preservation Services Branch Bulletin #38 states: “Although rapid graffiti removal is the most effective weapon in eliminating graffiti and preventing its recurrence in the same location, hasty, untested removal attempts can disfigure and cause harm to historic masonry (Editor’s Note: We’re now approaching the five months vandalism anniversary at the Peace Light. We probably don’t worry about being hasty at this point). Thus, it is important that the owner or manager of a historic masonry building or structure be prepared with a plan to ensure the prompt removal of graffiti when it occurs.” This view was taken facing northwest at approximately 4:30 PM on Tuesday, May 19, 2009.