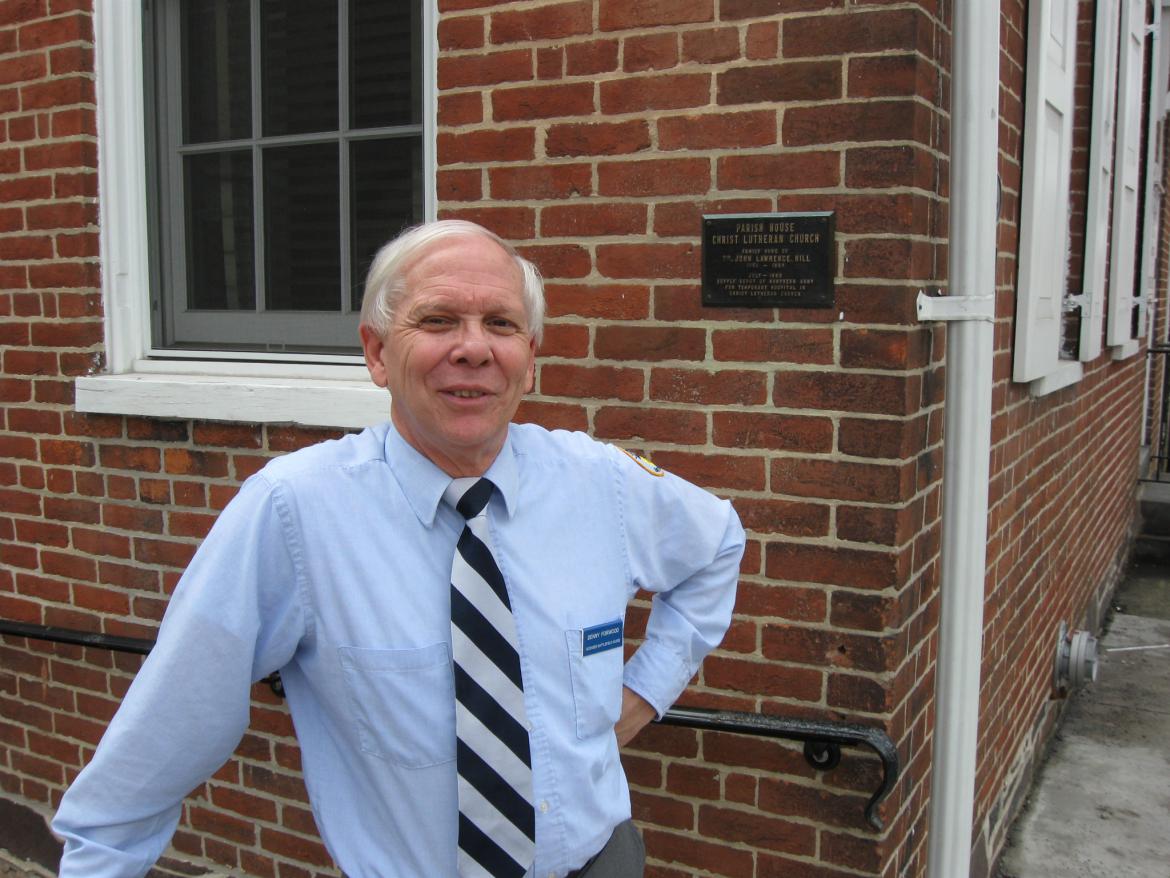 Gettysburg Licensed Battlefield Guide Denny Forwood begins our series on Gettysburg Dental stories. In the 1840s, estimates placed the number of dentists in the north at about 5,500 with a little over 400 of them coming from formal dental colleges. By 1860 there were three dental colleges in the United States, including what would later become the dental school for the University of Maryland. This view was taken facing southwest at approximately 2:45 PM on Sunday, March 29, 2009.

Dr. Forwood was born in Baltimore, Maryland in 1946. He was raised in Towson and Reisterstown, Maryland. Denny graduated from Pennsylvania State University in 1968 with a degree in Microbiology. He graduated from the University of Maryland Dental School in 1972. Dr. Forwood served in the United States Navy from 1972-1974 at the Naval Hospital in Newport, Rhode Island. At that facility he treated hospital patients/hospital staff, and those attending the Navy War College. He has practiced General Dentistry in Frackville, Pennsylvania, from 1974 to the present.

Denny has been a Gettysburg Licensed Battlefield Guide for 15 years. His wife, Dana, is a teacher at Gettysburg Area High School. They have two daughters Elyse, and Emily. His other interests includes raising and showing bulldogs and tinkering with a temperamental English Morgan Plus 4 sports car.

This map shows the locations of the videos in this series. Video #1 was shot on Chambersburg Street near Christ Lutheran Church. Video #2 was shot north of town near the intersection of Howard Avenue and the Carlisle Road. Video #3 was filmed near the Florida State Monument on West Confederate Avenue. This map was created facing north at approximately 9:00 PM on Friday, April 10, 2009. 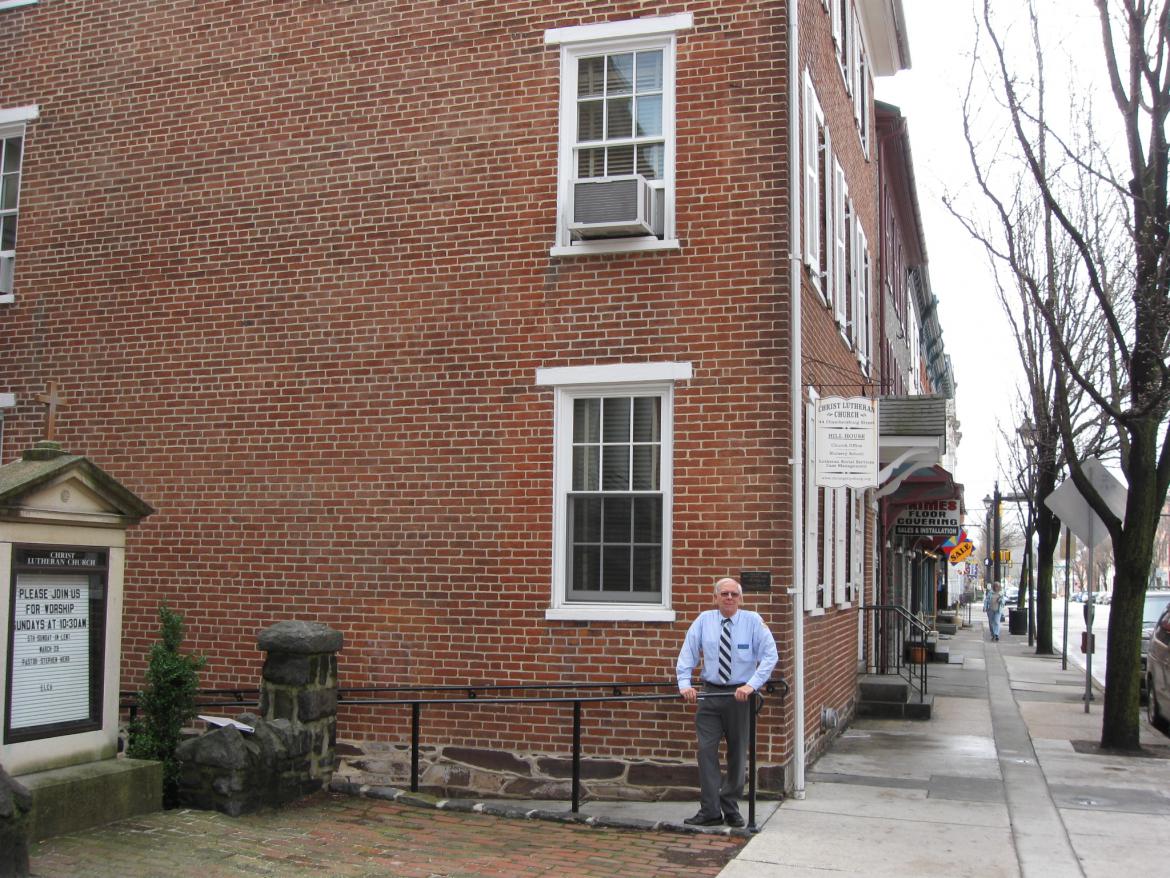 Dr. Denny Forwood is standing near the Dr. John Lawrence Hill House on Chambersburg Street, near the Christ Lutheran Church. Hill was one of two Gettysburg Dentists in 1860. The other was Ferdinand Vandersloot who resided near what is now the Adams County Courthouse annex on Baltimore Street. This view was taken facing west at approximately 2:45 PM on Sunday, March 29, 2009.
Get the Flash Player to see this player.
In Video #1, Licensed Battlefield Guide Denny Forwood is standing near the home of Gettysburg Civil War Dentist, John Lawrence Hill. Denny gives a general history of dentistry in America in the mid-nineteenth century. He also explains the difference between the United States and Confederate States armies in their acceptance of dentists into the service. 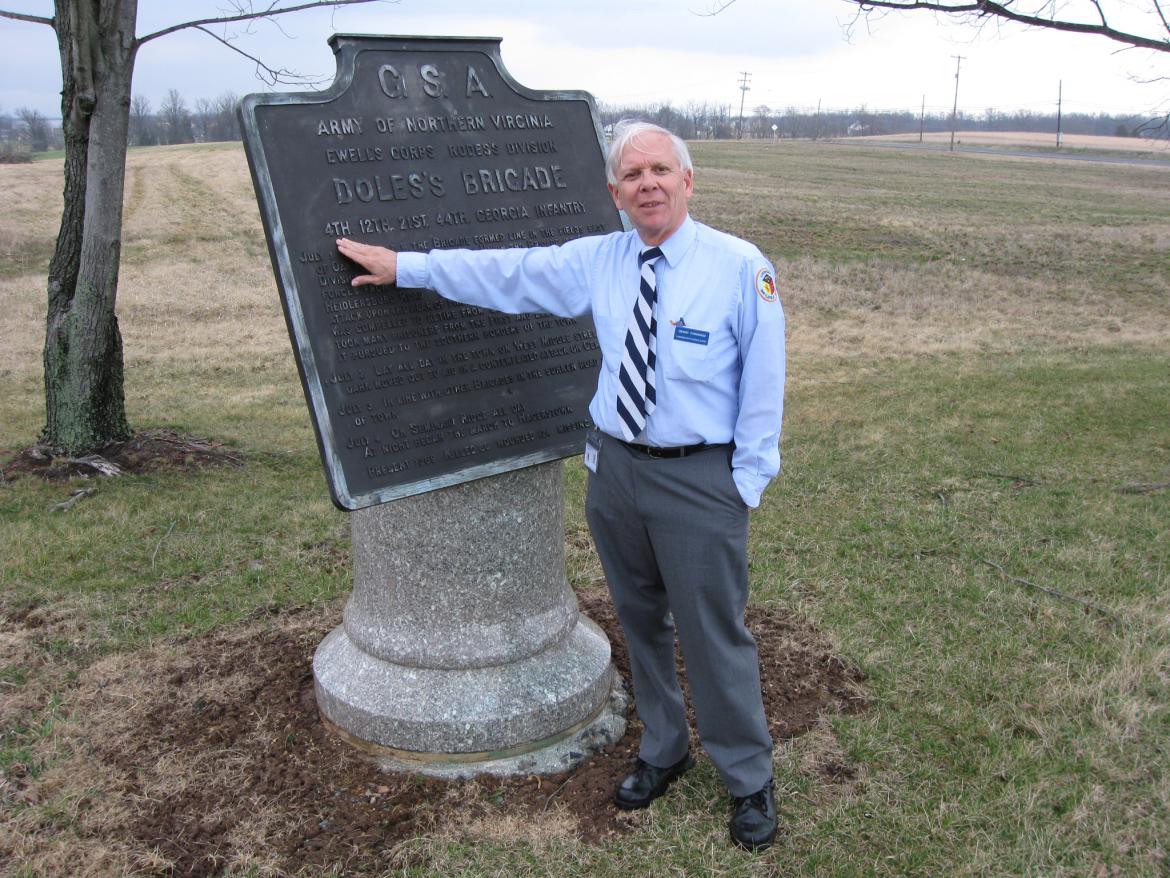 Licensed Battlefield Guide Denny Forwood is standing near the brigade marker for Dole’s Georgia Brigade on the first days’s battlefield north of town. He is pointing out the 4th Georgia Infantry Regiment commanded by Lieutenant-Colonel David Read Evans Winn. Winn was killed during the fighting of July 1, 1863. The report written by his successor in command of the 4th Georgia stated that Winn was “gallant and brave to a fault, his loss is a severe one to this command, his country, family, and friends. Those who knew him best could best appreciate his worth and best realize the loss we have sustained.” Winn was eventually buried in lot 853, Laurel Hill Cemetery, Savannah, Georgia, on September 24, 1871. This view was taken facing northeast at approximately 2:45 PM on Sunday, March 29, 2009.
Get the Flash Player to see this player.
In the previous caption, the report stated of the loss of Lieutenant-Colonel D.R.E. Winn, “those who knew him best could best appreciate his worth…” As Denny explains in Video #2, however, Gettysburg’s Blocher family appreciated how much parts of Winn’s body were worth. 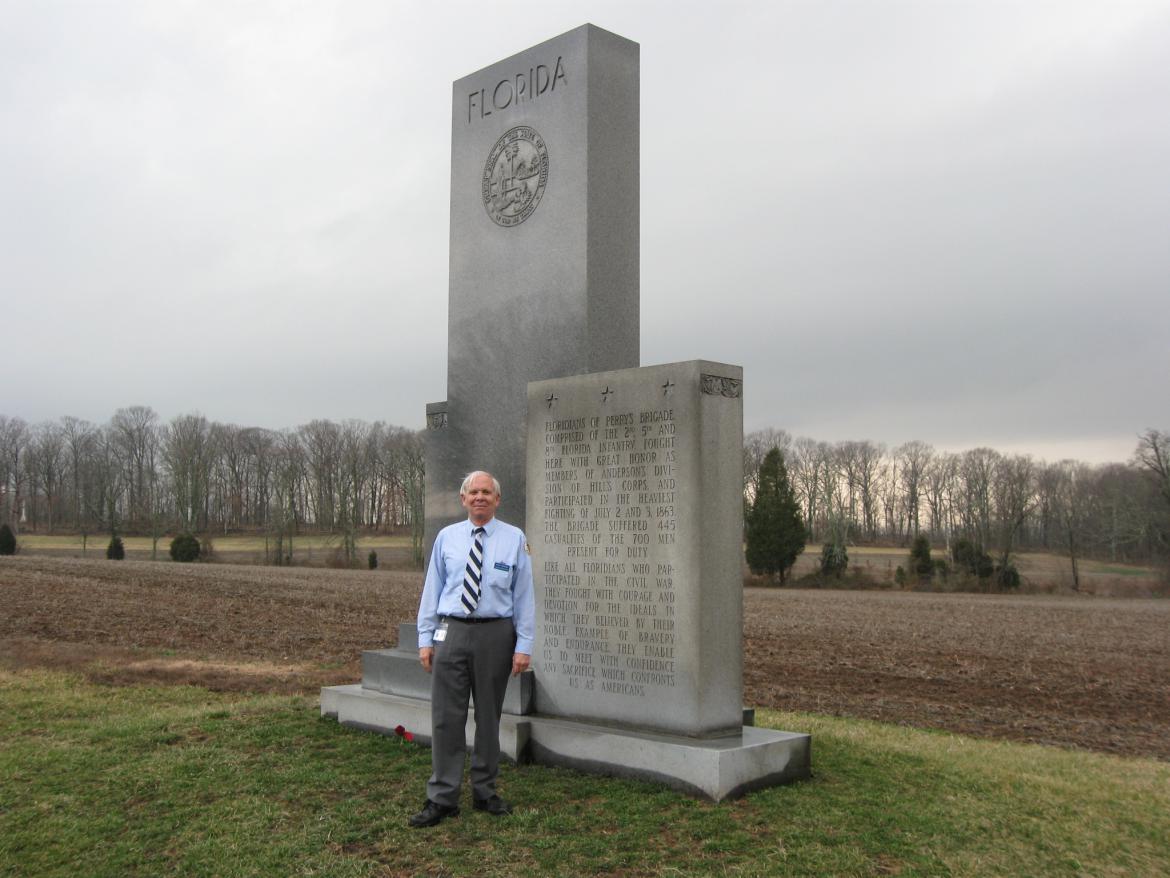 Dr. Denny Forwood is standing by the Florida State Monument near West Confederate Avenue along Seminary Ridge. Lewis Powell was a member of the 2nd Florida Infantry Regiment of Perry’s (Lang’s) Brigade and was wounded and captured at Gettysburg on either July 2nd or July 3rd, 1863. He spent time at a field hospital located on the campus of Pennsylvania College. He will ultimately escape and go south to Virginia riding with John Mosby’s cavalry through 1864. By late 1864 he will also start to use the alias of Lewis Paine. Finally arriving in Washington in early 1865 he will join John Wilkes Booth and what will become known as the Lincoln conspirators.This view was taken facing southwest at approximately 2:45 PM on Sunday, March 29, 2009.
Get the Flash Player to see this player.
In video #3, Denny gives a brief biography of Lewis Powell, and describes the medical problem with his jaw.

He will be given the roll of killing Secretary of State William Seward at the same time Booth is assassinating Lincoln at Ford’s Theatre. After gaining entry to their home he will go to the second floor and attack William Seward with a large knife. Seward is recuperating from a serious carriage accident with a concussion, broken arm, multiple bruises and a broken lower jaw. Although stabbed multiple times a potential lethal wound is deflected by a collar he is wearing. Fleeing the house, Powell is captured three days later, and tried and hanged for his part in the conspiracy. This view was taken aboard the monitor U.S.S. Saugus in 1865.