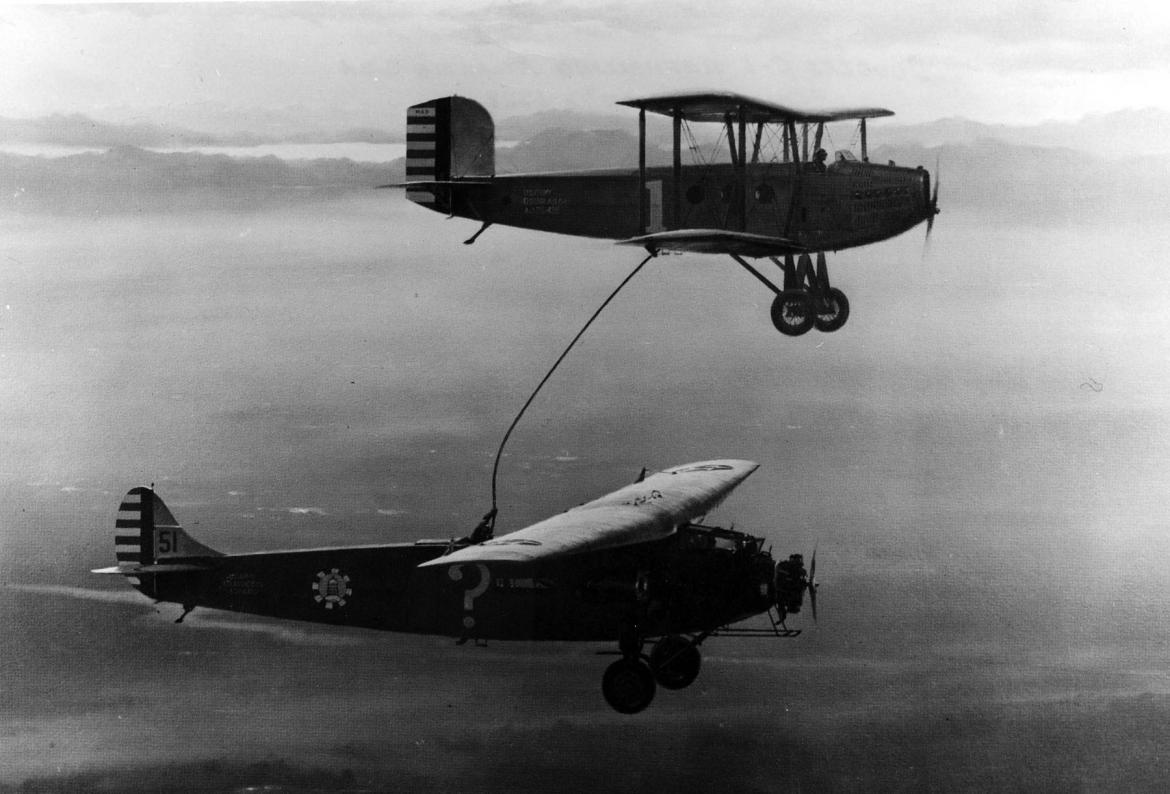 From January 1-7, 1929 a tri-engined Fokker C-2 aircraft, the Question Mark stayed aloft in order to experiment with air refueling. The plane received its name because when asked before the flight how long they thought they could stay in the air, the crew members replied that they didn’t know. The crew of five included Lieutenant Elwood “Pete” Quesada and Captain Ira Eaker who visited Gettysburg in October of that same year, 1929, largely based on their fame from the Question Mark mission. The Question Mark, over a 150 hour and 40 minute period, made 43 contacts with a couple of modified Douglas C-1 transport aircraft, each contact lasting approximately seven and a half minutes. Daylight contacts took place at an altitude of 2000-3000 feet. Nighttime contacts took place at an altitude of 5000-7000 feet. The planes stayed 15 to 20 feet apart during the fuel transfers. The Question Mark received 5700 gallons of fuel, and this event played a crucial role in the development of the United States Army Air Corps. This image, taken in January, 1929 is courtesy of the United States Air Force.

Arlington National Cemetery, overlooking Washington, D.C., has many connections to Gettysburg and to the Gettysburg Campaign. There are many more connections than to only Robert E. Lee’s residence, and John F. Kennedy’s grave. Almost every row in the older sections have someone buried there who had a link to Gettysburg.

Gettysburg Licensed Battlefield Guide Rich Kohr shows us the individuals connected to Gettysburg who are buried at Arlington.

To see the previous posts on Gettysburg at Arlington, click here.

In today’s Arlington post, Gettysburg Licensed Battlefield Guide Rich Kohr shows the site of the Gettysburg Flying Service, later the Gettysburg Airport, that was located on the first day’s battlefield between Oak Ridge and Forney Ridge. 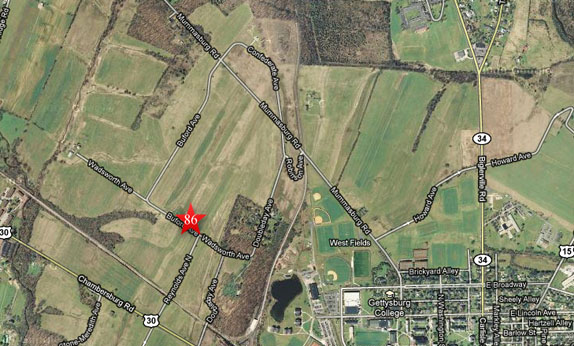 This map shows us the locations taken of videos for our Gettysburg at Arlington series. Videos #1-#85 were shown in our previous Arlington posts. Video #86 was taken on the first day’s field near the junction of Reynolds, Buford, and Wadsworth Avenues. This map was created facing north at approximately 7:00 PM on Friday, March 11, 2011. 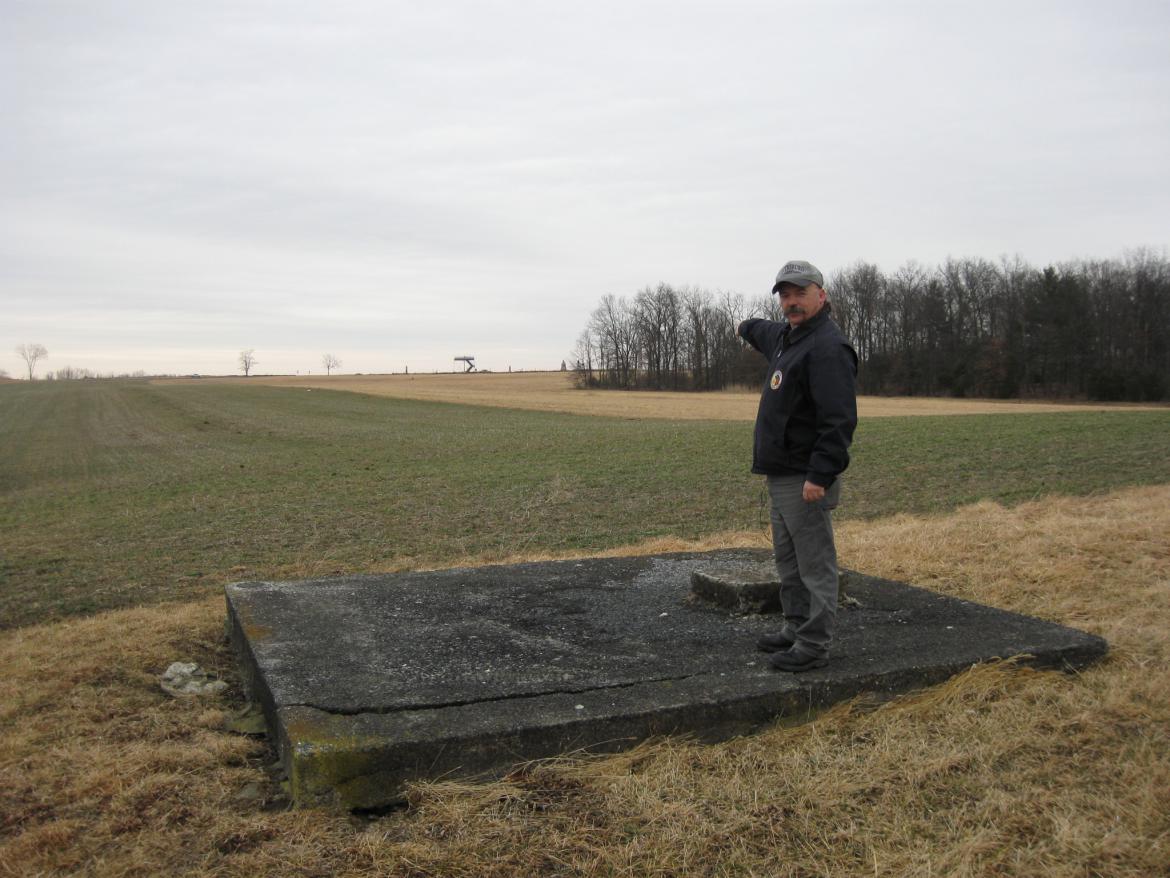 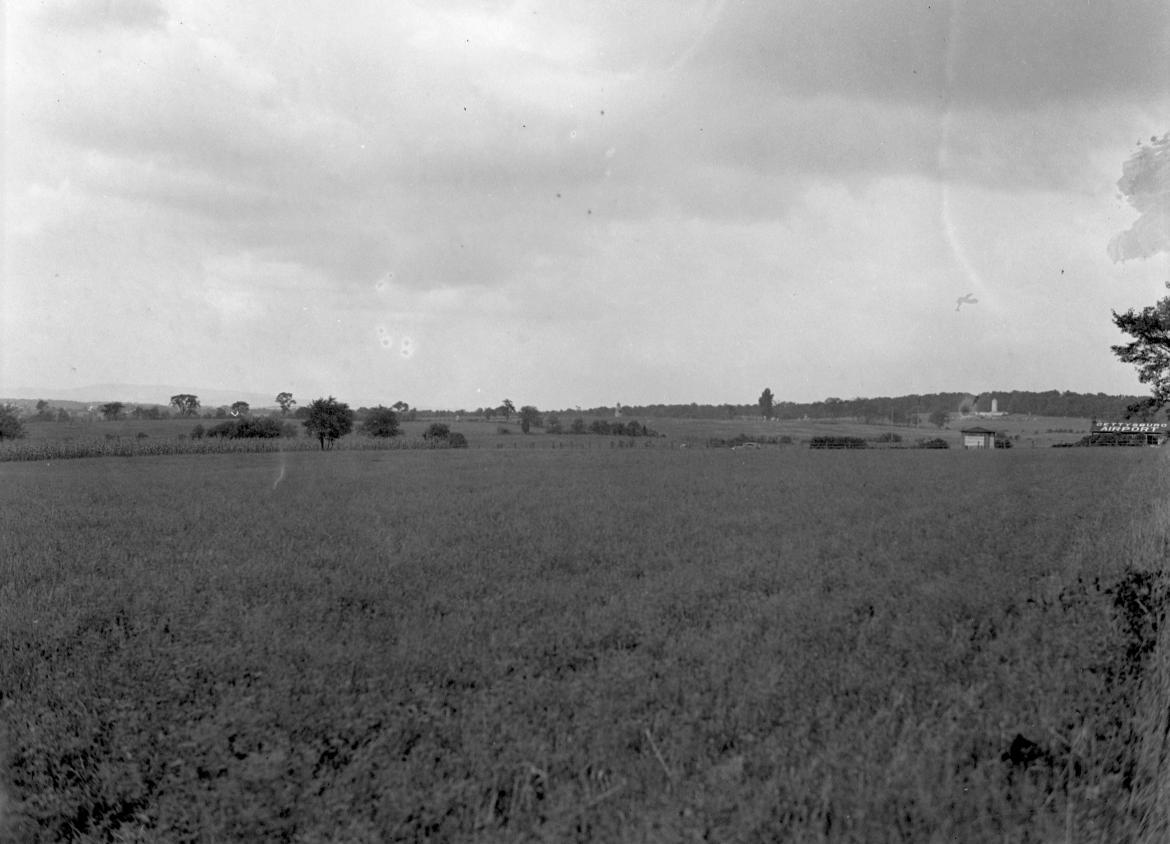 This photograph of the first day’s battlefield shows two structures from the Gettysburg Airport in the right background. The small building below the Eternal Light Peace Memorial (light colored object in the right background) is the one with the foundation on which Rich Kohr was standing in the previous photograph and video. While instruction of students pilots was doing well, the owner of the airport, Charles Doersom, thought that his airport’s claim to fame would be wing repair from the frequent crashes that were occurring. From October 19-20, 1929, this area was home to an air show including demonstrations of air races, aerial bombing, night flying, parachute jumping, and Army and Navy flying exhibitions. The demonstration was held in connection with the official grounding breaking of a new hangar, the dedication of a new machine shop at the airport, and the “proposed expansion of the local port into a larger and more fully equipped flying field with accessories.” A crowd estimated at “more than 20,000” attended the event, and many seemed excited about the possibility of Gettysburg as a flying center. Less than two weeks after the air show, the Stock Market crashed, the expansion plans were not carried out, and this part of the battlefield still retains some of its 1863 appearance. Reynolds Avenue is out of sight on the right. This view was taken facing northeast circa 1940 and is provided courtesy of the Center for Civil War Photography, which has more than 1,000 historic Gettysburg Park images like these on their Flickr. 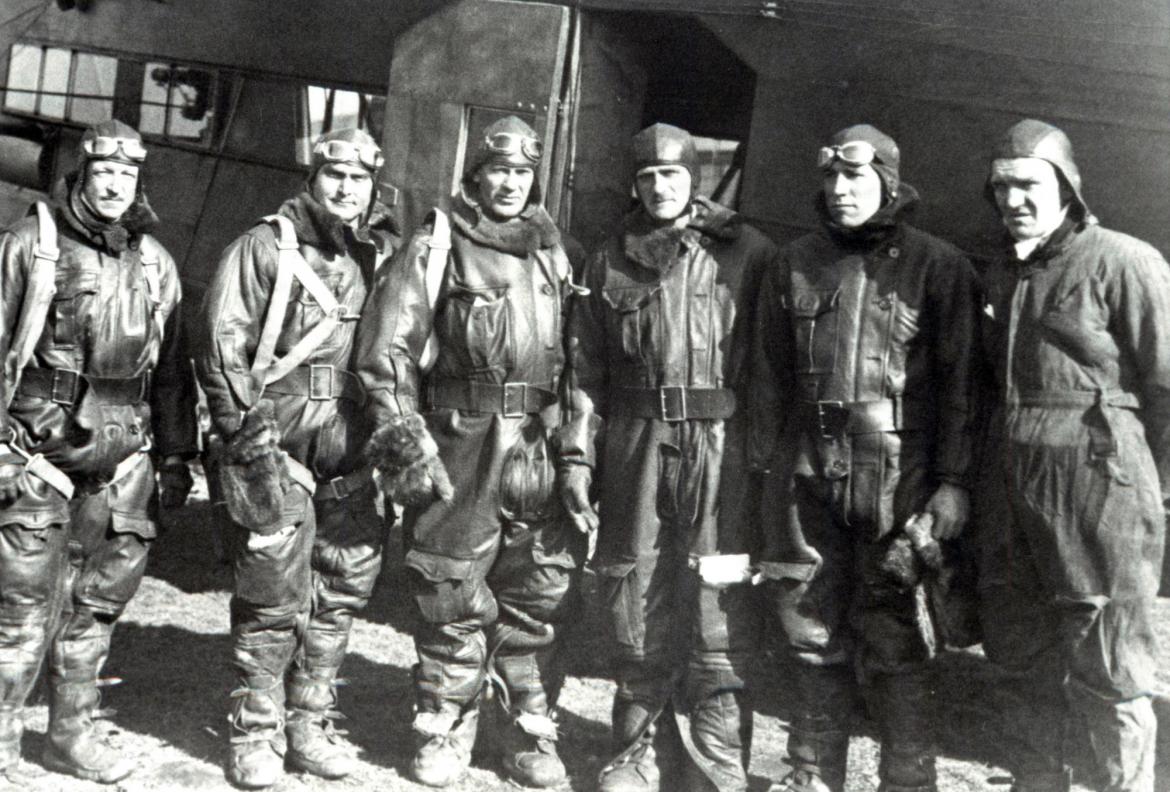 This map shows us the locations taken of videos for our Gettysburg at Arlington series. Videos #1-#85 were shown in our previous Arlington posts. Video #86 is shown on the previous map in this post. Video #87 was taken at the grave of Elwood “Pete” Quesada. Video #88 was taken at the grave of Ira Eaker. This map was created facing north at approximately 7:30 PM on Friday, March 11, 2011. 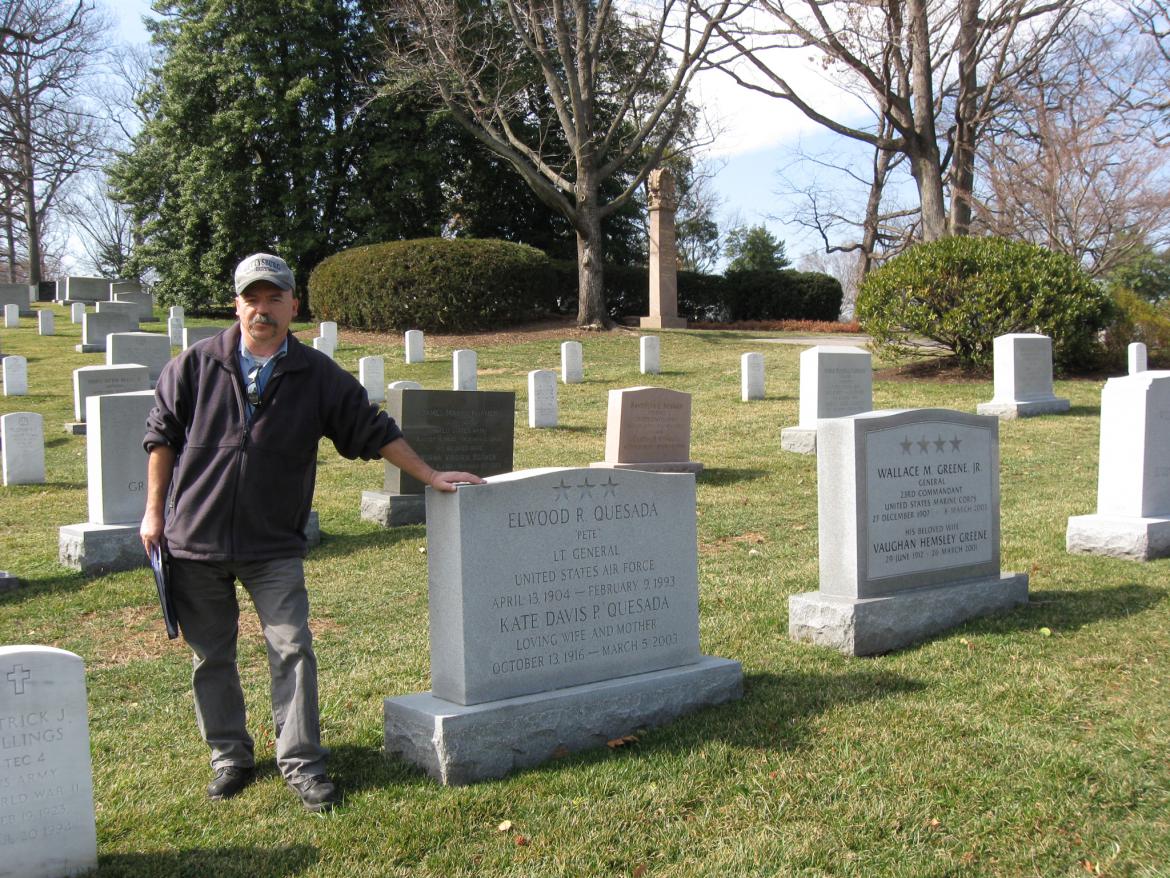 Licensed Battlefield Guide Rich Kohr is in Arlington National Cemetery at the grave of Lieutenant General Elwood Richard “Pete” Quesada (1904-1993). The tall monument in the background marks the grave of President William Howard Taft. Quesada was a quarterback for the University of Maryland before joining the Army, and while an Army Reservist, played baseball for the St. Louis Cardinals. He returned to the Air Service in 1927 and received a Regular Army commission. At a time where others looked to improving the airplane’s strategic bombing capabilities, Quesada concentrated on the tactical application of air power, and began to build the concept of close air support. In December 1942, he was promoted to brigadier general and sent to North Africa to command the 12th Fighter Command. He put his ideas into practice in combat situations, and they evolved into Army Air Forces field regulations “Command and Employment of Air Power,” published in July 1943. At the heart of these regulations is the premise that air superiority is the prerequisite for successful ground operations. In October 1943, Quesada went to England and assumed command of the 9th Fighter Command and readied that unit for the Normandy invasion. He placed forward air observers with divisions on the ground, and they could call for air support. He mounted radios in tanks so ground commanders could contact pilots directly. He pioneered the use of radar to vector planes during attacks. This was particularly helpful during the Battle of the Bulge in December 1944, when bad weather hid many German targets. This view was taken facing northeast at approximately 1:30 PM on Sunday, February 27, 2011.
In Video #87 Licensed Battlefield Guide Rich Kohr shows us the grave of Lieutenant General “Pete” Quesada along with some background information about Quesada’s life. This view was taken facing northwest at approximately 1:30 PM on Sunday, February 27, 2011. 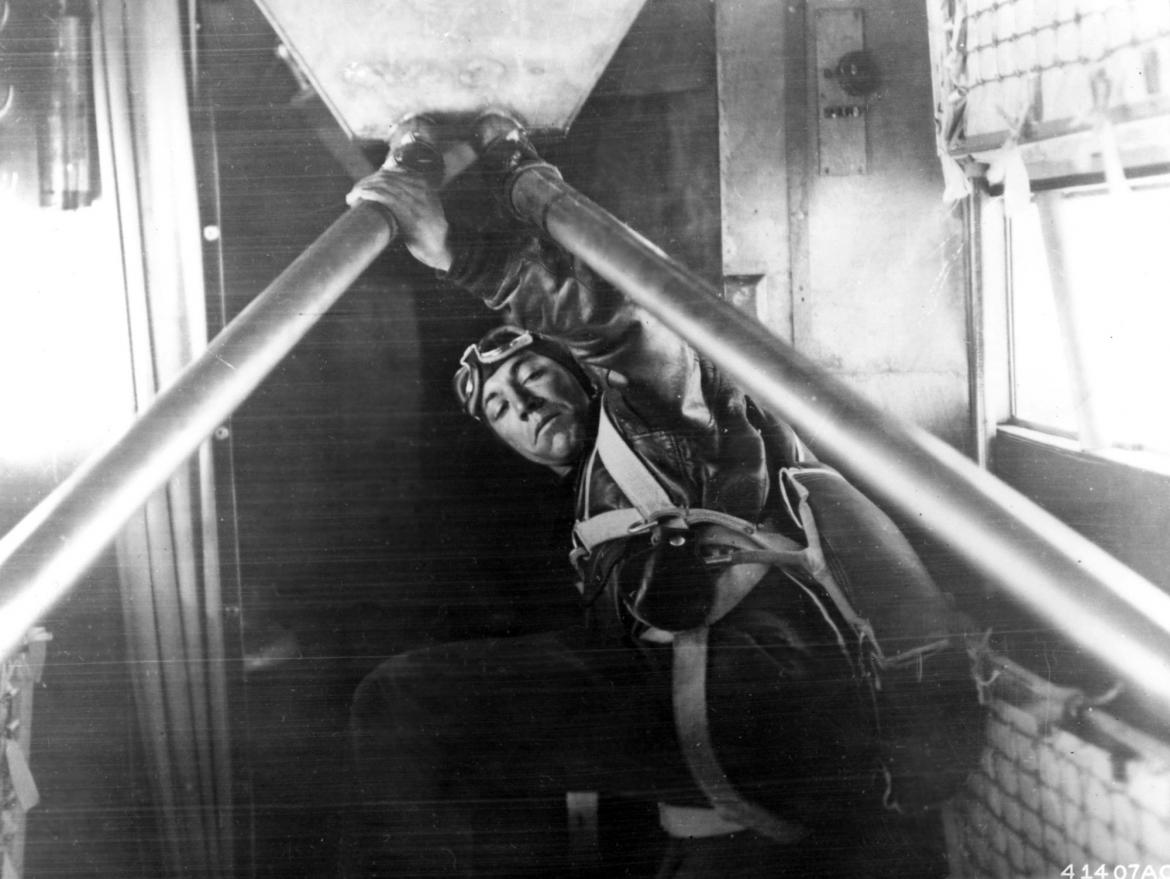 Lieutenant Elwood “Pete” Quesada on board the Question Mark during its historic air refueling operation, adjusting a gas line. After the war, he was the first commander of TAC — the Tactical Air Command. He moved the headquarters from Tampa, Florida, to Langley Air Force Base, Virginia, so it could be close to the headquarters of the Army Ground Forces. When the Air Force became a separate service in 1947, he went along as a lieutenant general. Quesada retired from the Air Force in 1951. He was disillusioned with the emphasis placed on Strategic Air Command at the expense of tactical air. He served as the first head of the Federal Aviation Administration and held positions in private firms. This view, courtesy of the United States Air Force was taken circa January, 1929. 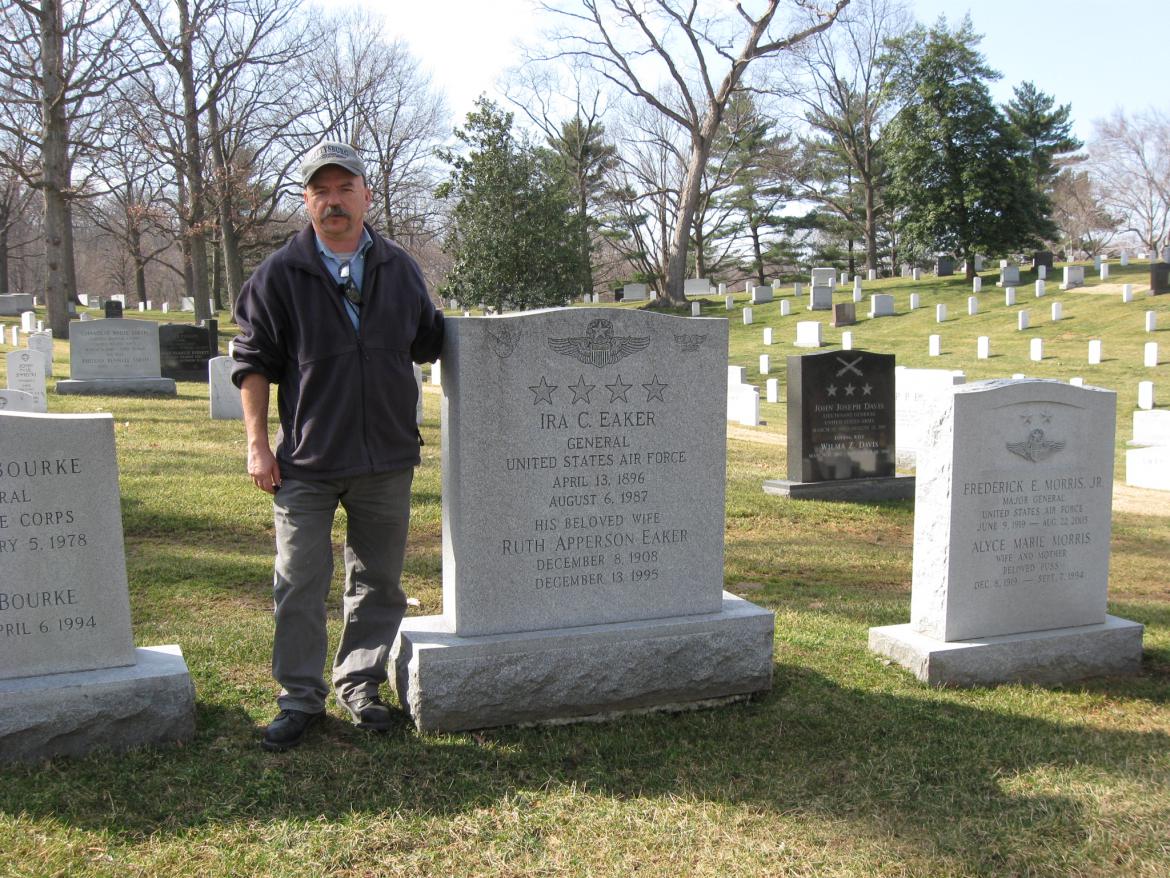 Rich Kohr is in Arlington National Cemetery at the grave of General Ira Clarence Eaker (1896-1987). Eaker was born in Texas and entered the army as an infantryman. He received flying instruction as a pilot in October 1918. From December 21, 1926-May 2, 1927 he served as a pilot of one of the float planes of the Pan American Goodwill Flight that made a 22,000 mile trip around South America. In the summer of 1935 he was on detached duty with the Navy and practiced takeoffs and landings aboard the aircraft carrier USS Lexington. In December 1942, he assumed command of the Eighth Air Force. In a speech he gave to the English that won him favorable publicity, he said, “We won’t do much talking until we’ve done more fighting. After we’ve gone, we hope you’ll be glad we came.” Throughout the war, Eaker was an advocate for daylight “precision” bombing of military and industrial targets in German-occupied territory and ultimately Germany—of striking at the enemy’s ability to wage war while minimizing civilian casualties. As American bomber losses mounted from German defensive fighter aircraft attacks on deep penetration missions beyond the range of available fighter cover, Eaker may have lost some of the confidence of United States Army Air Force Commanding General Henry Arnold. When General Dwight D. Eisenhower was named Supreme Allied Commander in December 1943, he proposed to use his existing team of subordinate commanders, including Lieutenant General Jimmy Doolittle, in key positions. Doolittle was named Eighth Air Force Commander, and Arnold concurred with the change. This view was taken facing northwest at approximately 1:30 PM on Sunday, February 27, 2011.
In Video #88 Licensed Battlefield Guide Rich Kohr shows us the grave of General Eaker along with some background information about Quesada’s life. This view was taken facing southeast to northwest at approximately 1:30 PM on Sunday, February 27, 2011. 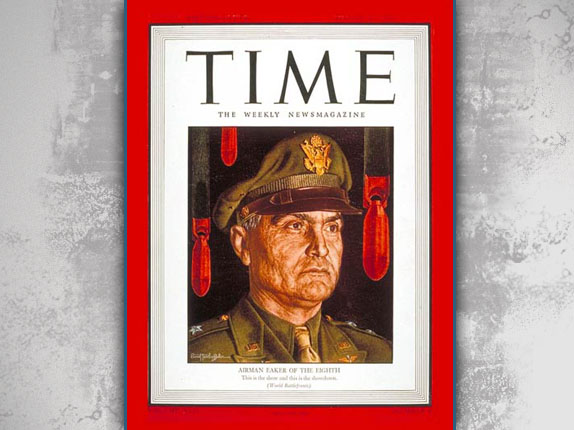 Ira Eaker on the cover of Time Magazine on August 30, 1943. Eaker was reassigned as Commander-in-Chief of the Mediterranean Allied Air Forces, having under his command the Twelfth and Fifteenth Air Forces and the British Desert and Balkan Air Forces. On April 30, 1945, General Eaker was named deputy commander of the Army Air Forces and chief of the Air Staff. He retired August 31, 1947, and was promoted to lieutenant general in the newly established United States Air Force on the retired list June 29, 1948. 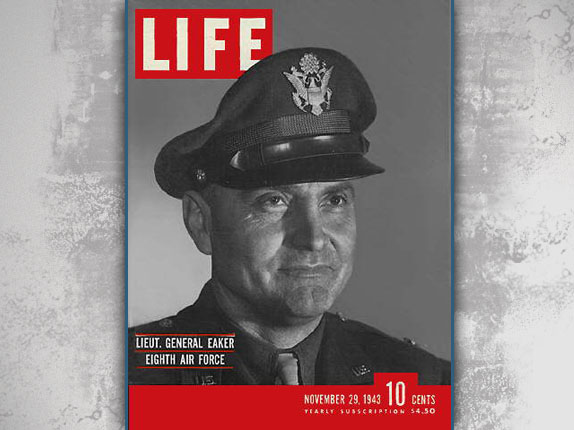 Eaker was on the cover of Life Magazine on November 29, 1943. Almost 40 years after his retirement, Congress passed special legislation awarding four-star status in the U.S. Air Force to General Eaker, prompted by retired Air Force Reserve major general and Senator Barry Goldwater (R-AZ) and endorsed by President Ronald Reagan. On April 26, 1985, Chief of Staff General Charles A. Gabriel and Ruth Eaker, the general’s wife, pinned on his fourth star.