Gettysburg: A History of Vandalism 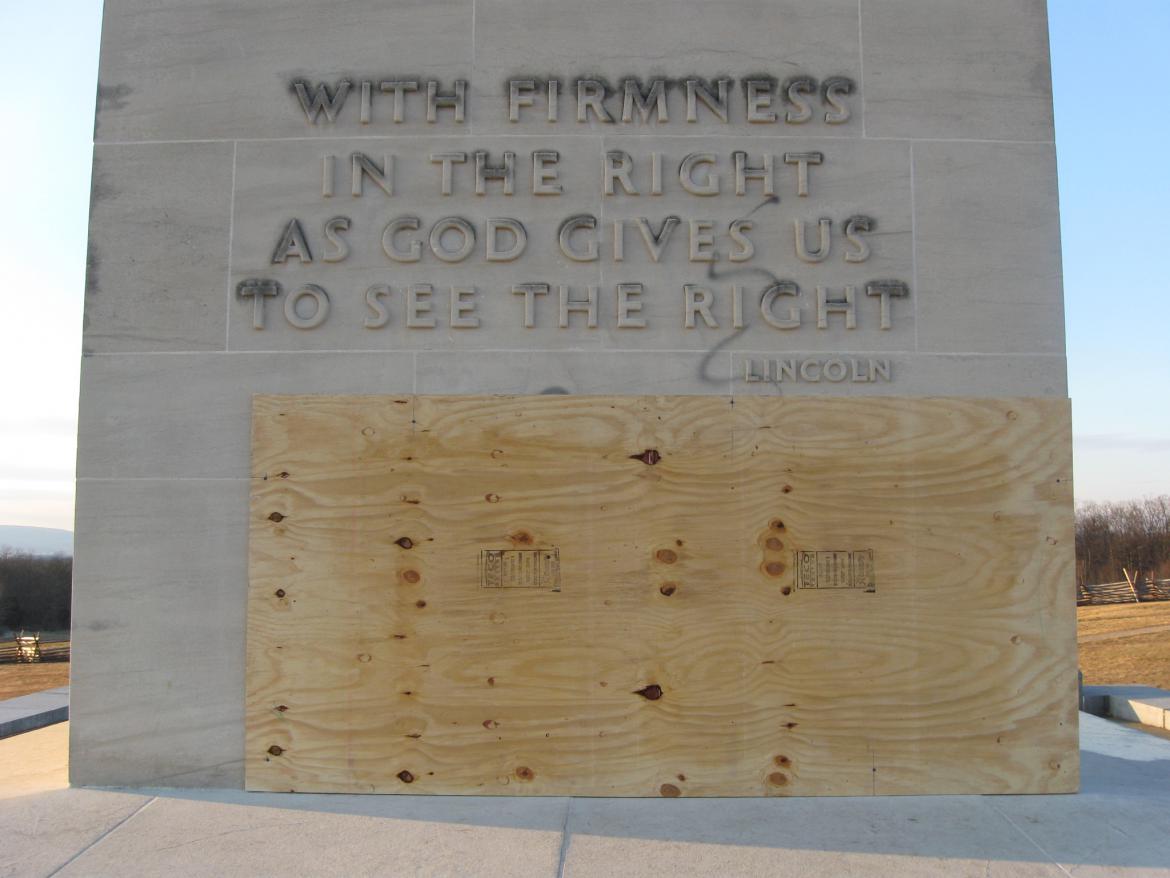 One of the most famous cases of vandalism that has occurred while we’ve ran the Gettysburg Daily was the vandalism of the Eternal Light Peace Memorial on Oak Hill in 2009.

Some of our most popular posts here at the Gettysburg Daily are about the vandalism that occurs within the park. We get a lot of comments on these entries and they spark a fair amount of discussion on the websites and blogs that link to us. Some of that discussion goes like this: “Kids these days! No respect for anything!” Today we’ll examine a very small segment of vandalism that has happened within Gettysburg National Military Park, and illustrate just how common vandalism has been over the years. 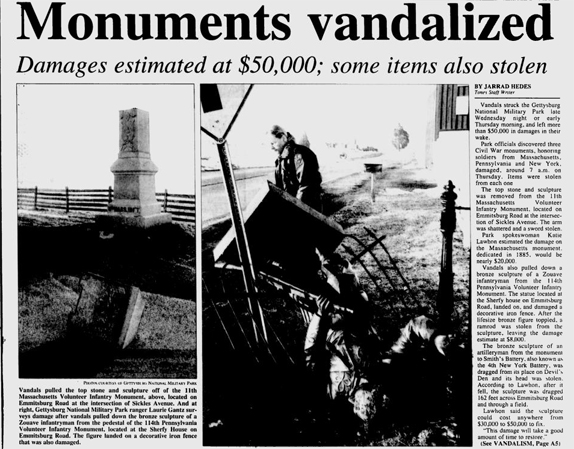 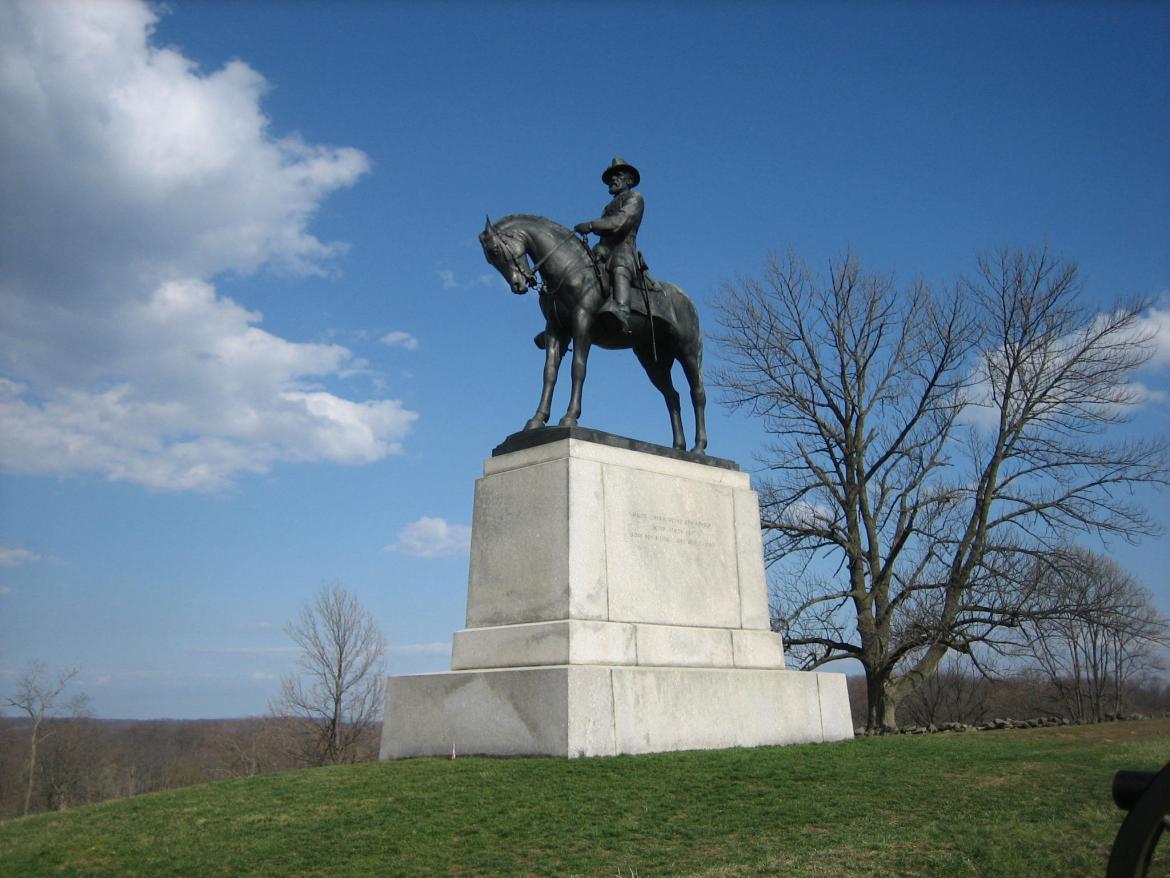 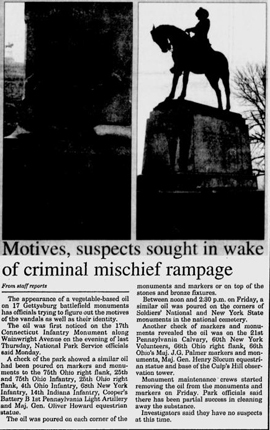 “On Friday, November 19, a similar oil was poured onto the four corners of the Soldiers National Monument and the New York State Monument in the National Cemetery. This discovery prompted a second search for damaged markers. Oil was found on the 21st Pennsylvania Cavalry Monument, the 60th New York Volunteers Monument, the 66th Ohio Right Flank Marker and the marker indicating the falling of Maj. J.G. Palmer of the 66th Ohio, the Equestrian statue of Maj. General Henry Slocum and the base of the observation tower at Culp’s Hill.” This vegetable oil vandalism was committed at Antietam, Shiloh, and Vicksburg as well, by three men from Indiana who said they did it as part of a God-directed ritual to “unite the North and South.” If any of our readers have photos of this vandalism, please send them to us (you can find our email on our about page) so we can include them in this post. [news link] 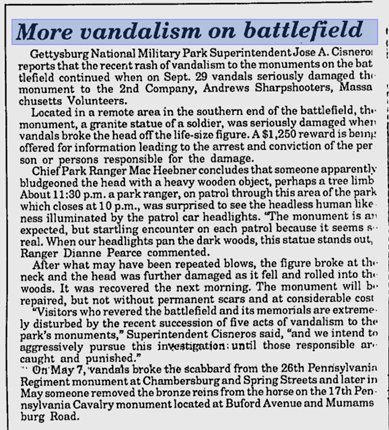 Let’s go back even further. In 1991 Park Superintendent Jose Cisneros reported five acts of vandalism. Among the monuments vandalized were the Andrews Sharpshooters monument (2nd Company, MA Volunteers) — vandals bludgeoned the head off of the statue, and removed the reins from the 17th Pennsylvania Cavalry monument next to the Mummasburg Road. [news link] 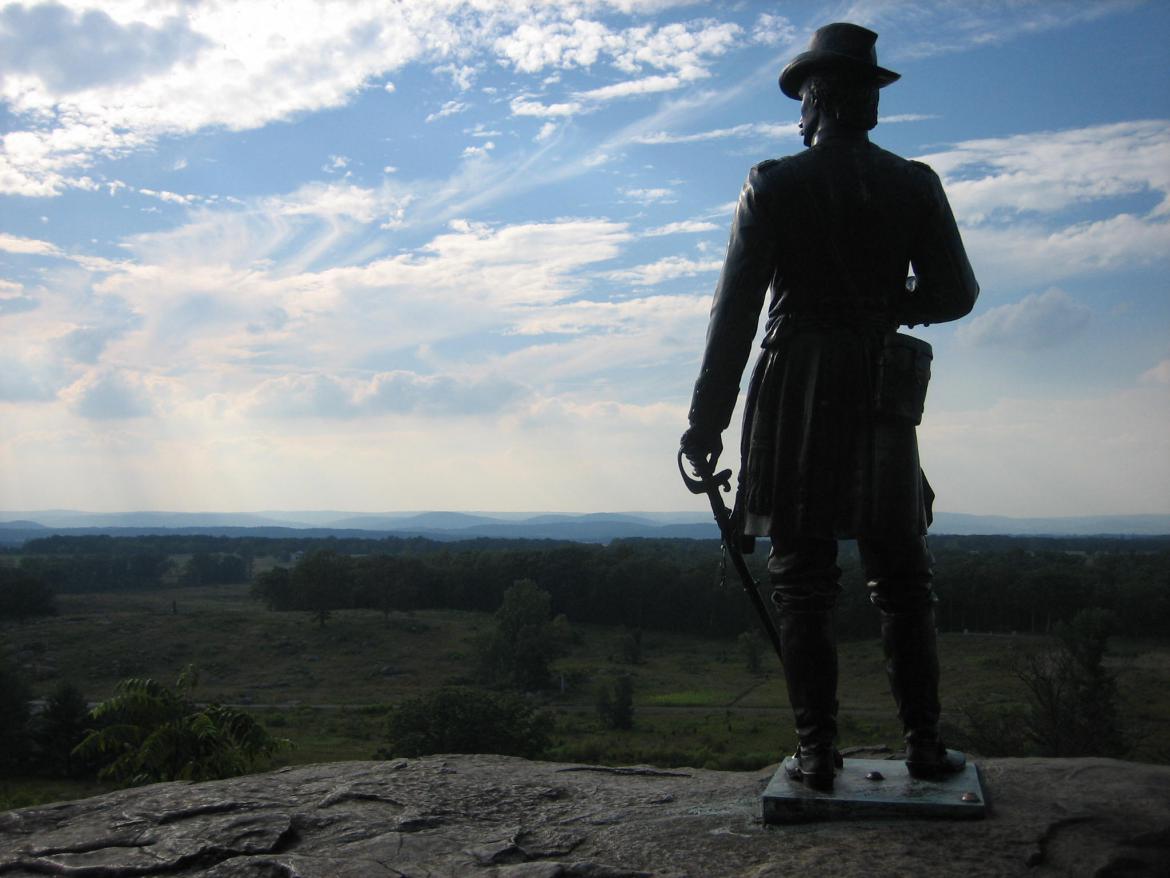 A modern picture of the Warren statue on Little Round Top, taken for our post where we reported on the monument turning green. This view was taken facing southwest at approximately 5:00 PM on Friday, September 5, 2008.

Every month we show you our seasonal panorama from Little Round Top, and each morning that we walk to take that picture, we turn our camera north towards that statue of General Warren. In April of 1963, vandals, who also reportedly did damage to a number of comfort stations around the park, toppled Warren from his boulder, bending his sword and “gouging” his head. [news link] 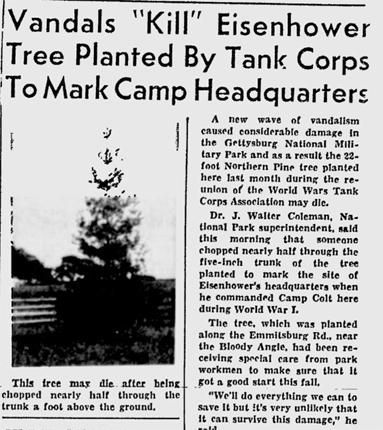 And it hasn’t always been monuments either. As part of a “new wave of vandalism” in September of 1954, the newly planted Northern Pine that marks the spot of Camp Colt, was hacked into by vandals. At the time, the National Park Service believed that it would not survive… [news link] 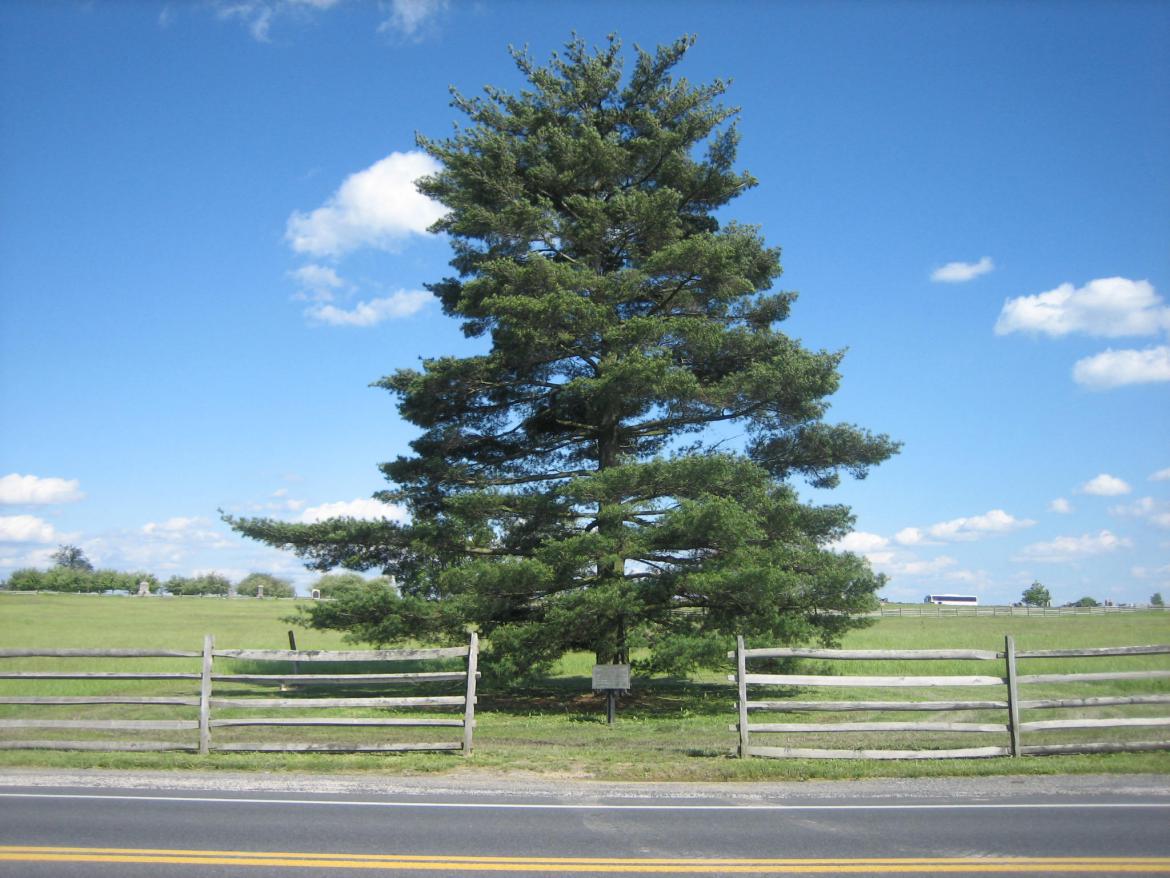 Thankfully that was not the case and the tree is still standing today. This view was taken facing east at approximately 4:30 PM on Thursday, May 22, 2008. 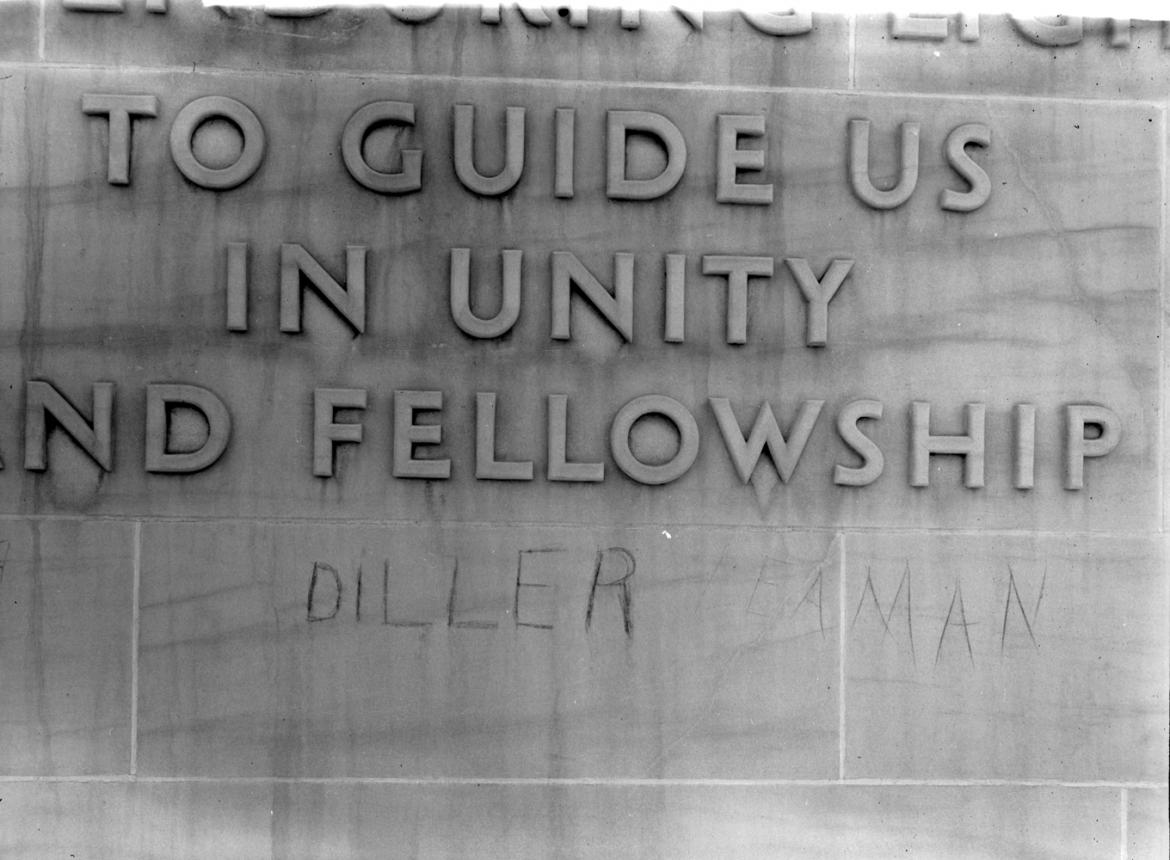 Remember the Peace Light vandalism we started off this post with? This photo, taken on May 17, 1946 is part of a series of photographs that catalog defacement to the monument. Courtesy of the the Center for Civil War Photography, which has more than 1,000 historic Gettysburg Park images like these on their Flickr. 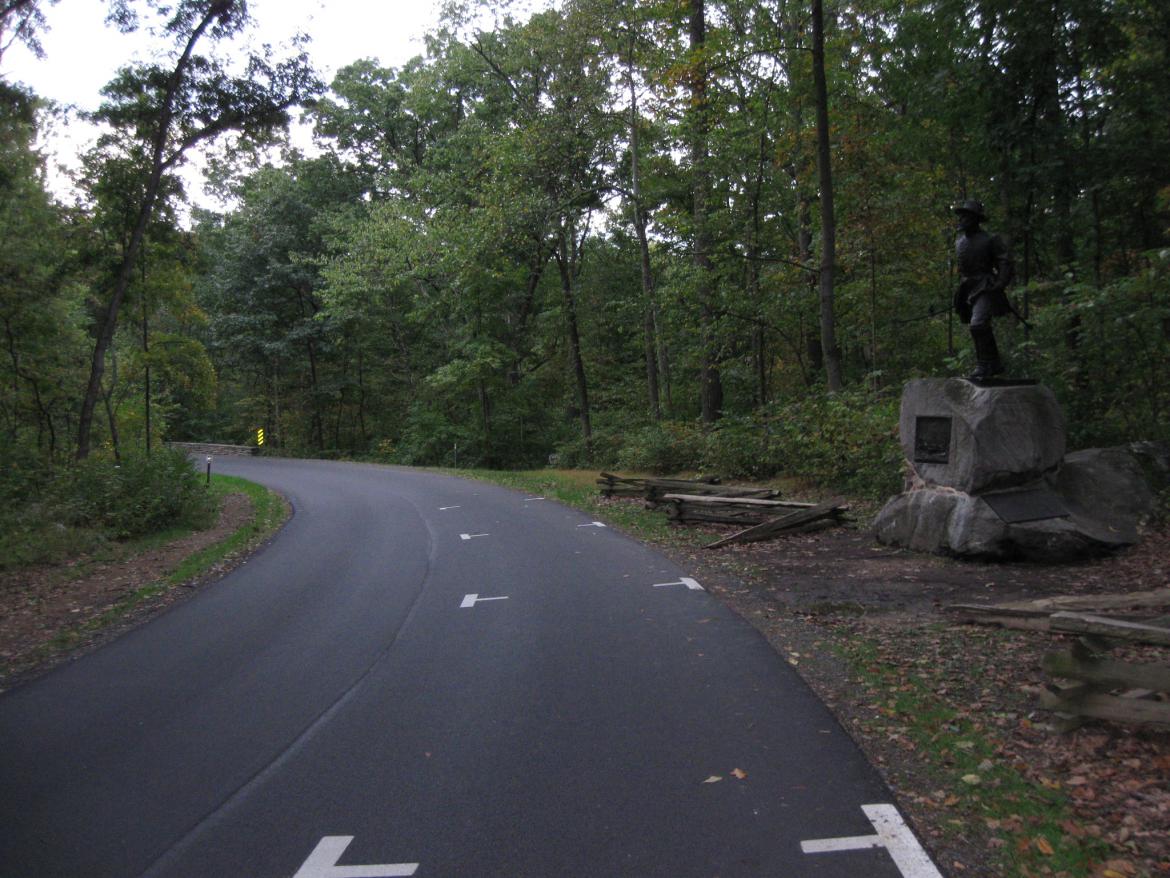 Well, you probably get the idea by now. How far back does the vandalism go? We believe it’s safe to say, that like all other historic locations in the world, vandalism is an unfortunate given. We found many many more cases of vandalism than these within Gettysburg National Military Park simply going through the Gettysburg Times archive. But we’ll leave you with this final case — On the right of this photograph is the William Wells statue … This view was taken facing southwest at approximately 5:45 PM on Friday, September 19, 2008.

… In 1917 vandals “mutilated” the cast in the rock at the base of the monument depicting Farnsworth’s Charge. In the article it’s stated that this was “the most recent mark for vandals,” implying of course, that vandalism in the park … Well, let’s just say that it was nothing new. And how did they fix the vandalism? The National Park Commission “had the damaged plate removed and sent it to the studios where it was originally made.” Today those studios no longer exist, making it much more difficult to find replacement parts for 120 year old monuments. And who discovered that vandalism of the William Wells monument that August weekend in 1917? “Henry Rhine, battlefield guide, was taking a party over the field this morning and was the first to see it.” [news link] 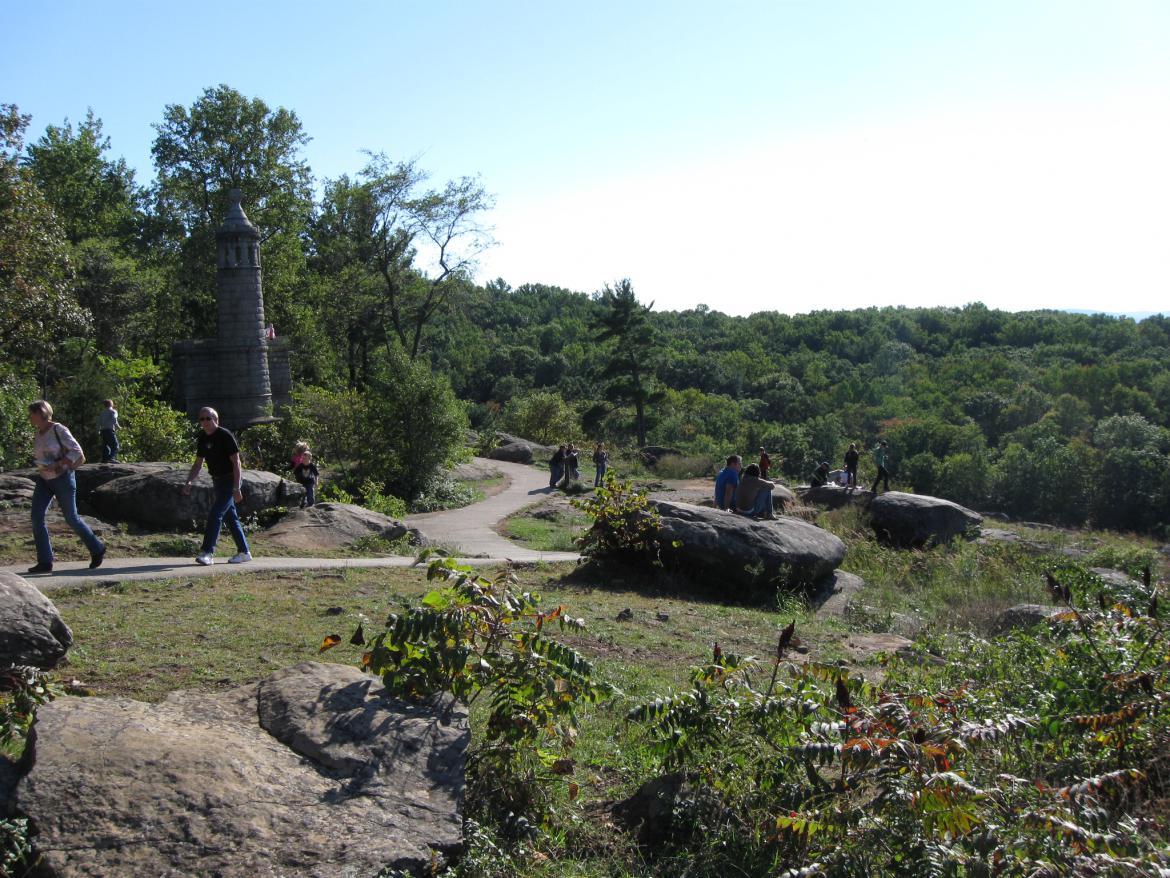 Even though vandalism has happened, happens, and will continue to happen, this is no reason to become complacent. We hope that the National Park Service will increase its efforts to prevent vandalism and to repair/clean it swiftly after it occurs. And our readers are certainly proof that volunteers are out there to help in the continued preservation and protection of our national resource. This view was taken facing southwest at approximately 4:30 PM on Saturday, October 2, 2010.