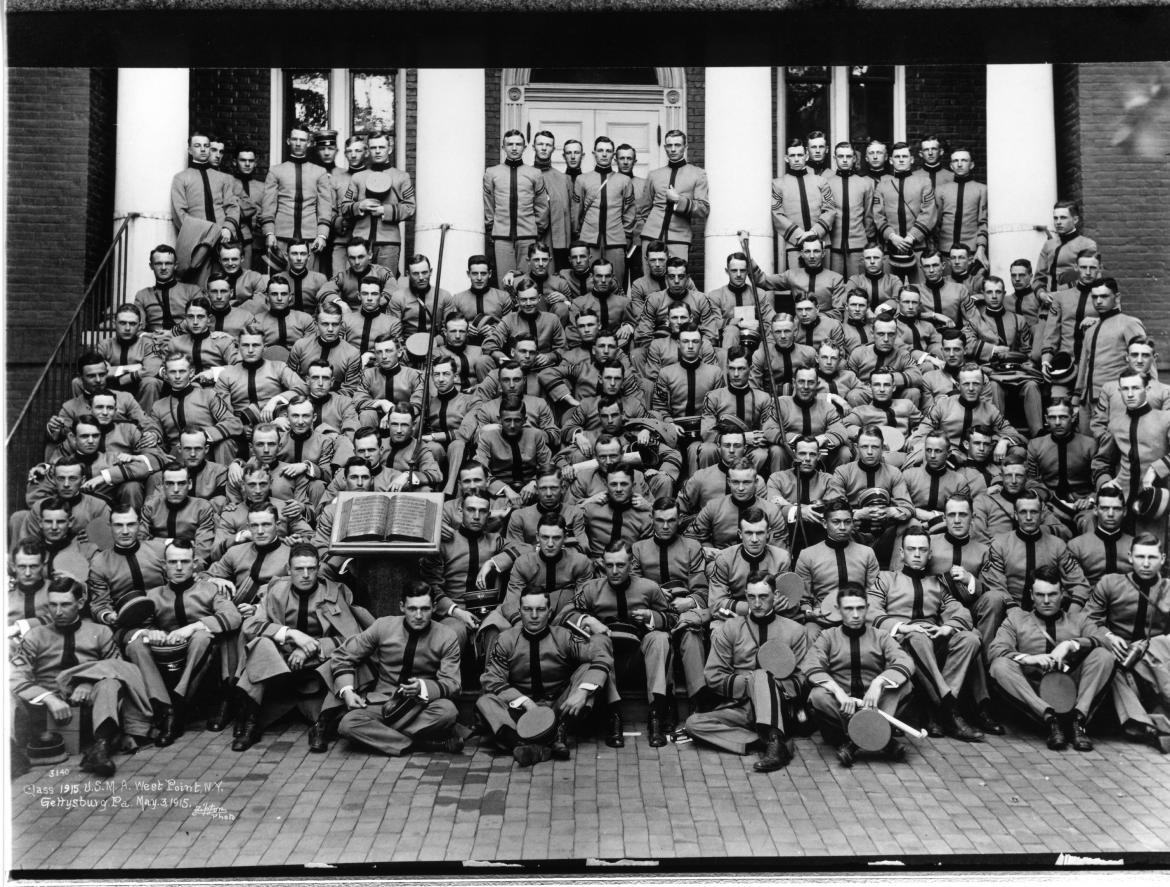 This is West Point’s Class of 1915, also known as “The Class the Stars Fell On.” Of the 164 graduates, 59 earned at least one star (attained the rank of General), the most of any class in the history of the United States Military Academy at West Point, New York. Two reached the second highest rank, five-star General of the Army (General of the Armies being the highest). In addition, there were two four-star “full” Generals, seven three-star Lieutenant Generals, 24 two-star Major Generals and 24 one-star Brigadier Generals. The two five-star Generals were Dwight Eisenhower and Omar Bradley, and they are both part of the approximately 130 cadets sitting/standing on these steps. The next best “star” showing was by the Class of 1917, with 43 general officers. See if you can find Eisenhower and Bradley. We have circled them in a view after our video map. To download the uncompressed TIFF version of this photograph, click here (37.1 MB). This photograph was taken by William Tipton’s Gallery, and is courtesy of Christ Lutheran Church. This view was taken facing south around noon on May 3, 1915.

Christ Evangelical Lutheran Church is the oldest structure in Gettysburg continuously used as a Church. It was founded in 1835 to be the English speaking Lutheran Church in Gettysburg (St. James Lutheran Church, in existence since 1789, conducted its services in German), and to be the primary assembly hall for the Lutheran Theological Seminary and for Pennsylvania (Gettysburg) College. In our first post, Pastor Stephen R. Herr and Dr. Conrad B. Richter showed us some exterior parts of the structure and the narthex. In our second post, we saw some of the nave, or central part of the church, and we discussed the church’s roll during the battle. In today’s post we will look at a picture of West Point’s Class of 1915 sitting on the steps of Christ Lutheran, observe some stained glass windows, and stand in the church area used as an operating room during and immediately following the Battle of Gettysburg. 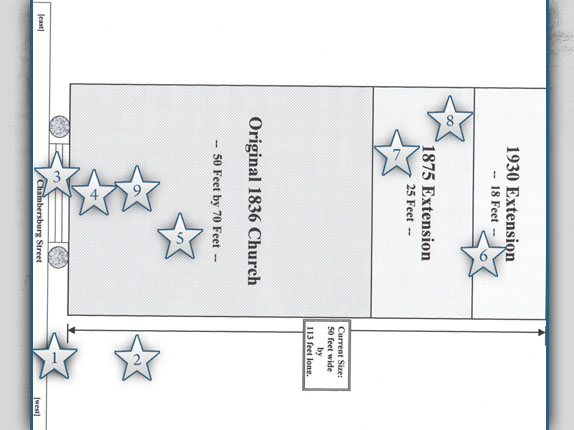 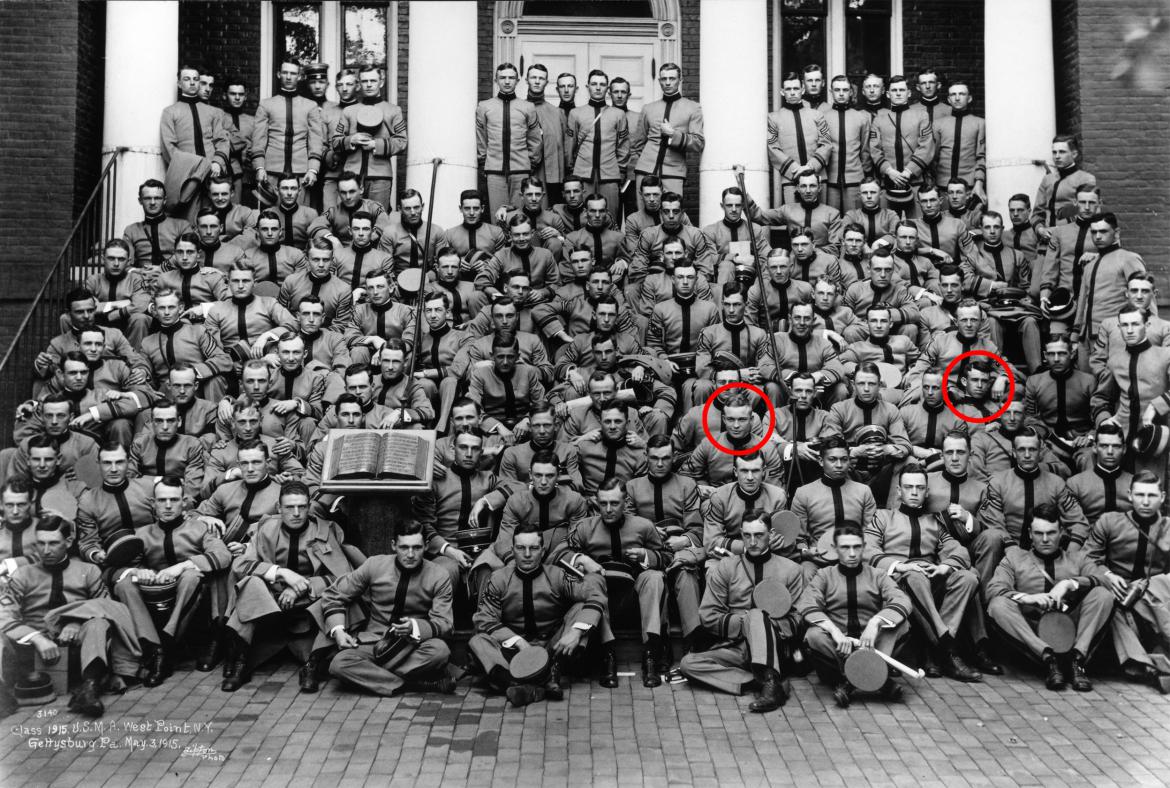 We have circled Eisenhower on the left and Bradley on the right. If someone knows others in this photograph, then please email us. The four-star (“full”) Generals in the class of 1915 were James Van Fleet and Joseph T. McNarney. The three-star (Lieutenant Generals) Generals were Henry Aurand, Hubert R. Harmon, Stafford LeRoy Irwin, Thomas B. Larkin, John W. Leonard, George E. Stratemeyer, and Joseph M. Swing. This view was taken facing south around noon on May 3, 1915. 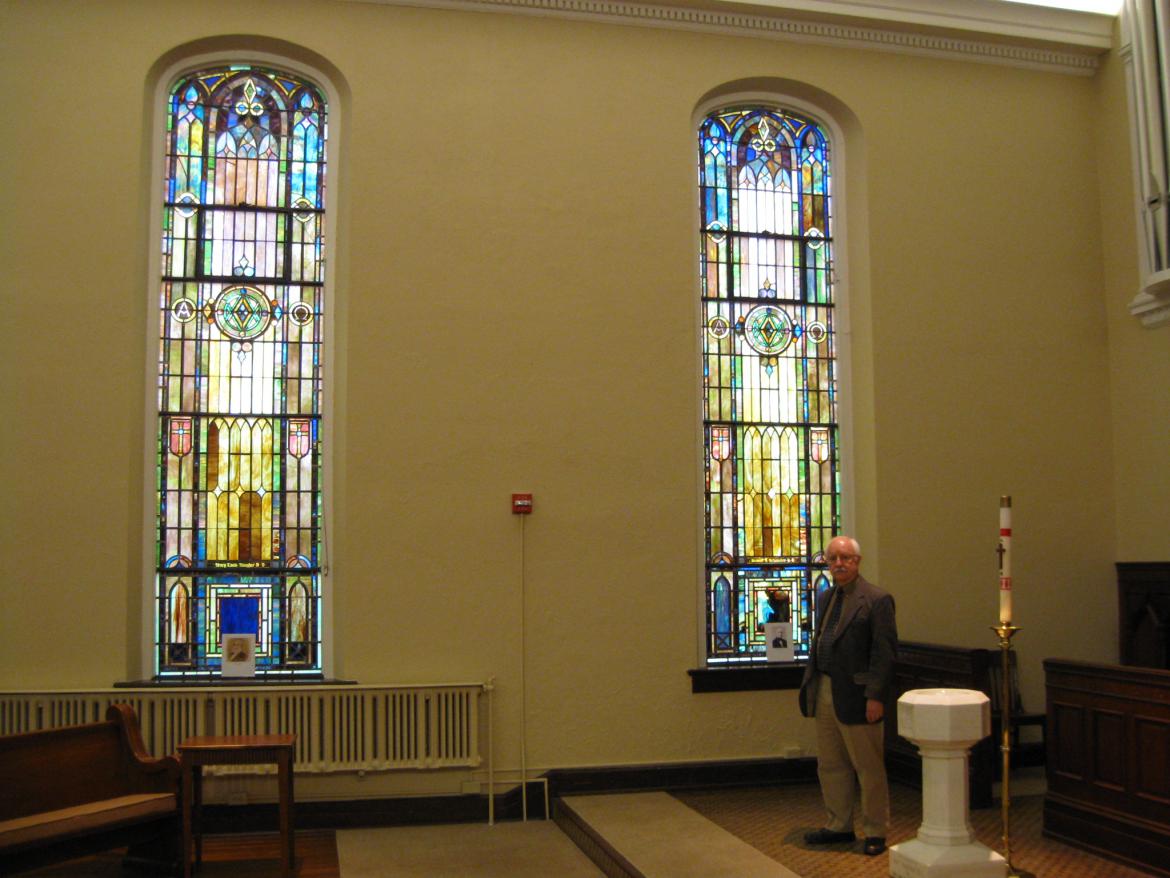 Christ Lutheran Church member Dr. Conrad Richter is standing by two of the 14 stained glass windows in the church building. The window on the right is in memory of Samuel Simon Schmucker, one of the founders of the Lutheran Theological Seminary, Pennsylvania (Gettysburg) College, and Christ Lutheran Church. The window on the left is to Henry Louis Baugher, the President of Pennsylvania (Gettysburg) College during the American Civil War. This view was taken facing southeast at approximately 5:45 PM on Tuesday, March 31, 2009.
Get the Flash Player to see this player.
In Video #8 (Videos #1-7 were seen in our previous Christ Lutheran posts, Dr. Conrad Richter explains how the stained glass windows were funded, and points out some other objects in the sanctuary. This view was taken facing southeast to north to south at approximately 5:45 PM on Tuesday, March 31, 2009. 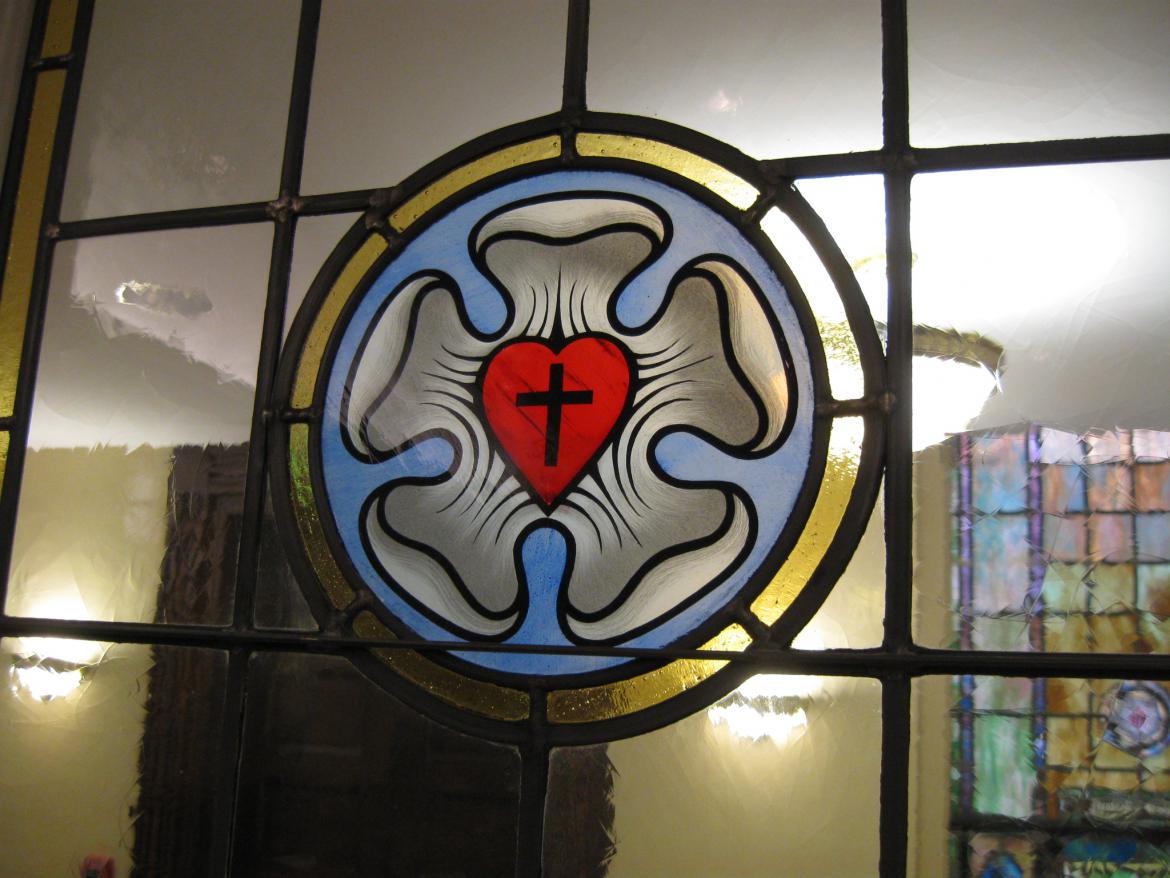 The Luther seal or Luther rose, which Dr. Richter mentioned in Video #8 is a widely-recognized symbol for Lutheranism. It was the seal that was designed for Martin Luther at the behest of Prince John Frederick, in 1530, while Luther was staying at the Coburg Fortress during the Diet of Augsburg. Lazarus Spengler, to whom Luther wrote his interpretation below, sent Luther a drawing of this seal. Luther saw it as a compendium or expression of his theology and faith, which he used to authorize his correspondence. Luther informed Philipp Melanchthon on September 15, 1530 that the Prince had personally visited him in the Coburg fortress and presented him with a signet ring, presumably displaying the seal. This view was taken facing northwest at approximately 5:45 PM on Tuesday, March 31, 2009. 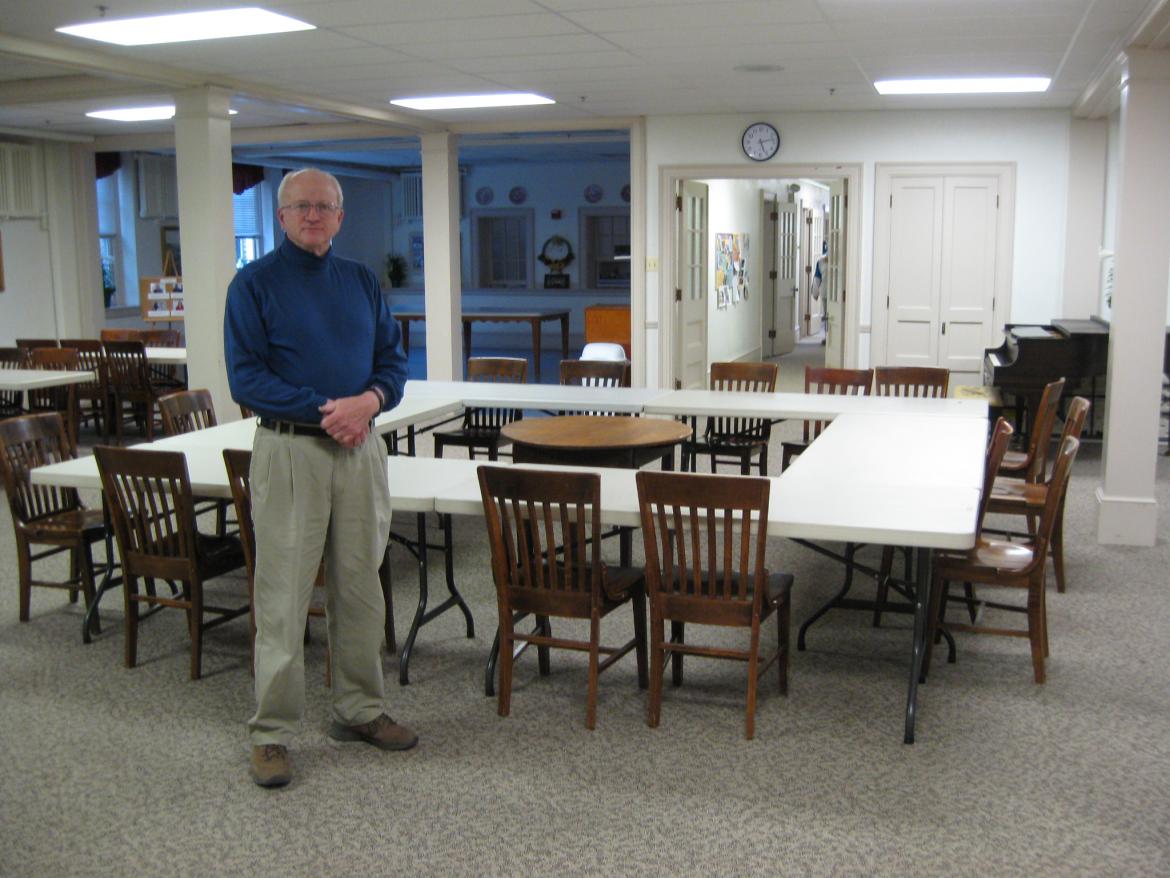 Church member Thomas A. Laser will show us around the “basement” room (also known as the “lecture room” or the “vestry”) which was used as an operating room during the battle. Tom is a native of Shelby, Richland County, Ohio. He graduated from THE Ohio State University in 1960 (management), and Michigan State University in 1967 (MBA). Tom served as an officer in the U. S. Air Force from 1961 through 1981, primarily in information technology. For the last six years he has served in the Pentagon on the staff of the secretary of the Air Force. Tom is married to the former Sara Seaman of Shelby, Ohio, and they have two children. They settled in the Gettysburg area in 1987, and he currently works part-time as a process engineer. This view was taken facing southeast at approximately 5:30 PM on Thursday, April 23, 2009. 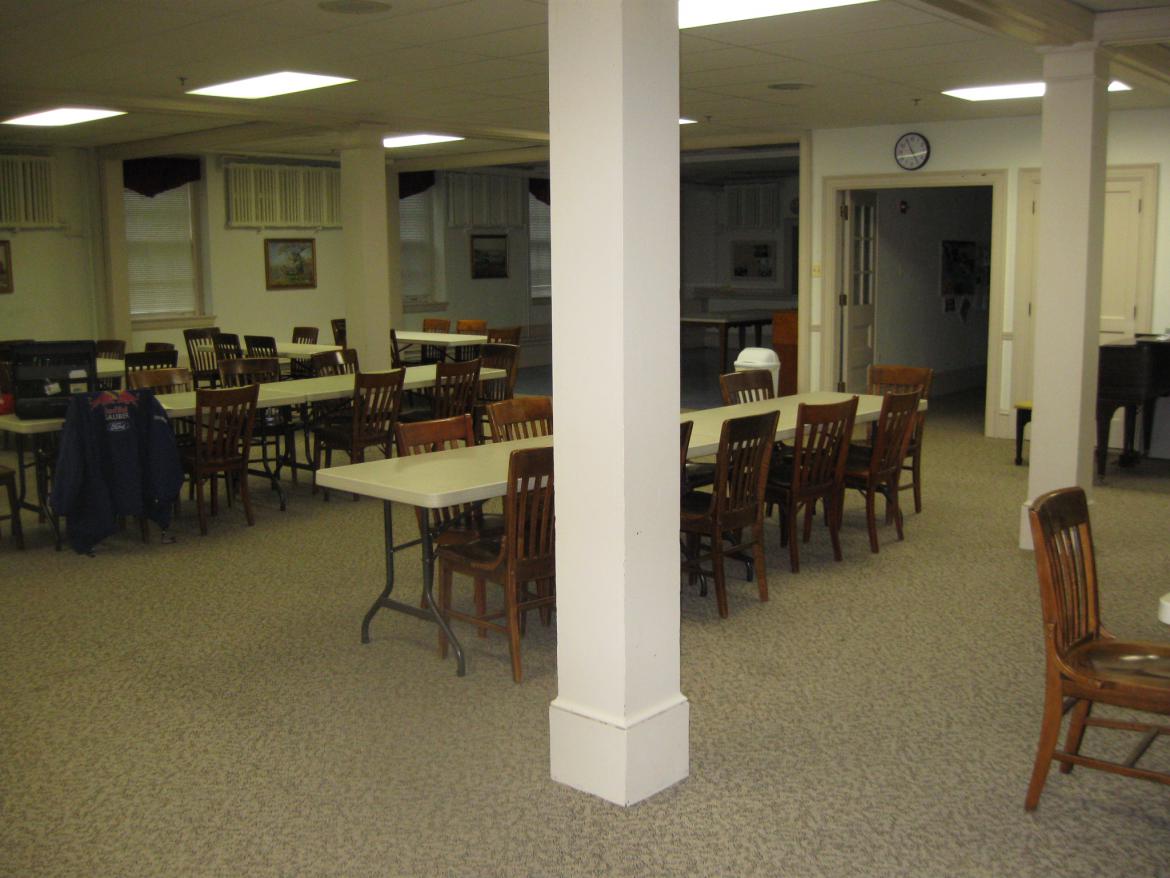 It appears that during the battle there were two rooms in this area, the “main hall” and an “anteroom.” In the anteroom is where the surgeries were performed. This view was taken facing southeast at approximately 5:15 PM on Thursday, March 26, 2009. 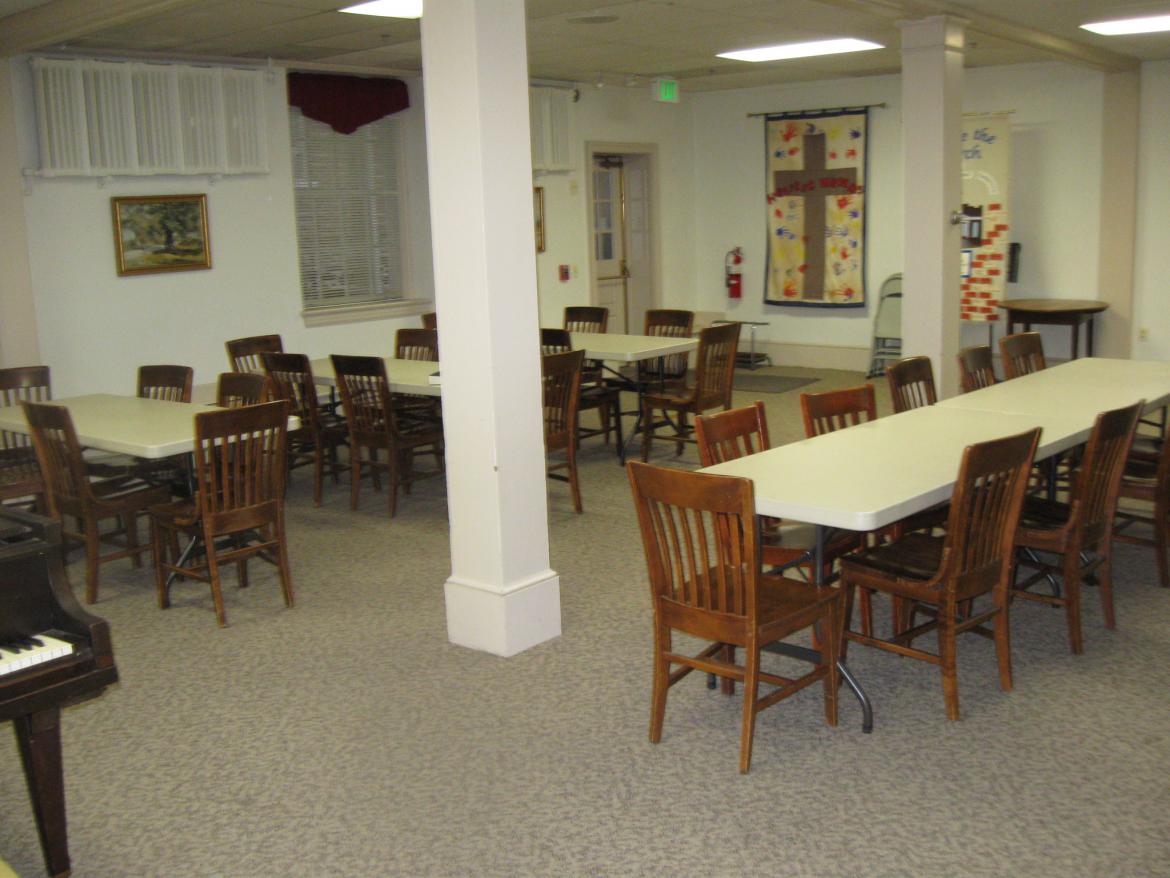 Melvin Walker of the 13th Massachusetts Infantry Regiment stated that on July 1, 1863, “An operating table was placed in an anteroom opening off the Main hall and here our Surgeon worked with knife and saw without rest or sleep, almost without food, for 36 hours before the first round had been made…A Confederate guard was placed over the hospital, but otherwise we were left to ourselves.” This view was taken facing northwest at approximately 5:15 PM on Thursday, March 26, 2009. 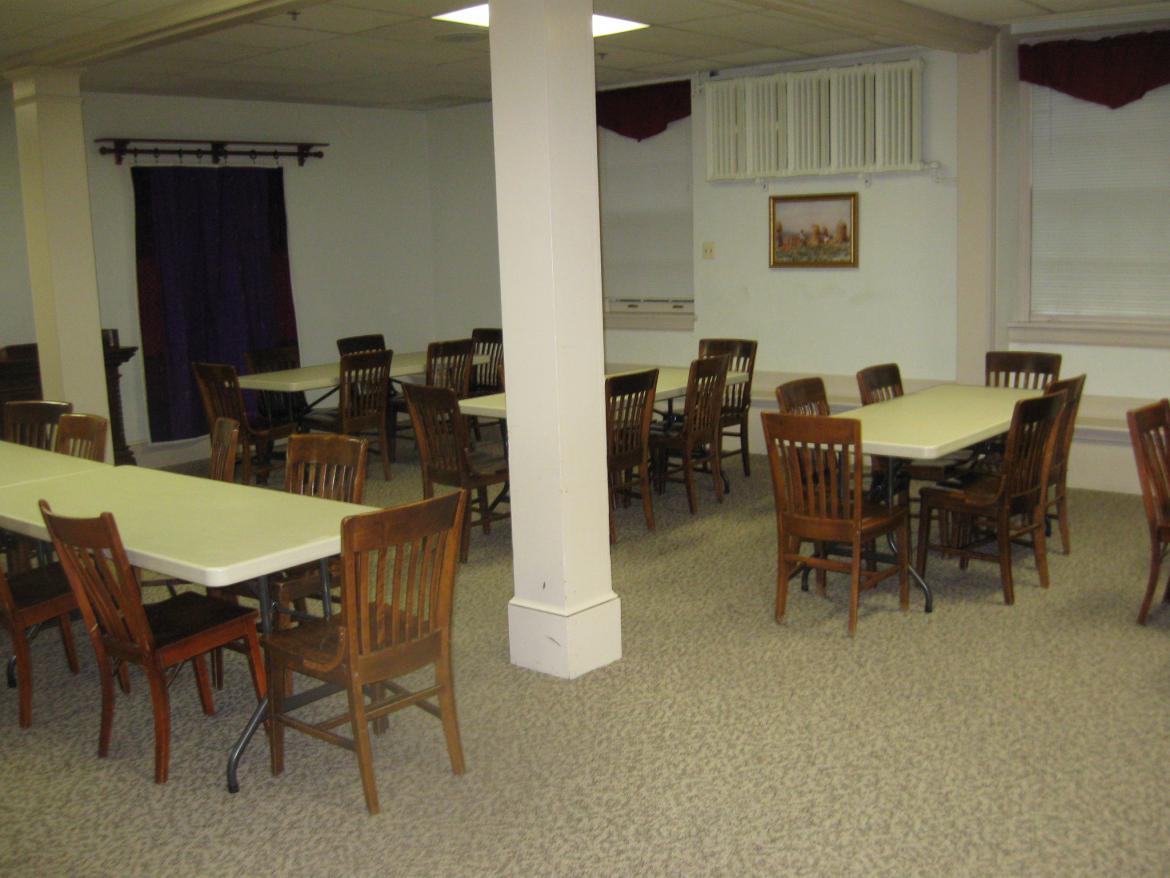 Melvin Walker continued his story of being in this room on July 1, 1863: “After the surgeons’ work was done we had no care save such as the few less seriously wounded comrads [sic] could give… The first night 23 dead were carried from our room…” This view was taken facing northeast at approximately 5:15 PM on Thursday, March 26, 2009. 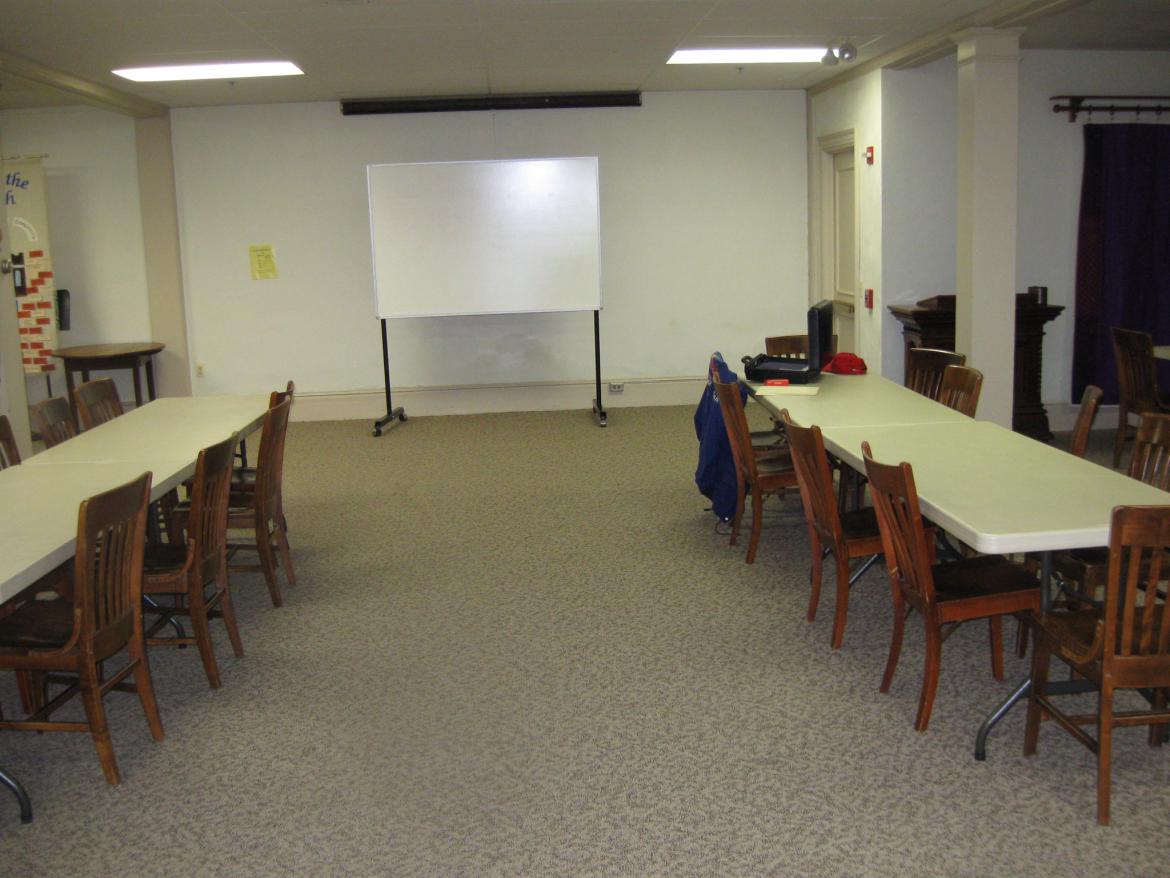 Austin Stearns of the 13th Massachusetts was also in this room the night of July 1st, and he probably spoke to the same worn out surgeon that Walker saw. “It was now dark and it was with difficulty that I made my way around. Going down into the vestry, I found the surgeon busy and quite a number of Company K men. I asked him if he could just look at a man up stairs; he said he would but he must attend to his own men first. I told him this was one of his men. It being dark he had not recognized me at first. We went up stairs and he looked at the wound and told me to keep it wet with cold water, as that was all he could do till morning. I had already wet it. Some tallow drips had been brought in and we had quite good light.” This view was taken facing north at approximately 5:45 PM on Tuesday, March 31, 2009.

Gettysburg resident Charles McCurdy stated that “Surgeons were at work under very rude conditions…The Church yard was strewn with arms and legs that had been amputated and thrown out of the windows…” Tom is standing by the windows out of which it is believed that the arms and legs were thrown. This view was taken facing southwest at approximately 5:15 PM on Thursday, March 26, 2009.
Get the Flash Player to see this player.
Tom Laser shows us around the vestry/operating room, and also explains this room’s purpose during World War I.