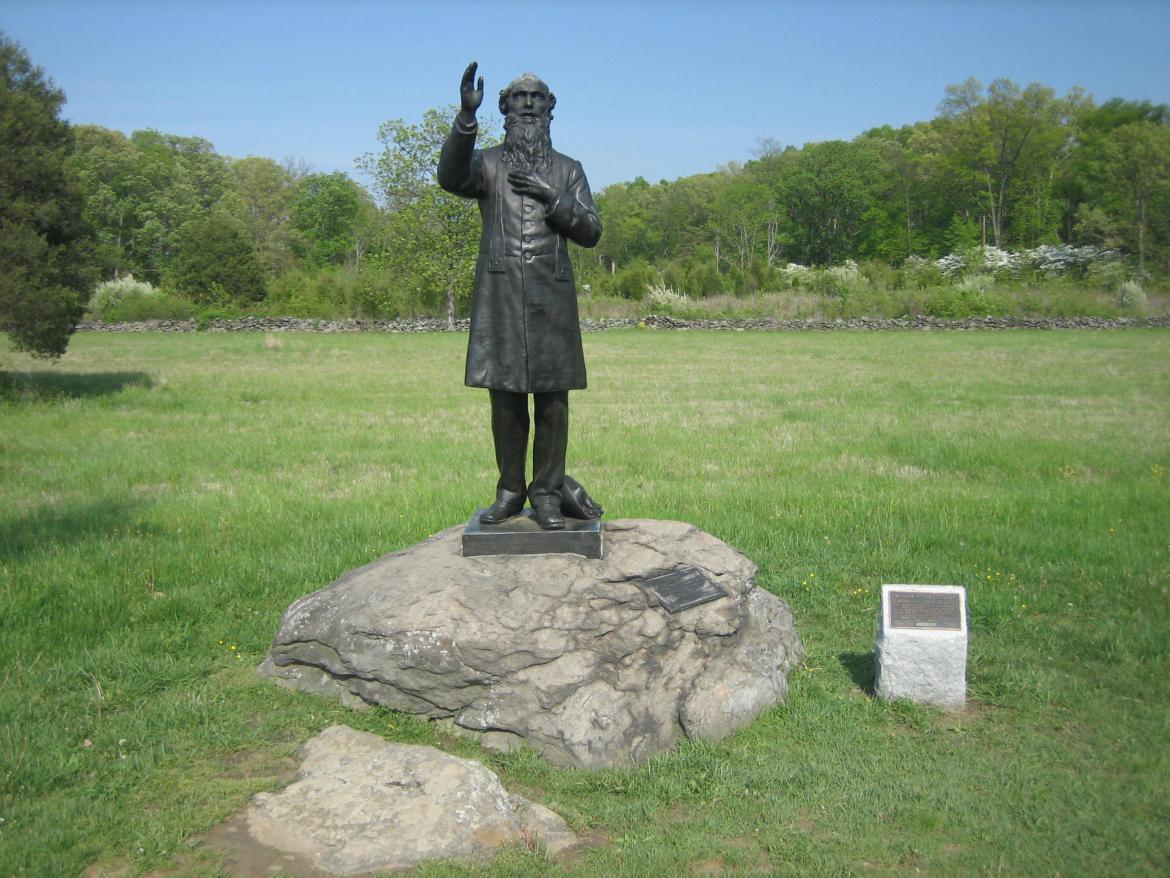 On the afternoon of July 2, 1863, the Irish Brigade, located on Cemetery Ridge was preparing to go into action at The Wheatfield. Father William Corby asked permission to speak to the men. Stepping upon a boulder, he called upon God to grant the men couraged, then pronounced a general conditional absolution. He warned the soldiers that his forgiveness of their sins was only good to soldiers who would do their military duty. This view was taken from the west facing east at approximately 4:30 PM on Wednesday, May 7, 2008.

Father William Corby was the Chaplain of Irish Brigade’s 88th New York Infantry Regiment, and later President of the University of Notre Dame in South Bend, Indiana. The Gettysburg Daily visited his monument along Cemetery Ridge on the east side of Hancock Avenue.

William Corby was born in Detroit, Michigan on October 2, 1833. His father was a real estate dealer. After working in real estate for a few years, William desired to become a priest, and entered Notre Dame in 1853. Corby took his final vows in 1859. This view was taken from the south facing north at approximately 4:30 PM on Wednesday, May 7, 2008.

Seven Notre Dame priests, including Corby, joined regiments with the Union Army. After the war, Corby returned to Notre Dame and served his first term as president from 1866 to 1872. His second term as president was from 1877 to 1886. During this second term he was instrumental in rebuilding the university after a devastating fire. Corby died of pneumonia on December 28, 1897. This view was taken from the east facing west at approximately 4:30 PM on Wednesday, May 7, 2008.

The Catholic Alumni Association raised funds for this monument dedicated on October 29, 1910. It was mounted on what some recalled was the exact boulder where Corby had stood on July 2, 1863. The sculptor was Samuel Murray. An identical copy of the statue was placed on the Notre Dame campus in 1911 where it is referred to as “Fair Catch Corby.” This view was taken from the northwest facing southeast at approximately 4:30 PM on Wednesday, May 7, 2008.