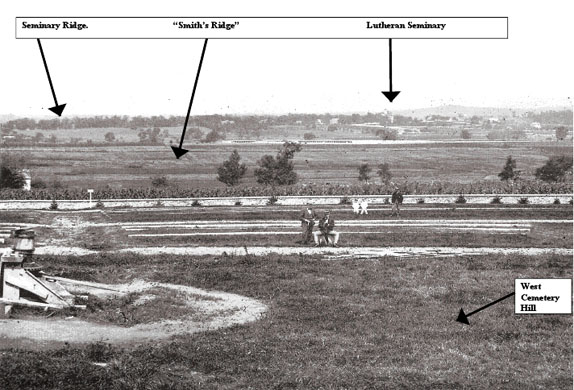 The area of Smith’s Ridge as seen from the National Cemetery on Cemetery Hill. This image by Tipton and Myers, taken facing northwest circa 1869, is courtesy of Stuart Dempsey.

In today’s Eleventh Corps post, Gettysburg Licensed Battlefield Guide Stuart Dempsey continues to show positions occupied by soldiers from Orland Smith’s Brigade in and around an area Stuart has designated as “Smith’s Ridge.” 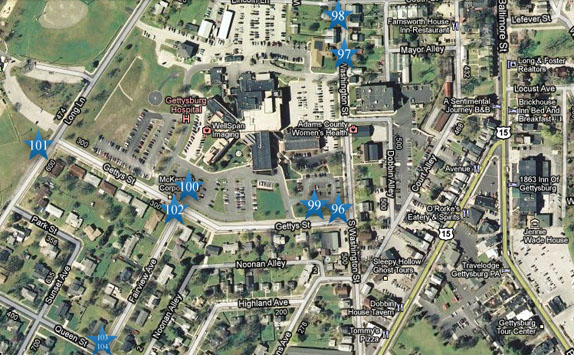 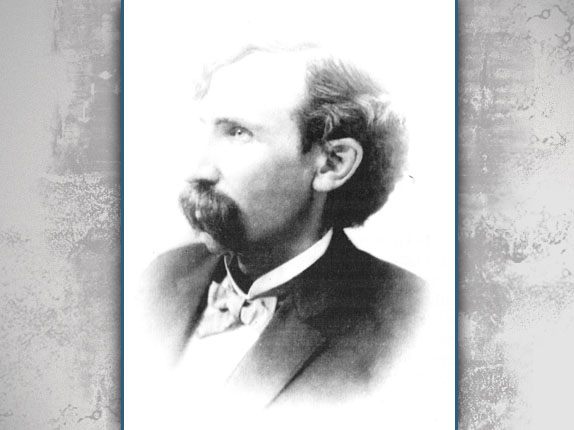 This post-war photograph is of Private George Metcalf of the 136th New York. The following is his account of his action on Smith’s Ridge: “The order was renewed and we again started [forward]. This time with a full realization that danger was ahead in the shape of a strong skirmish line of rebels. We started for them on a run, yelling at the top of our voices. I remember placing the butt of my gun in front of my face and holding my trusty old frying pan and knapsack up, so as to stop any unfriendly bullet that might be calling my way. I ran down the line of a board fence, or rather what had been a board fence, for nothing but the posts stood now. As I hurried along I heard the rifle balls strike these posts and expected every second to be taken for a post and killed. We ran about sixty rods forward, but before we had gone half that distance, the first line of rebel skirmishers broke and ran before us. I saw about ten rods ahead of me, a rail pile made into a sort of breastwork. I made up my mind to reach this pile and stop whether the rest of the company did or not, for the bullets came too thick to expect to escape for much longer. I ran or tried to run as I never ran before. It seemed I would never reach the place, and in my anxiety to get there, my head wanted to go faster than my feet could carry it. As a result, I fell forward when within ten feet of the rail-pile. As I fell, my cheek struck the leg of a dead man who had been stripped of his clothes … I was going so fast that when I fell on my face I slid the whole length of this dead body, and a sort of slimy matter peeled off and stuck to my face. I found myself now with two other comrades who put in their appearance at about the same time I did, and three dead men behind this pile of rails, which was about two feet high. … I counted out fifty-four [percussion] caps and laid them on a rail, so as to be handy when loading, for I did not dare rise over the top of the rail-breastwork to load, so loaded my gun lying on my back. … … I began to load and shoot, and the two comrades with me did the same. I took deliberate aim and discharged my gum 53 times – at a rebel every time. We three would shoot together, often by calling “One, Two – fire,” and watch for the result. Whether we actually hit anyone or not, we could not tell.”The image and account are courtesy of Stuart Dempsey.