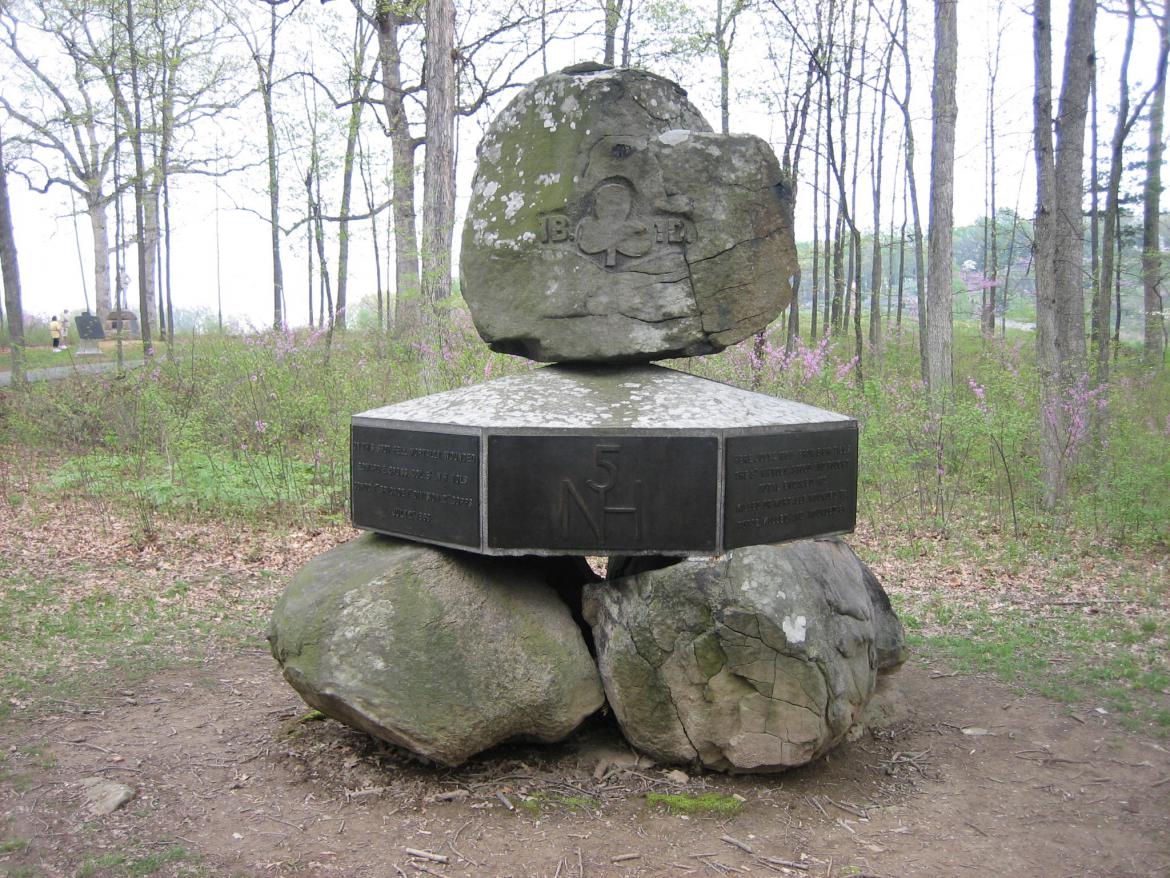 The front side of the 5th New Hampshire Monument. The regiment was part of Colonel Edward Cross’ First Brigade, Second Division, Second Corps. Before becoming a brigade commander, Cross had been the 5th New Hampshire’s Colonel. This view was taken from the west facing east at approximately 4:30 PM on Saturday, April 26, 2008.

The monument to the 5th New Hampshire Infantry Regiment is located in the woods on the east side of Rose’s Wheatfield, and along Houck’s Ridge, north of Devil’s Den. The monument is known for its design of having a boulder balanced on other boulders. The boulders were taken from the battlefield. It marks the location where Colonel Edward Cross was killed on July 2, 1863.

Colonel Edward Cross had been wounded 12 times previous in his military career. As he approached Pennsylvania he had a premonition that his next battle would be his last. As his men prepared to move to the Wheatfield area on July 2, his corps commander, Winfield Scott Hancock approached Cross to tell him he should do very well and win his star and be promoted to Brigadier-General after the battle. Cross replied, “No General, this is my last battle.” This view was taken from the south facing north at approximately 4:30 PM on Saturday, April 26, 2008.

Cross was correct. The rest of the brigade was north of the 5th New Hampshire, with most of the regiments in the Wheatfield. Cross came to the woods to his old regiment when a Confederate, behind a large boulder 50 yards away, shot Cross in the abdomen. He was taken to a field hospital and placed on sheaves of wheat. Some of his last words were, “I did hope I should see peace restored to our distressed country. I think the boys will miss me. Say goodbye to all.” This view was taken from the east facing west at approximately 4:30 PM on Saturday, April 26, 2008.

The 5th New Hampshire went into action at Gettysburg with only 179 officers and men. 30 men and officers were killed or mortally wounded. Their names are on the monument. 49 officers and men were wounded. Total casualties 79. This view was taken from the south facing north at approximately 4:30 PM on Saturday, April 26, 2008.

Colonel Cross was killed by a Confederate behind the large rock to the left of the monument, and to the right of the stop sign. The 5th New Hampshire monument was dedicated on July 2, 1886 at a cost of $600. The designer was Major L. Fred Rice of the 31st Massachusetts Infantry. The contractor was J. Frank Hunton of Concord, New Hampshire. It is made of Gettysburg Granite and Concord Granite. This view was taken from the east facing west at approximately 4:30 PM on Saturday, April 26, 2008.