In yesterday’s post, we showed you an 1880s William Tipton photograph of Stevens Hall. That photo contained an astronomical observatory (highlighted). We’ll show you where the old observatory was located in today’s post.This image was taken facing northwest by William Tipton circa 1880s. 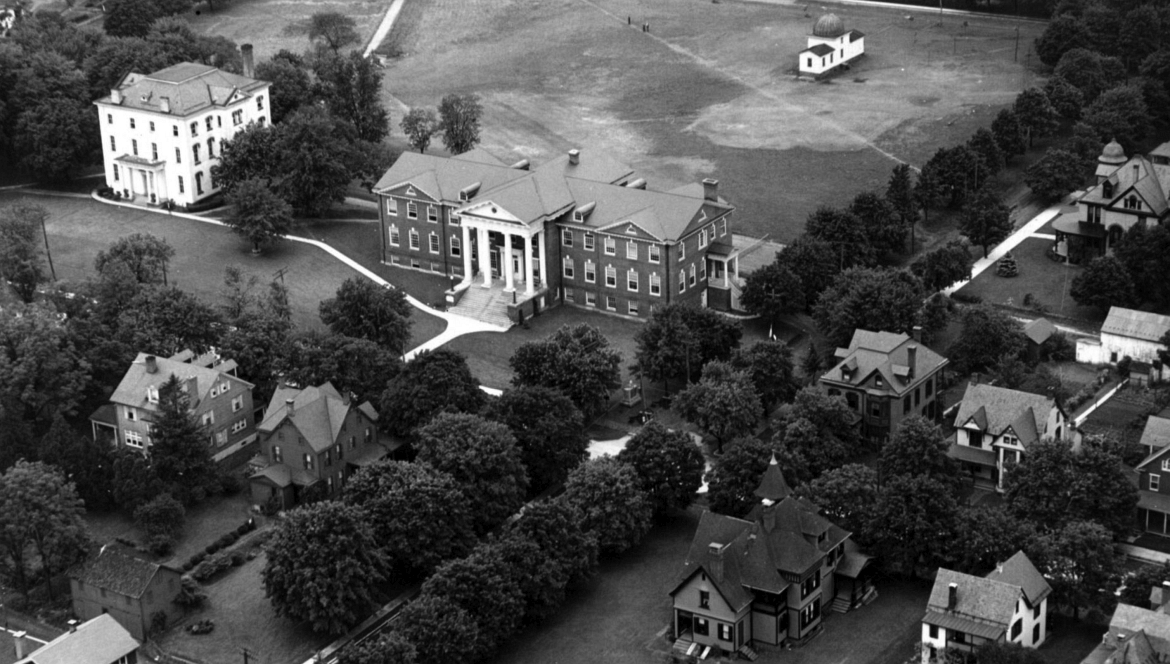 As you can see in this aerial view, the observatory occupied ground northwest of Stevens Hall (the building in the top left of frame). The building with the white columns next to Stevens Hall is Huber Hall. You can just make out a lawn tennis court behind it. Eagle-eyed viewers will also notice the monument to Heckman’s Ohio Artillery Battery, at the intersection of Carlisle Road and East and West Stevens Street. You can read about the actions of Heckman’s Battery here.This aerial photograph was taken southwest in 1925 by Gettysburg photographer William Tipton. 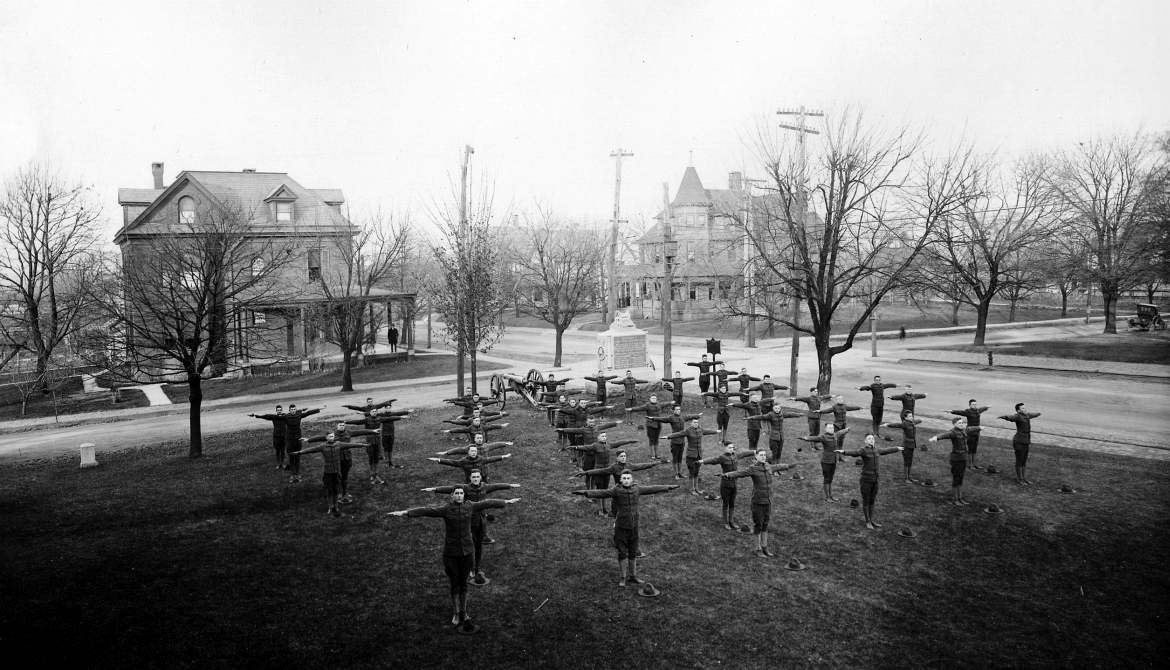 The college’s ROTC performing calisthenics by Heckman’s Battery.This photograph was likely taken on the steps of Huber Hall facing northeast circa the 1920s. 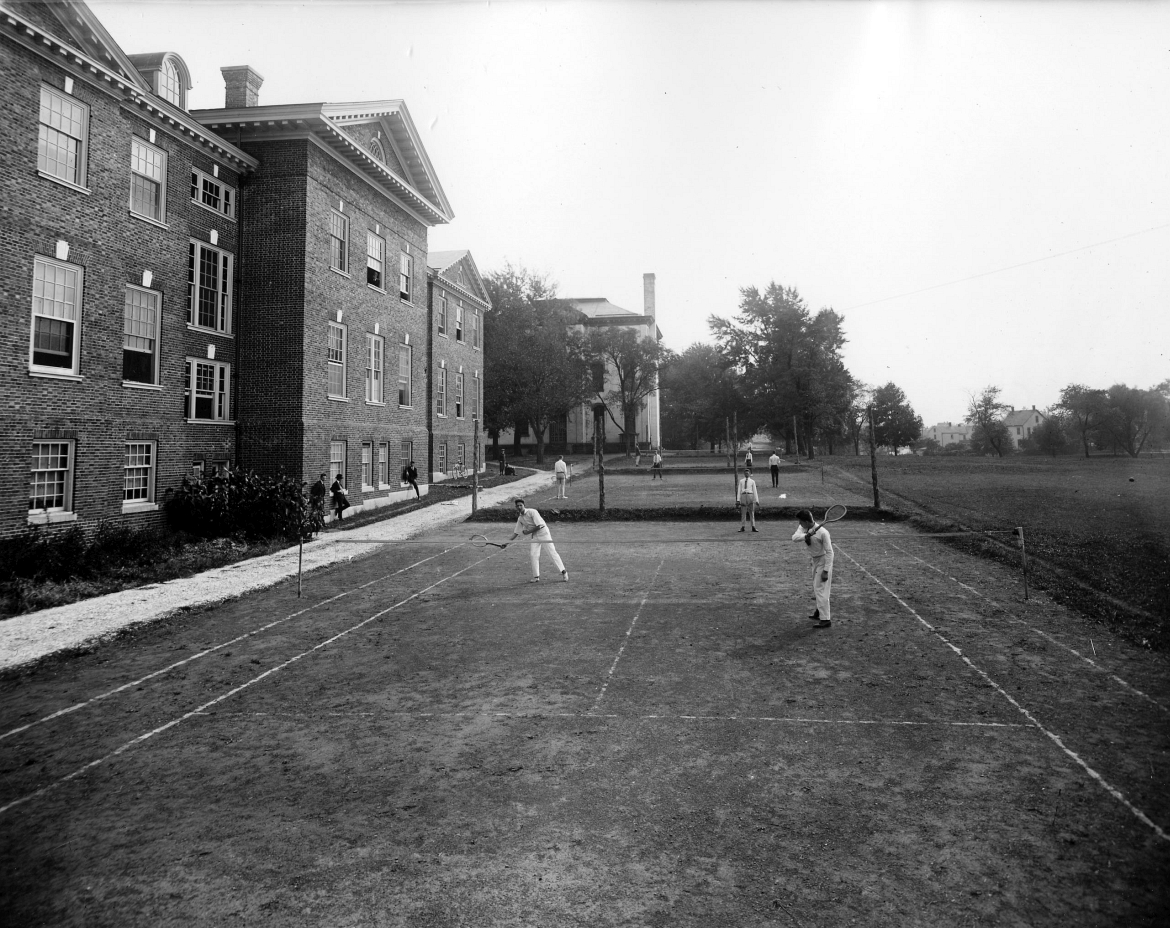 The lawn tennis courts that existed behind Huber Hall were also the subject of a 1920s Tipton photograph. Today this is a parking lot for Huber Hall. Stevens Hall is in the center background.This image was taken facing south circa the 1920s. 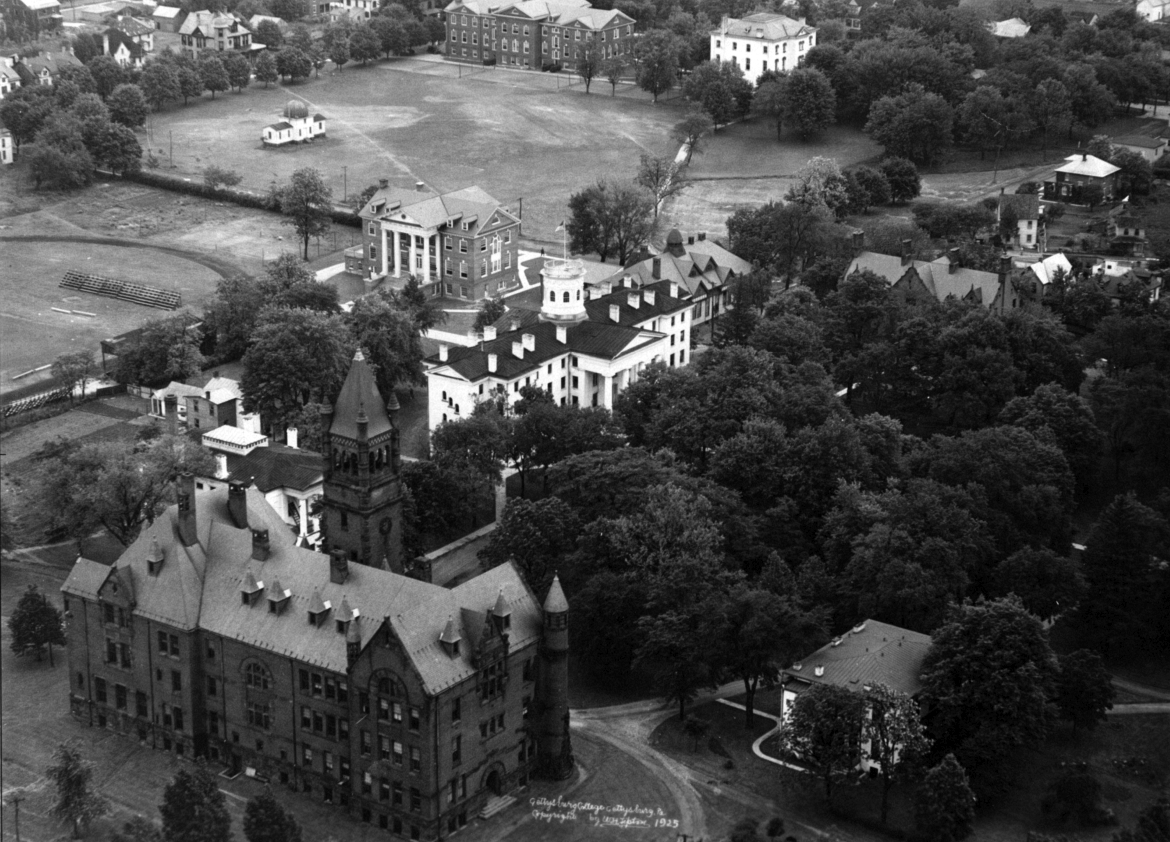 Another aerial view, showing the observatory in the top left of frame. The college purchased a telescope nine years before they would have the funds to construct the observatory. And oh what a telescope it was. From the 1867 description of the telescope: “A superior telescope has recently come into possession of the College, and will soon be mounted and ready for the use of students in astronomy. This telescope was made by Merz & Son, opticians, of Munich, in Germany. In it, an achromatic refractor of over nine feet focal length with an object glass of six-and-a-half inches aperture. It is furnished with five magnifying powers, varying from eighty-five to four hundred sixty times; with a complete set of sun glasses, a prismatic reflector, an annular micrometer, and a terrestrial eye-piece. The instrument has two divided circles, for reading off angles, of nine-and-a-half inches in diameter, finely graduated on silver to minutes of arc, and furnished with two venires and microscopes which read to four seconds each. Furthermore, this telescope has already done good work in astronomical science, and has been pronounced, by the first astronomers in the country, to be a perfect instrument.”This image was taken facing northeast by William Tipton in 1925. 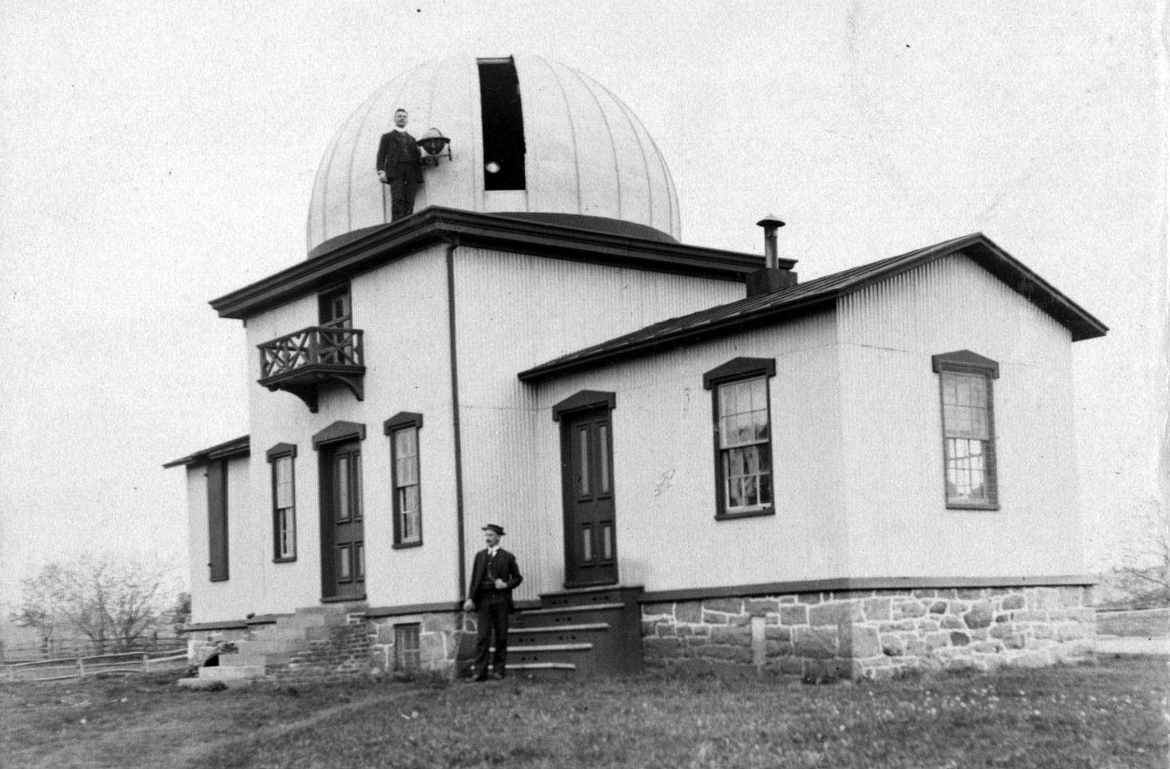 While the college was attempting to raise money to construct the observatory, they loaned the telescope to the United States Navy. Naval astronomers took the telescope to Iowa to observe a solar eclipse on August 7th, 1869. The telescope was damaged in transit. It took three years for the federal government to pay the college for the damage. By 1874 the college had enough money to build the observatory, and a Baltimore architect named William F. Weber was hired to draw up the design. A company from New Oxford owned by Elias Roth won the construction contract. The observatory was placed on a plot of land the college had acquired that year, which is today the location of Hanson Hall. This image was taken facing northwest circa 1890. 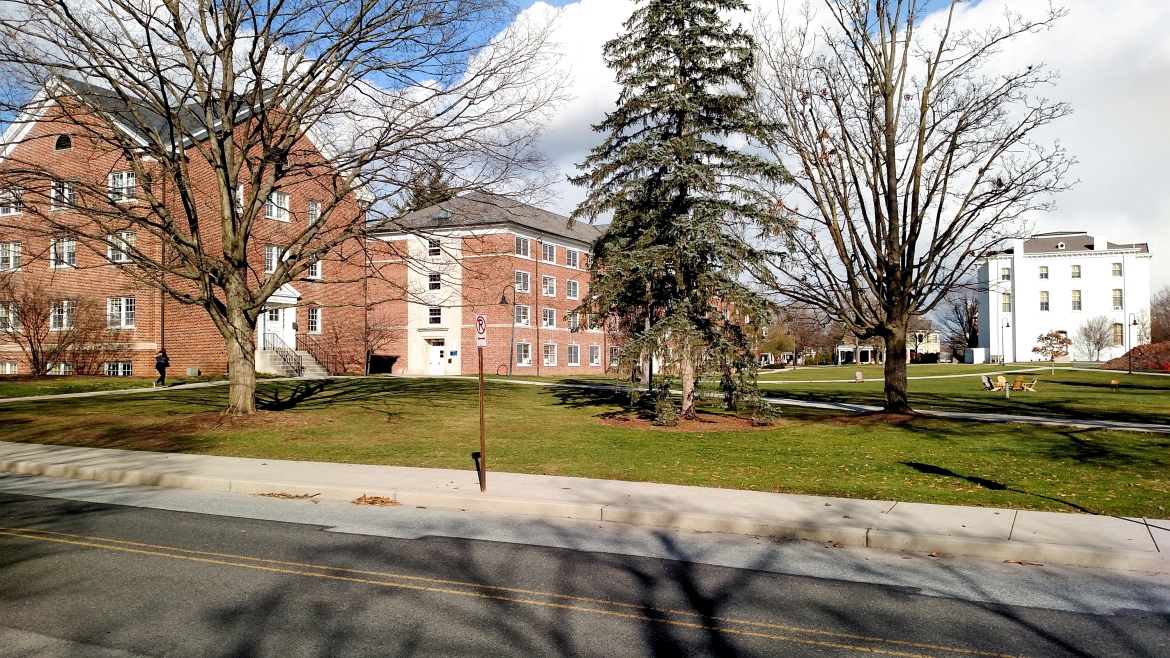 The location of the old observatory as it appears today. We’re standing on the west side of Washington Street. Hanson Hall is on the left, Musselman Hall in the center, and Stevens Hall can be seen in the distance to the right. All three buildings serve as residence halls for the college. On the south side of Hanson Hall you can see a set of steps. The observatory would have been to the right of the steps, occupying space between Hanson and Musselman.This image was taken facing northeast at approximately 3:30 PM on Friday, March 3, 2017. 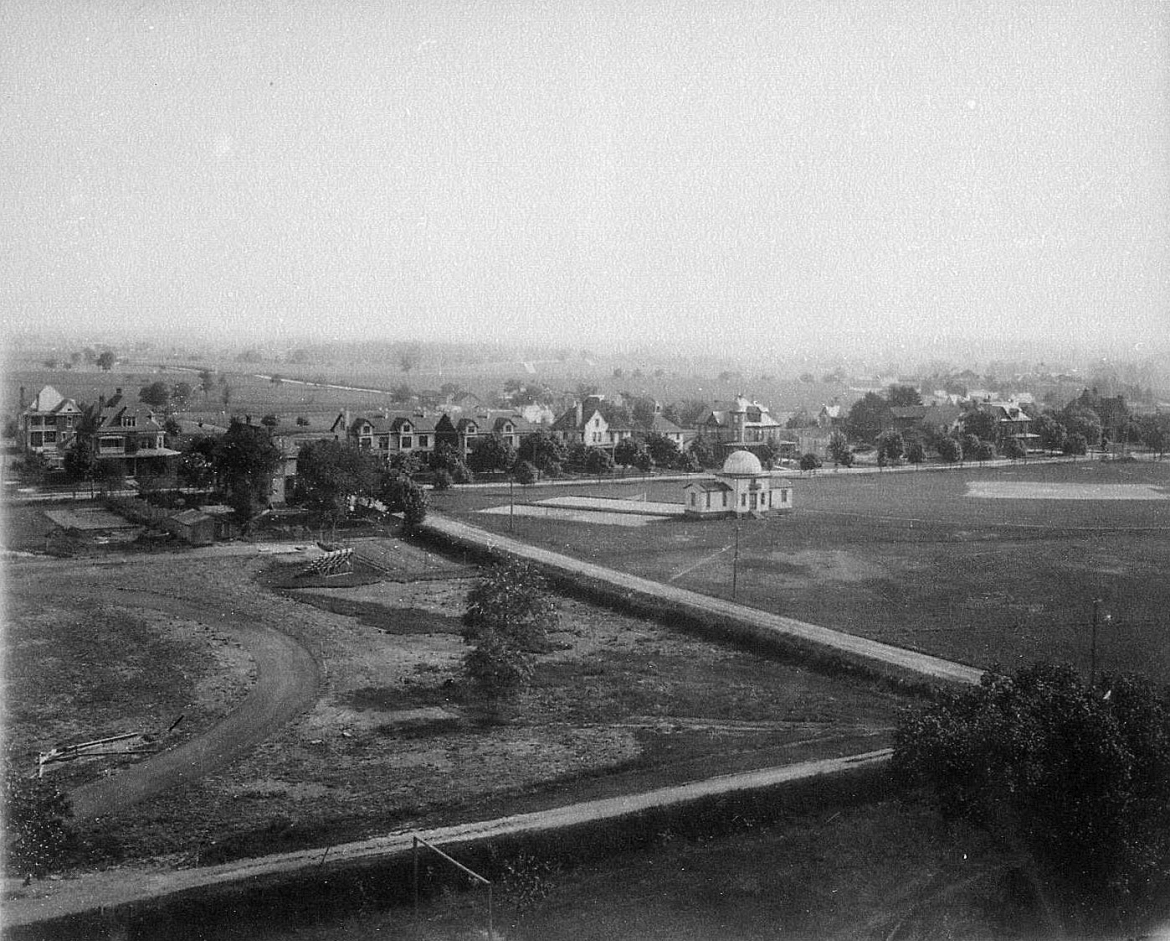 “The dome on the central section rested upon iron balls, which revolved in an iron groove and made rotation possible either by hand or by a wheel, so that the whole visible hemisphere of the sky may be laid under contribution at any time […] The telescope and several other pieces of equipment were mounted on masonry piers resting on solid rock. The frame of the building itself was covered by corrugated and galvanized iron and was all done for the reported cost of $3,406.”This image was taken facing northeast in 1911 by William Tipton. 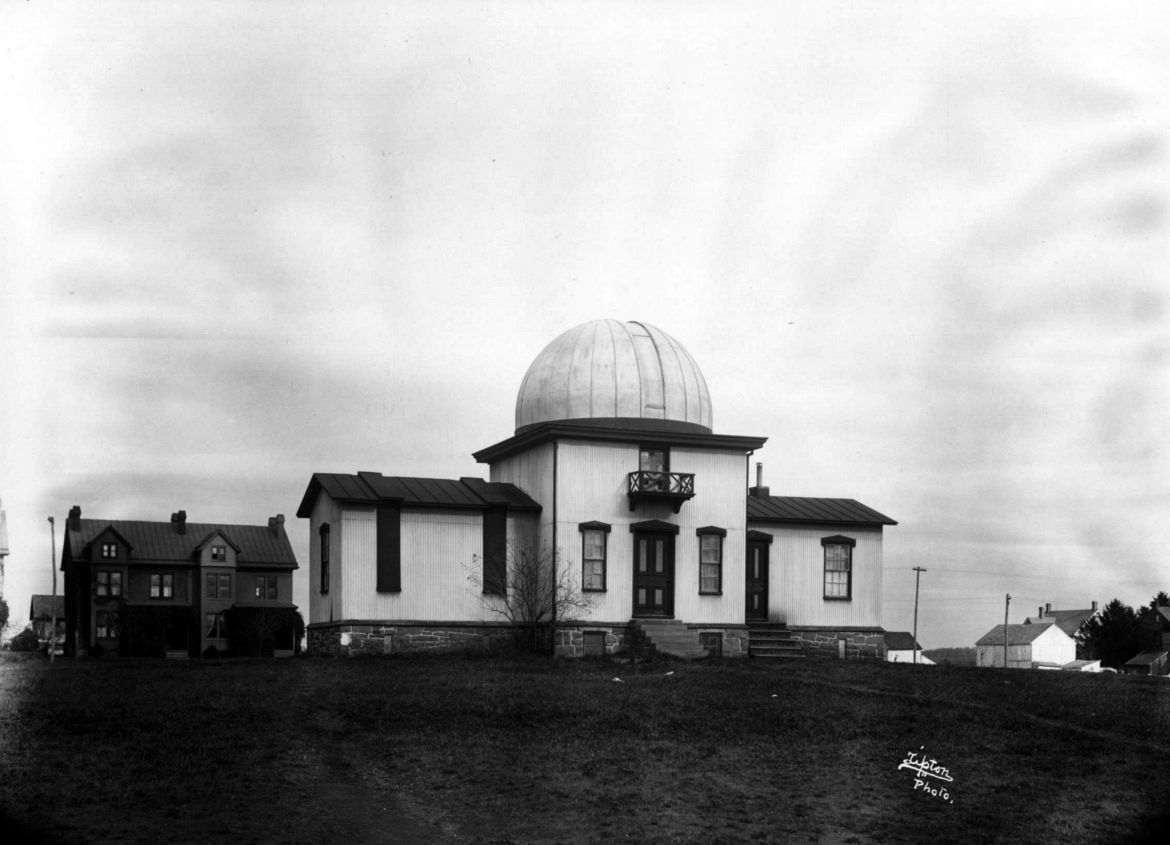 For a school the size of Gettysburg College, the acquisition of a telescope and observatory was a big deal. They were proud of it. However: “The technological innovations and money did not keep some students from sneering at the observatory. Charles Glatfelter writes that in one instance, a prep student asked, ‘Hey chum, what fur [sic] house is that over there with a balloon on it?’ It was also not uncommon for visitors and locals to believe that the building was a gymnasium due to the large dome, which to the uneducated eye may have appeared to resemble some sort of ball.”This image was taken facing north circa the 1900s by William Tipton. 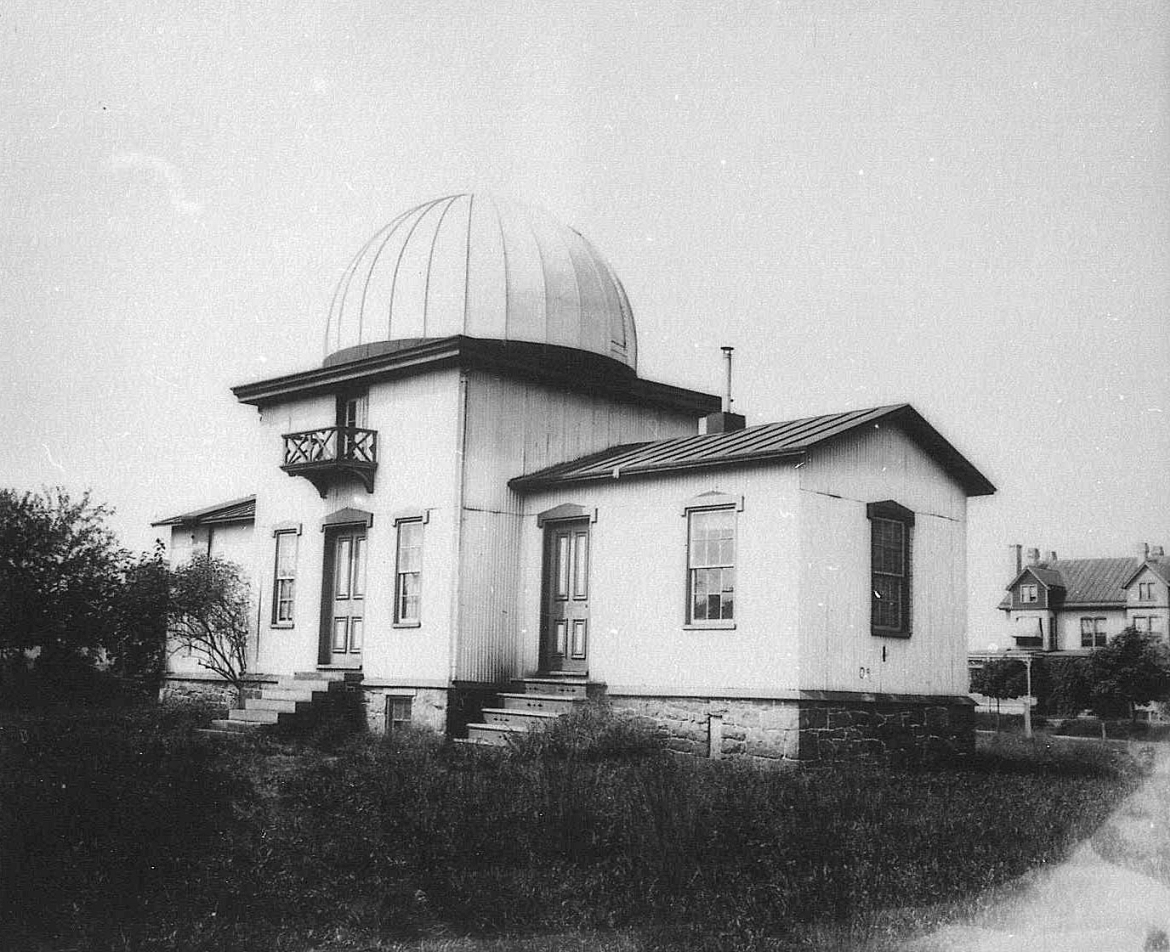 The two rooms (or the east and west wing of the building) each had different purposes. Until 1900, one wing housed two students who lived in and took care of the building. The other wing housed an instrument to determine time and latitude while looking through the telescope. By the early 1900s the college had banned students from living in the observatory. The building fell into disuse and disrepair, causing some to refer to the building as a “pest house.” When a particularly bad contagious disease spread across campus in 1917, the building was used as a temporary infirmary. The building was demolished by the college’s administration in 1925 and the telescope was moved into storage.This image was taken facing northwest circa the 1910s by William Tipton. 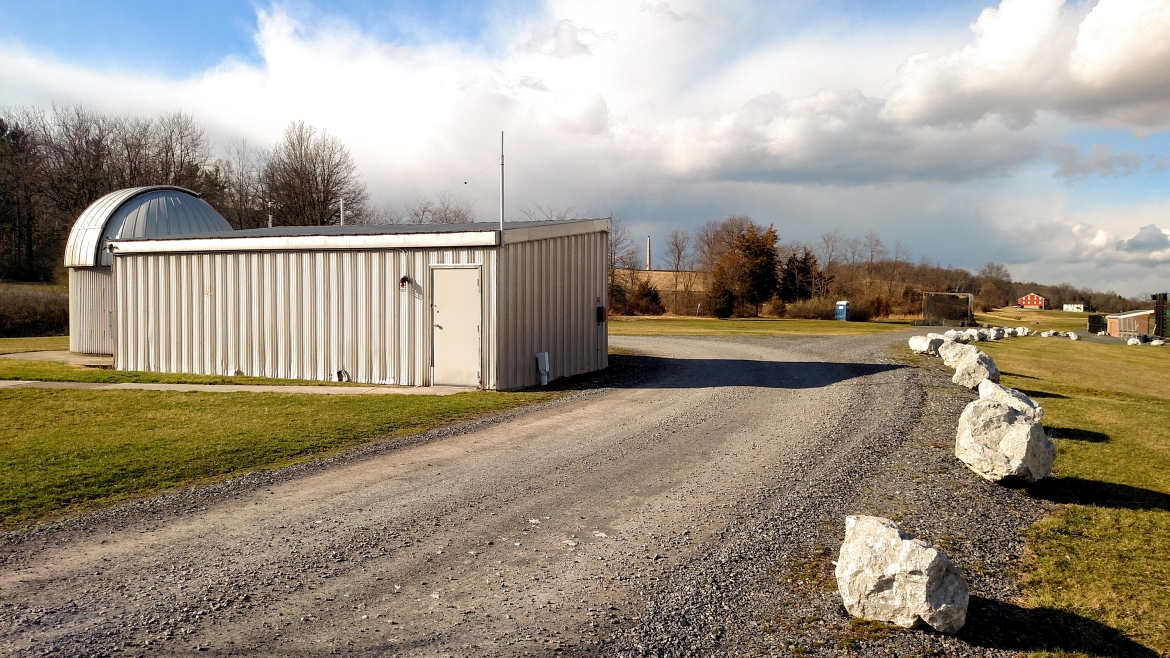 In 1967 the college purchased land near Oak Ridge from the Reading Railroad Company. A physics professor hired in 1966 was disappointed that the school didn’t have an observatory. A member of the Royal Astronomical Society, the professor convinced the college president to build one. It’s located next to a softball field today (whose third base dugout can be seen in the right of this photograph). The old telescope was brought out of storage and was used by students to photograph a solar eclipse in March of 1970. The monument to the 83rd New York Infantry regiment can be seen in the background along Oak Ridge.This image was taken facing north at approximately 3:30 PM on Friday, March 3, 2017. 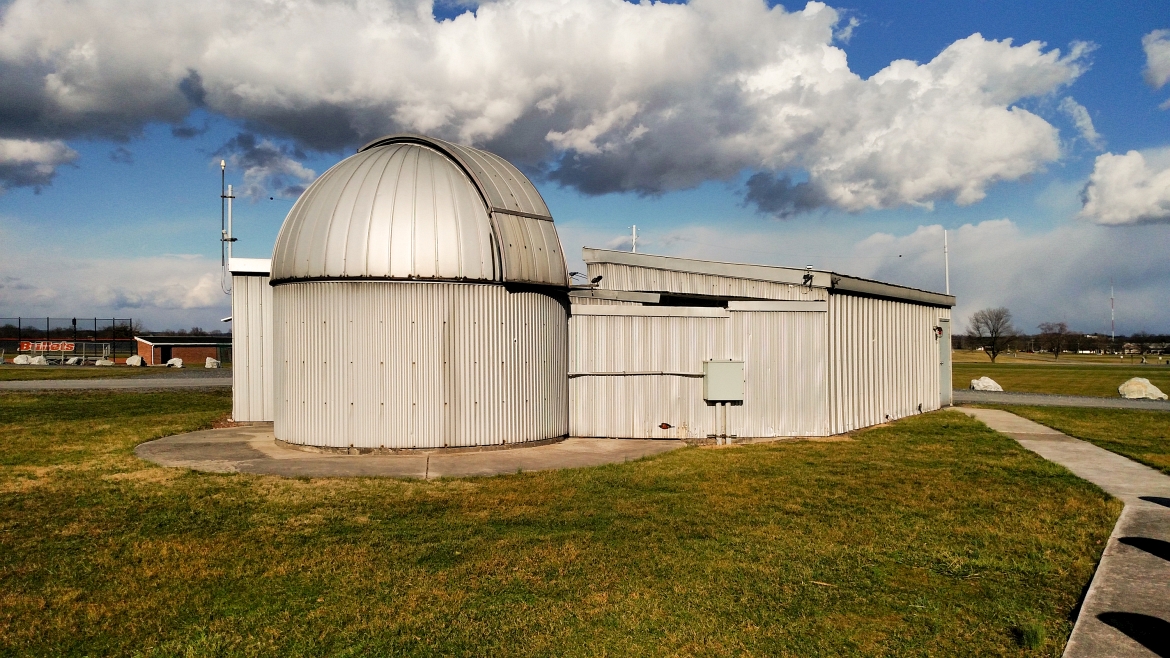 A new telescope was purchased in the 1970s, and today, the observatory contains at least four telescopes. The observatory is part of the land easement between Gettysburg College and the National Park Service. Because it predates the agreement (which requires the college to keep the land in this area as playing/open fields), the observatory was grandfathered in.Howard Avenue can be seen in the right background of this photograph. This image was taken facing east at approximately 3:30 PM on Friday, March 3, 2017.