The Gettysburg Sketches of Edwin Forbes

Edwin Forbes was a staff artist for Frank Leslie’s Illustrated Newspaper (sometimes also referred to simply as Frank Leslie’s Magazine or Leslie’s Weekly) during the Civil War. Hired as a 22 year-old in 1861, he was assigned by Leslie to cover the Army of the Potomac in 1862, and did so until the Siege of Petersburg in 1864, also spending time with other Union armies. He was on-hand to witness the battles of Cedar Mountain, Second Battle of Bull Run (Second Manassas), Antietam, Chancellorsville, Gettysburg, the Wilderness, and Petersburg. Today we’ll show you a few selections from his Gettysburg sketches.

Though little is known about Forbes’ early life, he did publish a book titled An Artist’s Story of the Great War in 1890, five years before his death. During his time with the Army of the Potomac, he quickly learned that he would not be able to get too close to battles without endangering his life. This detail of the first image (which can be enlarged further by clicking on it) shows us what Forbes’ process was like. His sketches, which were ultimately turned into engravings for publication, or chromolithographs/oil paintings that he would produce at a later date, are filled with brisk details or notations about the scene.
Not being able to get dangerously close to the battle often meant using landscapes taking during his sketches for more fabricated images in a final painting. In the sketch of this painting, the scene was of the July 4th reconnaissance work being performed by Sykes’ 5th Corps.  In the oil painting, we are now witnessing “Attack on Little Round Top held by the 5th Corps commanded by General Sykes,” and a supposed Confederate line of battle. 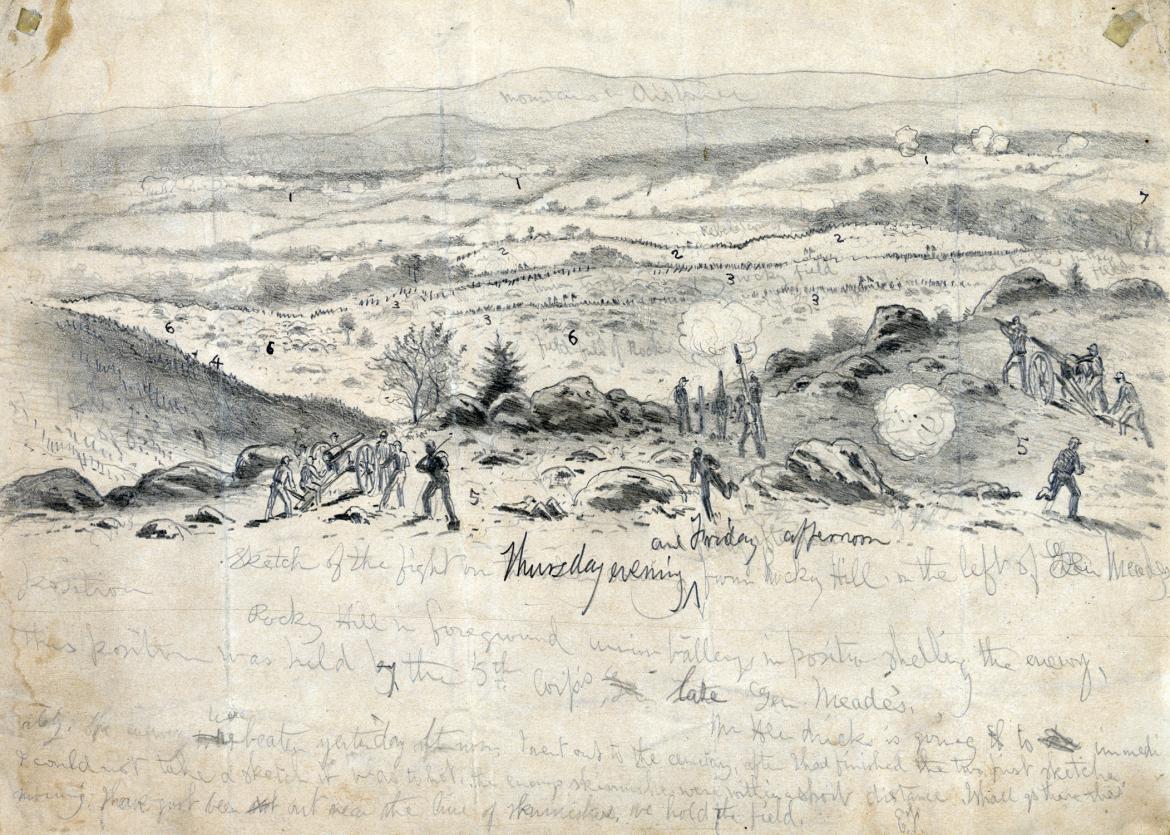 We are now on top of Little Round Top, in this sketch, “The battle of Gettysburg. View from the summit of Little Round Top. The advance of Genl. Longstreet’s Corps on the Union position (5th Corps) on Little Round Top, Thursday evening and Friday afternoon.” Forbes’ own notes at the bottom of the sketch (which you can read better by enlarging this image) describe it as “Sketch of the fight for […] the Rocky Hill on the left of General Meade’s position.” This is a more reasonable vantage point for Forbes to have during actual fighting, and this sketch is a composite of what Forbes was able to see on July 2nd, and what his notes suggest he witnessed of Union batteries on Little Round Top that participated in the Union defense of Pickett’s Charge on July 3rd. 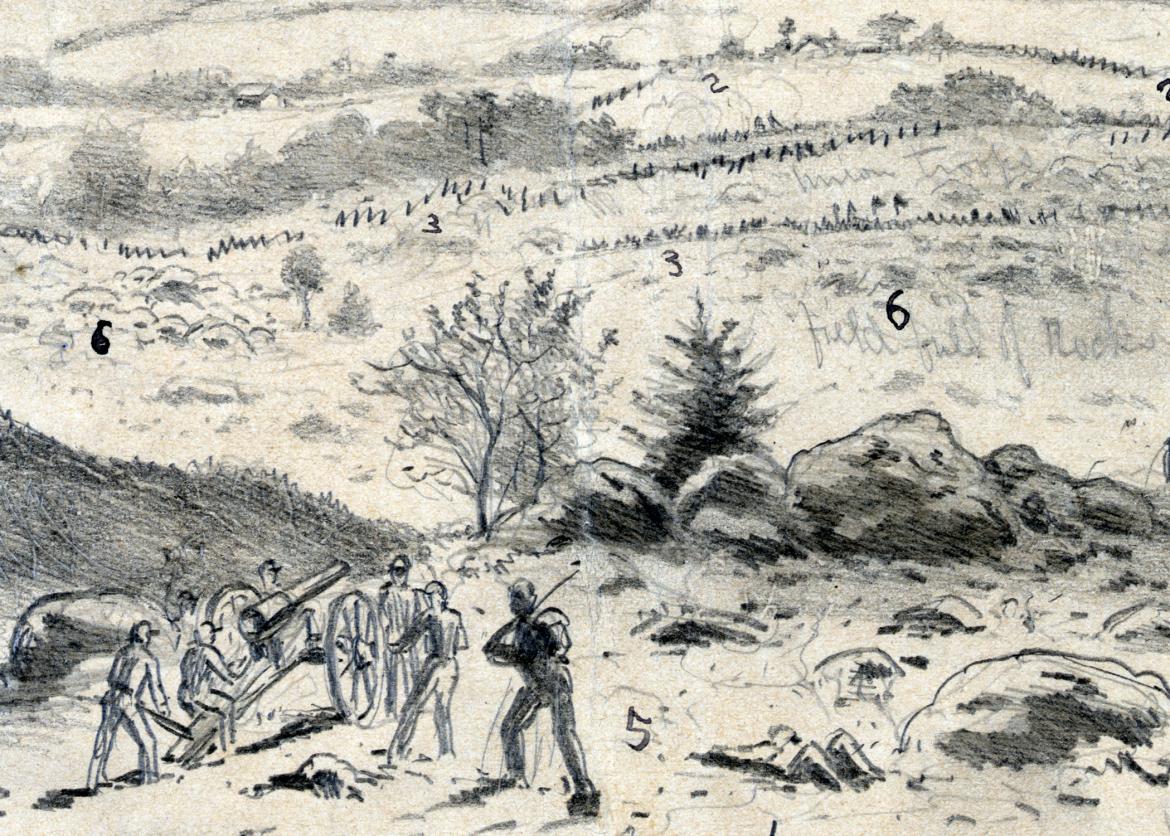 In this detail note Forbes’ “field full of rocks,” describing Houck’s Ridge.
In the oil painting of this scene, note the removal of running Union soldiers from the sketched version, and the removal of the body shown in the previous detail. In the sketch, most of the figures are drawn with angles, suggesting pace and movement, but here they are painted stoic and still, as they fire on the enemy in the valley below.
And of course, this realism in his sketchwork is what makes Forbes one of the most prominent and well-known of Civil War illustrators. This image is simply titled by Forbes as “Behind the breastworks on the right, Gettysburg, PA, 4th of July.”
A detail of this sketch. Because he lived and marched with the army, his sketchwork of the daily life of the Civil War soldier could convey camraderie and minutiae that the romantic 19th century oil painting of soldiers in battle did not.