THE BATTLE OF FONTENOY, MAY 11, 1745, by Horace Vernet; The first “Irish Brigade” in world history was comprised of 6 Regiments of Irishmen who secretly left Ireland [the “Wild Geese” as they were declared on ships’ manifests so the British government would not suspect these emigrants who left by the tens of thousands between ~1585 to ~1815 to serve in mostly the French, Spanish and Austrian armies in order to learn combat skills to aid their rebellion in Ireland against their British masters, occupiers and authors of the infamous “Penal Laws” imposed on their own subjects] to fight in the War of Austrian Succession. In the Battle of Fontenoy, British King George II’s army of British, Hanoverian, Dutch and Austrian soldiers commanded by the Duke of Cumberland fought French King Louis XV’s French Army [including their Irish Brigade] commanded by Marshal Maurice de Saxe. The battle [in modern day Flanders/Belgium] was a French victory due to Saxe’s use of his reserves, the Irish Brigade at the end of the day. [http://en.wikipedia.org/wiki/Battle of Fontenoy accessed 7/11/11]. The British units which retreated in good order due to that assault lost some 20 cannon and two stands of colors included “the Coldstream Regiment of Foot Guards [which] is the oldest Corps of continuance existence in the British Army.” [The British Army website, www.army.mod.uk/infantry/regiments/7928.aspx accessed 3/7/2011]. Furthermore, “Although the British Army fought well at Fontenoy, no battle honour was ever awarded as it was a defeat, not a victory.” [The Coldstream Portal Information, www.ShiningCapstar.com/austrian.htm accessed 3/7/2011]. The British Army observer with the Confederate Army of Northern Virginia during the entire Battle of Gettysburg, July 1, 2, 3, 1863 was Lieutenant Colonel Arthur Freemantle of Her Majesty Queen Victoria’s Coldstream Guards. It is precisely this battle, the close-in fighting and the presentation of the captured colors and prisoners by Saxe to King Louis XV and the Dauphin as well as this service of the French Army’s “Irish Brigade”[which also wore “redcoats” and white trousers] which influence Acting Major Thomas Meagher at First Bull Run and later drove General Meagher to insist that the Irish Brigade in the US Army of the Potomac arm itself with the Model 1842, Springfield .69 caliber smoothbore, buck and ball musket. Faithful photographic reproduction of an original two-dimensional work of art, The Battle of Fontenoy, May 11, 1745 by Horace Vernet, in the Public Domain {{PD-US}}.

In today’s Irish Brigade Post, Gettysburg Licensed Battlefield Guide Emeritus John Fitzpatrick shows challenges of firing in line of battle, and discuses the other, “Wild Geese” Irish Brigade in history and that relationship to the Battle of Gettysburg.

This map shows the location of the Irish Brigade videos. Video #1-#18 were shown in our previous posts. Videos #19-#20 were taken near the southwest corner of Rose’s Wheatfield. Video #21 was taken near the top of the Stony Hill along Sickles Avenue. This map was created facing north at approximately 11:00 AM on Saturday October 29, 2011. 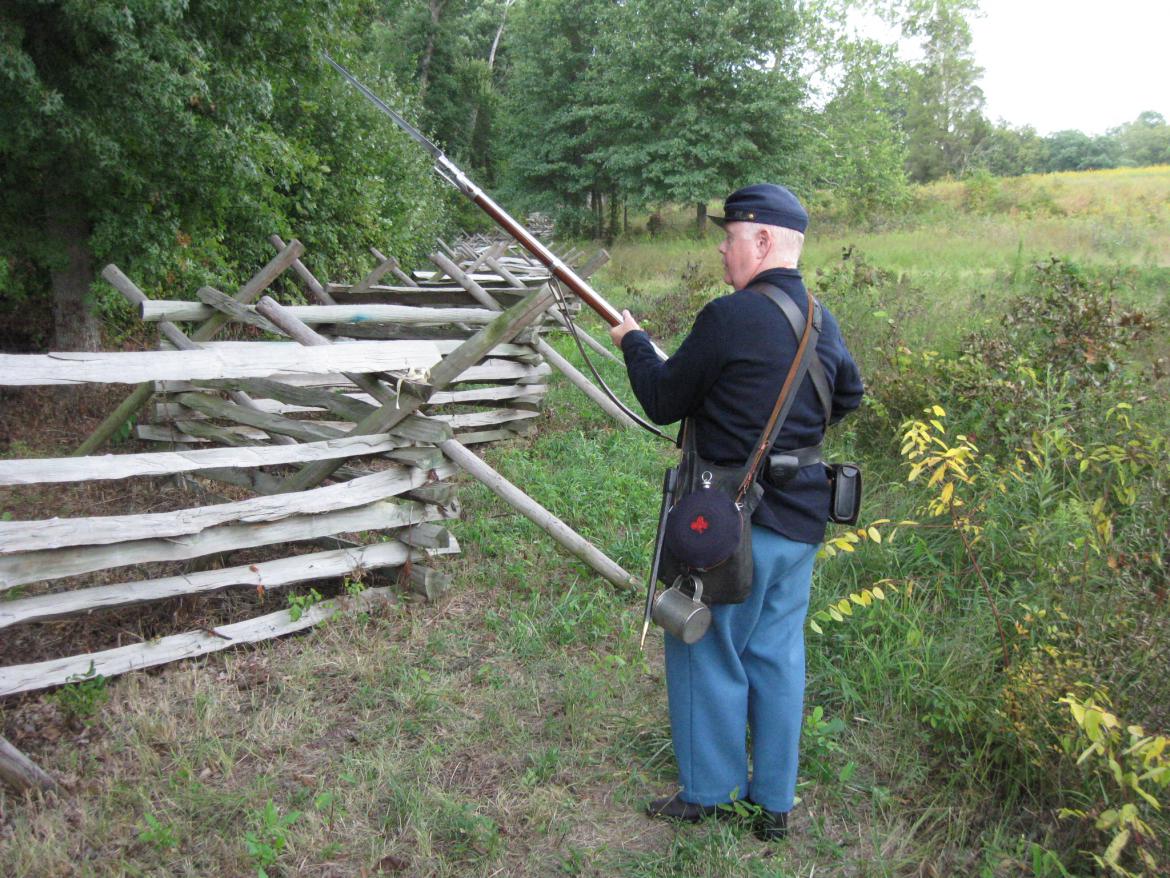 Gettysburg Licensed Battlefield Guide John Fitzpatrick is the host for this series on the Irish Brigade. He is standing in Rose’s Wheatfield (the Wheatfield) dressed in a typical uniform worn by veteran soldiers of the Irish Brigade. He is facing in the general direction which the Irish did when they attacked South Carolinians on the Stony Hill on the afternoon of July 2, 1863. This view was taken facing northeast at approximately 5:00 PM on Thursday, August 25, 2011.
In Video #19 (Videos #1-#18 were shown in our previous posts) Gettysburg Licensed Battlefield Guide John Fitzpatrick demonstrates the firing position from the front rank and the rear rank of a line of battle. He also points out the complications arising from the rear rank soldier firing his weapon closely to the soldier in the front rank. This view was taken facing southwest at approximately 5:00 PM on Thursday, August 25, 2011.

Licensed Battlefield Guide John Fitzpatrick is carrying a Springfield .69 calibre musket with a bayonet attached. This weapon was carried by a majority of the units in the Irish Brigade. The Irish had their bayonets fixed to their weapons as they marched to the Wheatfield on July 2, 1863. This view was taken facing northeast at approximately 5:00 PM on Thursday, August 25, 2011.
In Video #20 Licensed Battlefield Guide John Fitzpatrick explains how the Irish Brigade had their bayonets fixed as they fought in the Wheatfield, and the challenges from having a bayonet attached to a weapon while fighting in a line of battle. This view was taken facing southwest at approximately 5:00 PM on Thursday, August 25, 2011.

John Fitzpatrick has now moved to the top of the Stony Hill or “Loop” area which the Irish briefly held on the afternoon of July 2, 1863. Some peach trees in Sherfy’s Peach Orchard (The Peach Orchard) are visible in the center background, above the foliage in the foreground. This view was taken facing northwest at approximately 5:00 PM on Thursday, August 25, 2011.
In Video #21 John Fitzpatrick explains the history of the first Irish Brigade at the Battle of Fontenoy (Belgium) on May 11, 1745. This view was taken facing northeast at approximately 5:00 PM on Thursday, August 25, 2011.

For further information on the Irish Brigade, see The Greatest Brigade by Thomas J. Craughwell.