The Gettysburg cemetery is most widely recognized as a Civil War landmark, particularly as the site of the immortal address delivered by President Lincoln in 1863. But of the roughly 7,000 veteran graves, more than 1,600 are for veterans of World War Two, and nearly 500 of those men died during that war. 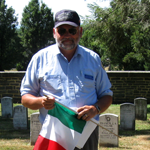